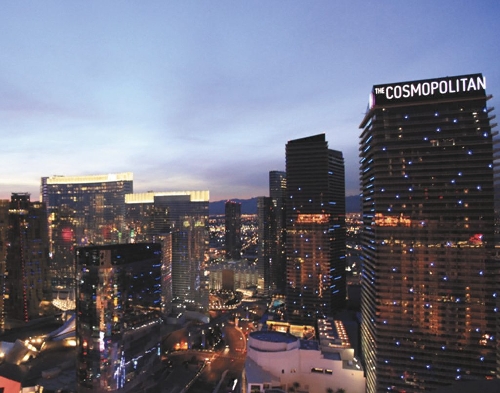 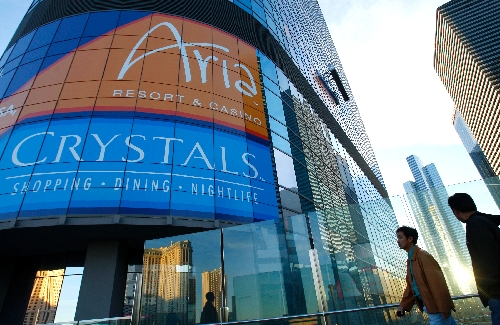 It’s the largest private development ever built in the United States, and a year after its opening, CityCenter still holds an outsized sway over the Las Vegas hospitality market.

It has been an adventure: From opening a passel of boutiques and earning more than 20 industry awards to scrapping an unfinished tower and writing down the property’s value, CityCenter, which turns 1 on Thursday, has provided its share of ups and downs for local gaming observers to follow. Both its successes and its stumbles offer important lessons and indicators as the city prepares to welcome yet another megaresort in The Cosmopolitan of Las Vegas, which is scheduled to open Wednesday.

At least a few of CityCenter’s highs and lows have come from the nation’s economic travails, which cut deeply into local spending among tourists and residents alike. Those struggles make it tough to evaluate CityCenter’s success.

"You’re judging the property’s performance during the worst economic downturn in Southern Nevada’s history, and in the nation’s modern history," said Jeremy Aguero, a principal in local research and consulting firm Applied Analysis. "That seems to me to be an unfair landscape for a long-term judgment."

Still, tracking CityCenter’s roller-coaster story offers clues to the market’s direction as The Cosmopolitan prepares to open next door.

Jim Murren, chairman and chief executive officer of CityCenter developer MGM Resorts International, said the megaresort has performed admirably in some of its most important measures. Especially crucial, Murren said: CityCenter has generated new customers for the resort operator, rather than siphoning off big numbers of patrons from the company’s nine other Strip properties.

"I would say CityCenter has been a very solid performer for us lately, and it certainly has been impressive, I think, given the environment that it has been in and the fact that it has been brand new," Murren said Monday. "For it to build its market share and for it to be profitable and not to have cannibalized the existing resorts we owned, I would say it’s been very positive."

What is more, none of CityCenter’s stores, either inside the 4,004-room flagship Aria or at the Crystals shopping center, has closed.

Crystals has added nearly 30 shops since it opened with 20 boutiques on Dec. 3, 2009. Among the additions: jewelers Cartier and Tourbillon; clothing and accessories stores Hermes, Lanvin, Prada and Gucci; and restaurants Mastro’s Ocean Club, Social House and Puck Pizzeria/Cucina.

CityCenter has collected an armload of awards and honors, including kudos from the James Beard Foundation, magazines Conde Nast Traveler, Esquire and Food & Wine and travel website Orbitz. CityCenter won plaudits for everything from its cuisine to its interior design to its room technology. Travel club AAA gave both Aria and Mandarin Oriental its highest Five-Diamond praise — an exceedingly rare honor in a resort’s first year — and Aria nabbed top honors from the Green Key Eco-Rating Program, designed to highlight hotels committed to improving environmental performance.

And though Murren acknowledged that Aria’s occupancy started out lower than MGM would have liked, bookings inside the hotel have risen steadily, from 63 percent in the first quarter to 82 percent in the third quarter. The hotel-casino is selling out on some weekends, and its occupancy levels equal those of any local resort, Murren said.

"We’ve achieved that without sacrificing our rates," he said. "Had we simply wanted to fill the building, we could have heavily discounted and filled up to 100 percent right away. But that wasn’t our business strategy, and we’re glad we didn’t do that."

Perhaps most importantly, after two quarters of losses totaling $383 million, CityCenter posted a profit in the third quarter, bringing in net revenue of $413 million and cash flow of $52.4 million.

Murren said the positive trends probably will continue in 2011, as Aria’s convention bookings for the year look "extraordinarily strong."

On the flip-side, CityCenter has experienced its share of stumbling blocks.

That newfound cash flow? Credit it at least in part to "dramatic" write-downs of CityCenter’s value, Aguero said.

MGM wrote down CityCenter’s worth from $4.9 billion in October 2009 to $2.6 billion in August. CityCenter cost about $8.5 billion for MGM to build, and the operator still faces $13 billion in long-term debt. By the end of the third quarter, MGM had taken $600 million in impairment charges for reduced values, including a $279 million impairment on the unfinished Harmon.

The Harmon has grabbed its own headlines. Work on the hotel tower stopped after Clark County officials found that its structural work did not match building plans.

MGM executives said in November that it’s unlikely the Harmon will ever be finished; CityCenter Chief Executive Officer Bobby Baldwin called the building "the poster child for nonconforming work worldwide."

There have been other construction-related woes. Perini Building Co. filed $491 million in mechanic’s liens against CityCenter soon after the property opened, alleging that MGM hadn’t paid Perini’s subcontractors. MGM has negotiated payments with nearly all of the 223 vendors involved in the Perini action.

Nor can patrons ignore the shortened hours at many of CityCenter’s restaurants.

Amore Patisserie at the Mandarin Oriental is the only eatery that is shuttered. A sign outside said it’s closed for redevelopment, and Mandarin officials did not respond to an e-mail asking about future plans for the space.

But plenty of other restaurants, including Vdara’s Silk Road and Aria’s Bar Masa, Union and the SkyBox Sports Bar and Grill, are either closed two or more days a week or have dropped entire meal services, such as lunch.

Murren responded that resorts up and down the Strip see seasonal, temporary restaurant closings between Thanksgiving and Christmas.

The SkyBox is set to reopen on Christmas Eve as it ramps up for business in the first quarter thanks to the Super Bowl and other big sporting events.

And though Murren noted that MGM has not steeply discounted rooms at CityCenter, research from a gaming analyst does show some softness in the resort’s rates.

Robert LaFleur, managing director of gaming, lodging and leisure equity research at Hudson Securities in Connecticut, said Monday that CityCenter’s rates are flat to generally below where they were a year ago.

With the ups and downs, CityCenter drew attention for quirkier developments, from the Vdara "death ray" sunbeam that singed a Chicago attorney’s hair in September to the Hollywood-tinged management dust-up at actress Eva Longoria’s Beso Restaurant and Eve nightclub.

And we can’t overlook the quotidian changes: After widespread public feedback about the lack of places to sit, Crystals now has benches throughout, with more to come.

"We listen to our customers and guests, and that (the lack of seating) was an observation we took to heart," Murren said.

So for all those experiences, what does CityCenter teach the market on the eve of The Cosmopolitan’s opening?

For one thing, room rates have held up better at high-end properties than they have fared at midtier or budget hotel-casinos, LaFleur said. That could bode well for The Cosmopolitan, where rates are running as high as $300 a night.

Plus, the Strip’s big new developments can still grab headlines around the world. Even newspapers in Europe couldn’t resist the siren song of the "death ray" story, and publications worldwide turned to CityCenter time and again as they compiled lists of travel and leisure superlatives.

CityCenter was hours from bankruptcy in March 2009 when a last-minute, $200 million construction payment kept the project going after development partner Dubai World balked at further investments in the project.

The Cosmopolitan had its share of development woes too, with original developer Ian Bruce Eichner defaulting on $1 billion in project loans in 2008 and Deutsche Bank taking over to finish the $3.9 billion, 2,995-room resort.

"We’ve also learned, really since the birth of the modern resort here in Las Vegas, that if you build something compelling, with imagination and great execution, the public will respond positively to that development," Murren said. "That has happened decade after decade in Las Vegas, and I think we’ve proven it again with CityCenter."

What Aguero sees in CityCenter’s story is the very survival of the Strip market. Despite a severe recession in 2009 and economic torpor in 2010, Las Vegas managed to lure 36 million tourists who left behind $20 billion in the local market. CityCenter captured a significant share of that.

"The fact that the market survived the storm so far, and the fact that CityCenter and the balance of properties are coming out of the other side of the downturn, is sort of a success story in itself," Aguero said. "That’s not to say bringing on additional hotel rooms is what we want to do, and it’s not to say MGM Resorts and other companies don’t have challenges. But I think a fair number of people in 2008 and 2009 were writing off Las Vegas, and MGM especially, almost as a going concern."

The Cosmopolitan has a few advantages over CityCenter, Aguero said.

It will open during improved economic times, with unemployment numbers stabilizing and consumer activity picking up nationwide. That gives the property a perception edge, he said.

And while MGM was battling to keep CityCenter afloat financially in the months before its opening, The Cosmopolitan has been able to focus all of its efforts on a superior marketing and sales effort, he added.

"I think The Cosmopolitan is going to face a very competitive marketplace, and they are going to find themselves up against competitors who are constantly raising the bar," Aguero said. "But I think they have a product that is ready for the market."

After touring The Cosmopolitan, Murren agreed.

"I’m actually very optimistic for The Cosmopolitan. The property is quite beautiful, and there are some very special moments inside," Murren said. "I think the pre-opening campaign has been very clever and creative, and they’ve got some talented people working over there. I think it’s going to build on a momentum that we began about a year ago."