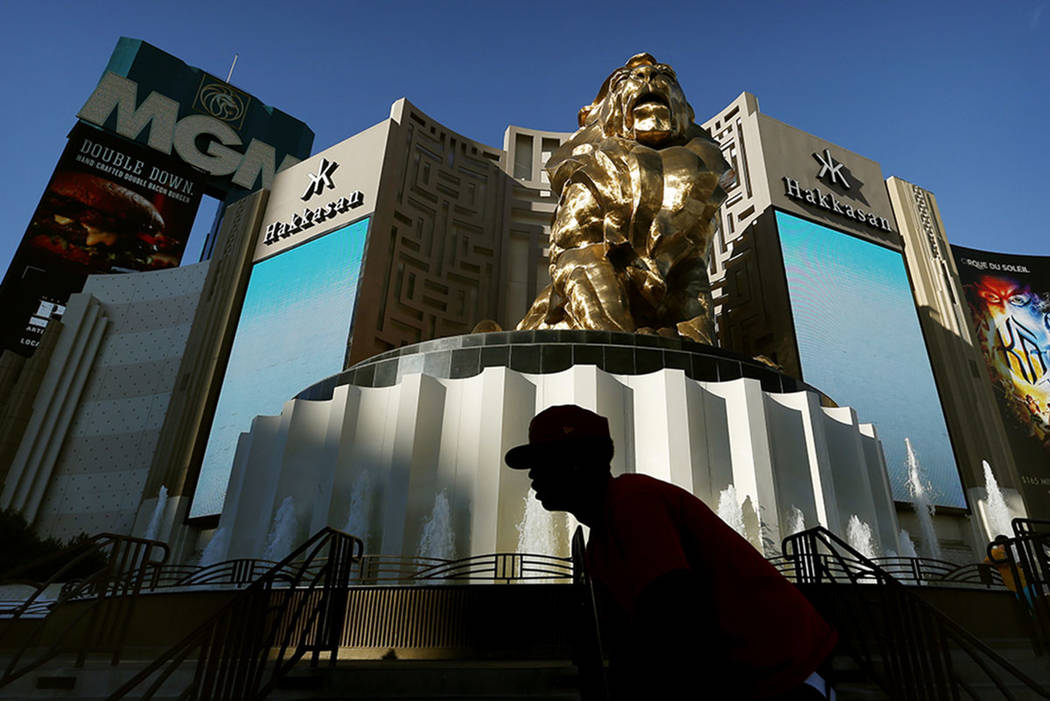 A man rides his bike past the MGM Grand hotel and casino in Las Vegas in 2015. (The Associated Press)

Despite falling short of analyst expectations in the second quarter, company management said the financial results “came in better than we expected.”

Responding to a question about whether the effects of the Oct. 1 shooting are still affecting the company, MGM Chairman and CEO Jim Murren said operations at Mandalay Bay are still “about 80 percent back” from where they were before the tragedy.

The dip in stocks was largely due to the company’s weak projections for the third quarter, which came on the heels of a rival company’s reported similar outlook Wednesday.

Murren said the company was forced to cut hotel room prices during the second and third quarters to draw the transient leisure market because conventions didn’t fill enough rooms.

“(For the third quarter) the all-time record citywide in conventions was in 2016. The second best was last year. The third best will be this year,” Murren said. “This year’s not a bad convention quarter. It’s just up against these two incredible comps (comparable circumstances) in the last couple of years.”

He said the company thought it could fill rooms by marketing to small-meetings groups, but when that failed, it cut hotel room prices.

Third-quarter results will be up against a tough comparison in 2017, when MGM hosted two boxing matches, including the high-profile Floyd Mayweather-Conor McGregor fight.

“The way we’ve been addressing it is to continue to bring content to Las Vegas. We brought in the Las Vegas Aces (WNBA basketball team), we sponsored the (National Basketball Association) Summer League last month. That’s going to be much bigger as an event next year than it was this year,” he said.

“We’re going to bring more content to the T-Mobile (Arena). The Raiders are going to finish the stadium in 2020. There’s an awful lot going on and there’s no cause to change the strategy when it has been working. What we need to do is when we have these pockets, do the best we can without degrading the customer experience, because if we do that, people won’t come back.”

He noted the opening of the company’s MGM Springfield property in Massachusetts later this month and high-end luxury accommodations opening at MGM Cotai in Macau by the end of the year.

He also said that the transition of its Monte Carlo property to Park MGM would drive revenue when that project is completed.

He said MGM also has positioned itself well with its recently announced collaborations with Boyd Gaming, technology provider GVC and the NBA.

MGM will work with Boyd to offer sports betting in states where the company doesn’t have a presence. The deal with the NBA will enable the company to market its properties through the league and also could provide an inside track toward a future franchise for Las Vegas thanks to its existing relationship with the league with the Aces and the growing Summer League presence.

As a result, Murren said the company would provide more conservative estimates on revenue per available room in the future.

“We all get frustrated over RevPAR (revenue per available room),” Murren said. “When we meet or exceed RevPAR, it’s no big deal. When we miss, it’s a big disaster. We’re going to be much more conservative in our RevPAR guidance. I don’t like calls like this.”

A survey of 15 Wall Street analysts had projected an average earnings estimate of 29 cents a share for the second quarter, with 13 analysts expecting an average revenue estimate of $2.96 billion.

Murren said fourth-quarter projections are better and the company will be able to take advantage of its recent capital expenditures to drive greater cash flow, which would be shared with investors in the form of dividends and stock buybacks.

MGM reported a 41 percent decline in net income to $123.8 million, 21 cents a share, for its second quarter that ended June 30.

After seeing the stock tumble 9.6 percent Wednesday to $28.35 a share, the issue dipped further at midday Thursday on heavy trading. At one point, the stock fell to $26.86 a share, a low for the past year.

Murren said MGM also is positioning itself to be a contender for a concession to build a resort in Japan.

“The recent passage of Japan’s Integrated Resort Implementation Act is another historic milestone and we believe we are well-positioned in that market,” he said.