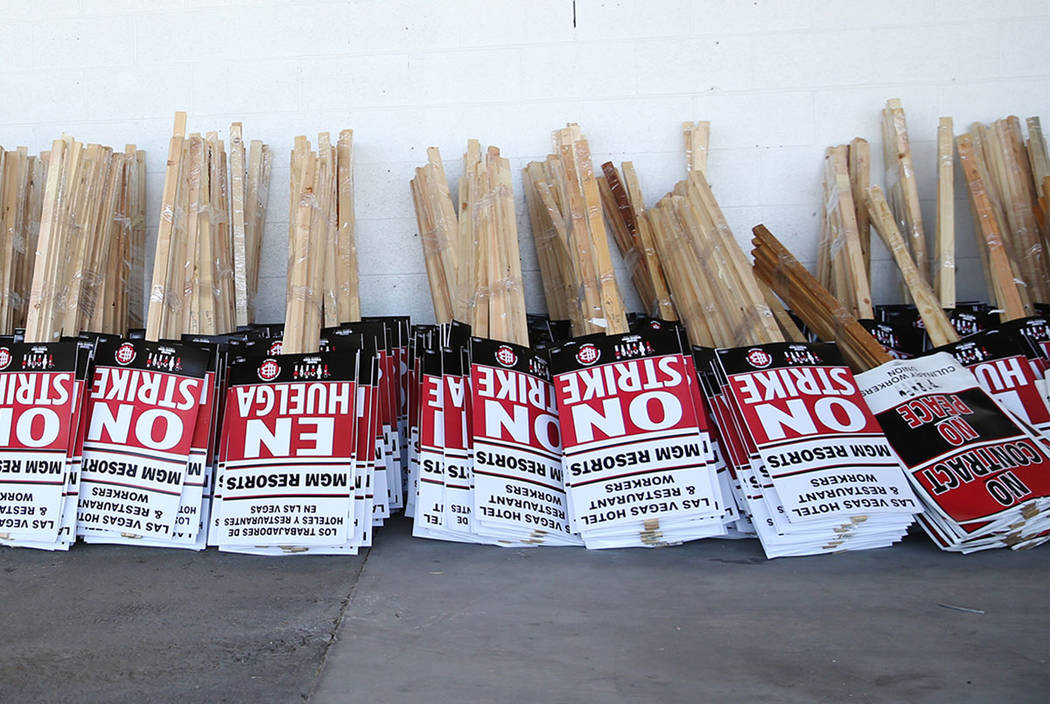 With the two largest employer groups on the Strip reaching tentative labor agreements over the weekend, Las Vegas tourists can rest assured that service at resorts won’t be disrupted.

“We are pleased to announce that a tentative agreement has been reached with @MGMResortsIntl,” Culinary Local 226 tweeted about 11:15 p.m. Saturday.

The deal heads off a potential nightmare scenario for MGM Resorts, whose business could have been disrupted as the Stanley Cup Final returns to T-Mobile Arena for Game 5 on Thursday.

Like the agreement reached Friday with Caesars Entertainment, details of the settlement weren’t disclosed. Rank-and-file workers will consider the contracts in as-yet-unscheduled ratification votes.

Culinary spokeswoman Bethany Khan and an MGM Resorts representative said a joint statement would be issued Sunday or Monday.

The tentative deal was reached a day after more than 100 union workers made hundreds of picket signs in preparation for a strike against MGM Resorts. Khan said the signs can be repurposed and recycled.

On Friday, the Labor Department reported that the unemployment rate in May fell to 3.8 percent, its lowest level since early 2000. The report also extends a nearly nine-year streak of job growth.

Casino workers were demanding an average annual increase in wages and benefits of 4 percent over the next five years. Union and hotel-management negotiators have been meeting on contracts since February.

The deals with MGM Resorts and Caesars Entertainment cover about 36,000 employees and 18 of the valley’s 34 resorts, where contracts for 50,000 Las Vegas hotel workers expired at midnight Thursday. The casino giants normally set the stage for other resorts to reach deals with unions.

The next largest hotel groups are Boyd Gaming Corp., Golden Entertainment and Penn National Gaming. Several Station Casinos properties have voted for union representation but have yet to draft initial contracts.

Among the largest properties where contracts have expired that are not a part of larger casino groups are the SLS Las Vegas, Treasure Island and the Westgate, as well as downtown’s Golden Nugget, Plaza, Four Queens, Golden Gate, the D Las Vegas, Downtown Grand and El Cortez.