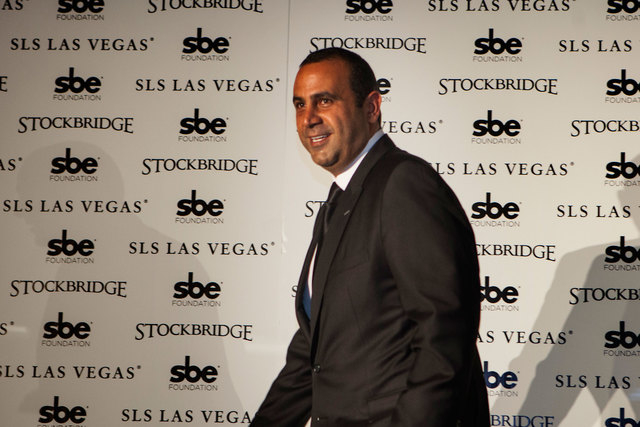 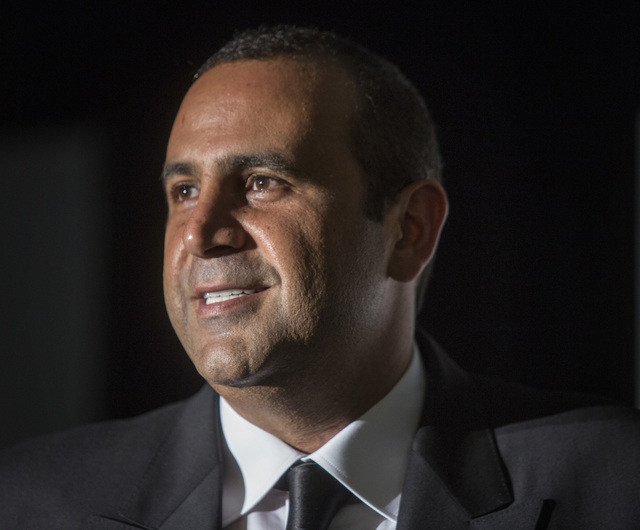 Sam Nazarian, CEO of SBE Entertainment, is shown during the ceremonial ringing of the bell at SLS Las Vegas on Friday, Aug. 22, 2014. (Jeff Scheid/Las Vegas Review-Journal)

The move comes two days before Nazarian, 39, considered the visionary behind the SLS Las Vegas, meets with the Nevada Gaming Commission over his request for a gaming license for the Strip resort.

Nazarian — CEO of Los Angeles-based nightclub operator SBE Entertainment — was grilled for three-and-a-half hours in Carson City on Dec. 3 by the Gaming Control Board, primarily over his dealings with an alleged extortion suspect that cost him $3 million, and evidence of recent drug use during a trip to Mexico.

Control Board members thought Nazarian was being evasive during the hearing and even brought up the possibility of voting to deny him a gaming license.

The Control Board recommended on a 2-to-1 vote that Nazarian receive a one-year limited license for the SLS with six conditions, including that he have no involvement with the oversight of gaming.

The move doesn’t change direction or management of the SLS Las Vegas, a $415 million renovation of the former Sahara.

“Sam brought the leadership, vision and creativity needed to revitalize the former Sahara into the new SLS Las Vegas,” Fancher said in a statement. “Following a recent hearing by members of the Nevada Gaming Control Board, we have made a collective decision to change the operating structure for the property, which Sam and I agree is in the best interests of the SLS Las Vegas.”

The casino opened in late August and Nazarian was only involved in the nongaming aspects of the property. Those duties will fall to Kreeger.

SBE will retain its 10 percent ownership in SLS Las Vegas and continue to operate the 1,620-room hotel, restaurants and nightlife venues at the property.

Nazarian will not oversee the venues.

Nazarian became interested in acquiring the Sahara in 2006 and brought Stockbridge in to finance the purchase. A management company ran the casino and SBE operated the nongaming aspects of the Sahara until 2011 when the resort was closed.

“I am extremely proud of what our SBE team has accomplished these past eight years, culminating in the August opening of the SLS Las Vegas, which has been a powerful catalyst for the revitalization of the north end of the Strip,” Nazarian said in a statement. “With the extremely talented executive team led by Scott Kreeger and our dedicated work force at the resort, I feel my professional efforts are more productively focused on the long-term growth of SBE brands throughout North America.”

SBE is considered one of the nation’s fastest-growing hospitality companies with revenue totaling $500 million annually, according to one industry publication.

SBE operates more than two dozen nightclub brands and restaurant concepts, nine of which were brought to the SLS Las Vegas. Nazarian opened the Hyde Lounge nightclub in the Bellagio in 2012. SBE has SLS hotels in Los Angeles, Beverly Hills, Calif., and Miami’s South Beach. New SLS hotels have been signed for the Middle East, New York City, the Bahamas, Philadelphia and Seattle.

Nazarian was questioned extensively by the Control Board for his dealings the past seven years with Derrick Armstrong, a convicted felon described by Los Angeles attorney Joseph Taylor as a “barnacle” and a “parasite.” Nazarian said Armstrong “seemed to show up” and demand money every time SBE had a major event.

Nazarian also admitted he used cocaine during an April “guys weekend” in Cabo San Lucas, Mexico, and called it a “one-time indiscretion.”