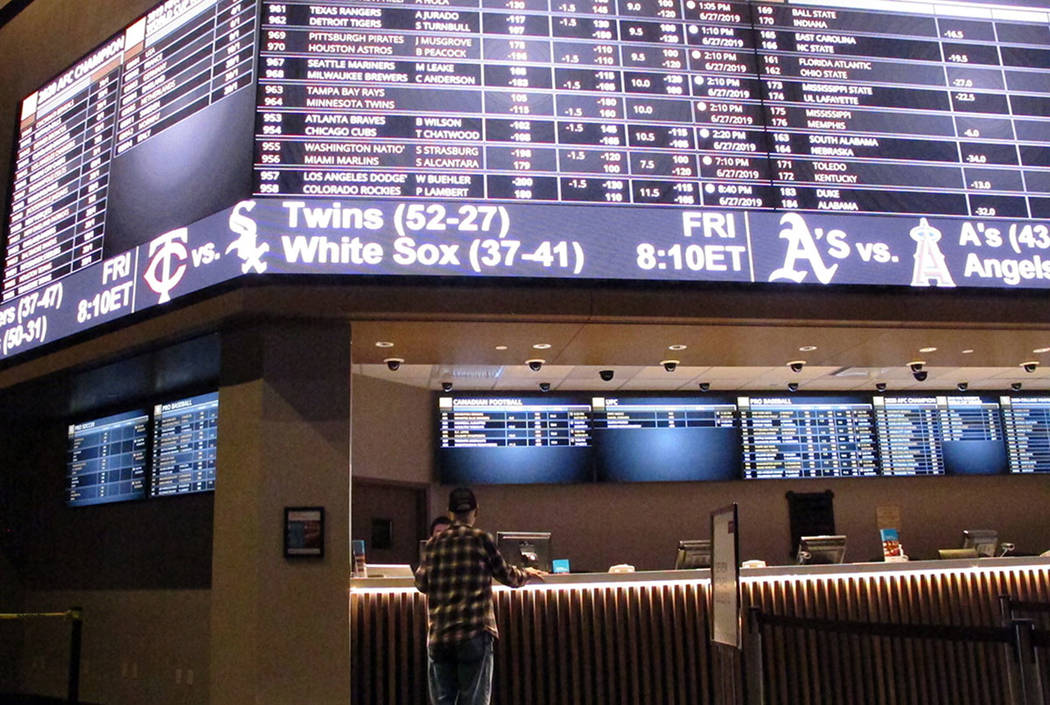 A customer ponders the odds at the new sportbook at Bally's casino in Atlantic City, N.J., in June 2019. (AP Photo/Wayne Parry) 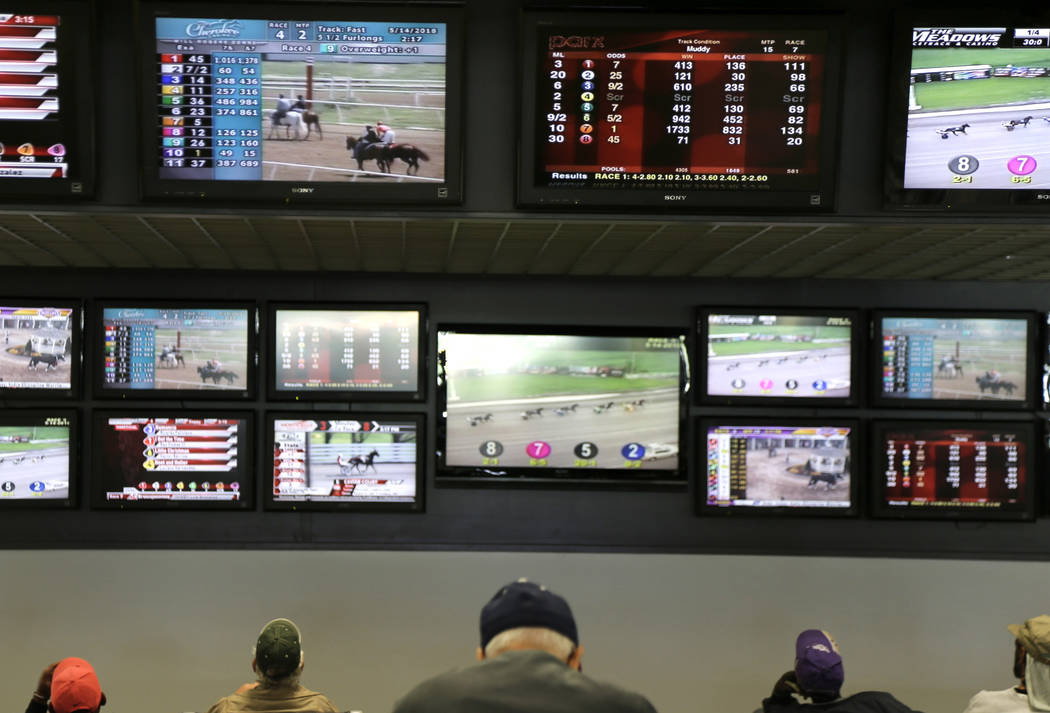 FILE - In this May 14, 2018, file photo, men watch horse racing on an array of screens at Monmouth Park Racetrack in Oceanport, N.J. New Jersey lawmakers are facing some key decisions Monday, June 4, as they race to legalize sports betting after winning a case in the U.S. Supreme Court. (AP Photo/Seth Wenig, File) 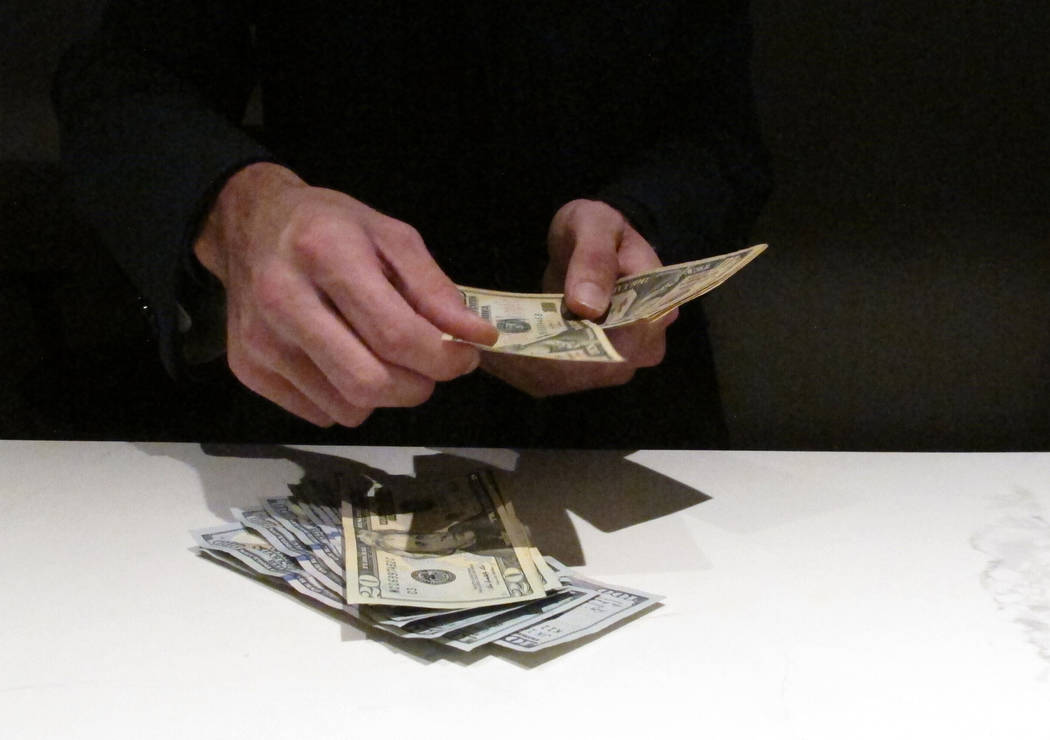 In this June 27, 2019 photo, a clerk counts money at the new sportbook at Bally's casino in Atlantic City, N.J. New Jersey's sports betting market continued to slow in July, taking in $251.3 million in bets, down from $273.2 million in June. (AP Photo/Wayne Parry) 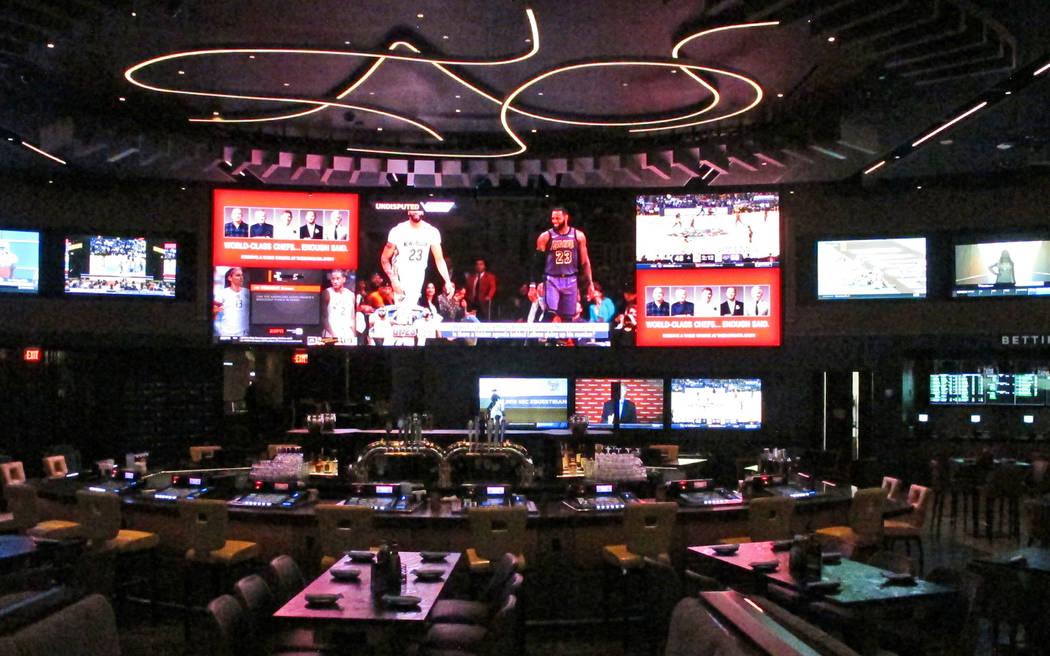 This Friday, June 28, 2019 photo, shows the Borgata casino's new sports betting lounge which is set to open to the public the following day in Atlantic City, N.J. The Borgata and Bally's are opening expanded sportsbooks worth more than $20 million. (AP Photo/Wayne Parry) 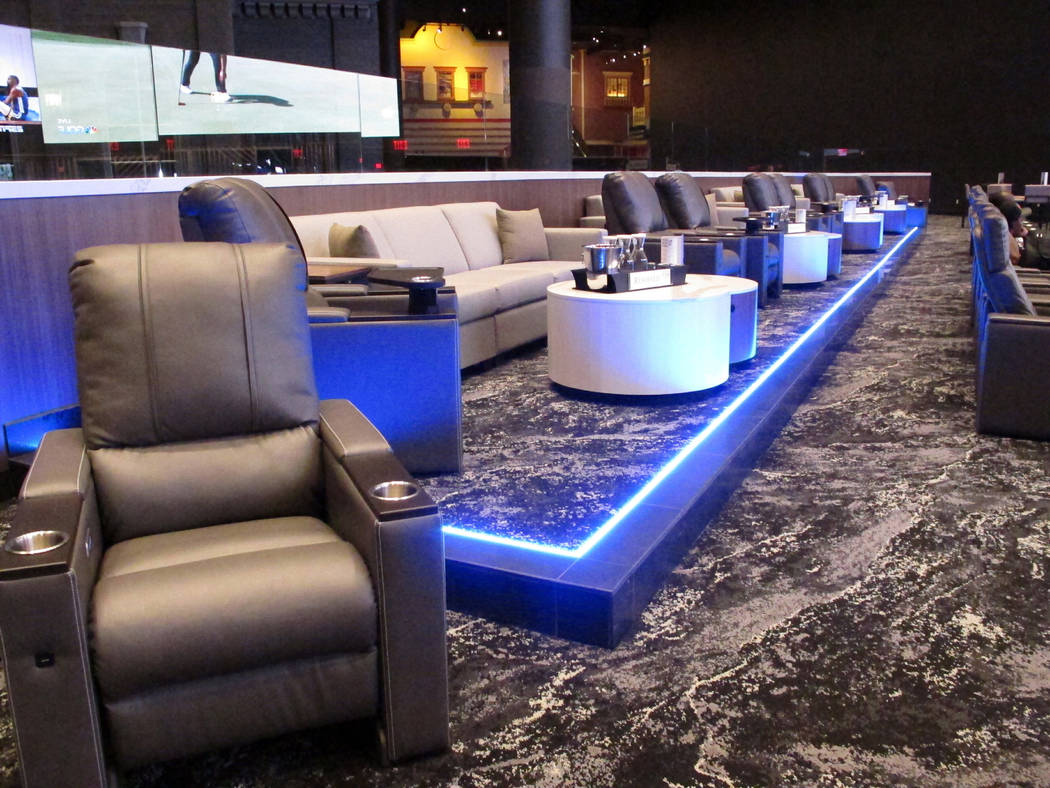 This Thursday, June 27, 2019 photo, shows a seating area in the new sportsbook at Bally's casino in Atlantic City, N.J. Bally's and the Borgata casino are opening new sportsbooks worth more than $20 million. (AP Photo/Wayne Parry)

When Eilers & Krejcik Gaming analyst Chris Grove set up a sports betting account in New Jersey, the process took a few minutes. It was as easy as pulling out his smartphone, verifying his identity and entering his credit card number.

It’s not so simple in Nevada.

“You need to create an account at an actual retail sportsbook,” Grove said. “The experience is markedly worse.”

When the Supreme Court overturned the Professional and Amateur Sports Protection Act last year, all 50 states had the option to allow sports betting. Nevada’s industry is referred to as the leader by many — the state first legalized the practice in 1949 — but experts say Nevada’s reluctance to allow remote sportsbook registration could give other emerging markets an opportunity to outshine Las Vegas.

“Nevada was the leader in being able to allow mobile wagering (first) dating clear back to the wager pager. But it has not taken the full leap with mobile registration,” said Brendan Bussmann, a partner at casino research firm Global Market Advisors. “In order for Nevada to continue to be the leader in gaming regulation, it should evolve their regulations to allow mobile registration.” 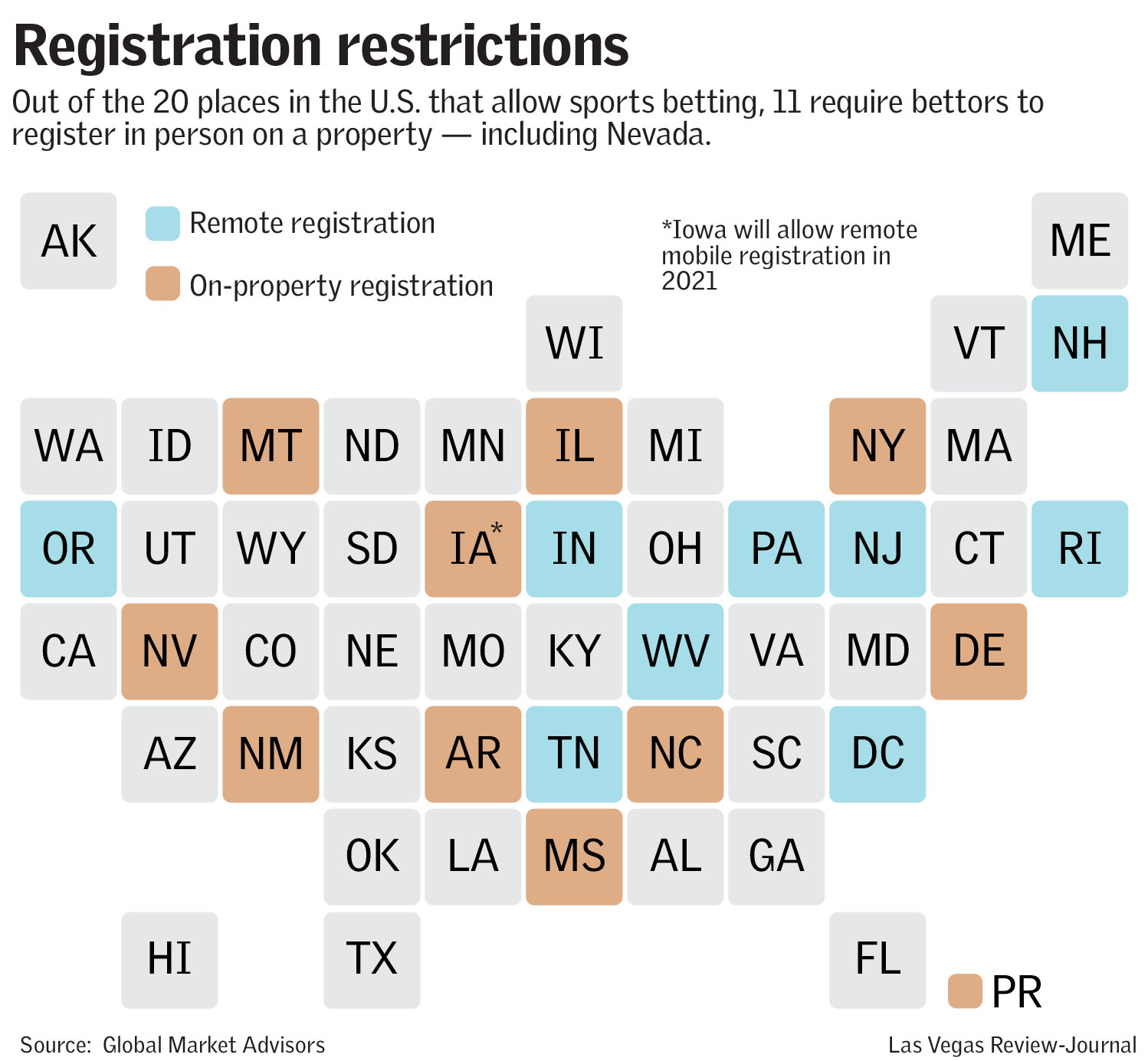 So far, nine out of the 20 U.S. places with legal sports betting allow remote registration, starting with New Jersey. It’s proven effective for the state: Roughly 80 percent of sports bets in New Jersey were placed online or via mobile earlier this year.

Grove believes Nevada’s sports betting industry faces a risk if it fails to keep up with other states’ regulations and innovations, especially as mobile sports betting continues to grow. He said about two-thirds of the state’s sports betting handle is placed using a mobile device today.

According to a March report from the American Gaming Association, 17 percent of people who have not placed sports bets of any kind in the past year expect to place a bet on sports using an online sportsbook in the next year.

“You’d like to be able to set up an account remotely,” said Chris Connelly, founder of Contrarian Investments, one of the first sports betting mutual funds in the U.S. Going to sportsbooks in person “is definitely a hassle.”

He said the line at sportsbooks can be overwhelming, especially during major sporting events like March Madness. One year, he waited in line 50 minutes during the basketball tournament and missed the opportunity to place a bet.

“It takes away from the experience,” Connelly said. “You’re going to miss out on a percentage of the population making bets because they don’t want to deal with the crowds.”

Frank Carulli said professional sports bettors like himself often have multiple mobile accounts: He has at least nine and is looking to open more in other states.

Registering for each one in-person can amount to a lot time in the car. Carulli said he doesn’t mind the drive, but he purposefully moved less than a mile from the Strip so he could be closer to the sportsbooks.

Remote registration “would be a big benefit,” he said. “Without a question, you’d get a lot more handle, and it would allow bettors in remote locations to open several accounts and shop for the best betting lines.”

Grove said signing up in-person isn’t much more difficult than signing up remotely, but because consumers might perceive it as a burden, some could be deterred from creating accounts.

According to a 2017 Eilers & Krejcik survey that included respondents from all 50 states, 71 percent would continue placing illegal bets online if they had to go to their local casino to place a bet legally.

Grove said that if people find betting easier within their own states, they will be less inclined to gamble in Las Vegas.

“Some people are an hour, two hours away from a casino in New Jersey,” Asher said. “The in-person sign-up requirement makes a lot of sense in Nevada. … In New Jersey, it’s just not practical.”

“The regulations here are conducive to sports wagering, as we’ve seen from the consistent growth of the business in spite of other states going live,” he said.

Sticking to the rules

Nevada gaming regulators looked into remote registration last year, but Sandra Morgan, chairwoman of the Nevada Gaming Control Board, said there have been no discussions on the topic since she took the role in January.

“I do think we have a great and stable statutory and regulatory scheme, but there’s always room for improvement, and to be able to modernize regulations that have been in place for a very long time is definitely going to be a focus of mine,” she said.

The main driver behind in-person account registration in Nevada is to keep people coming to the casinos, according to Tony Cabot, a UNLV professor and a former gaming attorney.

“They want the customer to come into the casino at least once to effectively verify their identification. A get-to-know your customer sort of thing,” he said. “The basic argument is, there are casinos everywhere. It’s not that big of a deal to go to a casino.”

But it’s also a form of protection for large sportsbooks, according to Robert Walker, director of sportsbook operators for Las Vegas-based USBookmaking.

“If you have a ton of sportsbooks, you want to make your players to come in,” he said. “If you manage a sportsbook in Sparks, Nevada, then it’s very difficult to get people to come in to that venue.”

Morgan pointed out that even with looser registration regulations in other states, Nevada’s sports betting market is continuing to grow. Nevada saw $301 million in sports betting revenue in 2018 compared with $248.8 million in 2017.

Even then, its impact on the overall gaming industry is relatively small. In the 2019 fiscal year, sports betting revenue accounted for 2.7 percent of Clark County’s total gaming win.

While the future of Nevada’s reputation in sports betting is unknown, Grove said that the overturning of PASPA could prove to be a positive for Nevada, even if bettors are in favor of remote registration.

“The idea is the more mainstream the activity becomes, the more opportunity for greater segments to say, I tried this at home, I want to go where it happens for real, the Mecca of gambling. That remains Las Vegas,” Grove said.