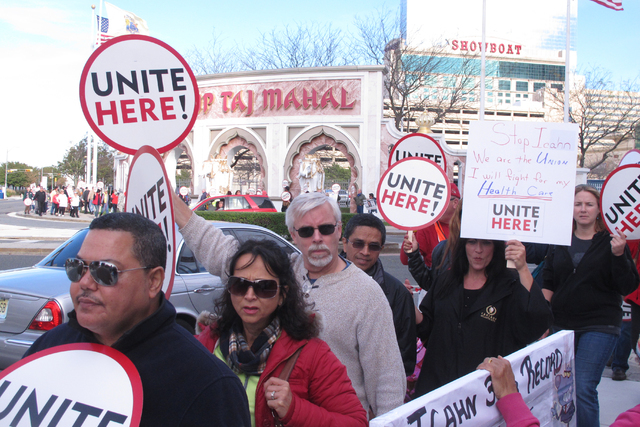 ATLANTIC CITY — Most unionized workers at Atlantic City’s Trump Taj Mahal casino are either doing without health insurance altogether, or relying on taxpayer-subsidized care, a new survey shows less than a week after the U.S. Supreme Court let stand the termination of health care benefits by a lower court.

A survey released Monday by Local 54 of the Unite-HERE union finds 33 percent of Taj Mahal casino workers have no health coverage, while another 50 percent rely on coverage under the Affordable Care Act, Medicare or Medicaid.

The U.S. Supreme Court recently declined to hear a union challenge to the termination of health insurance and pension benefits for Taj workers that were eliminated by a bankruptcy court judge.

“I feel like I’m working just to pay for health insurance,” said Mayra Gonzalez, a food preparation employee who has worked at the Taj Mahal since the day it opened in 1990. She and her husband are diabetic, and the cost of medicine, supplies, insurance payments and co-pays leave little for other expenses.

“It’s really hard to pay the bills,” she said. “I work really hard, and these things used to be covered. We’ve had to make sacrifices. Vacations? Forget it.”

Gonzalez pays $241 a month for health insurance with a $3,000 annual deductible. When she was covered through her job, there were no employee premium payments required, and an annual deductible of $400.

Donald Trump, the presumptive Republican presidential nominee, cut ties with the company before the benefits were eliminated.

The former Trump Entertainment Resorts filed for bankruptcy in 2014 and asked the judge to let it cancel expensive parts of the union contract, including health insurance and pension benefits. The judge agreed, and the union appealed the decision all the way to the U.S. Supreme Court, which refused to hear the case on May 31.

The results of the survey of just under 500 unionized Taj Mahal workers are somewhat better than those taken a year earlier. In the 2015 survey, the union found 44 percent had no health insurance, and 23 percent relied on government subsidies to purchase it.

The union did not have similar data for its workers nationwide.

The company gave workers a stipend to help purchase coverage, but many workers say it does not come close to the cost of insurance on the private or government-run markets.

Icahn, who also owns Atlantic City’s Tropicana casino, has repeatedly accused the union of running its health plan as a profit-making enterprise for the union itself, and said his company would not pay the fixed health care costs demanded by the union.

The union says it is unfair for the company to push the burden of insuring Taj Mahal workers onto U.S. taxpayers.