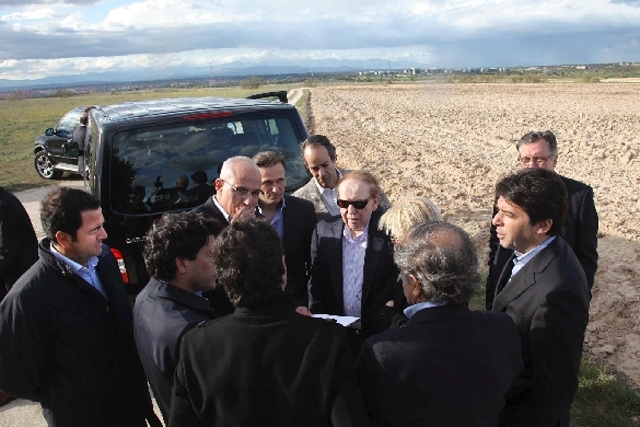 Las Vegas Sands Corp. chairman Sheldon Adelson, center with sunglasses, and Madrid officials are seen at a site on the outskirts of Madrid where EuroVegas is planned. But a new report suggests Sands could delay development of the planned $22 billion resort complex in Spain unless the government lifts a ban on smoking inside casinos.

Las Vegas Sands Corp. could delay development of a planned $22 billion resort complex in Spain unless the government lifts a ban on smoking inside casinos, a wire service reported.

However, in a statement to Spanish media last week, the company said reports that the proposed development was not progressing were “inaccurate.”

The company said the matter involved “complex issues.” Las Vegas Sands has been developing the project for more than a year.

“The company remains interested in building integrated resorts in Spain and is grateful and supportive of government’s continued work to resolve complex issues tied to enabling such large and complex projects in the Region of Madrid,” Las Vegas Sands said in a statement.

EuroVegas is expected to include 12 hotels and six casinos. Last fall, Madrid was chosen as the location over Barcelona, Spain.

According to media reports, Madrid has agreed to other requests made by Adelson and Las Vegas Sands, including amendments to labor laws, tax breaks and allowing parents to take children onto casino floors.

Las Vegas Sands officials have said the company would provide 25 percent to 35 percent of equity needed to build the development. Estimates have said EuroVegas could be completed around 2025 and could create more than 200,000 jobs.