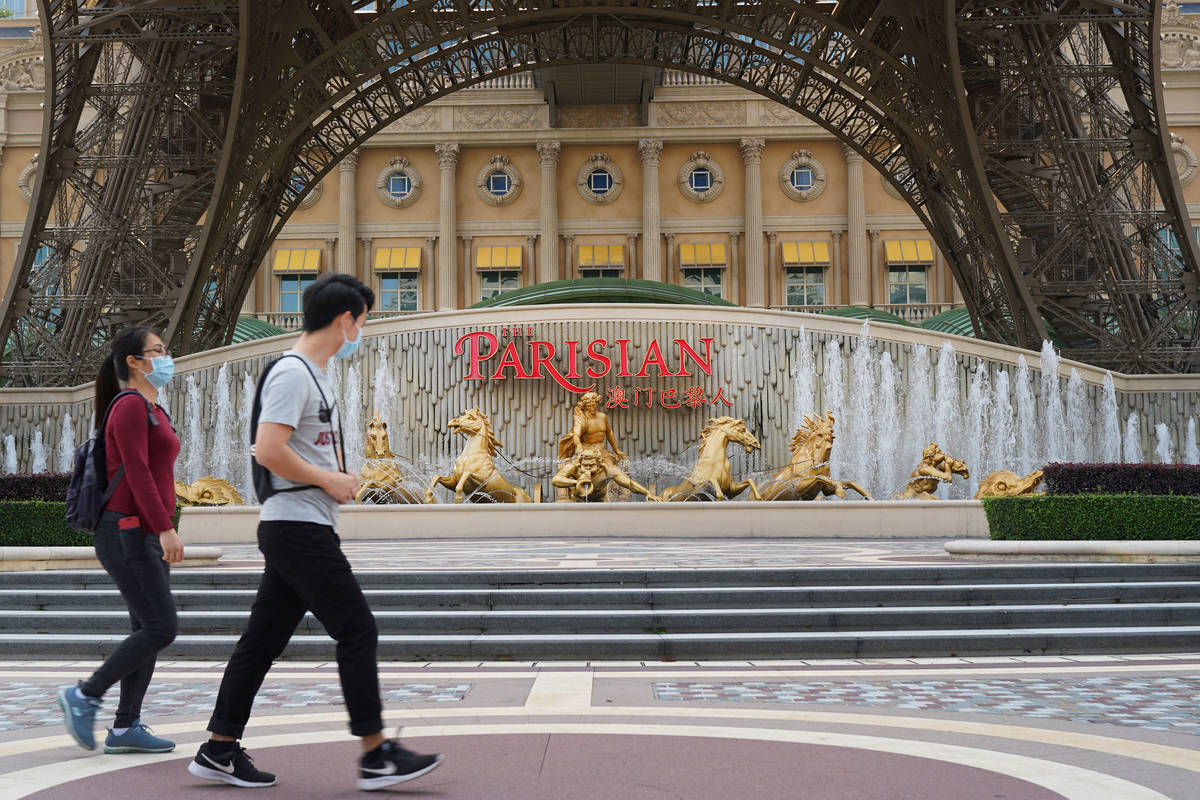 People walk past a replica Eiffel Tower outside the Parisian Macao on April 10, 2020. (Inside Asian Gaming)

When Las Vegas Sands Corp. announced last month that it was selling its Las Vegas assets to affiliates of Apollo Global Management Inc. and Vici Properties Inc. for $6.25 billion, analysts said the move marked a corporate decision to focus on investing in foreign opportunities.

And that’s what the company’s Wednesday earnings call sounded like, focusing on the company’s market-leading operations in Macao and Singapore with a few remarks about Las Vegas.

“We remain confident in the eventual recovery in travel and tourism spending across our markets,” Sands Chairman and CEO Rob Goldstein said. “Demand for our offerings from our customers who have been able to visit remains robust, but pandemic-related travel restrictions, particularly in Macao and Singapore, continue to limit visitation and hinder our current financial performance.”

Goldstein said the company “is fortunate that our financial strength supports our investment and capital expenditure programs in both Macao and Singapore, as well as our pursuit of growth opportunities in new markets.”

Where those “new markets” will be have been the subject of analyst speculation.

During Wednesday’s conference call with investors, company executives discussed further investment in Macao and Singapore and the company is evaluating a return to producing dividends to shareholders.

The company has acknowledged investing millions of dollars in advertising and lobbyists to bring gaming to the state of Texas and that there are further domestic opportunities in New York and Chicago. The company gave no updates on its strategy for those markets Wednesday.

The financial position, results of operations and cash flows of the Las Vegas operating properties — The Venetian, Palazzo and Sands Expo and Convention Center — have been presented by the company as a discontinued operation held for sale.

The deal with Apollo and Vici, subject to customary closing conditions, including regulatory approvals, is expected to be completed in the fourth quarter.

Revenue was down 15.6 percent from a year ago, the quarter in which the gaming industry got its first bitter taste of what the COVID-19 pandemic was going to do to each company’s financial picture.

Casinos in Macao were closed for 15 days in the first quarter of 2020 and Nevada properties endured 14 days of what eventually would be 78 days of shut-downs during the quarter.

While the Macao and Singapore numbers slumped during the quarter, executives said they were optimistic that a slight uptick in visitation they began observing in Macao in March would pick up steam as more people began traveling across southern China.

“In March, we started to experience a pretty meaningful rebound in visitations vs. January and February and as you’ve seen … that has continued with similar momentum in April with visitations reaching post-pandemic highs in the middle of April,” Chum said.

“Management pointed out that … April to date has shown further month-over-month acceleration, and hinting that May, with the Golden Week holiday, should show further acceleration,” Greff said in a report to investors. “However, we couldn’t help but note a more somber tone on the rate of recovery in both Macao and Singapore, given limited visibility on travel restrictions lifting or easing.”

Greff noted limited commentary on mergers and acquisitions and that “we think any potential (and partial) deployment of Las Vegas asset sales net proceeds into some dividend resumption is likely a next-year event, rather than later this year.”

He also noted there was no update on Macao’s license renewals nor the process or timeline it may take, and the only thought on Macao moving to digital currency is that Sands believes it should not be a concern, but rather a potential source for additional player liquidity.

Gross gaming revenue in Macao has shown improvement from over a year ago as well.