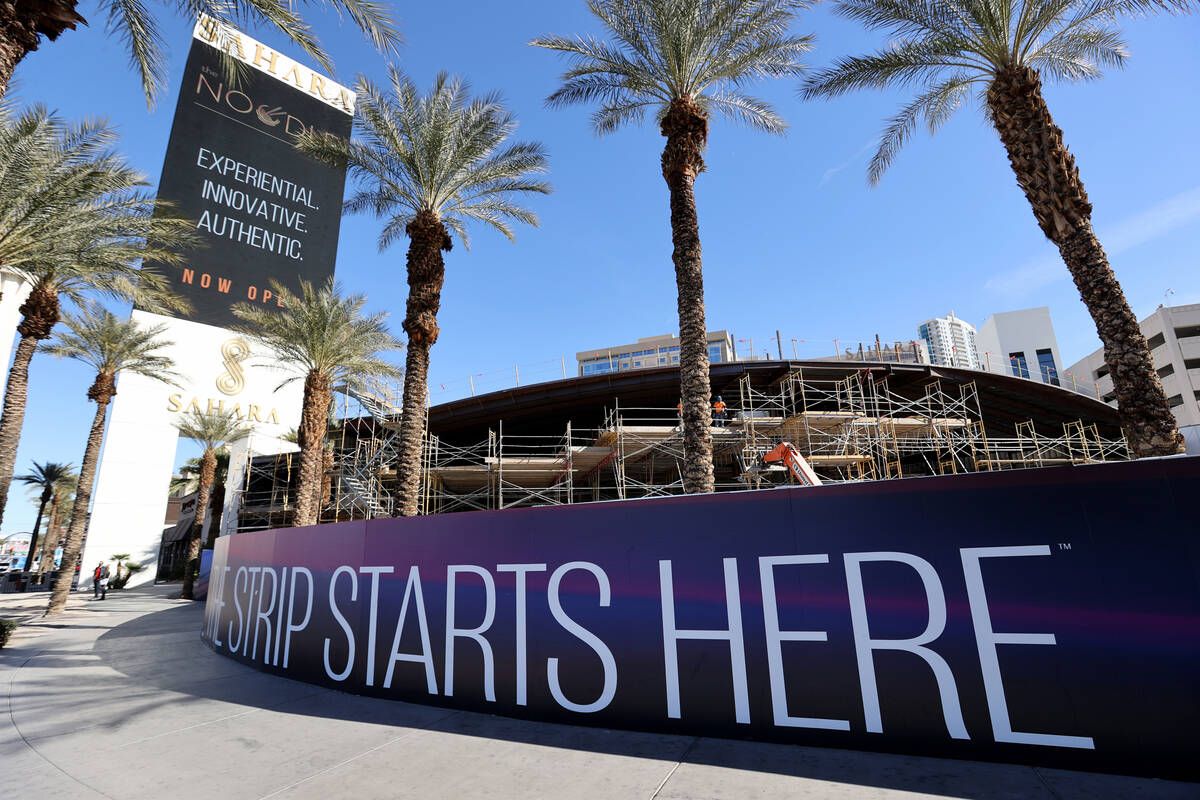 Construction continues at the porte-cochere at Sahara Las Vegas Friday, Jan. 28, 2022. Recent renovations at the resort casino are part of a larger revitalization of the north Strip. (K.M. Cannon/Las Vegas Review-Journal) @KMCannonPhoto 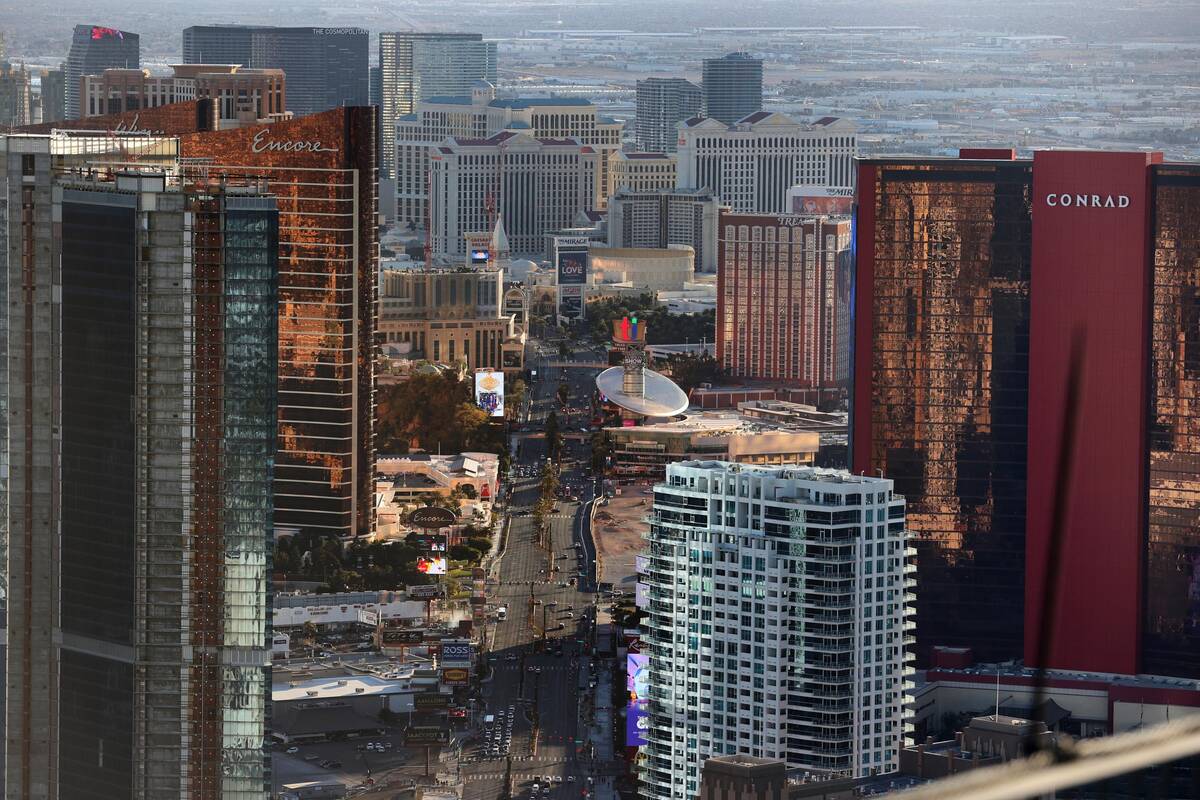 The North Strip in Las Vegas as seen from The Strat Skypod Wednesday, Feb. 2, 2022. New and resumed building and property renovations are part of the revitalization of the north Strip. (K.M. Cannon/Las Vegas Review-Journal) @KMCannonPhoto 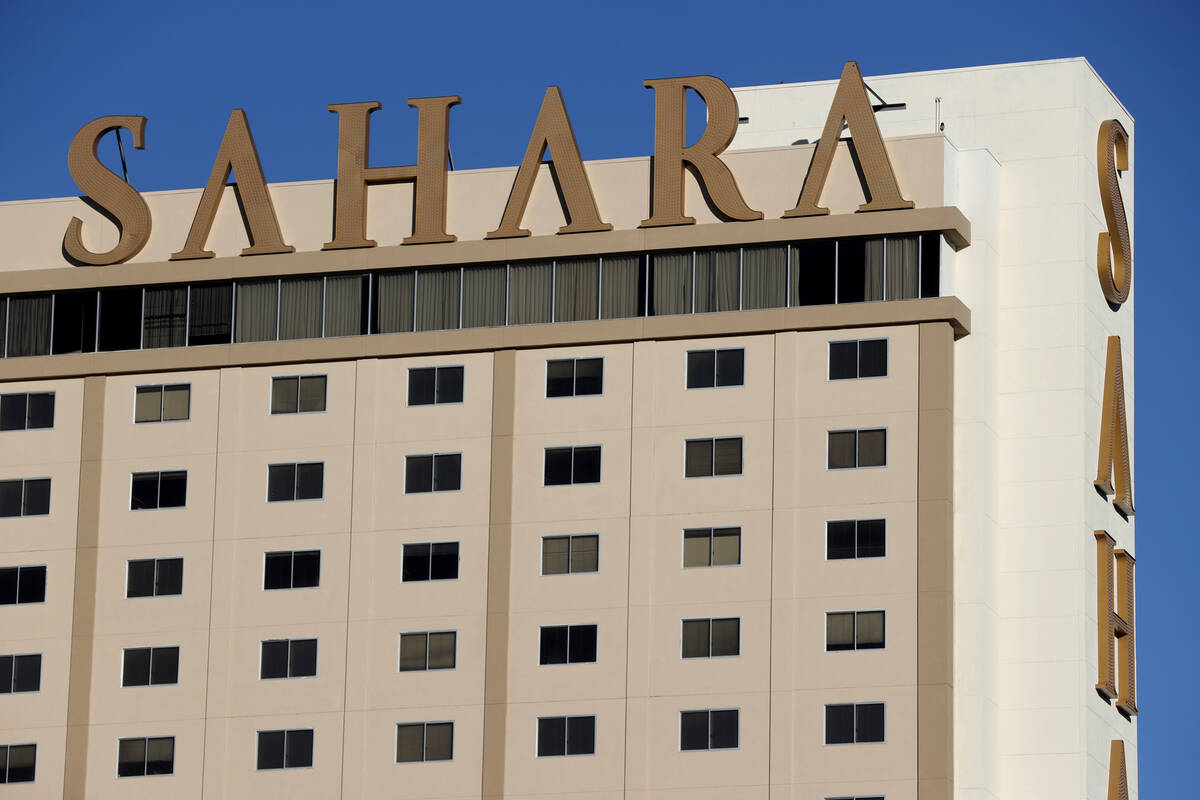 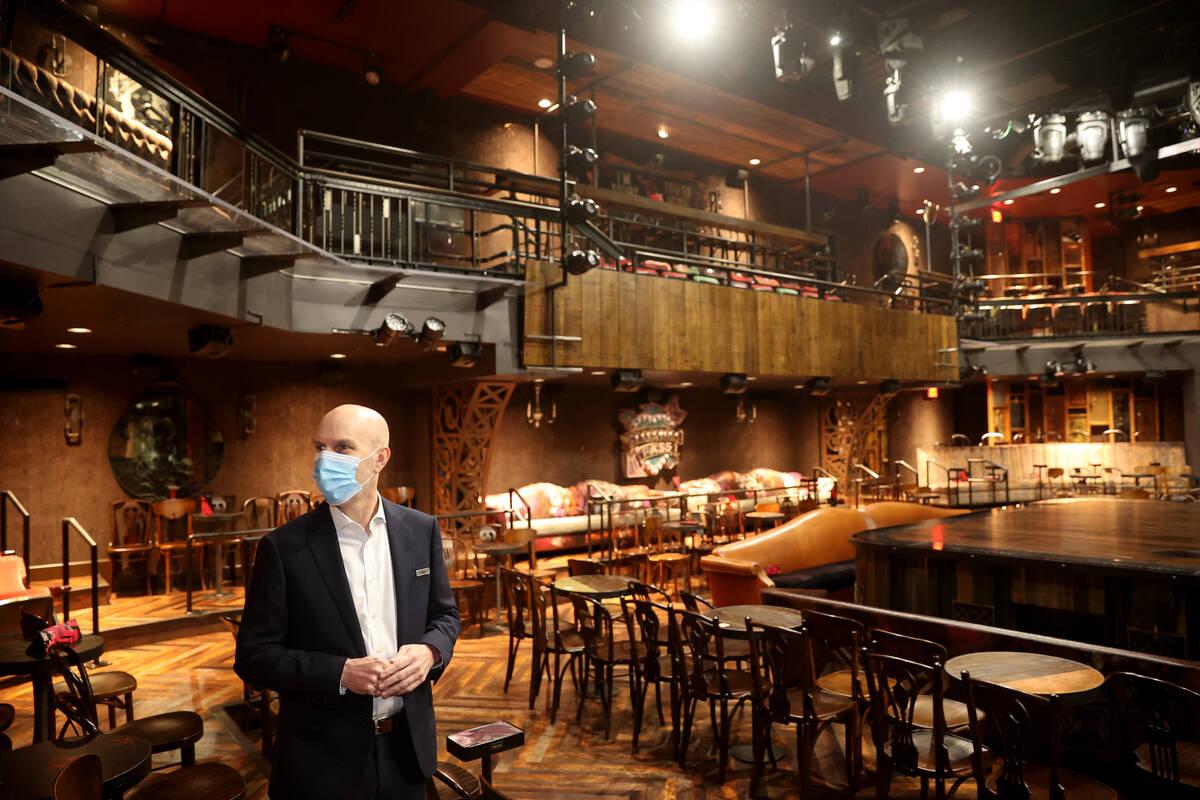 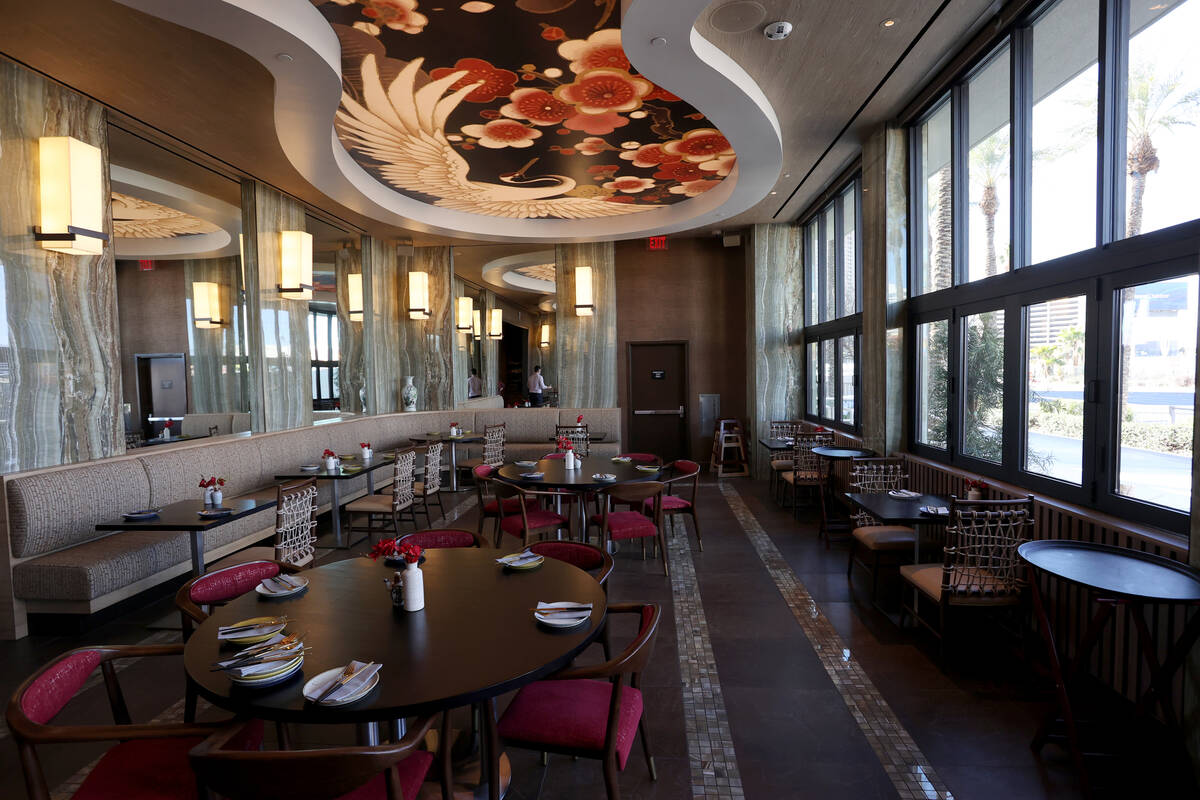 The Noodle Den at the Sahara Las Vegas Friday, Jan. 28, 2022. The new Strip-front eatery by chef Guoming “Sam” Xin is part of a new restaurant row at the property. Recent renovations at the resort casino are part of a larger revitalization of the north Strip. (K.M. Cannon/Las Vegas Review-Journal) @KMCannonPhoto 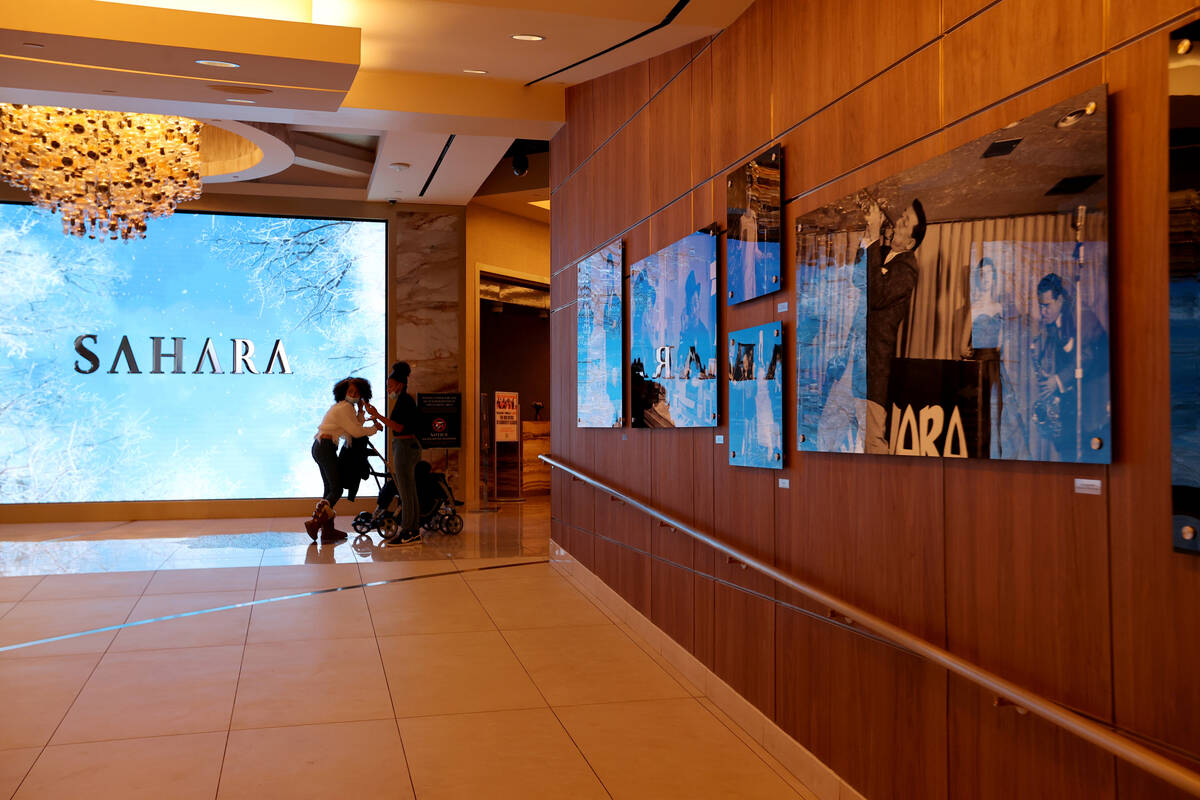 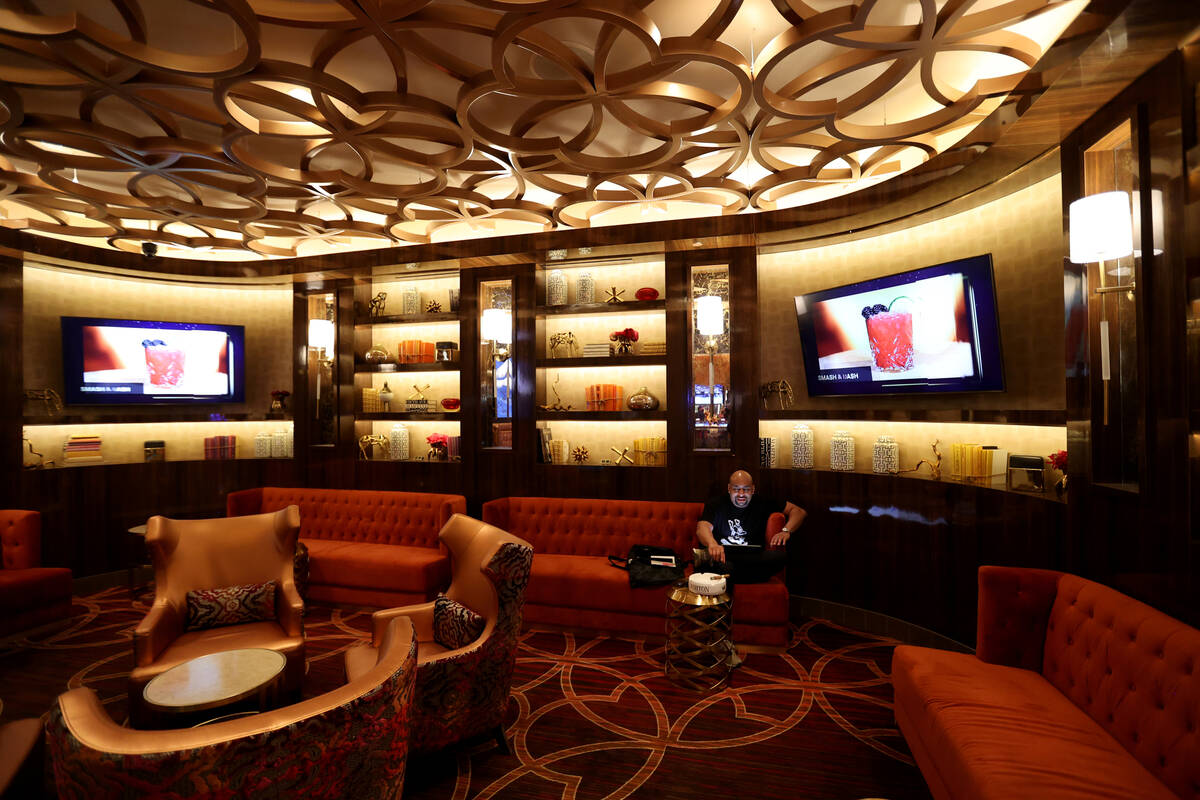 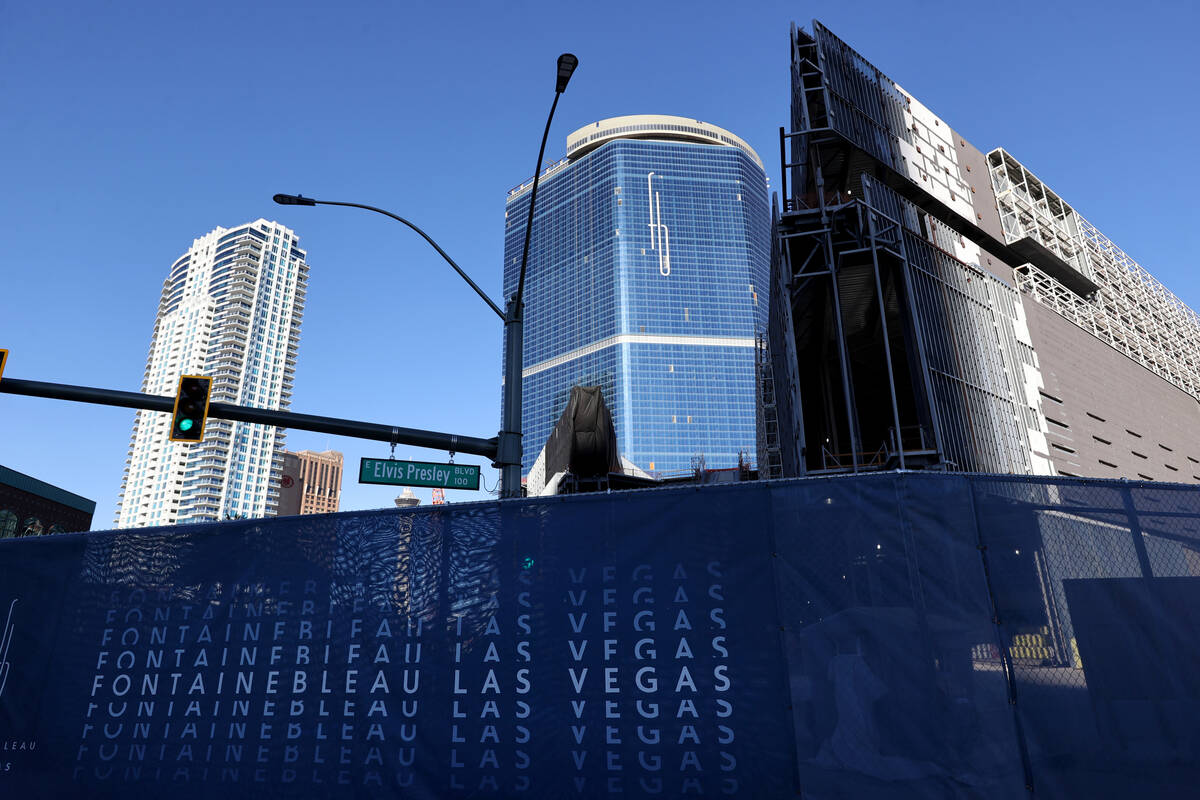 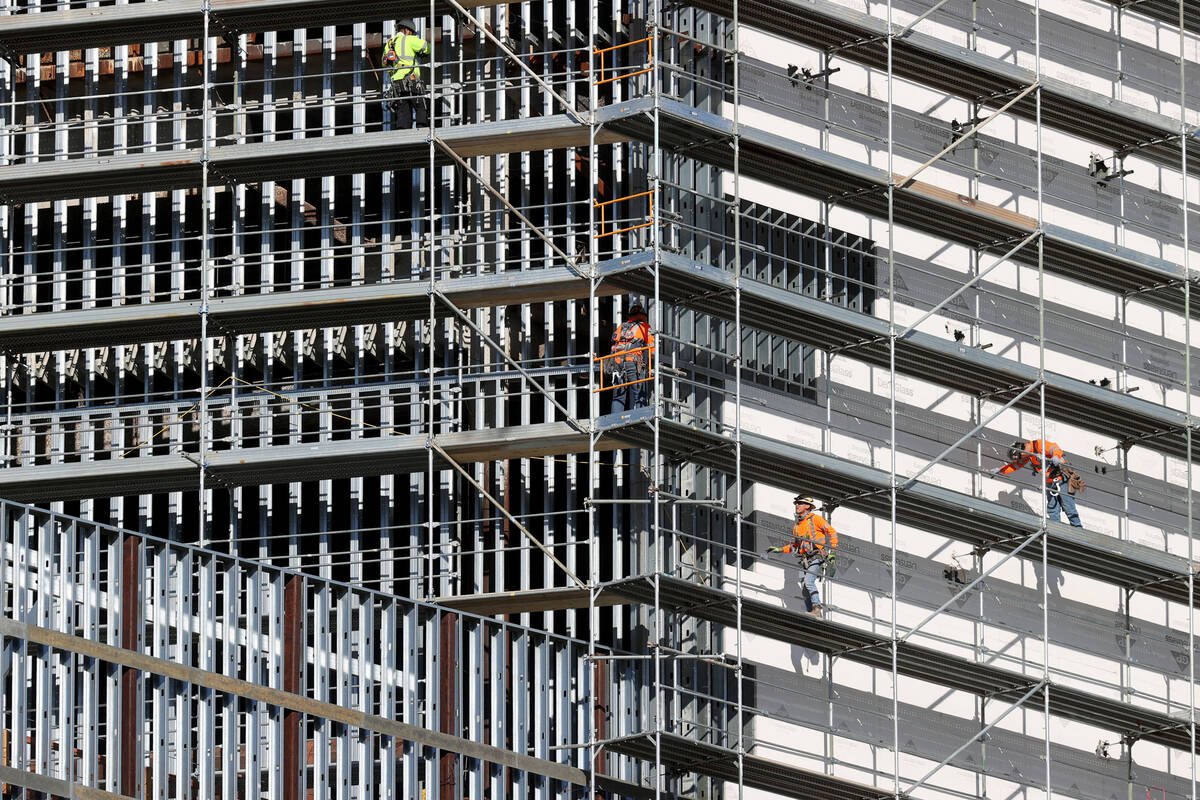 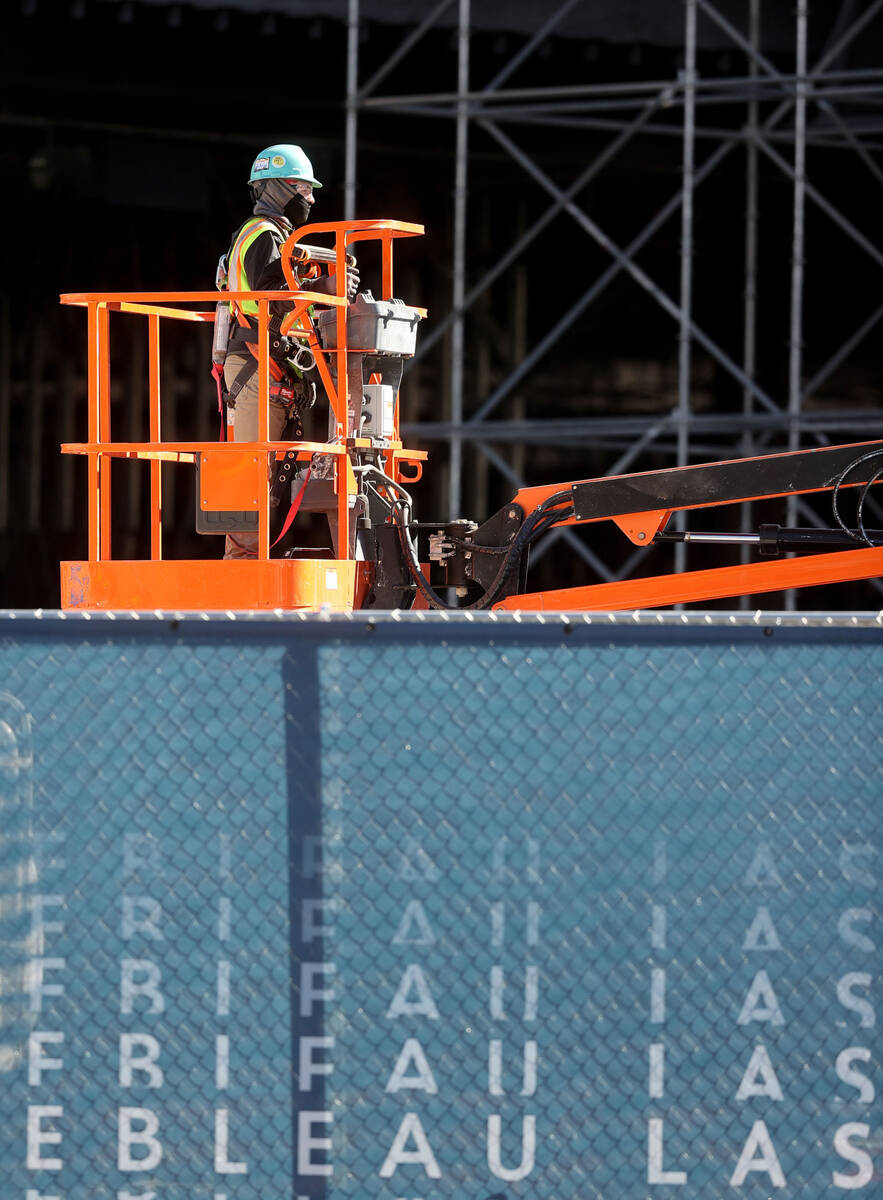 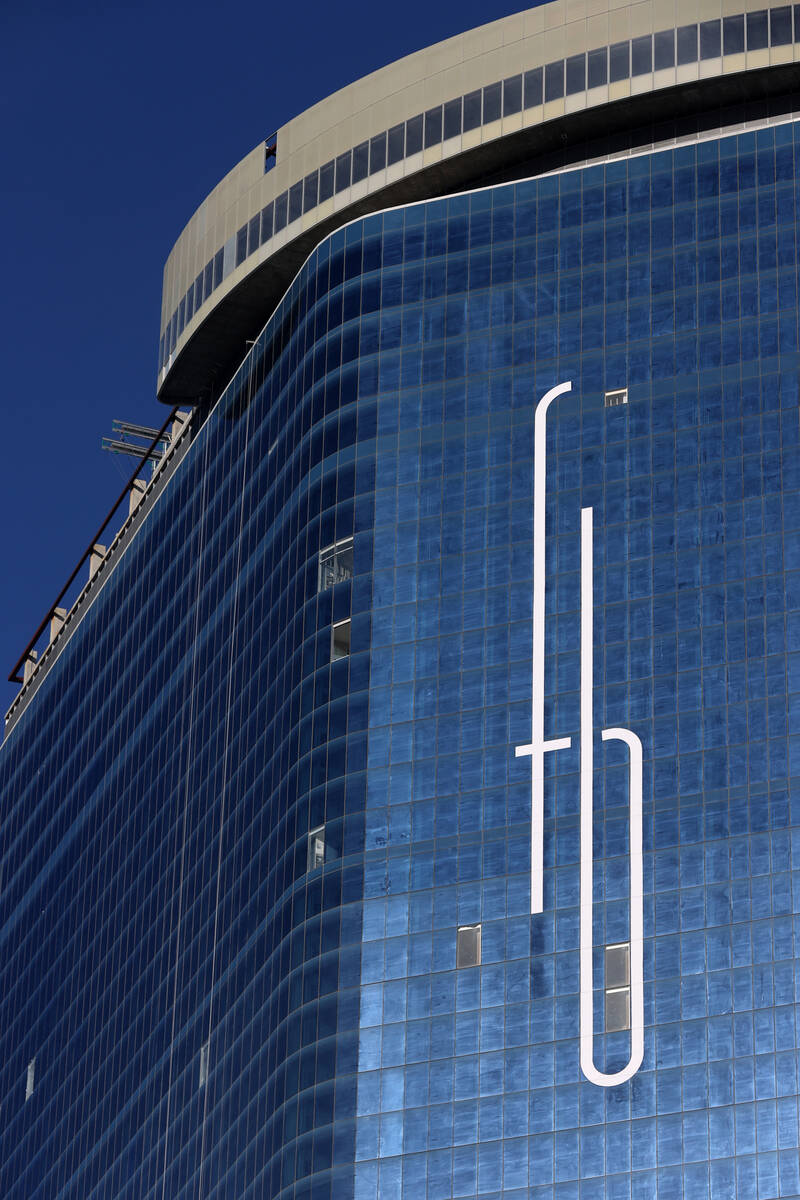 Some 15 years ago, a big crop of developers had big plans for the north edge of the Strip.

Now, after years of seeing big plans come and go, that end of Las Vegas’ famed casino corridor is seeing its most momentum in years — and local observers say the area’s long-hoped-for turnaround could finally materialize.

The $4.3 billion Resorts World Las Vegas opened its doors in June, marking the Strip’s first newly built resort in more than a decade. Fontainebleau Las Vegas, which got started during the mid-2000s bubble but has yet to open, was reacquired by its original developer a year ago, is under construction again and is set to debut by the end of 2023. And the Las Vegas Convention Center’s $1 billion, 1.4 million-square-foot West Hall expansion opened in June.

“I think the pendulum might be starting to shift with the critical mass of projects completed or underway,” UNLV gaming historian David Schwartz said.

There’s more beyond ground-up construction, too. Sahara Las Vegas is in the middle of a $150 million renovation that includes remodeling its 1,100 rooms, a redone pool and new restaurants, and The Strat completed its own $110 million remodel to upgrade its rooms, casino and restaurant offerings in 2020.

Circus Circus, which Treasure Island owner Phil Ruffin purchased in 2019, recently expanded its Midway arcade and carnival game area, updated its casino floor with more modern slot cabinets and electronic table games, added a new ride at Adventuredome and is continuing with the $9 million renovation of its food court.

“There’s a lot going on down here,” Resorts World Las Vegas President and CEO Scott Sibella said. “In five years, I think this will be the hot side of the Strip and the heart of Las Vegas.”

One of the starkest differences between the north Strip and other sections of the resort corridor is foot traffic, as other spots have more resorts, more attractions and more people walking around.

But the current growth along the north Strip will put the newly expanded Convention Center within walking distance of thousands of new hotel rooms, a feature that meeting planners love.

“They want the convenience of being comfortably walkable,” said Steve Hill, president and CEO of the Las Vegas Convention and Visitors Authority.

Asked why the north Strip has long had less foot traffic than other parts of Las Vegas Boulevard, developer Lorenzo Doumani noted: “There’s nowhere to walk to.”

But he, too, believes the Convention Center’s expansion will have a “tremendous” impact on the area once the meetings industry has fully recovered from the pandemic.

Doumani plans to build an $850 million nongaming hotel, Majestic Las Vegas, across from the new West Hall. His project plans include around three dozen corporate suites, with sales prices starting at $10 million.

But with Resorts World up and running, the Fontainebleau once again under construction, and the Convention Center having expanded, things have shifted.

The north Strip is seeing a lot of momentum but carries a spotty track record of real estate development. Perhaps no project better symbolizes its roller-coaster ride than the towering Fontainebleau.

Florida developer Jeffrey Soffer and former Las Vegas casino executive Glenn Schaeffer broke ground on the hotel-casino project in 2007. But after the economy crashed, the unfinished Fontainebleau went bankrupt in 2009.

Billionaire Carl Icahn acquired the 60-plus-story tower in 2010 for around $150 million and, after leaving it largely untouched, sold it in 2017 for $600 million to developer Steve Witkoff and partners.

Witkoff set out to open the Drew Las Vegas, as he called the project. But he suspended construction in March 2020 as Las Vegas rapidly shut down over fears of the coronavirus outbreak.

In a full-circle moment, Soffer teamed with Kansas conglomerate Koch Industries to reacquire the project in February 2021. Construction has resumed, and Fontainebleau Las Vegas is scheduled to open in late 2023.

“We think having a neighbor of that scale on our side of the street on this end is going to be great for both of us,” said Paul Hobson, president of Sahara Las Vegas.

Gaming and hospitality consultant Josh Swissman has more confidence than ever that the Fontainebleau will be completed as planned.

“Fontainebleau has gone through a number of different iterations, none of them successful, but I feel there’s more momentum there now than there has been in a long time,” he said. “I think pretty highly of the leadership there. They may actually get it over the finish line … but we’ve heard that before.”

Swissman said the Great Recession was the original death blow for the Fontainebleau, but “barring anything bizarre like that happening again, it feels like the right time and there’s good momentum there.”

Israeli investors bought the New Frontier in 2007 for more than $1.2 billion and imploded it with plans to develop a luxury resort. But the economy tanked, and the project was never built.

Australian billionaire James Packer acquired the site through foreclosure in 2014 and set out to build the 1,100-room Alon Las Vegas. But Packer reportedly had trouble raising project funds, and his company Crown Resorts bailed on the development and put the land up for sale.

Wynn Resorts announced in December 2017 that it was acquiring the site and some adjacent property — about 38 acres total — for $336 million. Founder Steve Wynn told analysts in January 2018 that he wanted to move quickly on a project there.

Days later, The Wall Street Journal reported that Wynn had a decadeslong pattern of sexual misconduct.

Wynn, who called the allegations “preposterous,” soon resigned as chairman and CEO of his company, citing “an avalanche of negative publicity.”

Brian Gullbrants, president of Wynn Las Vegas, said the company isn’t quite ready to disclose what it has in mind for the land on Las Vegas Boulevard.

“We certainly have thoughts and plans,” Gullbrants said, “but nothing we can share at this time.”

Other sites along the north Strip have their own up-and-down history.

Former UNLV and NBA player Jackie Robinson unveiled plans to build an arena and a luxury hotel on the former Wet ’n’ Wild water park site in 2013. Crews started excavating the site in March 2017, and Clark County commissioners approved an expansion of the project’s plans that year.

Today, the project site remains little more than a giant hole in the ground with no visible signs of construction activity.

John Delibos, director of community affairs and government relations for Robinson’s project, said the venture is “moving forward” and in the “final stages” of procuring its financing.

Robinson wasn’t the first person to draw up big plans for the site, or even the first to pitch an arena there.

Texas developer Chris Milam reached a deal in 2006 to buy the 27-acre spread for $450 million and filed plans for a 142-story casino resort. The project went nowhere.

Milam then filed plans in 2010 for a 20,000-seat arena at the same property. The $750 million project would “light this area on fire” with economic activity, he said at the time.

That, too, wasn’t built.

Analysts lauded the move, believing the north Strip was poised to see Las Vegas’ next major wave of hotel-casino development.

But MGM never built a big project there.

Alan Feldman, a former MGM executive and current distinguished fellow at UNLV’s International Gaming Institute, recalled the “economy was raging” before the crash, and MGM was “feeling a lot of wind beneath our wings” with its multibillion-dollar CityCenter project on the Strip.

“So the whole notion of another mixed-use development seemed not just real, but like it had very powerful energy,” he said.

Diana Bennett, CEO of casino operator Paragon Gaming, said that whenever people had project plans along the north Strip, Las Vegas was hit with “one kind of unforeseen disaster after the other,” including the Great Recession and the pandemic.

But she figures the Fontainebleau will “make a huge difference” and pointed to other development opportunities in the area.

“I think if the north Strip has ever had a chance, this should be it,” she said.

‘So much has actually happened’

Today, the pipeline of projects in the north Strip area seems to keep growing again.

Resorts World still has two more phases of construction it plans to finish, with the goal of getting to 8,000 to 10,000 rooms, building an arena and adding more convention space, according to Sibella.

Golden Entertainment, owner of The Strat, announced plans this past fall for a $70 million, four-story golf entertainment complex, saying the project is scheduled for completion by the end of 2023.

Resorts World already has contracted with Boring for its own tunnel linking the resort to the Convention Center. Wynn Resorts also is close to working with Boring to design its own tunnel to connect the facility with Encore Las Vegas.

Boring has its own plans for a citywide loop system that by the mid-2020s would bring people from south Strip properties, Reid International Airport and downtown Las Vegas to the Convention Center and the north Strip.

Moreover, the Las Vegas Convention and Visitors Authority board of directors voted in October to sell 10 acres of the former Riviera’s footprint for $120 million to Chilean developer Claudio Fischer, who hasn’t spoken publicly about his plans for the site.

“It’s in a very different place,” Feldman, the former MGM executive, said of the north Strip. “So much has actually happened there now.”