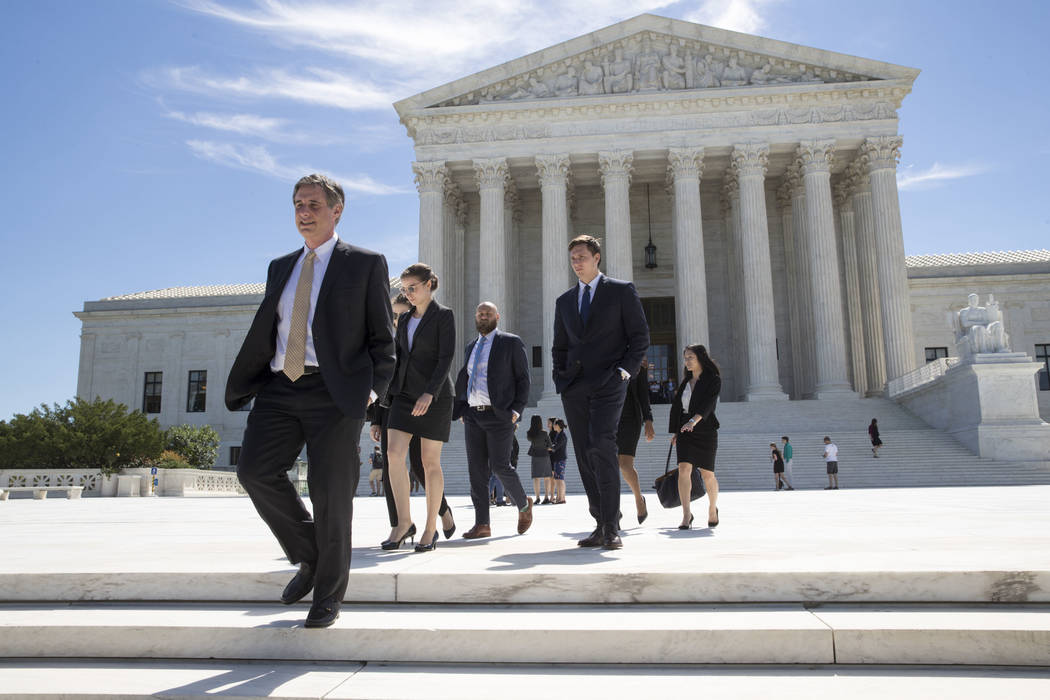 The U.S. Supreme Court surprised legal experts and the gaming industry on Tuesday, agreeing to review a lower-court ruling that blocks New Jersey from allowing sports wagering at its casinos and racetracks.

Justices next fall will likely take up the 3rd U.S. Circuit Court of Appeals ruling that struck down a New Jersey law the court says violates the federal Professional and Amateur Sports Protection Act of 1992 (PASPA) forbidding state-authorized sports gambling.

The high-court ruling could lead to other states approving their own legislation to approve sports betting.

The Washington-based American Gaming Association, whose membership includes most of Las Vegas’ major casino companies, applauded the court’s decision and said the review would likely speed up efforts to repeal PASPA.

‘Nail in the coffin’

“Today’s decision, despite the eventual outcome in the court, is another nail in the coffin of the failed federal prohibition of sports betting,” said Geoff Freeman, president and CEO of the association.

“PASPA is doing nothing to stop millions of Americans from wagering on sports,” Freeman said in a conference call with reporters Tuesday. “Instead, it has created an unregulated $150 billion illegal market that offers no oversight by law enforcement, no accountability to regulators, no protection for consumers and no concern about the integrity of games.”

By comparison, Nevada posted a record sports-betting handle of $4.5 billion in 2016.

Freeman said the court’s review of the New Jersey case, which could take months to complete once it starts, would enable lawmakers and policymakers to become educated about illegal sports wagering.

“This will increase the likelihood that Washington has to take look at this law,” Freeman said. “Whether the court rules it unconstitutional or not, Congress can no longer ignore the failings of this law over the past 25 years.”

Earlier this month, the association formed the Sports Betting Coalition, an organization of attorneys general and police, policymakers and other advocates for the repeal of PASPA. The coalition’s mission is to educate lawmakers about illegal sports betting and advocate for a national policy that would enable states to choose whether they want to opt in. Seven states already have legislation ready if PASPA is repealed.

No credible supporters of PASPA have stepped up to challenge the association’s stance.

Las Vegas gaming officials generally support nationwide sports betting, believing that gamblers would still come to big events like the Super Bowl and the NCAA March Madness basketball tournament. They also point out that Las Vegas-based companies would have strong brand recognition and could set up sports books in other states.

Federal lawmakers have been slow to act on sports gambling legislation, viewing it as a low priority. But the association has made it a legislative priority and vows to lobby for hearings this year.

Las Vegas gaming attorneys Greg Giordano and Dennis Gutwald of the Gaming and Administrative Law Group of McDonald Carano, said they were surprised that the court agreed to hear the case.

“The only downside I see is that they could uphold the lower court’s opinion,” Giordano said. “And, frankly, that’s the status quo, which is where we stand right now. All I see is upside on this.”

Gutwald said he thinks the court may have taken the case because it’s a states’ rights issue.

“We have a court that’s slightly more disposed to states’ rights than in the past,” he said. “The question is whether New Jersey has the right to do what they’re doing, as a state’s right, to take the position they’ve taken, not withstanding PASPA.”

But Giordano has another theory.

“Maybe some of these justices are sports fans,” he said. “They read the papers, they know what’s going on with these sports leagues. Maybe that’s why they took the case.”