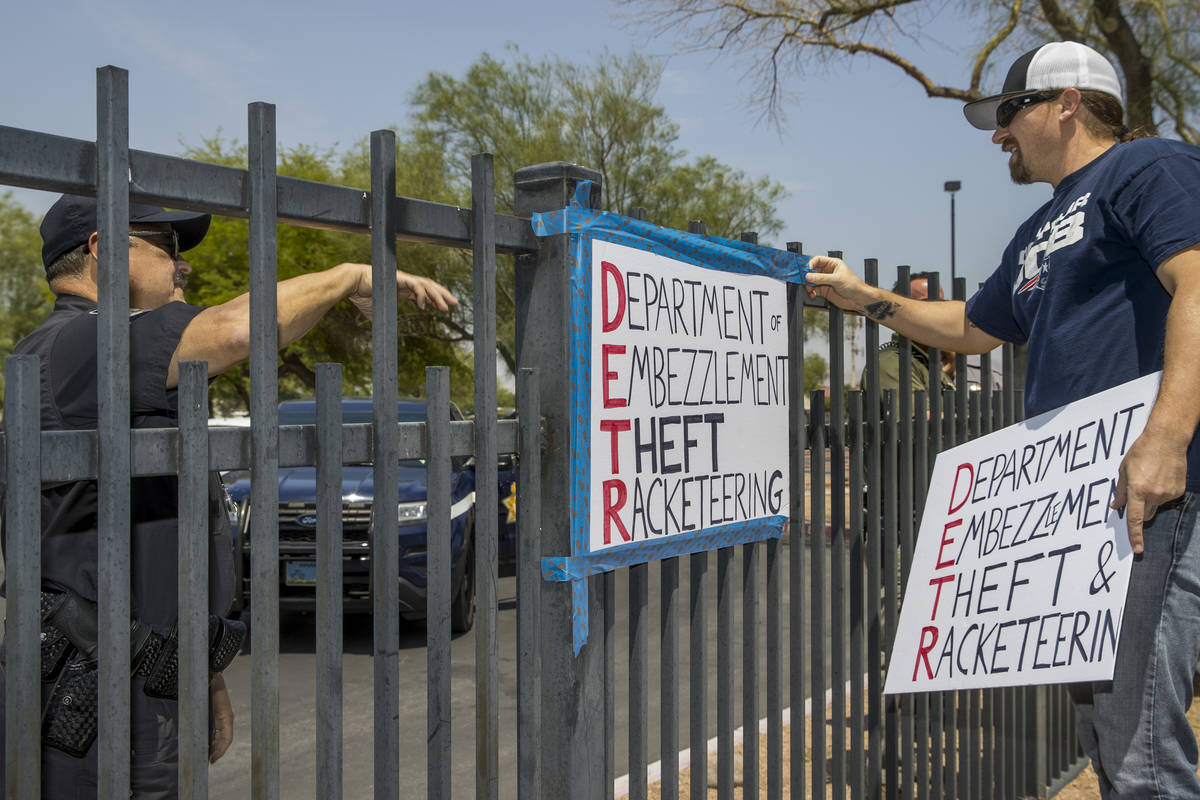 A security guard instructs Jon Berry, right, to take down a sign he attached to a fence in front of the Grant Sawyer State Office Building as gig workers protest the Nevada unemployment office on Friday, June 12, 2020 in Las Vegas. (L.E. Baskow/Las Vegas Review-Journal) @Left_Eye_Images

The number of Nevada gig workers filing for first-time unemployment spiked last week, up more than 360 percent than the previous week.

The Nevada Department of Employment, Training, and Rehabilitation said Thursday that it saw 57,783 initial claims for its Pandemic Unemployment Assistance – an increase of 45,246 initial claims, or 360.9 percent – from last week’s total of 12,537 claims.

DETR said the spike is “questionable” and that will track this latest data to “identify any potential trend.”

Meanwhile, continued claims for PUA totaled 89,253 last week, a decline of 867 claims, from the week prior.

DETR officials have previously said the agency is battling an influx of bogus unemployment applications, contributing to payment delays.

For many jobless Nevadans, delays in payments have upended daily life.

Shari Turrell, 44, applied for unemployment in June and said she’s been given the runaround for many months, estimating that she’s spent 400 hours on the phone.

Since July, Turrell’s been homeless and lives in her car.

Turrell sent her daughter to live with her son, who is in culinary school and can provide a roof over his sister’s head, in Washington State.

“There’s no worst moments in your life than having to admit that you failed as a parent,” she said. “I’ve been hoping for months that things would get better and that I could get work and she’d be able to go back to her high school that she loved so much.”

Despite receiving the cell phone number of DETR’s acting director, Turrell said the agency couldn’t budge on moving her claims along. On Thursday, she was driving to Washington State to see her family and to attend a job interview.

“I finally become so broken and bruised and emotionally destroyed by my home state,” she said. “If I get this job, I will never step foot in that state (Nevada) again.”

Turrell said she warns Nevadans filing for PUA benefits for the first time to “brace yourself.”

“I send my heart and my prayers with them because if they have to go through a fraction of what my family’s been through, brace yourself,” she said. “You will feel very alone. You will be very scared and be very stressed. Keeping fighting and hang on. Keep trying to get work, even if you’ve got to go out of state.”