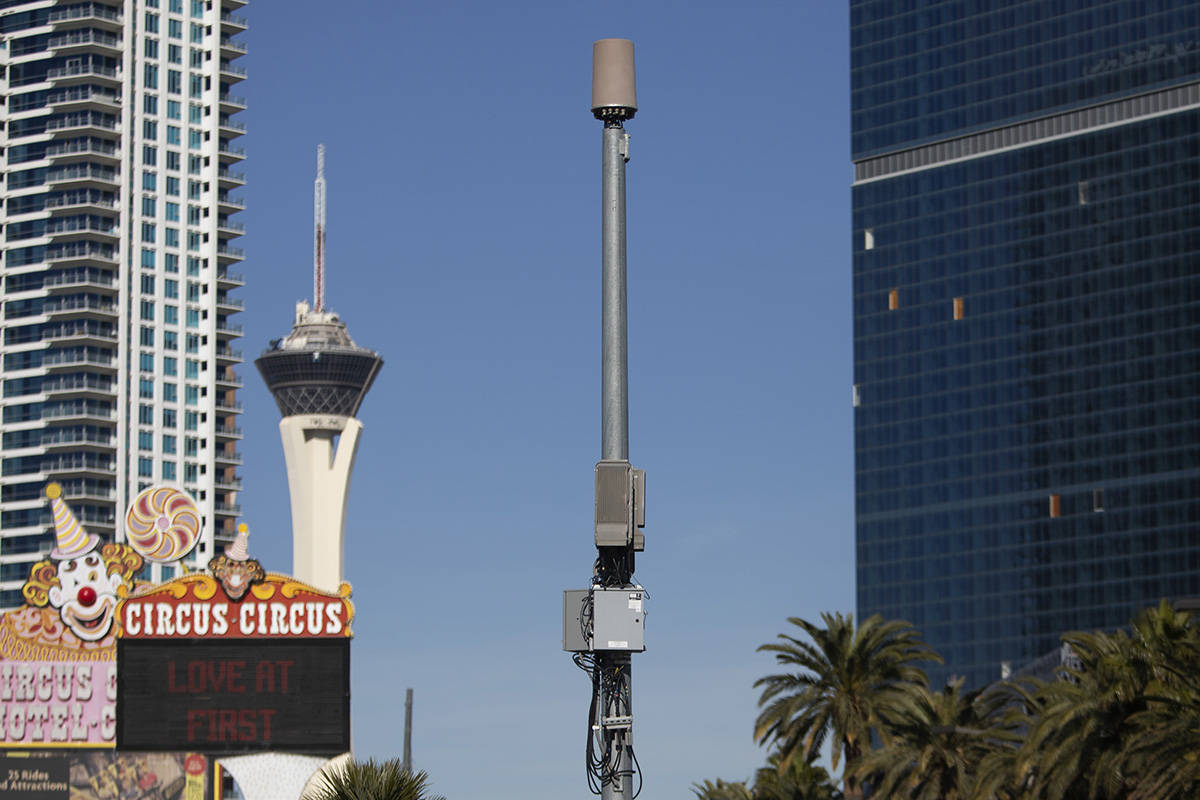 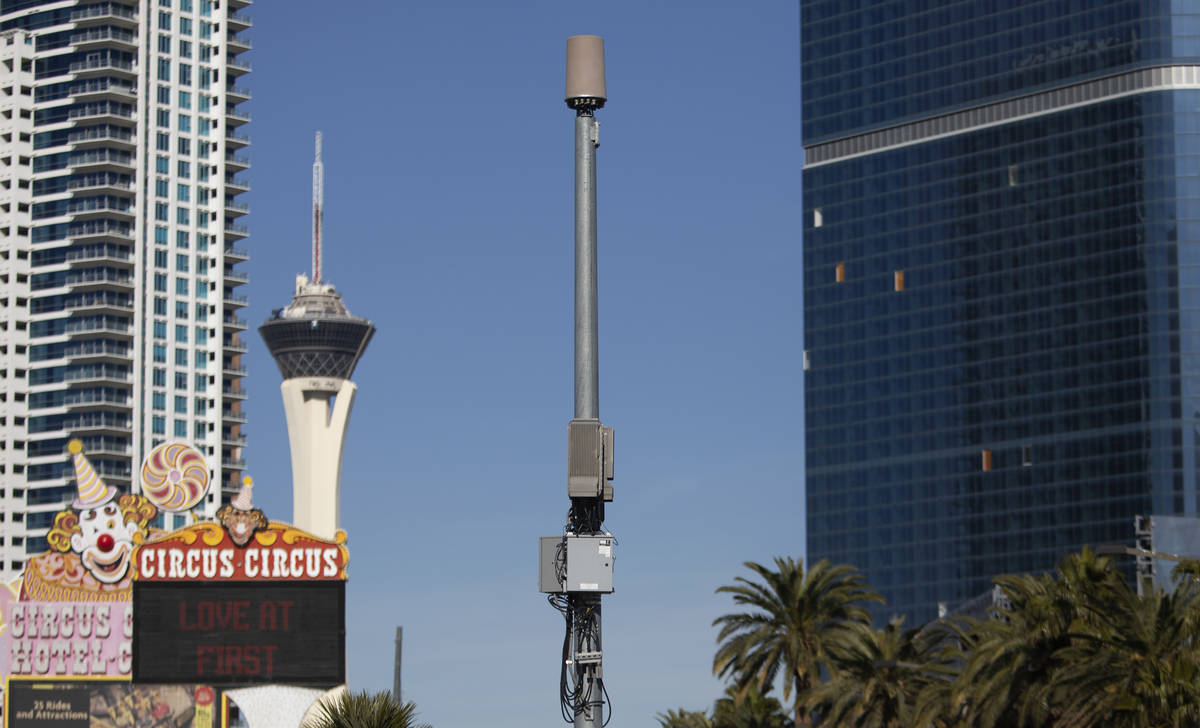 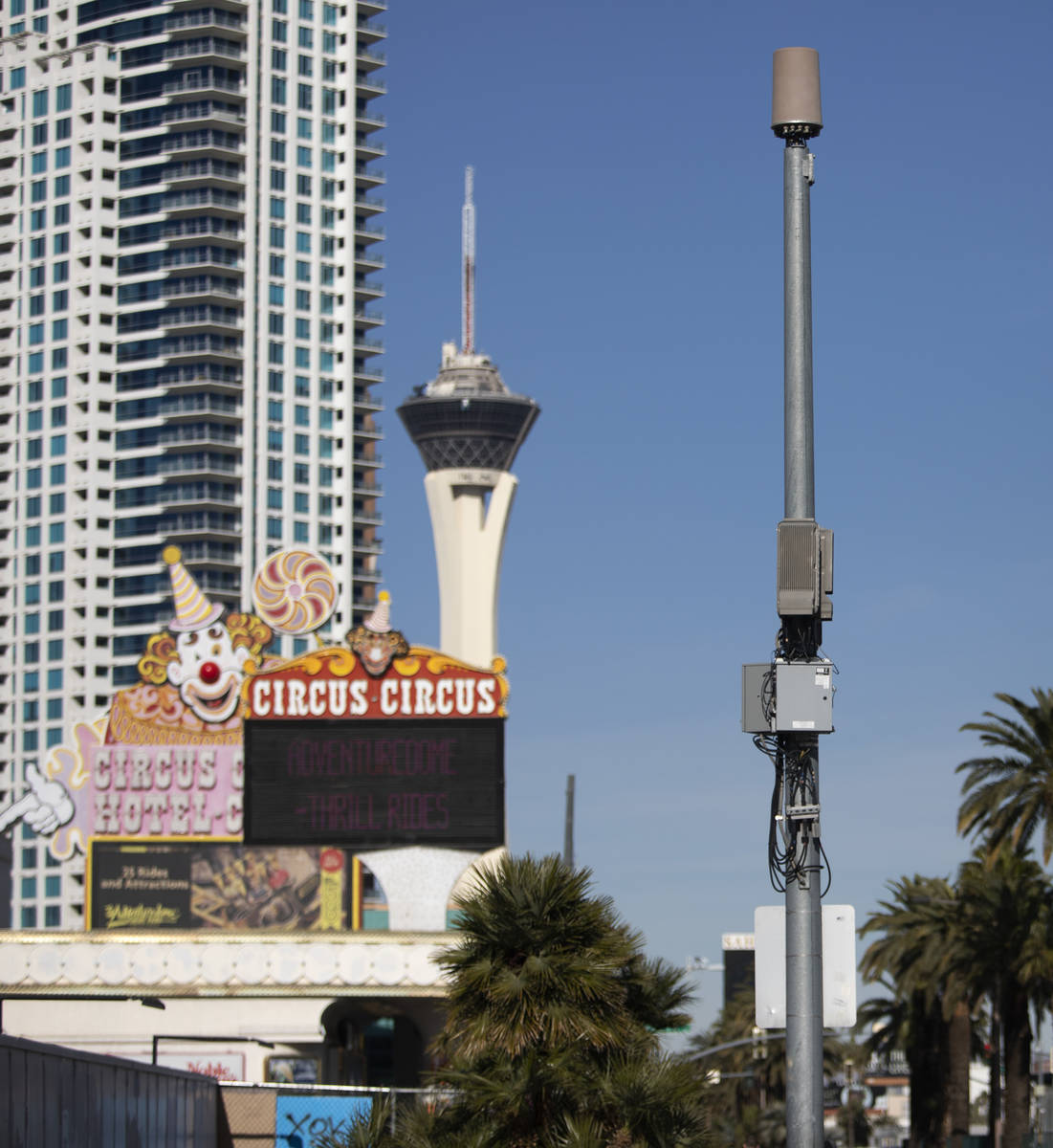 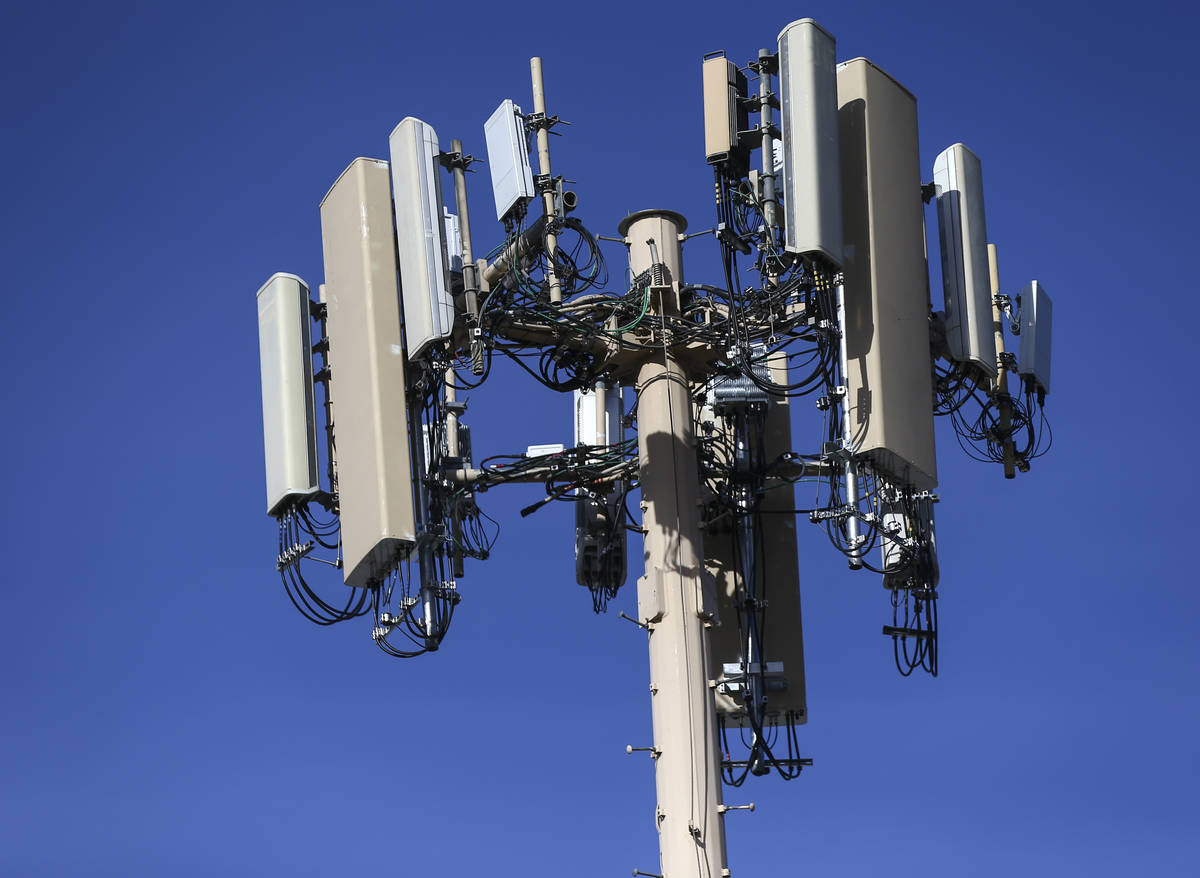 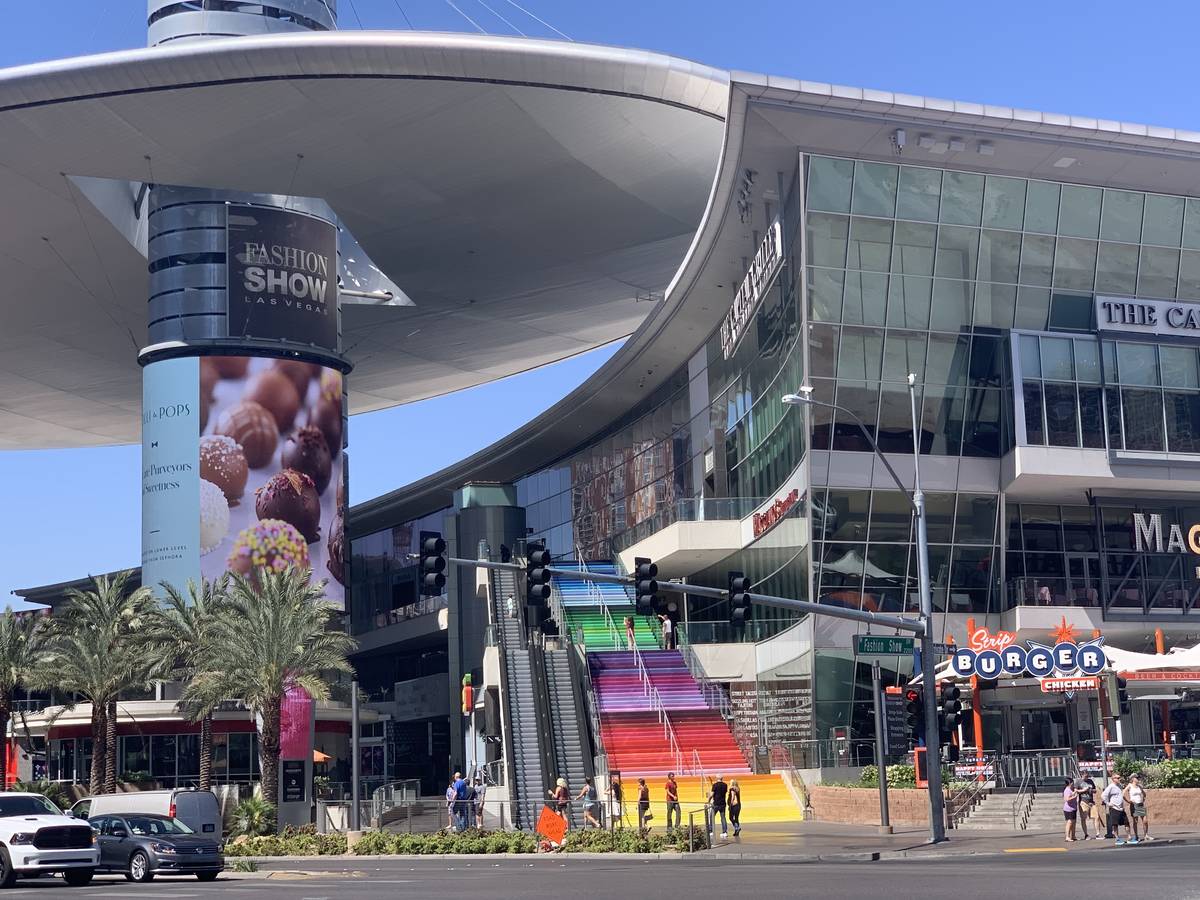 A 5G tower outside of Fashion Show on the Las Vegas Strip. The 5G+ antennas are located at the top left corner of the building, underneath the roof overhang, just above “The Capital Grille” sign. (Courtesy of AT&T)

5G made waves in 2020, but industry watchers say the best is yet to come — especially for tourism-driven cities like Las Vegas.

The mobile network is set to be a major topic at CES 2021, with seven sessions focusing on the evolving technology,including a kickoff keynote address from Verizon Chairman and CEO Hans Vestberg on Jan. 11.

“5G is just in the second inning of a nine-inning baseball game,” said Chris Pearson, President of 5G Americas, a wireless industry trade association. “There are many, many benefits we expect from 5G and even Next G networks over the coming years.”

“We’ve seen customers really enjoy the network,” she said. “They get to experience the fast speeds, low latency.”

The company has a “competitive build plan,” but Moore said there are no firm dates on when AT&T’s 5G will expand to cover the rest of the valley.

Mark McDiarmid of T-Mobile said Las Vegas’ connections to CES and other trade shows make it a great place to showcase the company’s 5G technology.

Verizon spokespeople did not respond to a request for comment.

Washington, D.C.-based market research company TeleGeography found 29 5G networks went live in the third quarter, bringing the total number of global 5G commercial networks to 143. Another 180 are expected by the end of the year.

Pearson said 5G can be a game-changer for cities with major events like Las Vegas, which can bring in tens of thousands of visitors for just one convention.

“5G connectivity can offer new possibilities through better connectivity, speeds, and lower latency for large crowds,” he said. “In areas of busy data traffic congestion, like airports or stadiums, enhanced mobile broadband allows for many more users to get a consistent streaming experience.”

The technology could also offer “a host of new possibilities” for the local entertainment industry by supplementing augmented or virtual reality, Pearson said.

Resort operators could also benefit from 5G down the line, since the networks come with built-in layers of security.

“(It reduces) vulnerabilities in … Internet of Things sensors and devices,” Pearson said. “These improvements could help the hospitality industry through lowering operational costs associated with fraud, as well as keeping guests safe and happy.”

Virginia Valentine, president of the Nevada Resort Association, also pointed out how local resort operators have recently made significant investments in touchless technologies like digital check-ins, ticketless events, mobile apps and QR codes, all of which are set to benefit from 5G.

“The expansion of 5G will be beneficial for visitors’ overall experience and ensure Las Vegas remains on the forefront of deploying the latest innovations,” she said. “5G will be particularly valuable when large events and trade shows and conventions return by allowing increased capacity and speed during high volume times when visitors are most active which will allow Las Vegas to keep our competitive edge over other destinations.”

“The big change from last year is it’s actually available,” said Gartner mobile services analyst Bill Menezes. “(In 2019) you had extremely limited availability, maybe a couple of spot developments and only a few devices that could use it. … It’s grown in availability.”

Today, there are 5G phones available from major smartphone manufacturers like Android and Apple, and carriers have expanded their 5G coverage exponentially.

The world added 225 million 5G subscribers between the third quarter of 2019 and 2020. 4G LTE, in comparison, took four years to gain that many users, according to a December news release from 5G Americas, citing London-based analyst and consultancy firm Omdia.

Omida expects roughly 236 million people to subscribe to 5G by the end of the year.

“Wireless customers took up 5G faster than any other generation of wireless before,” Pearson said. “5G is the obvious next step in wireless network technology and now more than ever fueled by the speedy need to stay connected in a socially distant world.”

Pearson said the “first wave” of 5G focused on the delivery of high data throughput, which helps stream high-quality video like 4K and 8K.

Beyond that, Menezes said there’s not much of a difference between 4G and 5G — yet. Much of the current 5G structure is non-standalone 5G, which is aided by the existing 4G infrastructure. This sort of coverage helps apps connect faster and offers higher-quality video streams, but Menezes said most 5G right now is only incrementally better than 4G in most locations.

“It will also be important for remote control operations of things like autonomous vehicles or drones,” he added.

A T-Mobile spokesman said the company’s standalone 5G, which launched nationwide in August, allows it to reach more rural areas and help penetrate deeper inside buildings in metropolitan areas such as Las Vegas.

McDiarmid of T-Mobile added that 5G is “completely changing” how app developers think about networking and consumers, and will bring immersive experiences like augmented reality or mixed reality to life in ways 4G can’t.

“I think it’s probably the most exciting revolution I’ve seen,” he said. “The technology is maturing at a tremendous pace. In terms of 5G, as an industry, we’re just getting going.”