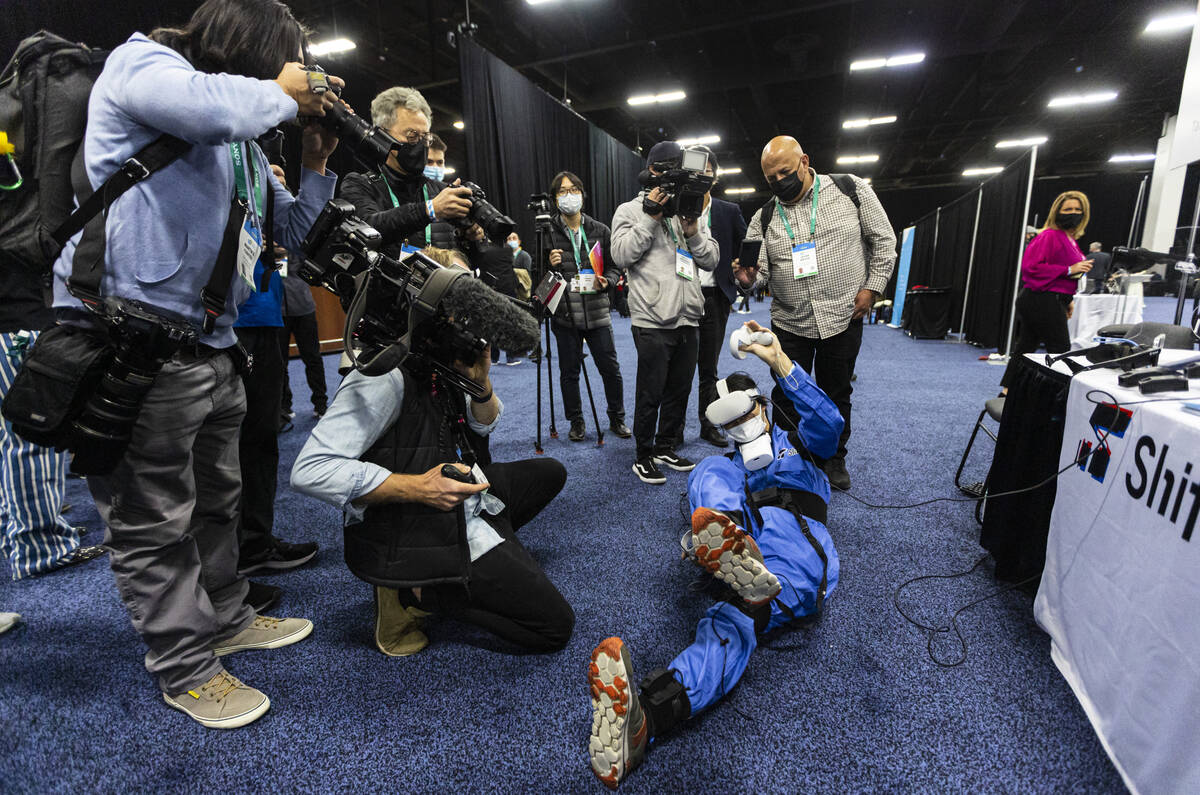 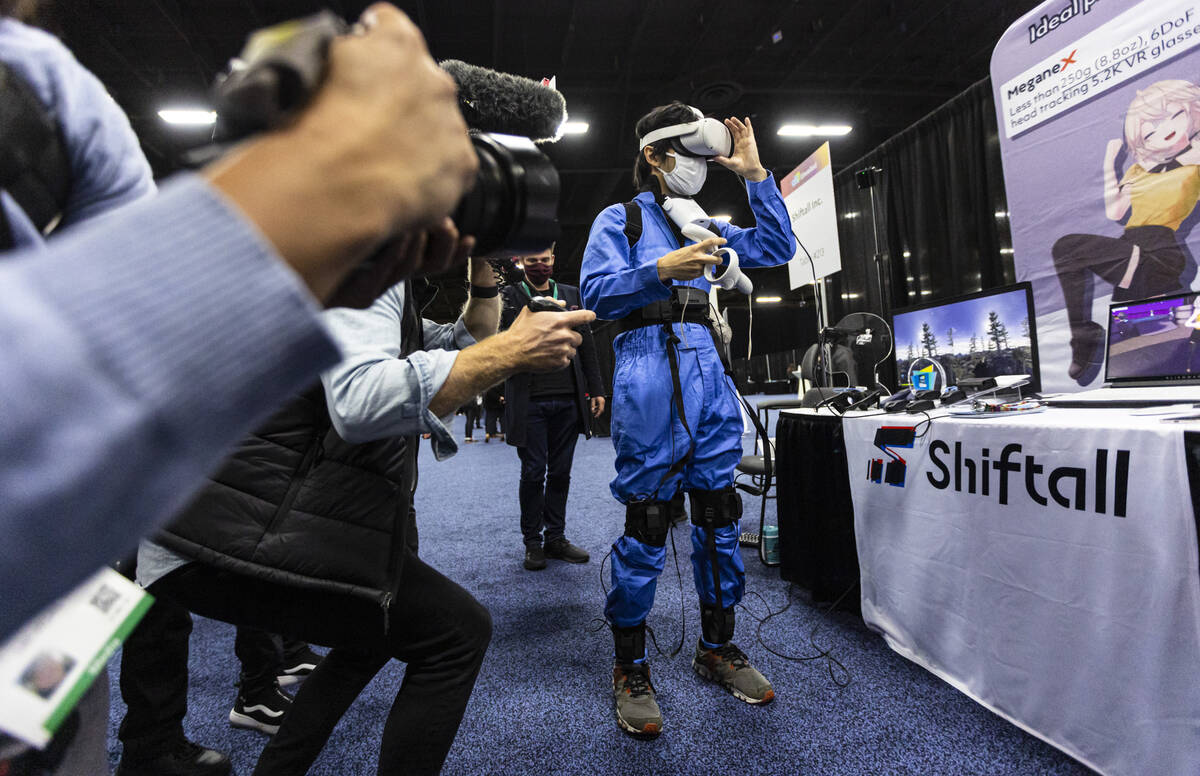 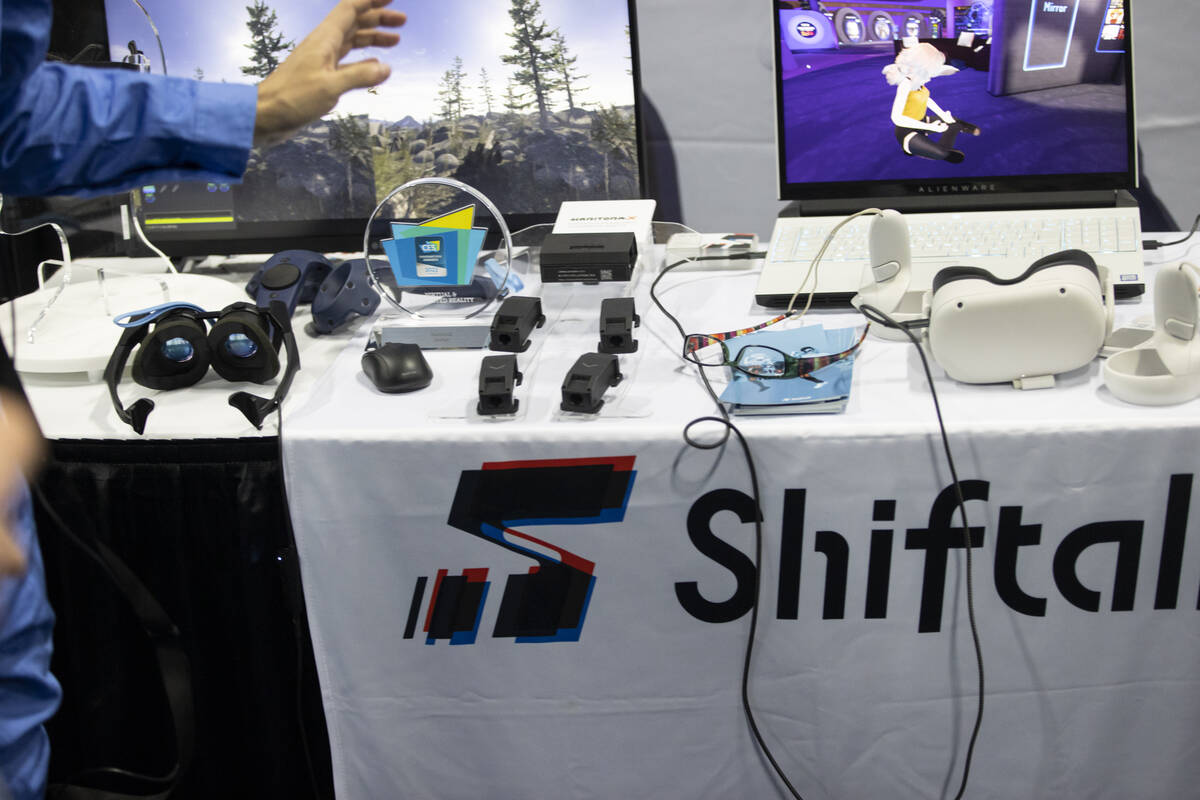 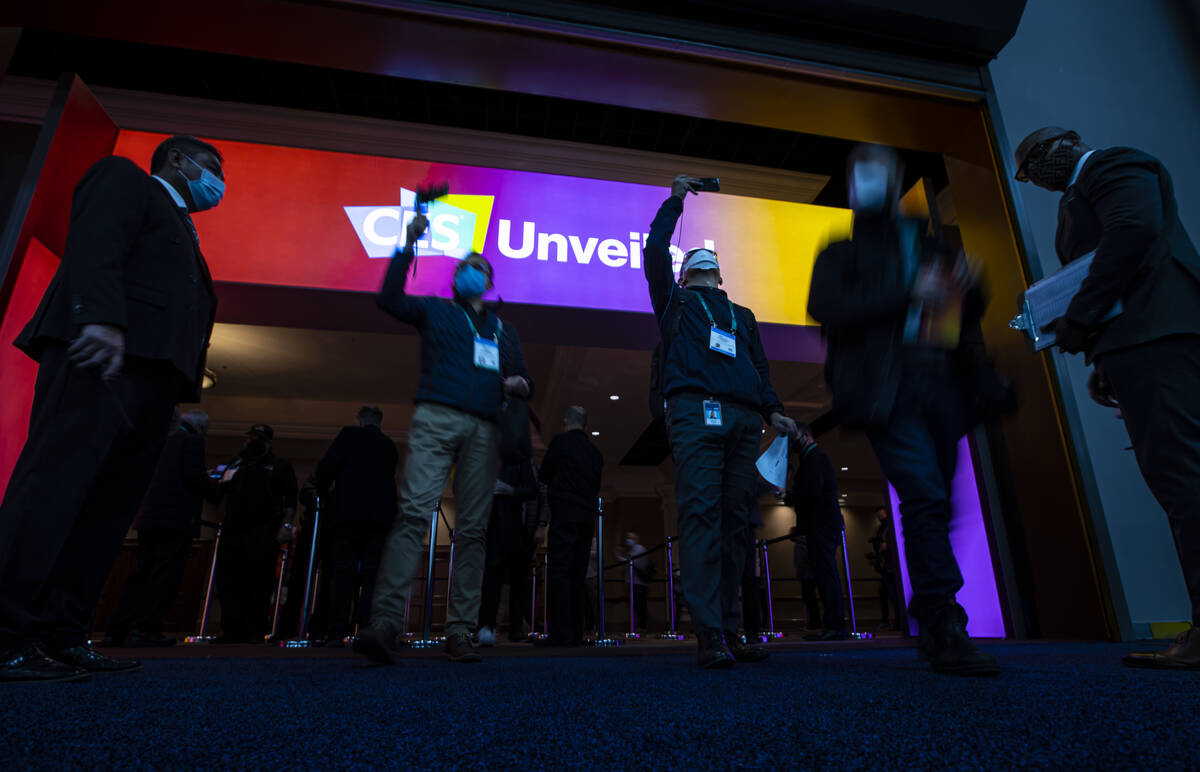 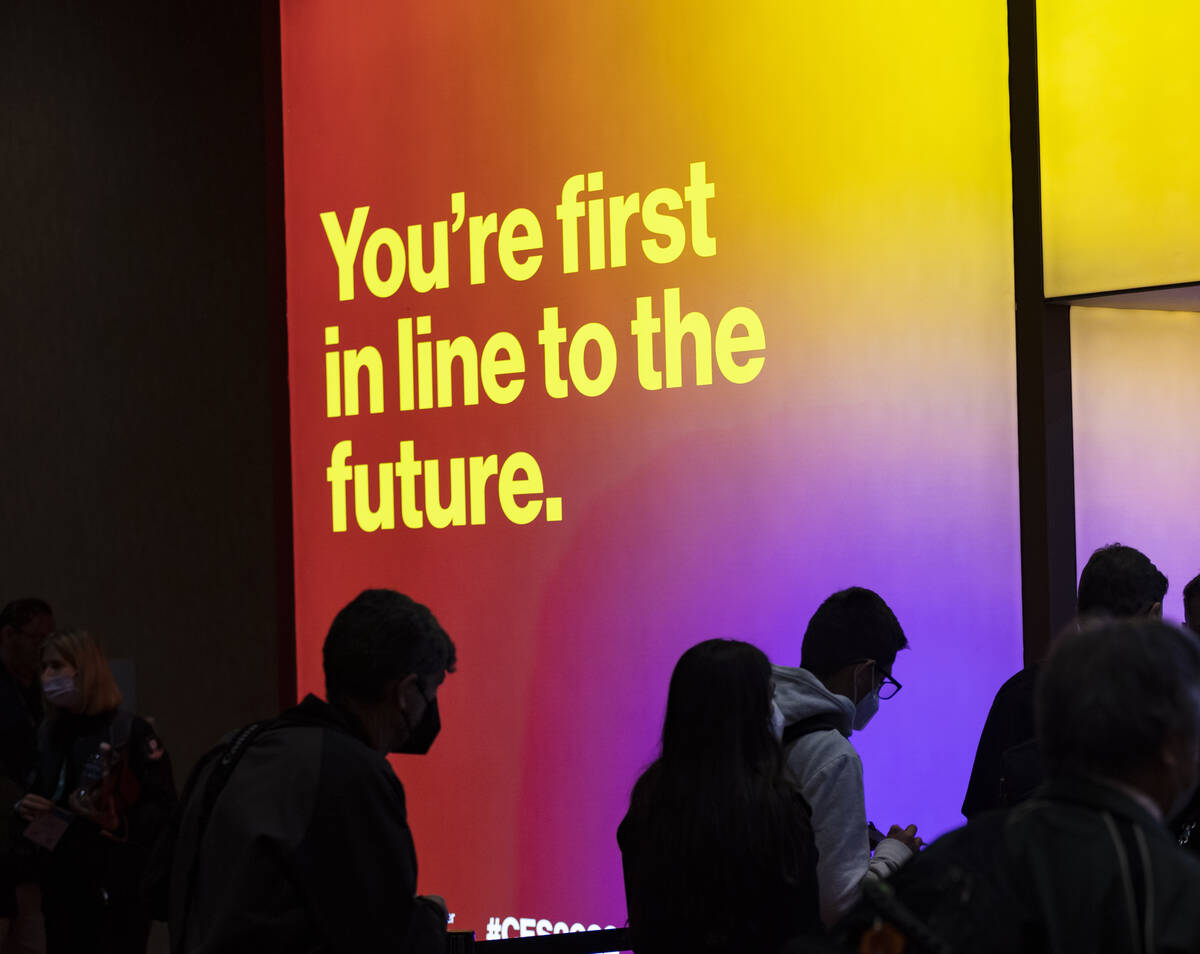 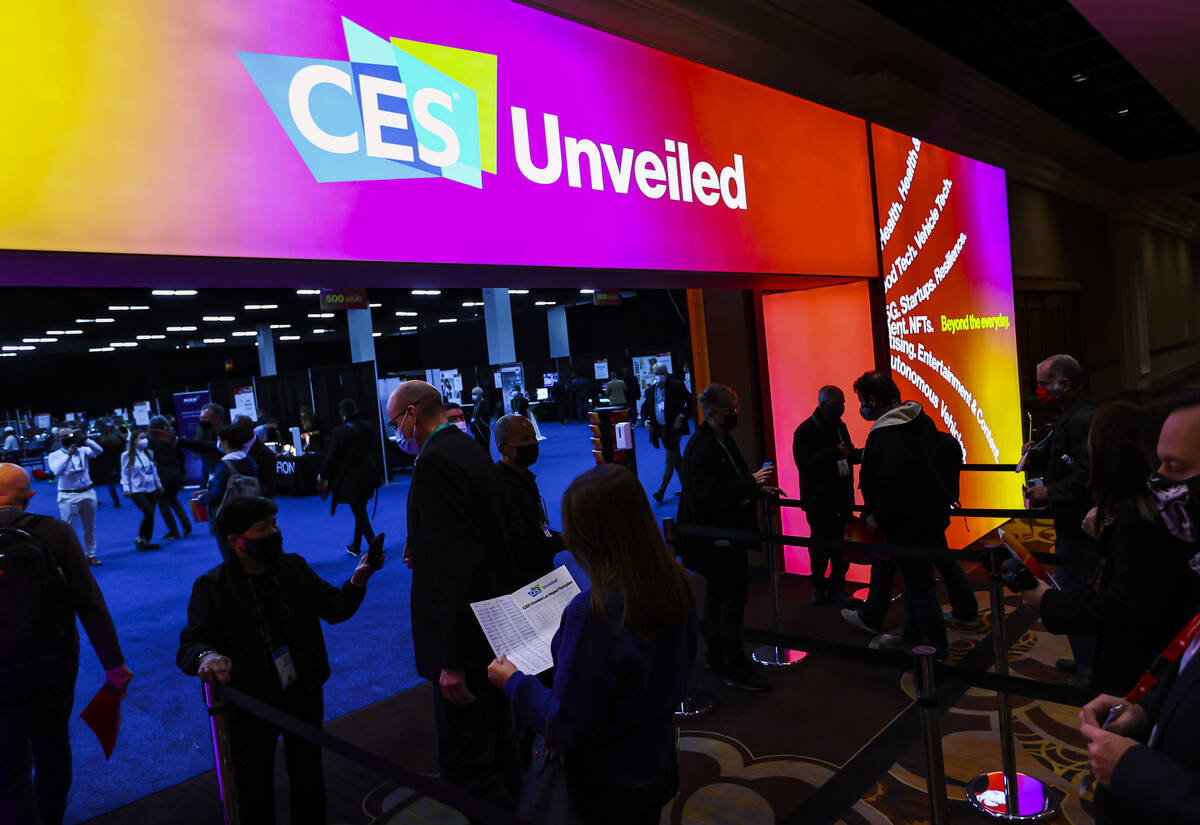 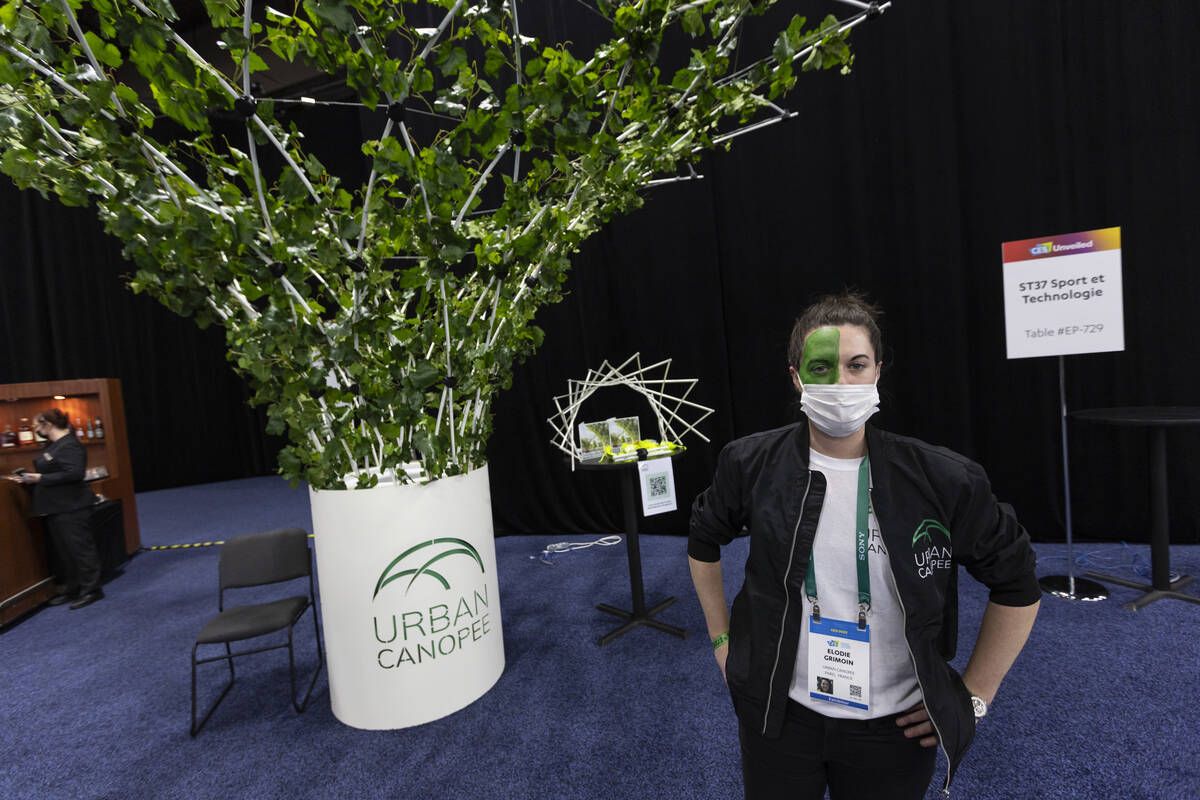 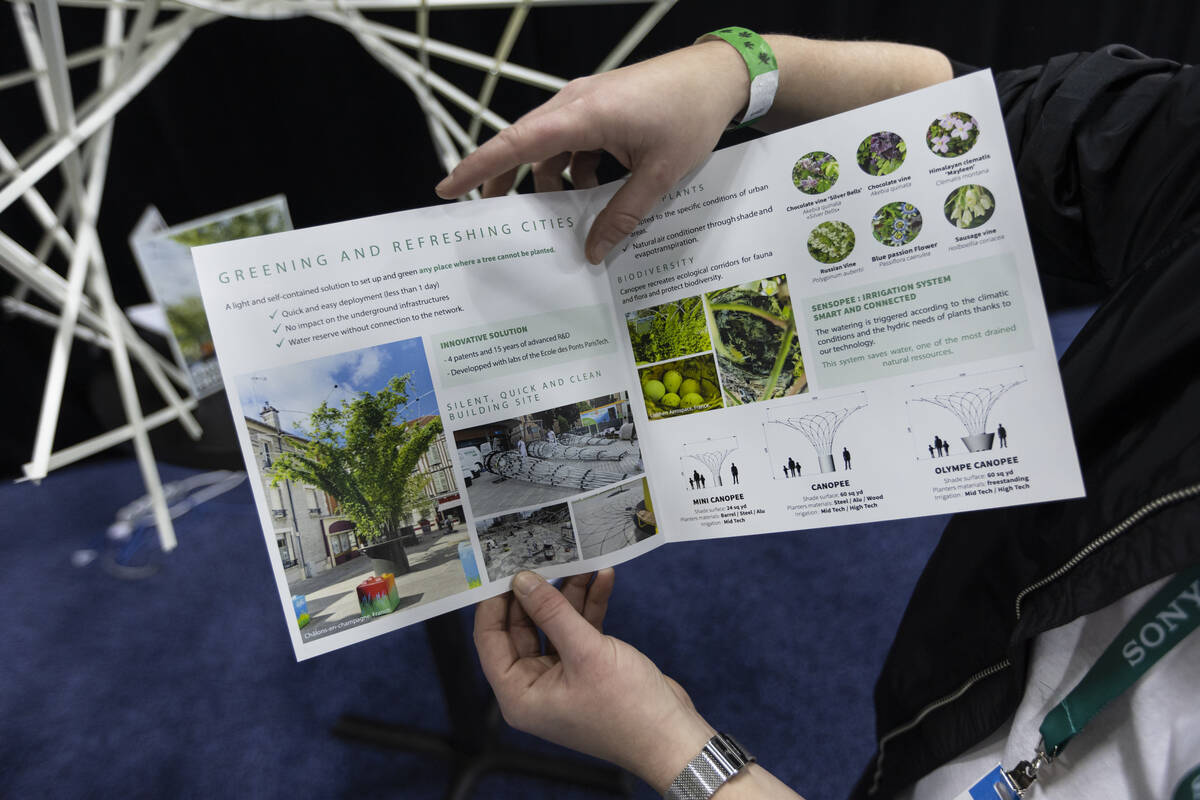 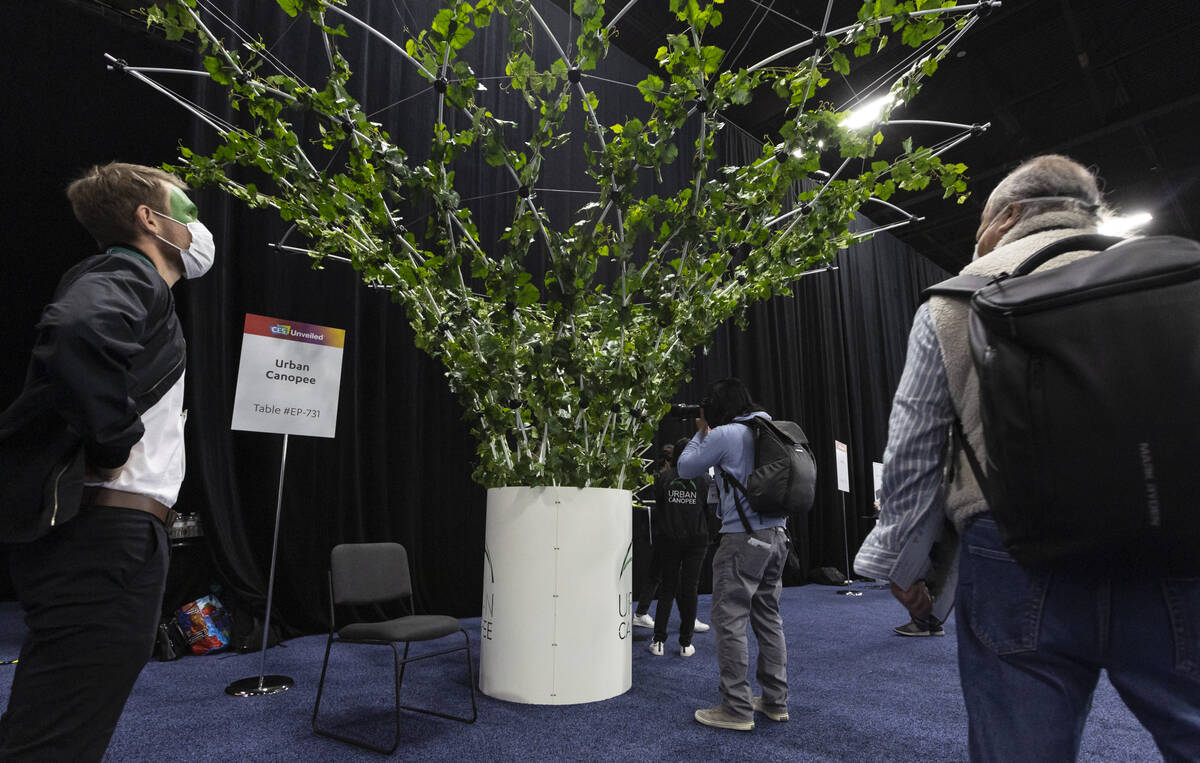 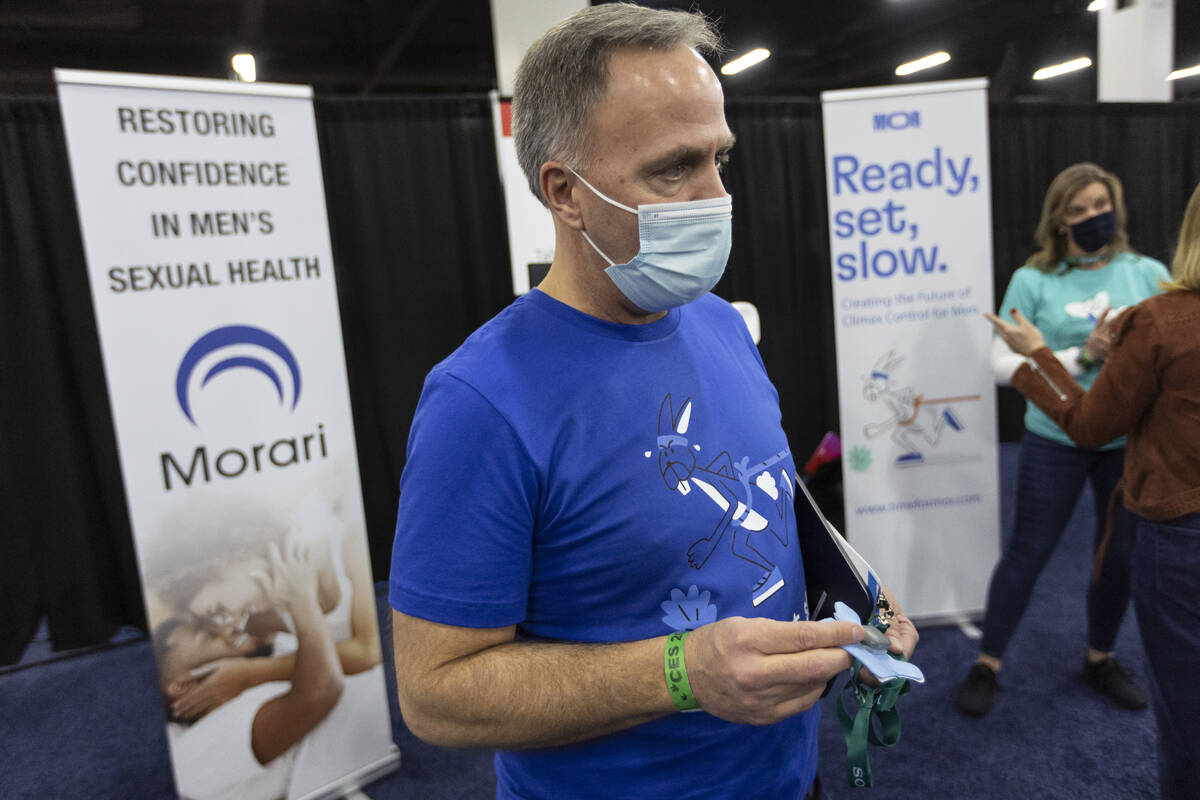 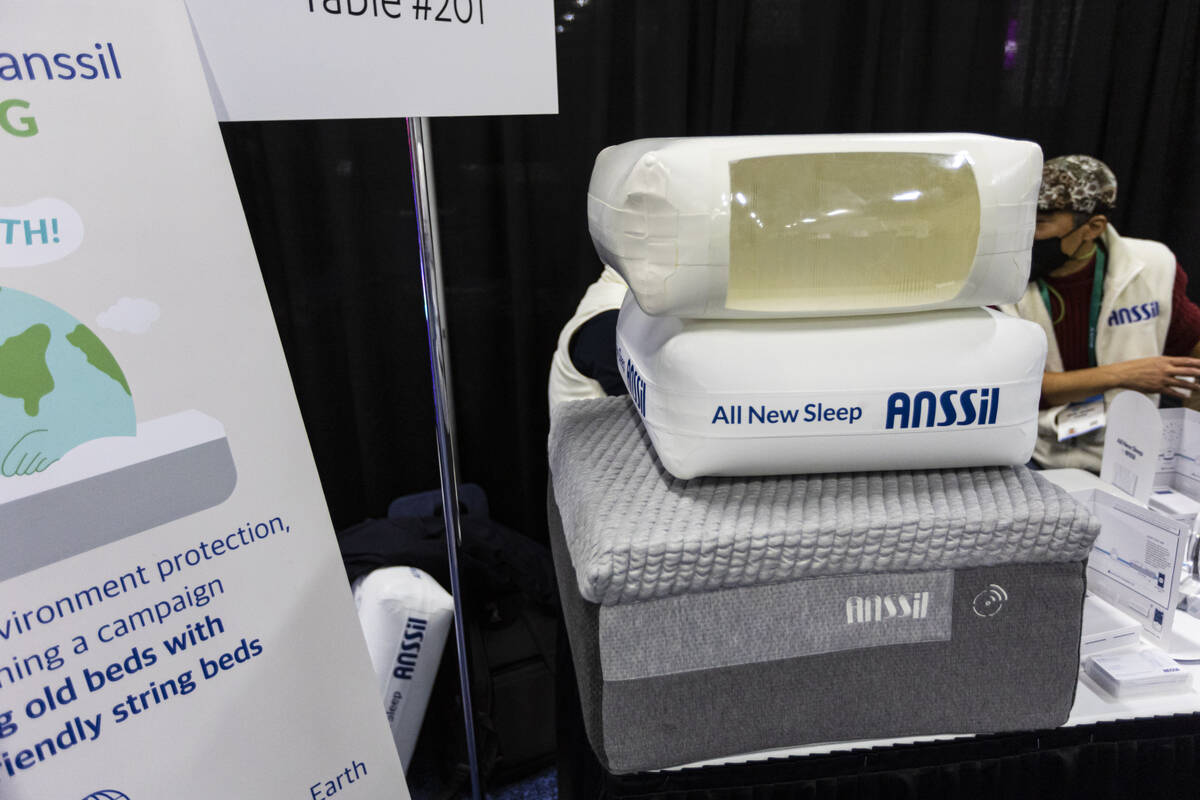 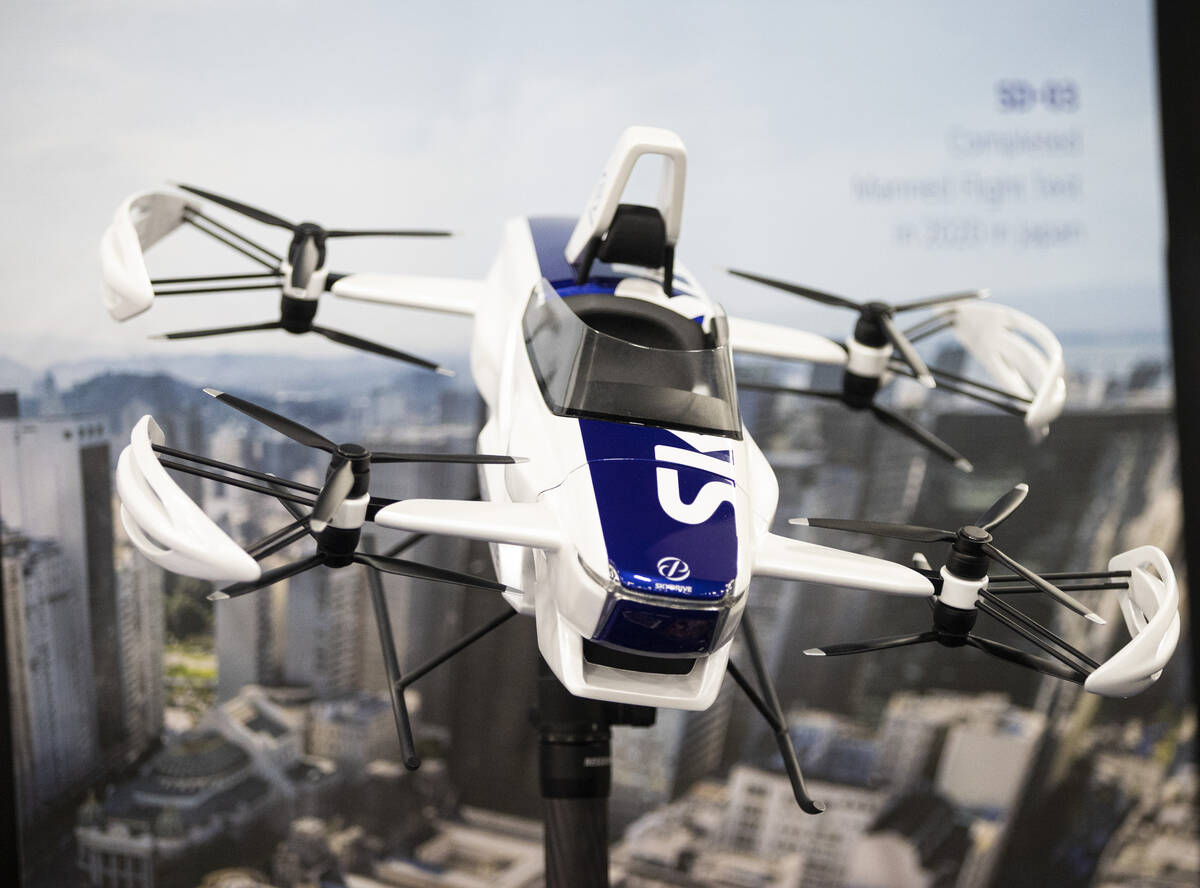 A model of a flying vehicle by SkyDrive its seen during the CES Unveiled event at the Mandalay Bay Convention Center Monday, Jan. 3, 2022, in Las Vegas. (Chase Stevens/Las Vegas Review-Journal) @csstevensphoto 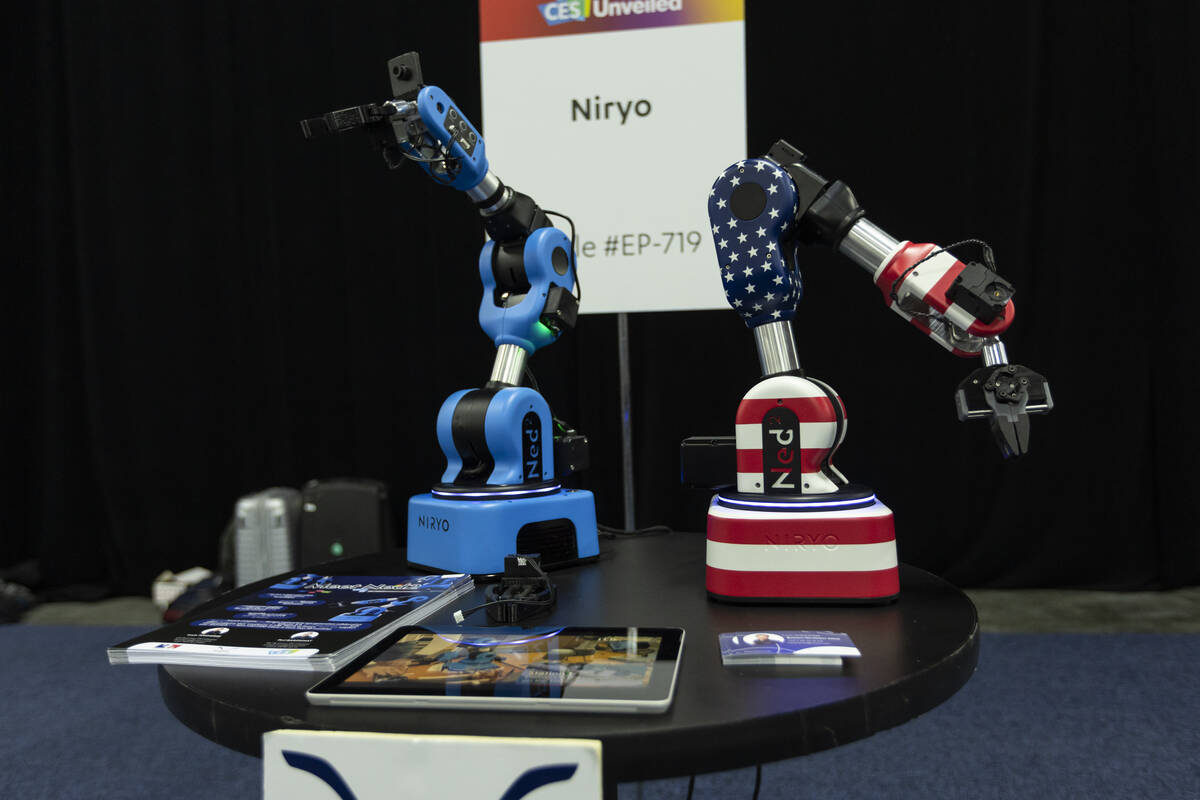 Ned, a robot designed for educational and training purposes, is seen at the Niryo booth at the CES Unveiled event at the Mandalay Bay Convention Center Monday, Jan. 3, 2022, in Las Vegas. (Chase Stevens/Las Vegas Review-Journal) @csstevensphoto

Despite several major exhibitors and keynote speakers pulling out in recent weeks, thousands of companies are still set to unveil their latest and greatest products when CES opens its trade show doors this week.

Ahead of Wednesday’s official opening, an invite-only media event Monday evening showcased some of the highlights and ground-breaking technology.

Monday’s Unveiled Las Vegas showcase featured more than 130 exhibitors, including Jabra, Kohler, Lutron Electronics and honorees of this year’s CES Innovation Awards, showing off their latest technologies for members of the press to experience before the show officially opens to attendees.

More than 2,200 exhibitors are planning to be on the CES show floor in person, according to the Consumer Technology Association, which produces the trade show. But some of the biggest names in tech have backed out of attending in-person this year over concerns over the spread of the COVID-19 omicron variant, including Microsoft Corp., Google, General Motors Co., Waymo, Lenovo Group, AT&T Inc., T-Mobile, Amazon, Twitter Inc., BMW, Advanced Micro Devices, Micro-Star International Co., Procter &Gamble Co. and Meta Platforms Inc., formerly known as Facebook.

The trade show floor will be open to general attendees from Wednesday through Friday at multiple convention venues, including the Las Vegas Convention Center, The Venetian Expo and Mandalay Bay Convention Center.

Here are some of the highlights from Monday’s media event:

South Korean startup Anssil believes that a bed connected to the Internet of Things that learns and adapts to your sleeping pattern is the key to the best night of sleep you can have. And the company says that its smart sleeping mattress made of 14 million strings will do just that.

It starts with body pressure sensors in the mattress that transmit data to an artificial intelligence server that learns how you sleep. Based on that data, the mattress’s firmness, temperature and humidity are adjusted in real time to fit each person’s needs.

“If you have a good sleep, you’ll have good posture. And you’re gonna be healthy. That’s all proven science,” said Dae Rhee, vice president of new business development for Anssil. “That data is going to be incorporated into this mattress and give you the best possible environments where you can really get a good night’s sleep.”

Better way to try on glasses

Trying on glasses has always presented a dilemma for some people: How do you know what those frames you’re trying on actually look like on you if you can’t see yourself clearly?

Fittingbox already allows customers to try on tens of thousands of different types of frames in its virtual mirror software that uses augmented reality. But the company is launching a new “Frame Removal” diminished reality feature at CES this year.

The newest feature removes the glasses that the customer is currently wearing on the screen and replaces them with any of the frames they are looking to try, all while still being able to still see clearly.

“For 600 million people, when they chose glasses it was a bet. It was an aunt or a sister telling them ‘Yeah, they look fine,’” said Stephanie Loutfi Le Grand, strategy and product marketing manager for Fittingbox.

The company believes that its diminished reality software will be a game changer for the eyewear industry, and it could be used not only in the app, but also on various websites and even in eyewear stores via a kiosk.

Shade, without the trees

In an urban heat island such as Las Vegas, shade on a blistering day can make all of the difference. French company Urban Canopee suggests its solution is green technology for pavement-covered areas unable to grow trees. Its canopy, available in three sizes, creates expanded shade by allowing climbing plants to grow on a structure up to 16 feet tall.

Canopees, or elaborate planters with smart irrigation systems, can be placed around cities or on private property that need more shade. Exhibitor Joanna Ovadia-Bruno said the “trees” of Russian vine, himalayan clematis and other climbing vines can cool down an area by about 4 to 8 degrees.

“We usually sell it to cities and private places,” she said.

Some tech products were expected: expanded virtual-reality headsets and accessories to make your avatar move beyond its head and hands; improved smart lights and baby-sleep timers; e-snow bikes and better electric batteries for a fossil fuel-less future.

While many of the products displayed were upgrades to modern technology in many homes — like better beds and lighting — others sought to innovate in new areas. Morari Medical, a Minneapolis-based men’s sexual health company, was displaying its Mor device, an adhesive patch and battery that uses neurotransmission to extend pleasure.

“What we’re basically doing is just turning down the volume of nerve activity temporarily,” CEO Jeff Bennett said of the product expected to launch direct-to-consumer sales next year. “It uses neurostimulation, which is (used) all over — for Parkinson’s disorder, sore muscles — and we’re taking it down there where no one’s done that before.”

Bennett said the company was here in 2020, when sex tech first became its own category at CES. He said the acknowledgement is helping the industry grow and reach new customers for the taboo but consumer-focused products.

“For us, it’s really demonstrating sexual health and wellness as an industry that is a multibillion-dollar space that many people don’t like to talk about or acknowledge, but it’s only growing. For consumer technology such as this, what better place to talk about it.”