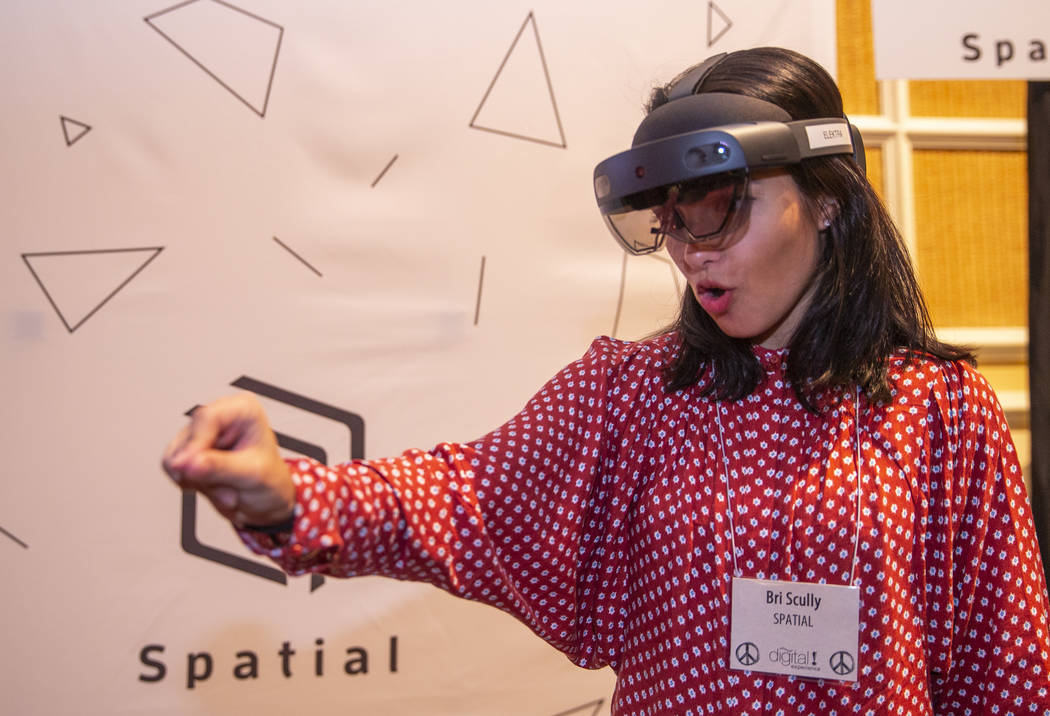 Bri Scully demonstrates how to use Spatial for computer-generated workplaces during Pepcom's Digital Experience! CES at The Mirage Events Center on Monday Jan. 6, 2020, in Las Vegas. This is a media event before the CES trade show which officially runs Tuesday through Friday. (L.E. Baskow/Las Vegas Review-Journal) 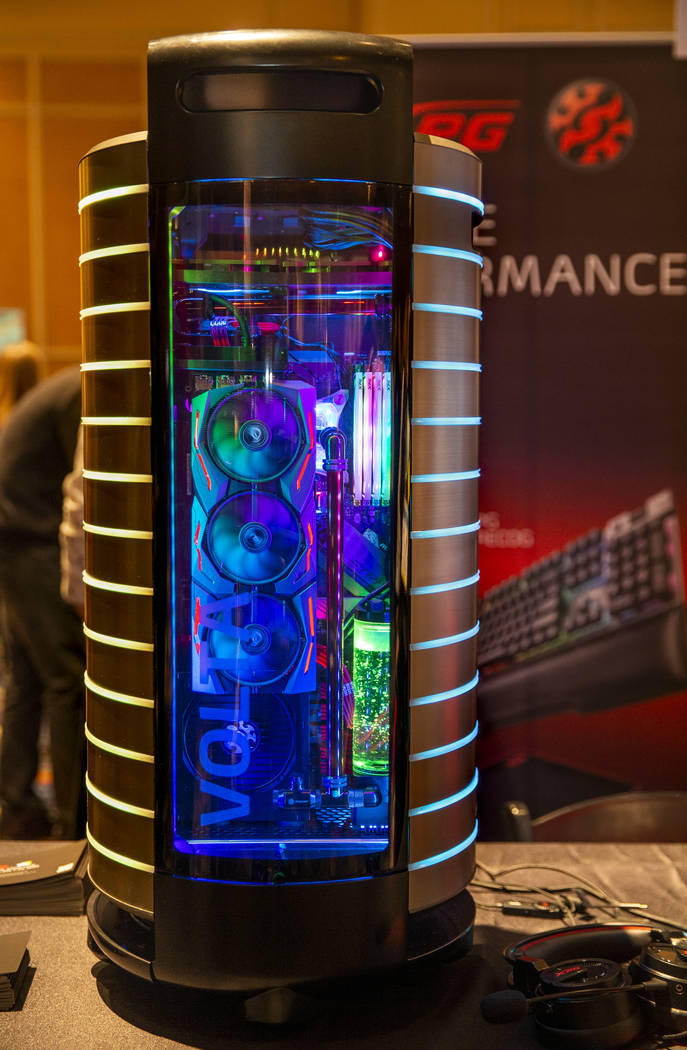 A new Volta high-end gaming PC tower on display during Pepcom's Digital Experience! CES at The Mirage Events Center on Monday Jan. 6, 2020, in Las Vegas. This is a media event before the CES trade show which officially runs Tuesday through Friday. (L.E. Baskow/Las Vegas Review-Journal) 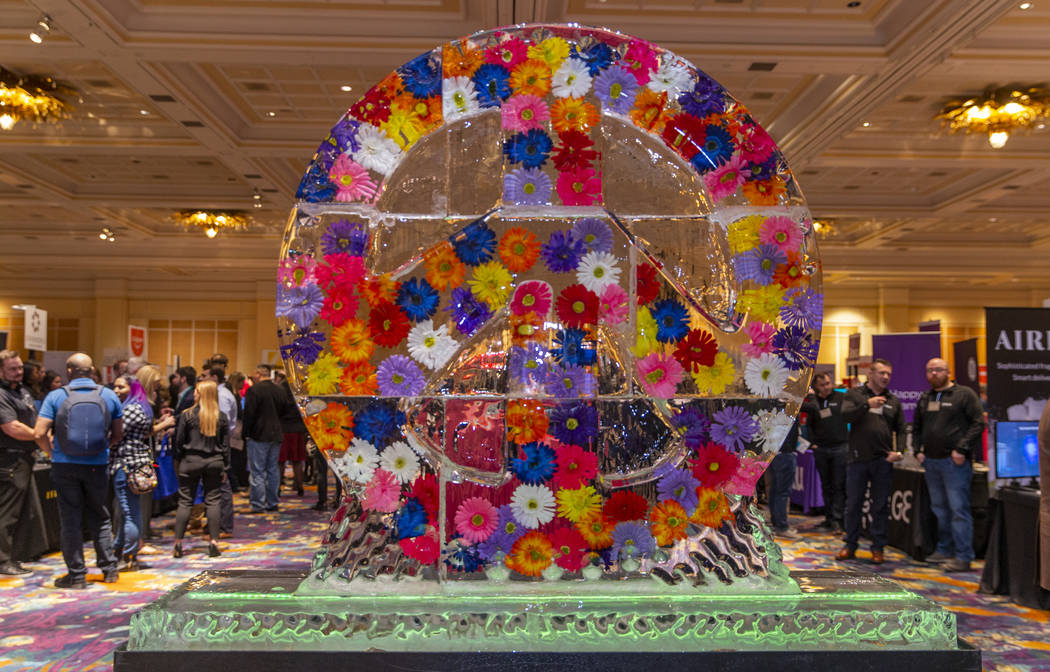 A peace sign frozen with flowers inside greets attendees during Pepcom's Digital Experience! CES at The Mirage Events Center on Monday Jan. 6, 2020, in Las Vegas. This is a media event before the CES trade show which officially runs Tuesday through Friday. (L.E. Baskow/Las Vegas Review-Journal) 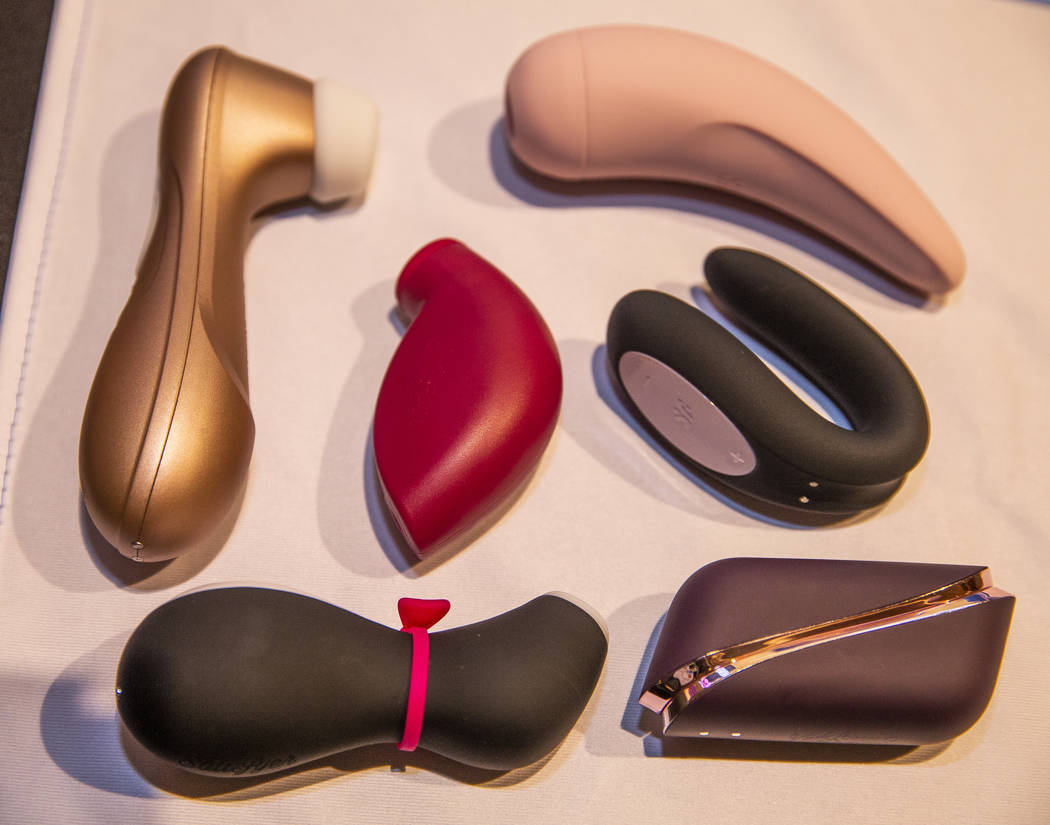 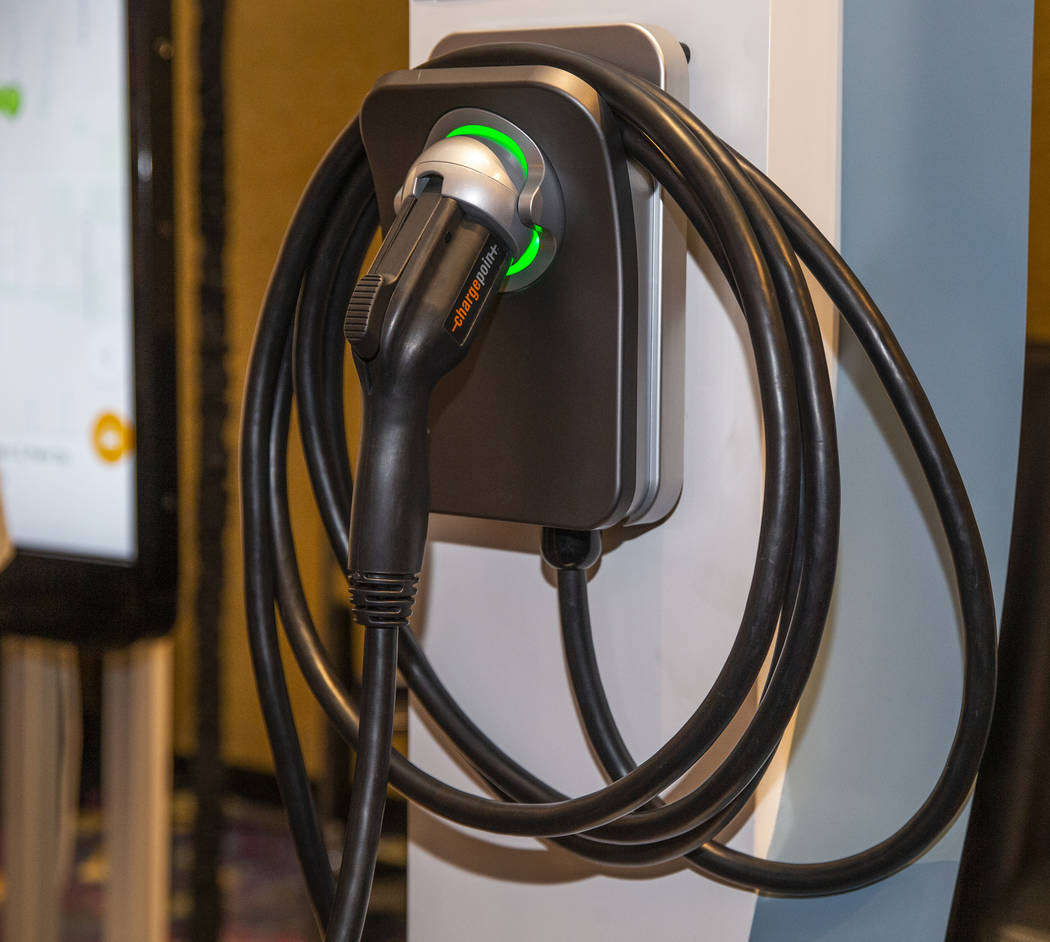 A new ChargePoint electric vehicle (EV) charging station on display during Pepcom's Digital Experience! CES at The Mirage Events Center on Monday Jan. 6, 2020, in Las Vegas. This is a media event before the CES trade show which officially runs Tuesday through Friday. (L.E. Baskow/Las Vegas Review-Journal) 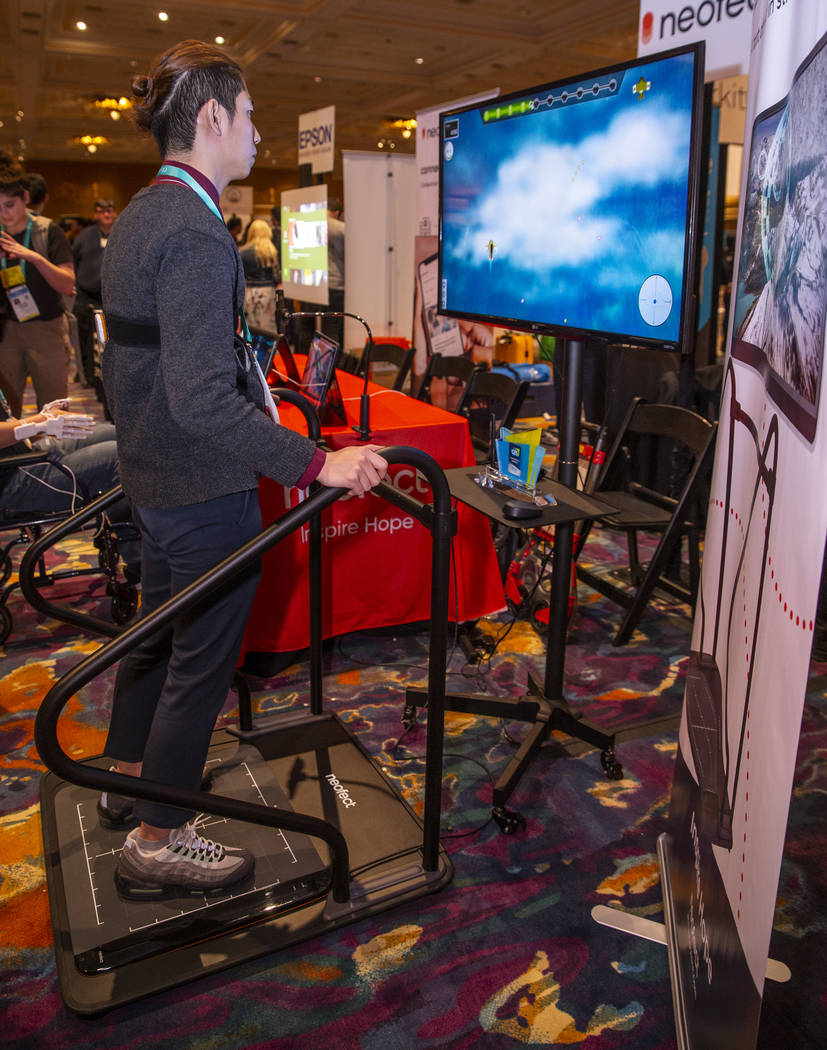 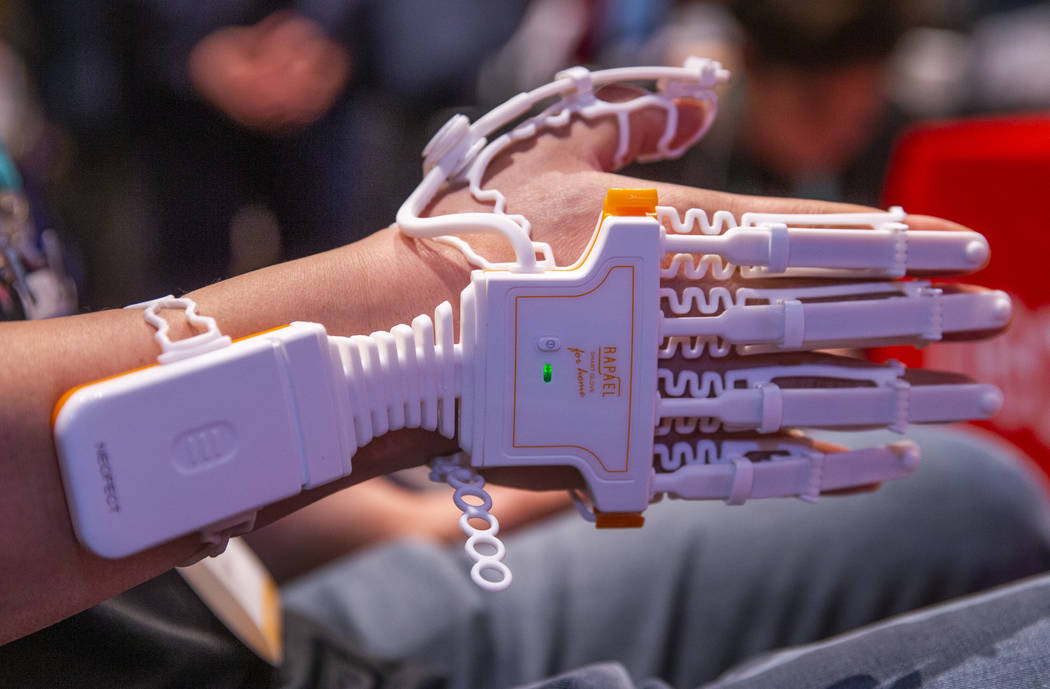 Poh Oh demonstrates the Neofect Smart Glove for injury rehabilitation during Pepcom's Digital Experience! CES at The Mirage Events Center on Monday Jan. 6, 2020, in Las Vegas. This is a media event before the CES trade show which officially runs Tuesday through Friday. (L.E. Baskow/Las Vegas Review-Journal) 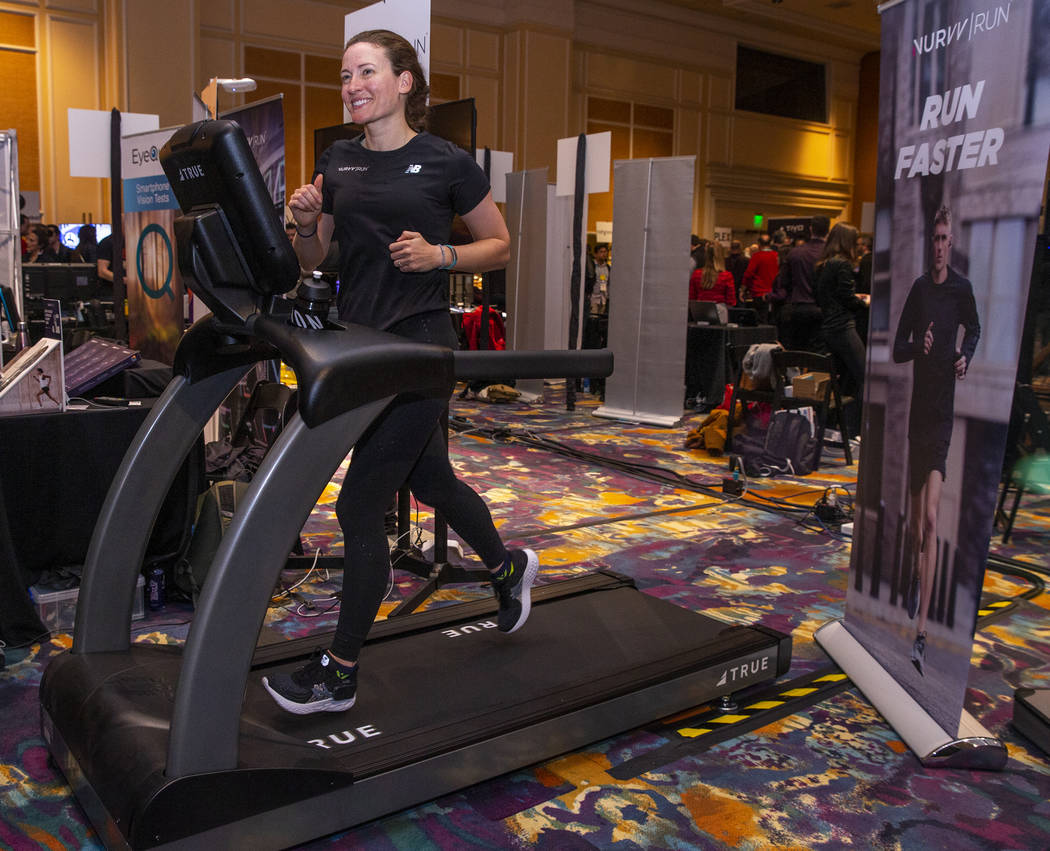 NURVV Run is a set of iPhone-connected insoles worn inside the shoes that are designed to analyze running habits on display during Pepcom's Digital Experience! CES at The Mirage Events Center on Monday Jan. 6, 2020, in Las Vegas. This is a media event before the CES trade show which officially runs Tuesday through Friday. (L.E. Baskow/Las Vegas Review-Journal) 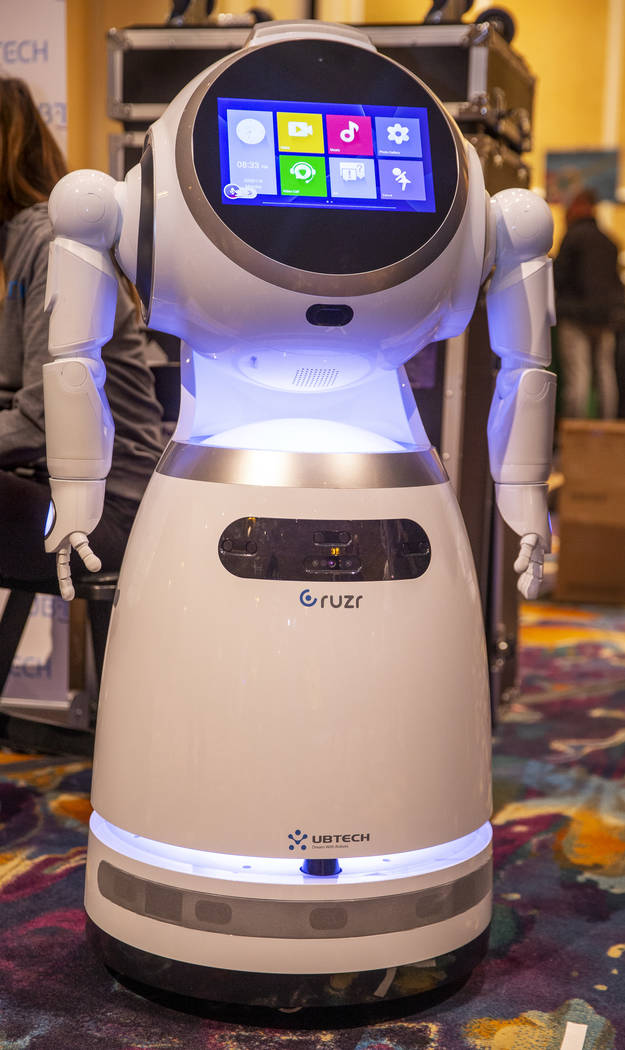 The Cruzr cloud-based intelligent humanoid service robot by UBTECH on display during Pepcom's Digital Experience! CES at The Mirage Events Center on Monday Jan. 6, 2020, in Las Vegas. This is a media event before the CES trade show which officially runs Tuesday through Friday. (L.E. Baskow/Las Vegas Review-Journal) 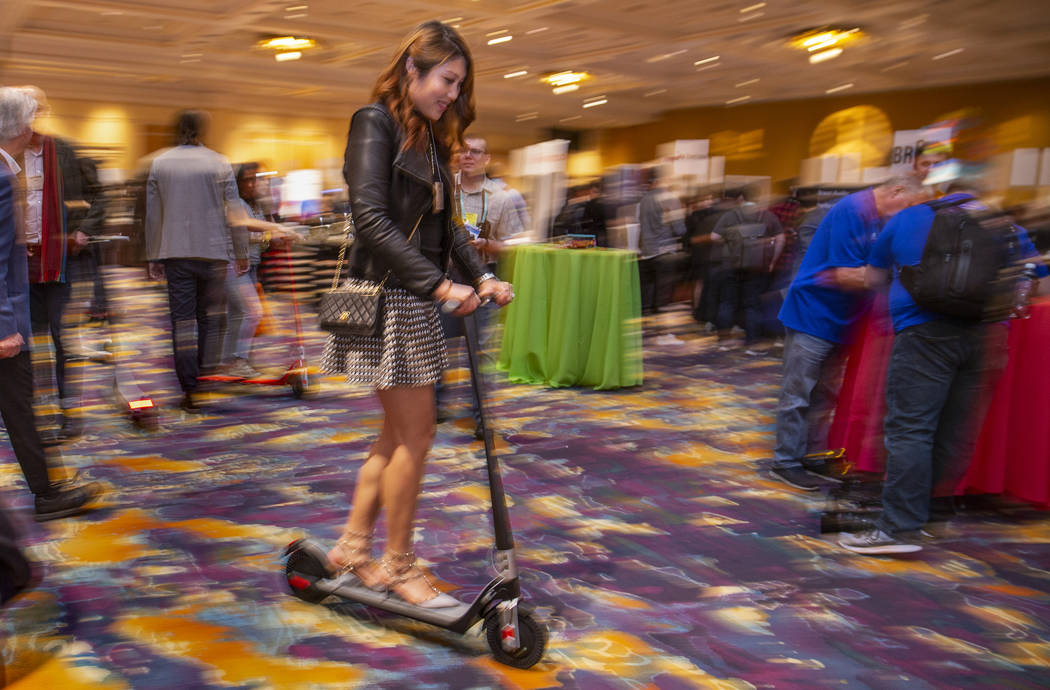 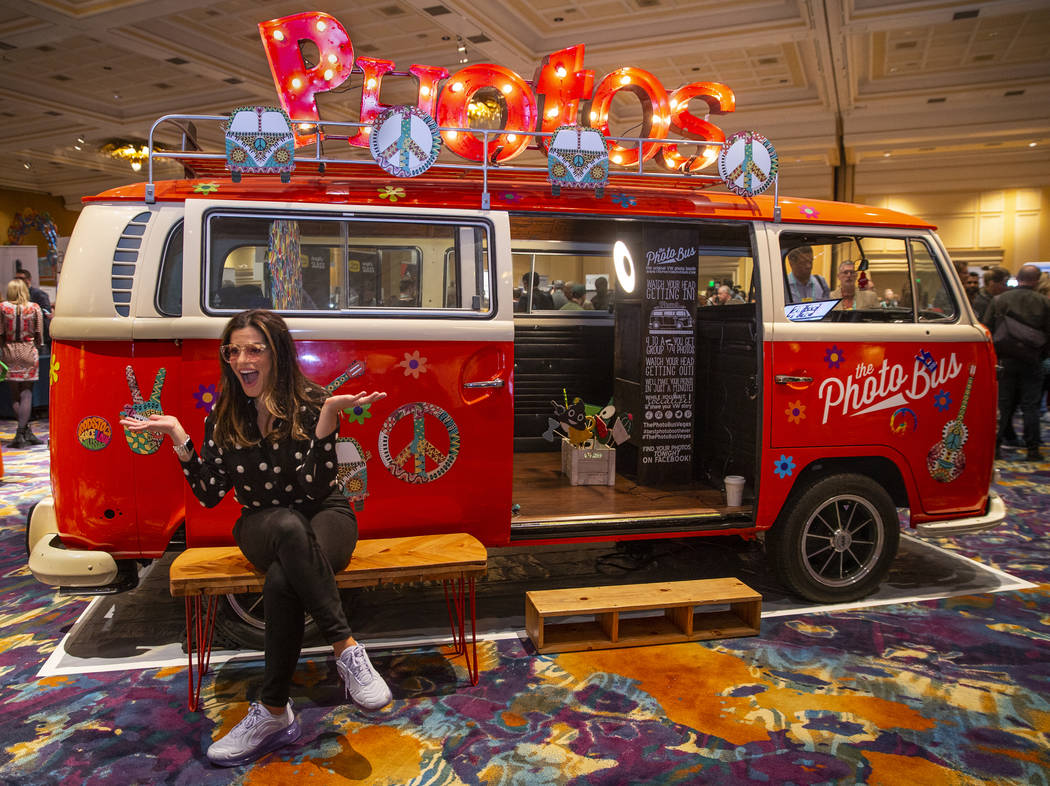 Attendees were treated to images inside the Photo Bus during Pepcom's Digital Experience! CES at The Mirage Events Center on Monday Jan. 6, 2020, in Las Vegas. This is a media event before the CES trade show which officially runs Tuesday through Friday. (L.E. Baskow/Las Vegas Review-Journal)

On the eve of CES 2020, more than 100 companies crammed into one ballroom at The Mirage Events Center to clamour for media attention ahead of the four-day conference and floor show.

The Pepcom Digital Experience on Monday night gave reporters and bloggers a chance to preview some of the products that will appear on the CES show floor without the chaos of the actual conference.

From fun gadgets that upgrade daily life to groundbreaking accessibility technology, here’s what stood out at Monday’s showcase.

Spatial wants to give you the ability to chat with a hologram.

“It’s really a replacement for video conferencing or Slack, even,” CEO and co-founder Anand Agarawala said.

Put on a Spatial headset and you’ll be able to have a conversation with an avatar of someone from afar. Reach out your hand like you’re holding a pencil and you can draw in the air.

Agarawala said the technology spent three years in development. It debuted last year, but could have strong initial use by later this year, he said. Agarawala suspects widespread usage will come around next year.

OVIS Suitcase, an autonomous driving system within a carry-on announced its official product launch Monday with a 20 percent off coupon to celebrate its inaugural laps around the digital experience floor.

The carry-on uses five cameras to assess the consumer’s face and detect its surroundings, to avoid hitting objects and follow the user. It also comes with a wearable device that uses bluetooth to track users in crowds when the camera can’t locate.

ForwardX Robotics premiered a prototype in 2018 and 2019 before an official launch this year. The product is selling for $799 this year.

One interface for the whole Google suite, complete with two white lights and a dark mirror. The Smart Mirror from Capstone premiered Monday night after a soft launch last year.

“As you’re brushing your teeth you can check your email. if you want to look up a makeup video tutorial you can look that up with Google assistant while checking your morning commute,” said sales operator Jonathan Caparco. “I can set up routines where I can say, ‘Google, goodnight,’ and the doors will lock, the lights will go off and I can have my Roomba start up — all through the mirror.”

The mirror will auto update and holds an 8-hour charge when disconnected from the stand. Capstone is selling the rectangular, floating, full-length and wardrobe mirror throughout CES.

Phonak is trying to change the way people look at hearing aids by combining both form and function in its new Virto Black line.

The Virto Black is the world’s first line of custom-made hearing aids that can stream audio from Bluetooth-enabled devices like iOS and Android phones, John Urbaniak, a spokesman for Phonak, said. Microphones in the hearing aids allow them to work like a wireless headset and the devices include a hands-free feature to answer or decline calls at the press of a button, without having to dig for a phone. The hearing aids are customized and 3D printed to fit individual wearers’ ears, and can be adjusted using a Phonak app. Unlike most traditional hearing aids, the Virto Black line is meant to be seen. The hearing aids are designed to look more like wireless earbuds than a medical device.

“The last 50 years or so, hearing aid manufacturing has always been smaller and smaller and more invisible,” said John Urbaniak, a spokesman for the company. “Everyone wants to hide their hearing aids.”

Urbaniak said Phonak is trying to tackle the stigma surrounding hearing aids with the Virto Black.

“It’s meant to be seen so that it can make hearing aids very commonplace, so that people should have nothing to hide.”

Virto Black will hit the market on Feb. 19 and will be available through licensed hearing care professionals.

Neofect develops therapy products for those who have experienced medical issues such as a stroke.

“The whole mission for our company really is to give people a more engaging solution for therapy and just make therapy more fun,” Cummings said.

Neofect’s flagship devices is a glove that allows people in rehab to use repetitive motions. It interacts with a video game on screen, taking some of the monotony out of rehabilitation.

New this year is the company’s smart balance pad for leg therapy. Cummings likened it to Dance Dance Revolution, but for therapy.

“For me and you, it’s an easy game,” he said. “But for somebody that’s recovering from a stroke, it’s hard. They need to do repetitions and they need to kind of get back on their feet, so to speak.”

Imagine a device that’s the exact opposite of a microwave. That’s the concept behind the Juno beverage cooler, a new gadget that can chill a drink as large as a champagne bottle in about two minutes.

Though it’s designed for drinks, Turk said the Juno can chill just about anything you can fit in it.

“I like grapes really cold, so you stick that into a container, put it through and they come out almost frozen,” Turk said.

The Juno chiller hit the market Tuesday and retails for $299, but it’s available for preorder at $199 on IndieGoGo.

CES will run Tuesday through Friday across the Las Vegas Strip and is sponsored by the Consumer Technology Association. More than 170,000 people are expected to attend.