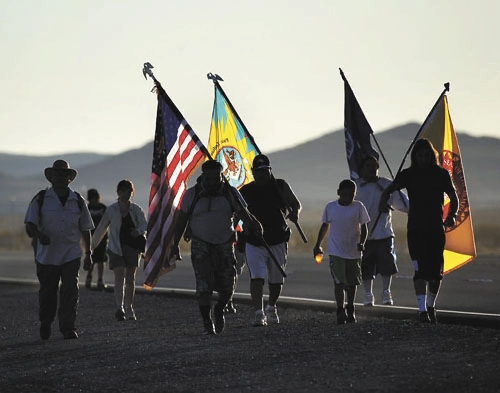 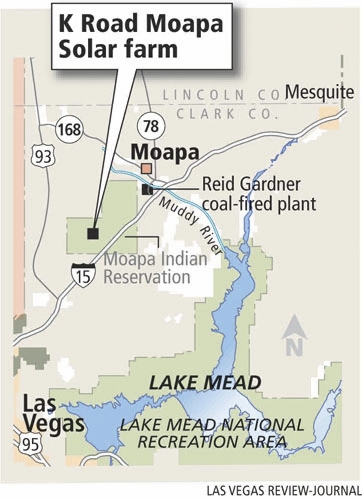 The sun is shining more brightly on the Moapa River Indian Reservation today.

Council members for the city of Los Angeles approved a $1.6 billion, 25-year pact Tuesday to purchase solar power from a company that will build nearly 1 million photovoltaic panels on tribal land.

“I just can’t believe that we’re actually going to have something like this on the reservation,” Moapa Band of Paiutes Chairman William Anderson said after arriving at McCarran International Airport on a flight from Los Angeles, a few hours after the council made its unanimous decision to purchase power from K Road Moapa Solar.

“We are going to have a solar farm and jobs for our people,” Anderson, 39, said about the 320 members of the Moapa band.

They will serve as landlords and provide sand and gravel for the project, the largest solar plant on tribal lands in the United States.

Expected to go online in 2016, the 250-megawatt solar farm will generate enough electricity for 118,000 homes more than 280 miles away in Los Angeles.

Anderson said the farm consisting of some 910,000 solar panels will be built on 2,000 acres on the 71,680-acre reservation. It will be across from the tribe’s Moapa Travel Plaza truck stop, west of the Valley of Fire exit off Interstate 15, about 35 miles northeast of Las Vegas. It will be southwest of NV Energy’s coal-fired Reid Gardner power station, which the tribe blames for health problems.

In a statement Tuesday, U.S. Sen. Harry Reid, D-Nev., said, “Unlike the old, dirty technologies used at the nearby Reid Gardner coal plant, this new solar project will not emit any hazardous emissions, wastes, or carbon pollution.”

Reid said the public-private-tribal partnership “is a powerful example” of how clean energy can boost Nevada’s economy, by creating 400 jobs during construction and up to 20 permanent jobs for continued operations.

“In building out K Road’s solar capabilities in Nevada, hundreds of clean energy jobs will be created,” Reid said. “By beginning the process of working toward energy independence, the Moapa Band of Paiutes will have a unique opportunity to strengthen their local economy.”

Plans call for a transmission line to deliver some solar power to the tribe’s truck stop. In addition, members of the Moapa Band of Paiutes will be employed to shuttle workers to the project site and provide environmental monitoring to ensure habitat for federally protected desert tortoises is maintained.

The Los Angeles Department of Water and Power will have the option to purchase the solar energy farm at various stages starting in 2026 for $339 million and $398 million.

Based in New York City, it has offices in San Francisco and Shanghai. K Road is partnered with Barclays Natural Resource Investments, a division of Barclays Capital, the investment banking unit of Barclays Bank PLC.

Chevalier said the Moapa Band of Paiutes has a second solar project in its sights with Res Americas and is aiming for a third, a wind energy project that tribal members plan to develop.

“This is opening the way for them to engage in renewable energy to create more benefits and grow their knowledge in the energy industry,” she said.

Anderson said the 150-megawatt Res Americas solar project will consist of photovoltaic panels that convert sunlight directly into electricity and a separate system that uses mirrors or reflectors to concentrate sunlight on a tower containing a fluid that heats up and creates thermal energy that can be converted to electricity.

That project will be built on 1,000 acres of tribal land.

In his statement, Reid thanked Los Angeles Mayor Antonio Villaraigosa and Interior Secretary Ken Salazar for backing the K Road project, which for the most part helps California meet its renewable energy goals.

“Nevada has become a clean energy leader, and I will continue to work so Nevada’s communities have opportunities to harness their immense clean energy potential,” Reid said.

“We have a true opportunity to transform Nevada’s economy into the vibrant core of Western and national clean energy market opportunity unlike anywhere in the world,” Reid’s statement said.

Under California’s renewable energy law, the Department of Water and Power must generate 25 percent of its power from solar, wind and other renewable energy sources by 2016, and 33 percent by 2020.

The Department of Water and Power currently relies on renewable energy sources for more than 17 percent of its power.