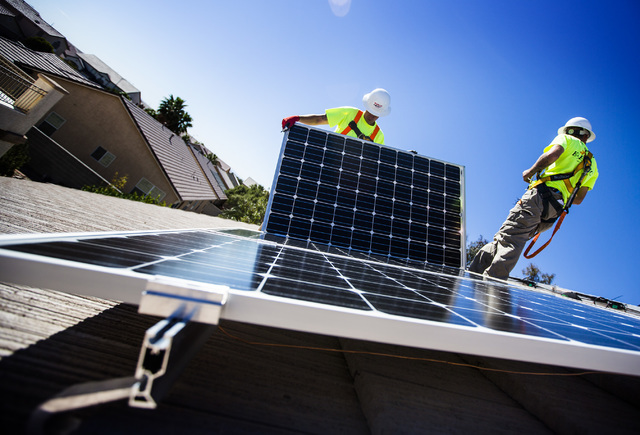 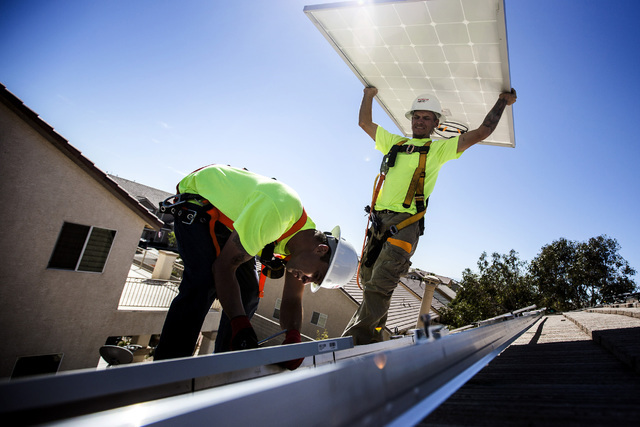 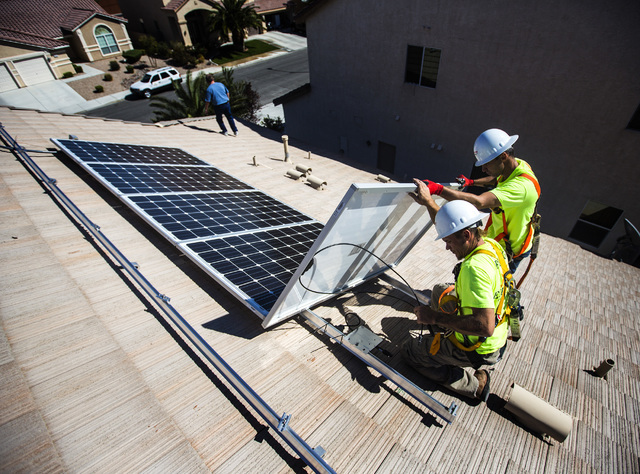 Jacy Sparkman, left, and Matt Neifeld with Robco Electric installs solar panels at a home in northwest Las Vegas on Friday March 13, 2015. The company estimated that the 17 panel 4.675 KWDC solar project will save this homeowner about 80 percent a month in their energy bill. (Jeff Scheid/Las Vegas Review-Journal)

CARSON CITY — Nevada was first in the nation last year in the total amount of solar electricity generated per capita at 421 watts per person, a new study released Thursday shows.

Nevada improved from third place in 2014, but could fall in the 2016 rankings as a result of a new net metering rate structure adopted by Nevada energy regulators in late 2015. The new rate class for rooftop solar customers has brought the industry to a standstill in Nevada and has been characterized as the “Silver State’s solar schizophrenia.”

“The more solar grows, the more big utilities try to stop it,” said Bret Fanshaw, solar program coordinator at Environment America and a co-author of the report. “Even in the face of strong public support for pollution-free energy, major utilities are working across the country to damage the policies that have helped states become solar leaders.”

Environment America is a group of advocacy organizations that researches and advocates for environmental policies.

The report released by the Environment America Research & Policy Center and the Frontier Group is based on all solar generation, including large solar projects. NV Energy, the public utility monopoly operating in Nevada, has purchased power agreements for a number of large solar projects to help meet the state’s energy demands that are included in the per capita total.

In 2015, more than $800 million was invested in solar energy installations in Nevada.

About 9 percent of the solar generation in Nevada is from rooftops. Nationally the rooftop figure is 31 percent.

Following Nevada, the states with the highest per capita electricity capacity are Hawaii at 394 watts, California with 338 watts, Arizona with 337 watts and North Carolina with 208 watts.

Nevada was also first among states in the amount of solar electric capacity installed in 2015 per capita at 144 watts per person.

“A growing number of states are leading America’s ongoing solar boom,” the report says. “Those states are not necessarily the ones with the most sunshine, but rather the ones that have opened the door for solar energy through the adoption of strong public policies.”

A rooftop solar coalition is attempting to restore Nevada’s more generous net metering policies through a referendum on the upcoming November general election ballot. The measure must still survive a legal challenge in front of the Nevada Supreme Court before voters could weigh in on the issue.

Commenting on the report during a phone-in press conference, Chandler Sherman, deputy campaign manager for the Bring Back Solar Alliance, said the new rate for rooftop solar approved by Nevada energy regulators, “has been disastrous for Nevada. This has shut down the rooftop solar industry and force thousands of Nevadans out of work.”

Among the highlights in the report:

The major conclusion in the report is that every state should adopt aggressive targets for the development of solar energy consistent with achieving a rapid transition to 100 percent renewable energy.