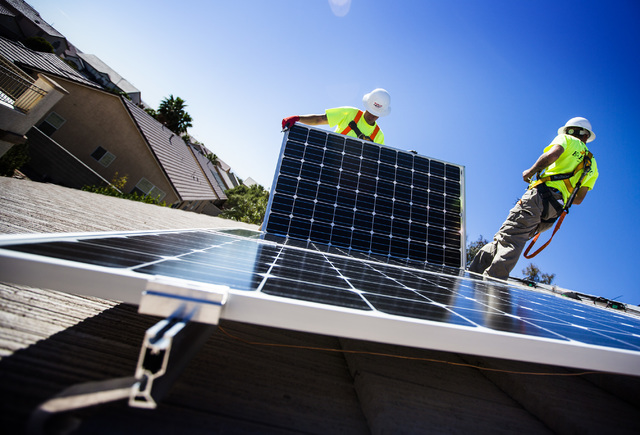 But a silver lining in the report from The Solar Foundation shows the state lost only about 400 solar jobs overall. Nevada gained jobs in other areas, primarily in larger solar project development, to offset the rooftop solar losses.

This is against a backdrop of 24 percent growth nationwide that pushed American solar employment over 260,000 jobs last year, according to the 2016 National Solar Jobs Census.

“With a near tripling of solar jobs since 2010, the solar industry is an American success story that has created hundreds of thousands of well-paying jobs,” said Andrea Luecke, president and executive director of The Solar Foundation.

But Luecke said the net metering policy decision in Nevada is catching up with the industry this year. Only two states are expecting to see declines in solar growth this year, and Nevada leads the way with a drop of 22.3 percent.

The Nevada Public Utilities Commission changed the net metering rate for rooftop solar customers effective Jan. 1, 2016. The decision came following direction from the 2015 Legislature to examine whether a separate rate class of customers was needed to resolve any questions of any subsidy to rooftop solar from nonsolar customers.

A subsidy was identified and the new net metering rates were approved to address it. Existing rooftop solar customers were later grandfathered in under the original, more favorable rates.

The result saw large national rooftop solar companies leave the state since the benefits of the systems were no longer adequate to make the financial investment worthwhile.

Green energy policies, including net metering, are likely to emerge as issues at the 2017 legislative session. Nearly a dozen energy-related bills have been requested so far.

The National Solar Jobs Census 2016 is The Solar Foundation’s seventh annual report on the solar workforce nationwide and by state.