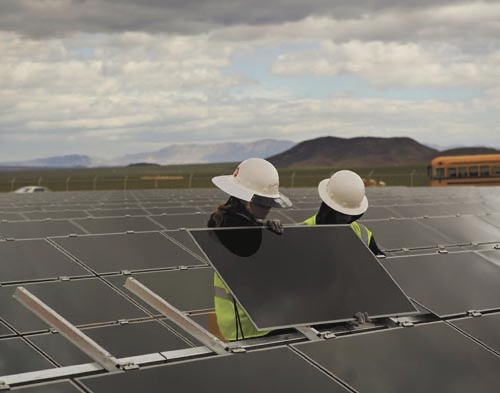 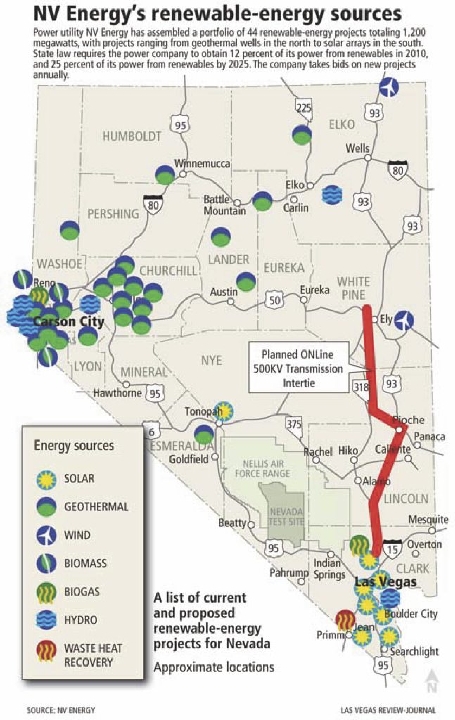 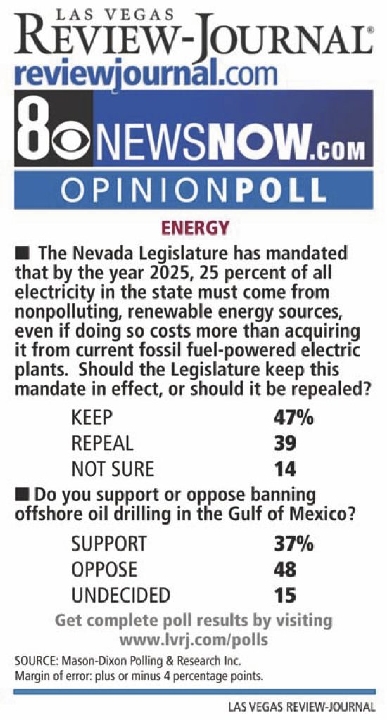 Sure, Nevada’s practically all desert, but in one area, the Silver State claims some of the greenest pastures on Earth.

But just how much potential the state offers will depend on a multitude of issues, including technological hurdles, financial obstacles and even political will. Some experts say renewables could completely displace fossil fuels such as coal and natural gas in Nevada’s energy economy, while others assert the green-power movement is destined to peter out as the costs and inconveniences of such generation unfold.

Here’s what is not up for debate: Nevada owns one of the country’s biggest renewable bases. Unlike most states, Nevada offers major access to sunlight, hot springs and wind — three key sources of green power.

Roughly half the state houses enough underground hot springs to produce at least 80 milliwatts of geothermal power per square meter, and about 25 percent of Nevada has enough wind to host utility-scale wind farms.

So rich is Nevada’s renewable-power base that John White, executive director of the Center for Energy Efficiency and Renewable Technologies in Sacramento, Calif., said it’s conceivable the state eventually could derive all of its power from alternative sources, and send leftovers to surrounding states.

“Nevada is abundantly blessed with renewable-energy resources,” White said. “There’s no question Nevada has the potential to be completely reliant on renewable energy for its power needs, and to be a net exporter.”

Nevada law requires power utility NV Energy to get 25 percent of its electricity from renewable sources by 2025, up from 12 percent in 2010.

So, the state is already positioned for considerable growth beyond NV Energy’s existing renewable portfolio of 1,200 megawatts, or 44 projects completed, planned or under construction. And that’s not to mention the dozens of renewable projects in the state that are planned but contracted to sell power to the utility. The utility’s 2009 conference for groups interested in offering renewable power to the company drew 240 attendees, so there’s no shortage of interest in the state’s green-power prospects.

“It’s clear the renewable potential in Nevada far exceeds the demand for it under the portfolio standard,” Hicks said. “There is significant potential to export renewable generation outside the state.”

“It’s certainly conceivable that we could fuel our entire (car) fleet from cellulosic sources and get all of our electricity from renewable energy, but the cost would be staggering, in consumer prices, in government support and in other conveniences, such as more variable supplies of power,” said Jerry Taylor, a senior fellow with the Cato Institute, a libertarian think tank in Washington, D.C.

For an idea of how tough it will be to replace existing capacity, Taylor said, consider the difficulty states have experienced meeting renewable-power mandates. Nevada’s standard, which the Legislature passed in 2001, went unmet until NV Energy achieved the requirement for the first time in 2008. The utility missed the mark again in 2009. Company executives have blamed timing issues on the shortfall. And three big utilities in California will fall about two percentage points short of their 20 percent mandate by year’s end.

But many of those portfolio deficits come from temporary travails, experts said. Get past those troubles, renewable advocates say, and green energy could really take off.

Consider financing. Before the real estate bust of two years ago, finding funding for construction of renewable plants was easier, Hicks said. Today, renewable developers have the same problems obtaining loans as any other sector is seeing, and that has made projects harder to finance. As the economy recovers, loans should pick up again, Hicks said.

And then there are transmission lines. Or rather, there aren’t transmission lines. Many renewables originate in remote areas far from existing grids, so the power the projects generate is stranded, unable to make its way into power companies’ portfolios. Taylor said that’s the case in Texas, for example, where some wind turbines yield power that goes nowhere, simply because the farms don’t link to transmission networks.

Planned transmission solutions here include NV Energy’s One Nevada line (ONLine), a 235-mile connection that will link the utility to renewable generation in rural Nevada. ONLine is scheduled for completion by early 2013.

White said it would be relatively easy to beef up existing transmission corridors connecting Nevada to California, Arizona and other Western states so that regional players could develop and share resources ranging from hydroelectricity to wind to biomass.

The demand for water could be a big impediment in parched, arid Nevada, though developers more recently have proposed solar plants that cool exhaust steam with air rather than water. As for washing panels, plants can use brackish or reclaimed water, White said.

Other technological obstacles could prove more enduring. The sun will always set, and the wind will always stop. That means a constant need for fossil fuel-generated backup power, Taylor noted, and the power-grid whiplash resulting from a sudden cloudburst over a solar plant could cause brownouts or blackouts as the quick change in power sources shocks the system.

The intermittent nature of renewables is especially an issue with wind farms. Wind typically blows most intensely during midwinter nights, rendering it useless during peak-power periods on hot summer days, Taylor said.

Also likely to stick around are permitting issues. Renewable plants must obtain federal or state approval in a licensing process that can take years. Complying with the National Environmental Policy Act can create uncertainties for projects, as the environmental impact review could either turn up few problems or uncover development killers such as the presence of an en­dangered species, Hicks said.

Uncertainties also surround federal subsidies that make today’s renewable power economically viable. Many tax credits, grants and loan guarantees are set to expire in the next three years or so, which would leave renewable projects without the funding that makes them economically competitive with conventional energy sources. But White said improving technologies will reduce the costs of renewable power, and that should enable green projects to get built with less funding in the long run.

The great unknown is whether the political will exists to stick with energy forms that can cost two to four times as much as conventional sources. A Mason-Dixon poll conducted for the Review-Journal doesn’t show major voter sentiment in either direction, with 47 percent of Nevada voters saying they would like to keep Nevada’s renewable portfolio standard and 39 percent saying the Legislature should repeal the mandate. Another 14 percent were undecided. The margin of error is 4 percentage points.

“As long as voters reward politicians for keeping these programs in place, then renewable-energy preferences, such as subsidies and mandates, will continue regardless of how renewables perform,” Taylor said.

Still, Taylor said federal research shows renewables have a long way to go before they replace fossil fuels in the nation’s energy makeup, so they are unlikely to dominate any individual state’s energy profile. If all existing subsidies continue in perpetuity, renewable energy would rise to just 12.4 percent of electricity production by 2035, the Energy Information Administration projected.

“There’s a tremendous amount of overstatement regarding what will happen in the future given current policy trends,” Taylor said. “You need truly Herculean changes in the law to see anything close to what politicians talk about. Consumers would have to pay higher prices and be more vulnerable to dislocations on the grid.”

But don’t confuse the nation’s renewable outlook with Nevada’s, White responded. Follow serious conservation efforts with a “sustained and orderly build-out” of renewable capacity, and Nevada could get all of its electricity from green power by 2050, he said.

“There are challenges to renewable energy, but there are no show-stoppers.”