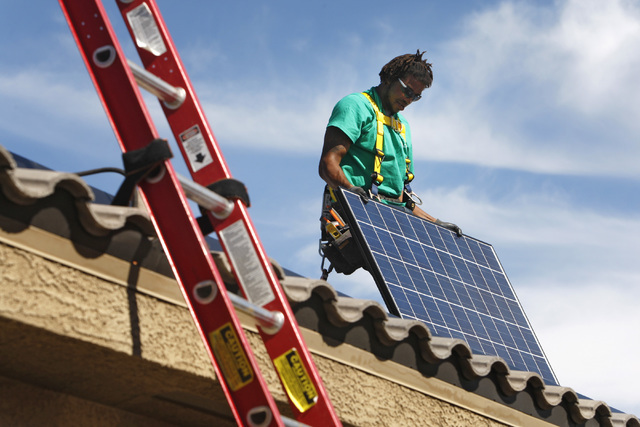 CARSON CITY — A new study on the cost of rooftop solar has found that there is a cost-shift of about $36 million a year to nonsolar ratepayers, based on the approximately 30,000 customers signed up for net metering in Nevada.

The new study by Energy and Environmental Economics Inc., known as E3, has been posted to the website of the Nevada Public Utilities Commission.

The updated study, comparing data to a 2014 report from the same company, also found that there would be a cost of grandfathering existing net metering customers under the old rate structure of $15 million a year.

“Overall, for the state of Nevada, NEM generation is a costlier approach for encouraging renewable generation than utility-scale renewables,” the report says.

This is mainly due to utility-scale solar prices having dropped sharply in recent years, while rooftop solar costs have not declined in a similar fashion, the report said.

The report notes that as of June of this year, the approximately 30,000 rooftop solar customers produced over 265 megawatts of electricity, representing 3 percent of NV Energy’s peak demand.

The new E3 report is not likely to help the rooftop solar industry in its quest to restore net metering rates to the more favorable structure in place prior to this year. The PUC adopted a new rate structure starting Jan. 1 after determining there was a $16 million a year subsidy from nonsolar customers to net metering customers.

The new rates have ended rooftop solar development in Nevada for the most part.

But the report could still under go changes and revisions. Stakeholders will now have the opportunity to vet the data in the report.

Chandler Sherman, deputy campaign manager for Bring Back Solar, said in a statement: “We look forward to working with other stakeholders to review this draft study, and provide input on the data and analysis through a transparent peer-review process.

“The public deserves a rigorous and fair accounting of the costs and benefits of solar, and we will work with the PUC and other leadership to ensure the final study meets the high standards the public expects,” she said.

A proposal to grandfather in existing rooftop solar customers is now before the PUC. It is supported by NV Energy, Gov. Brian Sandoval and others. A bill that would accomplish the same result has been drafted for consideration by lawmakers next year as well.

The new analysis was requested by a panel of state lawmakers to help guide the Nevada Legislature on how to address the rooftop solar controversy in the 2017 session.

The analysis appears to conflict with two new studies released in May that found net metering benefited all utility ratepayers. One of the reports was performed by the Brookings Institution and the other by rooftop solar company SolarCity and the Natural Resources Defense Council.

The 2014 report from E3 found that there was no subsidy paid to rooftop solar customers from nonsolar customers going forward. But those findings were challenged based on the significant changes in the costs associated with large-scale solar projects, where a megawatt of electricity now costs $40 or less compared to more than $100 just a few years ago.

The new study was requested by Assemblyman Stephen Silberkraus and Sen. James Settelmeyer, who serve as the chairman and vice chair of the Legislative Committee on Energy.

“We recommend E3 use data updated and provided by the utilities to the PUCN so that the results are comparable to those in the prior study,” the lawmakers said in a letter to the commission.

“An updated, independent study prepared by E3 will provide a foundation as we continue the discussion of ensuring that all customers benefiting from the electric grid are paying appropriately …” the letter said.