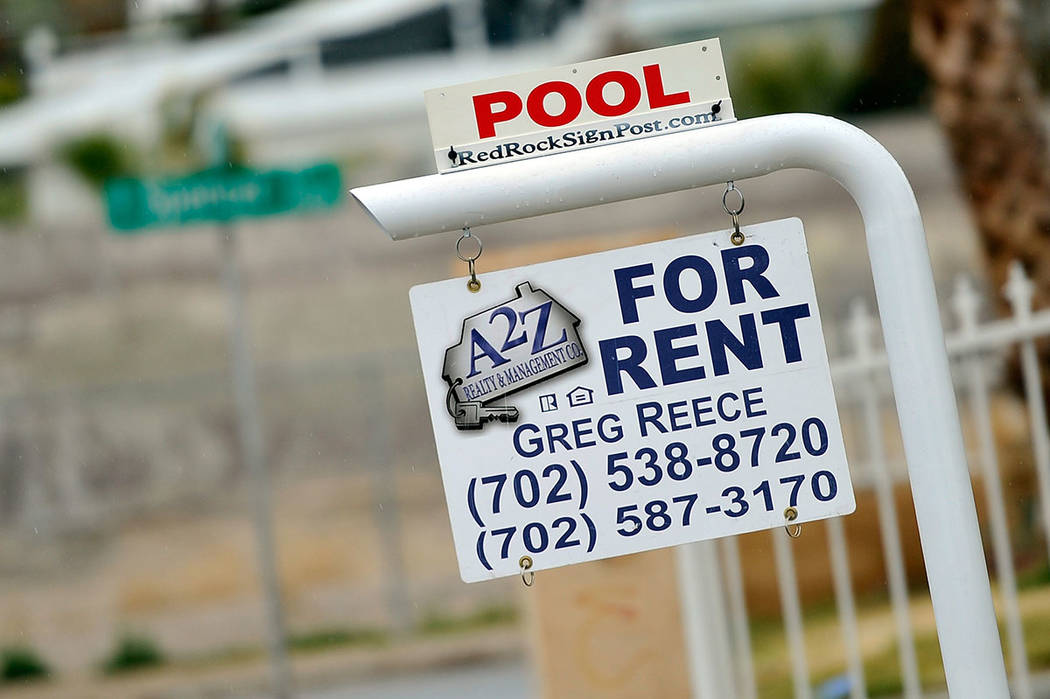 A "for rent" sign is displayed in front of a downtown home Tuesday, Jan. 19, 2016, in Las Vegas. David Becker/Las Vegas Review-Journal

It was a rare lucrative business for Wall Street in the aftermath of the financial crisis: snapping up properties in foreclosure and renting them out. So good, in fact, that now, as the distressed pool dries up, some investors are refusing to let the rental-model fizzle. They’re building more and more of the houses themselves.

American Homes 4 Rent, a five-year-old real estate investment trust and the biggest of the publicly traded landlords by number of homes, is buying lots and houses around the U.S. Colony Starwood Homes plans to purchase at least 600 just-erected properties over the next year from more than a dozen builders.

Privately held AHV Communities is plotting whole neighborhoods for those who want — without the bother of ownership — single-family residences with some apartment-complex bells and whistles, such as fitness centers and bocce-ball courts. Residents don’t even have to mow their lawns.

The bet behind the build-to-rent boom is that there are enough people who dream of the detached-house life but can’t afford to buy into it. With tight mortgage standards and rising prices, and millennials putting off marriage and loaded up with student debt, that might not be a long shot.

As it is, the homeownership rate in the U.S. has been hovering for a while near a 51-year low, according to U.S. Census data, though that could be changing: The number of owner-occupied homes rose faster than the number of renting households for the first time since 2006 in the first three months of the year.

Who can save for down payment?

But the REITs probably aren’t taking too much of a gamble considering many Americans’ feeble efforts to stash money away, said Bruce McNeilage, co-founder of Nashville, Tennessee-based Kinloch Partners, an investment firm that has experience buying brand-new rental homes and selling them to companies including Progress Residential and Main Street Renewal.

“People have good intentions, but they’ve never been able to save for a down payment,” McNeilage said. Many tenants ask for short leases, saying they plan to buy, but they rarely do, he said. About one third of the 42 Nashville homes Kinloch sold to American Homes 4 Rent in 2014 were leased by people who had been on month-to-month arrangements for about seven years.

For the landlord companies, it typically costs more, of course, to purchase a freshly constructed property than it does to acquire and refurbish an already lived-in model. But they’re getting discounts from builders. They also have to put less into maintenance and repairs, especially early on.

And a new single-family rental can command higher rent, 5 percent to 8 percent more than an older, renovated one, according to Alex Sifakis, president of based JWB Real Estate Capital, which has built about 450 rental homes in Jacksonville, Florida, since 2011.

American Homes 4 Rent, started by Public Storage founder B. Wayne Hughes, expects the new homes it’s having constructed will bring higher yields than the existing properties it buys, executives said on a call with analysts.

At this point, Invitation Homes, the Blackstone Group LP-backed rental-home REIT with about 48,000 houses and the largest of the companies by market capitalization, is sticking with the original business model, even though foreclosures are at their lowest level since 2005. While Invitation occasionally purchases new homes to fill gaps, it’s still focused on finding repossessions. It has kept its supply stable for two years, selling what doesn’t fit its strategy.

What the other REITs are doing is not only generating business for the building industry but getting them out of jams.

“Some builders get a little bit of fatigue at the end of trying to close out an existing community, and they have maybe 10, 15, 20 remaining homes,” Colony Starwood Chief Financial Officer Arik Prawer said on a February conference call. By the same token, “some builders love to just get some momentum going in a new community, and like for us to buy a strip of homes upfront just to get it going.”

Colony executives said this month that they have three communities in the works, where every home is a newly built rental, and eight more planned. The company is No. 2 in total returns among the largest single-family landlords this year through Friday.

Even Lennar Corp., the second-largest U.S. homebuilder, is in on the game. It created its own rental-only community in Sparks, Nevada, a Reno suburb, starting with about 80 homes in 2015. Now there are 225, with all but two occupied as of last month, according to the local leasing office.

“It can be a challenge to build entry-level homes at a price level that is affordable for ownership,” said Drew Flahive, president of Amherst Holdings’s single-family residential division, which has purchased new homes to lease and manages 12,000 properties. “Converting single-family properties to rentals often makes the most sense to maximize real estate value while providing affordable housing.”