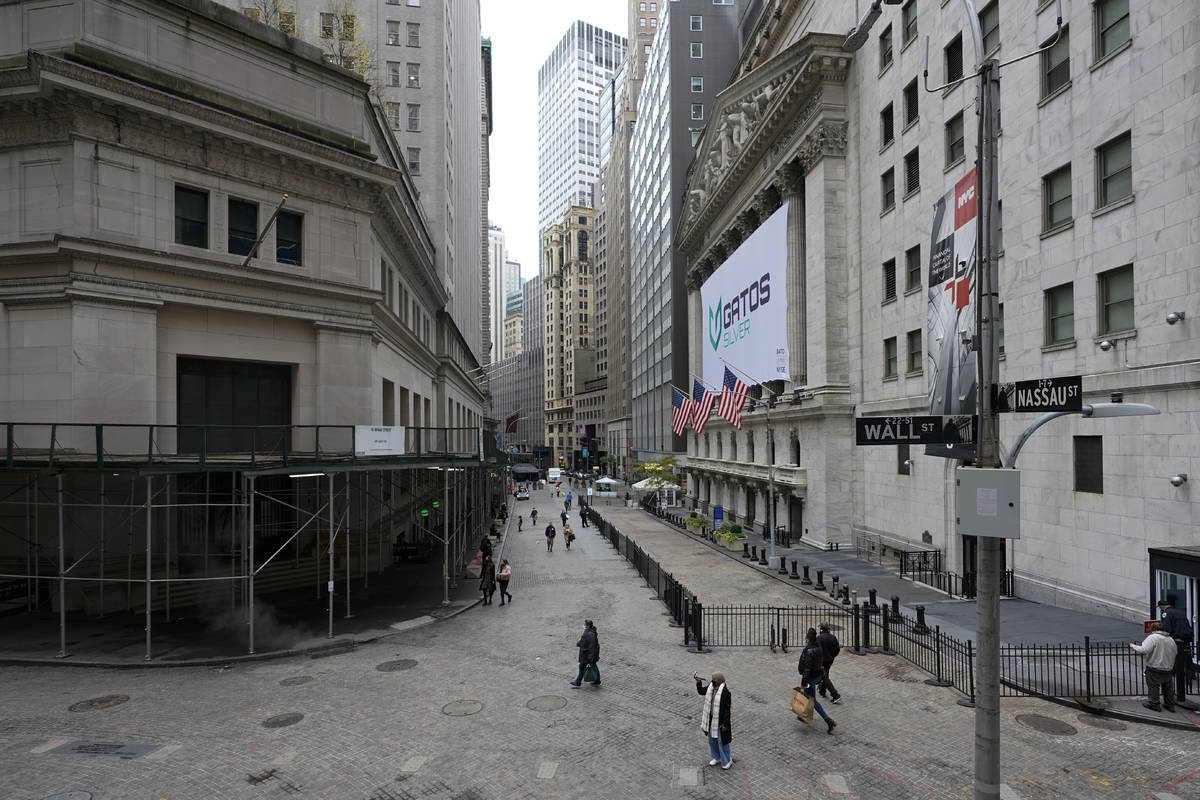 U.S. stocks are shaking off an early slide and moving broadly higher Thursday as the market steadies after its worst drop in more than four months.

The S&P 500 was 1.9% higher in afternoon trading, bouncing back from a drop of 0.3% in the early going. Traders welcomed encouraging data on the pace of layoffs and how powerfully the economy rebounded during the summer from its coronavirus-induced coma. Economists warn big challenges still lie ahead, though, and the S&P 500 is coming off a 3.5% tumble Wednesday on worries the worsening pandemic will drag down the economy and corporate profits again.

Across the Atlantic, European stocks initially rose but leveled off after the head of the European Central Bank said there’s “little doubt” it will deliver more stimulus in December. They were also recovering from a sharp slide on Wednesday, when France and Germany announced new restrictions on businesses in hopes of slowing the accelerating spread of the virus.

Despite the relatively calm moves, caution continues to hang over the market. A measure of investors’ fear in the U.S. stock market touched its highest level since June before receding Thursday, and oil prices continued their sharp descent on worries about demand from a virus-weakened economy.

Beyond Europe, coronavirus cases are also on the rise in the United States, raising worries about restrictions on businesses returning. Even if the sweeping lockdowns that suffocated the economy earlier this year don’t come back, the fear is that the worsening pandemic could nevertheless keep customers away from businesses and undercut their profits.

The economy had been making strides in the summer, and it grew at a record annual rate of 33.1% from July through September, according to a government estimate released Thursday. That followed up on its crash from April through June, when it shrank at an annualized rate of 31.4%.

More recently, the number of U.S. workers applying for unemployment benefits eased last week to 751,000. While that’s still incredibly high compared with before COVID-19, it’s not as bad as the 791,000 from the prior week. It was also better than economists had forecast.

But the budding recovery is under threat now with coronavirus cases surging and with Congress and the White House unable to deliver additional support for the economy. Economists and investors have been asking for such assistance since the summer, when the last round of supplemental benefits for laid-off workers and other stimulus approved by Congress earlier this year expired.

Hopes are fading that Washington can get anything done soon, and House Speaker Nancy Pelosi sent a letter to Treasury Secretary Steven Mnuchin on Thursday listing all the topics she’s waiting to hear back on in their negotiations. They include benefits for laid-off workers and measures on coronavirus testing.

Several of the biggest U.S. companies are scheduled to report how much profit they made during the summer after trading closes on Thursday. Because of their massive market value, the movements of stocks for Apple, Amazon, Facebook and Google’s parent company have a much greater impact on the S&P 500 and other indexes than other stocks. All of them were up between 2.8% and 5.5% ahead of their earnings reports.

Expectations are high for Big Tech companies, which have been largely cruising through the pandemic. Investors have bid up their stock prices on the belief that their profits will continue to soar as work-from-home and other trends accelerated by the pandemic hold.

But another tech giant, Microsoft, saw the potential downside of such huge expectations on Wednesday. That’s when its stock slumped 5% even though it reported stronger profit and revenue for the latest quarter than Wall Street expected.

Across Wall Street, analysts have noted that stocks have not been getting as big a boost as they usually do after reporting stronger profits than forecast.

That’s dampened the enthusiasm following what’s been a better reporting season than Wall Street had feared. Earnings per share for S&P 500 companies are on track to be down about 13% from a year earlier. That’s a much milder drop than the nearly 21% decline that Wall Street was forecasting at the start of October, according to FactSet.

In European stock markets, Germany’s DAX returned 0.3%. France’s CAC 40 and The FTSE 100 in London were unchanged.

In Asia, Japan’s Nikkei 225 dipped 0.4% after its central bank held steady on its monetary policy while downgrading its outlook due to COVID-19 outbreaks. South Korea’s Kospi fell 0.8%, Hong Kong’s Hang Seng lost 0.5% and stocks in Shanghai inched up by 0.1%.