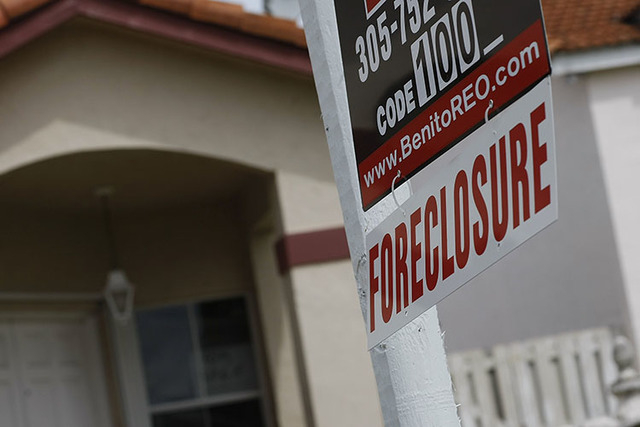 A foreclosure sign hangs in front of a home. (Joe Raedle/Getty Images/Thinkstock)

Nevada continued to chip away at its home foreclosures in April.

A Wednesday report from California research firm RealtyTrac found that foreclosure activity across the state was up 39 percent year over year in the month, extending to one in every 555 homes. That was good enough for No. 2 in the nation for default-related activity.

Florida ranked No. 1, with one in every 425 homes in some stage of foreclosure. Maryland, New Jersey and Tennessee rounded out the top five.

There were 893 foreclosure starts statewide in April, up 64.5 percent year over year. Completions jumped 19.1 percent, to 548.

Foreclosure starts were down 5.2 percent year to year, while completions spiked 50.3 percent.

Nevada saw a big jump in foreclosure auctions in particular, which were down 5 percent nationwide year over year. Among the 21 states with rising auctions, the Silver State experienced the third-largest gain, at 31 percent.

Foreclosure activity in Nevada has fluctuated with changing state laws that govern the default process. The most recent change, the Homeowners Bill of Rights, took effect in October 2013.

Las Vegas also landed among RealtyTrac’s top 10 for bank-owned homes selling closest to their market value. Repossessions commanded an average of 96 percent of their value at time of sale, for the sixth-best share in the nation. San Diego was No. 1, at 100 percent. Denver was No. 10, at 93 percent.