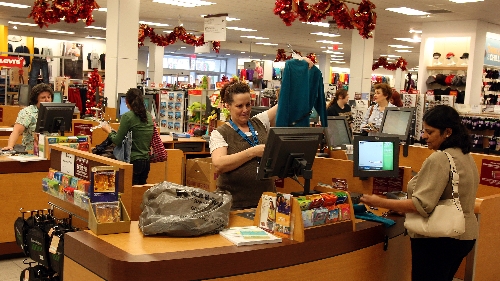 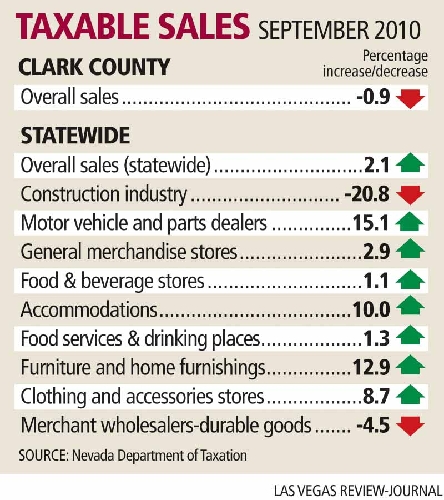 Nevada’s merchants improved their overall taxable sales for the third straight month in September, this time without help from the back-taxes training wheels that propped up sales figures through July and August.

Taxable sales in the Silver State increased 2.1 percent year over year in September, to $3.24 billion, the state Department of Taxation reported Tuesday.

Sales in Clark County slid, though, dropping 0.9 percent, to $2.32 billion, in the same period.

To understand the sales discrepancy between Clark County and the rest of the state, consider disparities in how separate sectors performed in September.

As for construction, once the second-biggest sector of Southern Nevada’s economy, it’s still in free fall, slumping 20.8 percent year over year in September. That means Clark County is still reeling from the effects of the building bust that followed the pre-recession housing bubble.

"The majority of other portions of the state did not historically experience similar levels of construction, and the latest reporting period’s Southern Nevada figures reflect the impact of the downturn," said Brian Gordon, a principal in the local research and consulting firm of Applied Analysis.

You can see a similar dynamic in Lyon County, a bedroom community outside Reno that leaned heavily on new-home construction before the downturn. Even Clark County’s September slump had nothing on the downturn in Lyon County, where taxable sales dropped 9.6 percent.

"These numbers are a little bit of a disappointment. I would say they’re an indication that our retail sector is not out of the woods yet," said Steve Brown, director of the Center for Business and Economic Research at the University of Nevada, Las Vegas.

Still, the state’s overall numbers trended upward despite the Aug. 31 end of the state’s amnesty program, designed to encourage businesses to hand over back taxes.

In all, 11 of the state’s 17 counties saw sales gains. Improvements were especially notable in mining-heavy regions, jumping 77.9 percent in White Pine County and 186.6 percent in Esmeralda County. Even next door, in Nye County, taxable sales spiked 79.7 percent, driven by a $23 million improvement in nonmetallic mineral production. That was a 4,365.1 percent increase in mineral-production sales, and it accounted for almost all of Nye County’s $27 million sales increase.

It’s all a far cry from the depths of the recession in 2009, when state and local taxable sales plummeted as much as 20 percent year over year in some months.

"We’re starting to see some stabilization in overall consumer spending," Gordon said. "While we’re well below the peak levels of two to three years ago, the latest data suggest we may be seeing the bottom of the cycle. Consumers held off on purchases during the downturn, and recession fatigue may be setting in. Consumers are coming back."

Visitor volumes on the Strip have improved in almost every month in 2010, and that is likely factoring into steadier numbers, Gordon said. The Taxation Department doesn’t tabulate local and tourist spending separately, so it’s hard to determine how much of a difference rising visitation has made.

Brown added that the boost in purchases of big-ticket items such as cars hints at an uptick in consumer confidence.

"Either that, or people’s cars are about to fall apart," he said.

Neither Gordon nor Brown said Nevada will return to peak taxable sales anytime soon. Sales hit their $4.7 billion high in December 2006, and though direct comparisons are tough because of seasonal factors, September’s numbers were roughly 25 percent off that record.

Climbing that sales apex won’t be easy because much of the boom-era spending resulted from rising home values. Consumers felt rich enough for regular shopping sprees, and they cashed out home equity to finance splurges on vacations, cars and other pricey indulgences. The spending just wasn’t consistent with income levels, Gordon said.

Added Brown: "Everybody thought they had Paris Hilton’s budget."

Such profligate habits are a thing of the past. The probability of the state’s returning to $4.7 billion in monthly sales in the near term is minimal, Gordon said.

Revenue from taxable sales helps pay for prisons and schools, among other public services.

Through the first three months of fiscal 2011, the general-fund portion was $13.8 million, or 7.6 percent, above forecasts from the Economic Forum, an advisory group that projects revenue for state budgeting purposes.