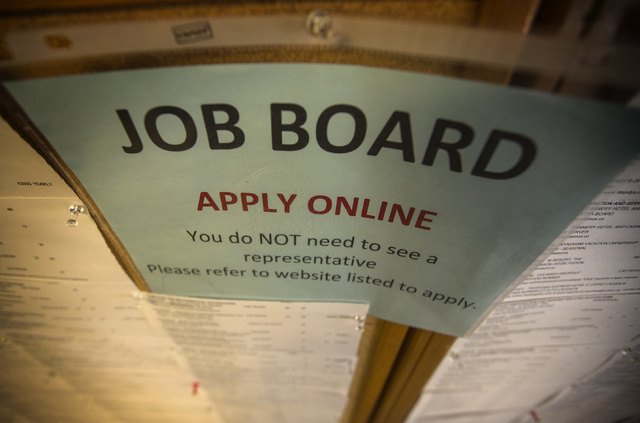 CARSON CITY — Nevada’s unemployment rate ticked up in May to a seasonally adjusted 6.1 percent when payrolls dropped by 3,800 from April, marking the largest monthly jobs decline since September 2010, the Department of Employment Training and Rehabilitation reported Wednesday.

“We are experiencing dynamic population growth once again and I am hopeful that our robust economic development efforts coupled with existing business expansion will help reduce unemployment moving forward,” Sandoval said in a statement.

Bill Anderson, chief economist of the state agency, said despite the increase from the April rate of 5.8 percent, Nevada’s jobless rate for May was still 0.8 of a percentage point better than May 2015 and represented the 63rd consecutive month the unemployment rate declined on a year-over-year basis. Over the last year, Nevada has added 25,100 jobs.

“Job trends nationally were also weak in May,” Anderson said. “All things considered, we suggest that not too much be read into this month’s decline in jobs in Nevada.

“Weakness was concentrated in a single industry, administrative services, and underlying trends remain encouraging,” he said. “With that said, we will be paying close attention in the months ahead for any further signs of softening.”

Nevada’s jobless rate is 1.4 percentage points higher than the national rate of 4.7 percent.

The drop in the national rate was attributed to a decline in the labor force. Nevada’s labor force, on the other hand, held steady in May, Anderson said.

For the first five months of the year, construction trades added 6,100 jobs, a 9.2 percent increase over the same period last year. Trade, transportation and utilities saw job expansion of 9,000.

Leisure and hospitality, a key employment sector in Nevada, gained 1,400 jobs in May.

Anderson said one positive trend is the number of Nevadans working full time. Before the economic downturn, the number of full-time workers topped out at nearly 1.1 million, representing about 83 percent of total employment. Part-time jobs numbered 225,000.

During the Great Recession, Nevada’s full-time employment dropped to 830,000. Since hitting bottom, it has risen by 170,000 jobs and accounts for 76.5 percent of total employment, the report said.