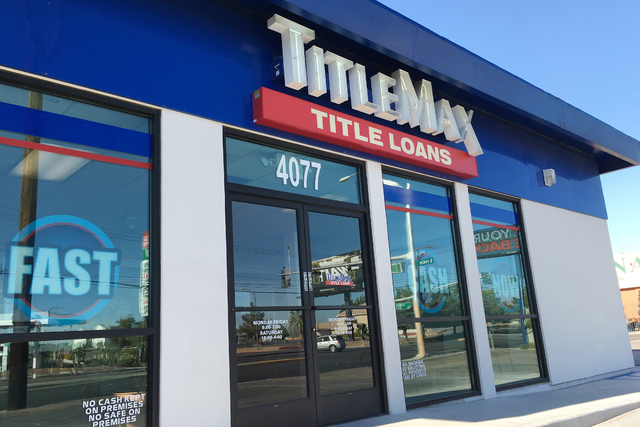 TitleMax, with more than 40 stores in Nevada, mostly in Las Vegas, has been ordered to void one year's worth of auto title contracts with a grace period payment deferment. The ruling was issued on Aug. 12, 2016. Adelaide Chen/Las Vegas Review-Journal

TitleMax has appealed a judge’s decision to void and refund an estimated 6,140 title loans to customers in Nevada.

The filing on Thursday does not include new information, only a petition for judicial review in the 8th district court. State law requires TitleMax to produce a more detailed document within 40 days of the written notice.

From the time state examiners from the Financial Institutions Division visited 42 TitleMax locations statewide twice in 2014 and 2015, the agency ordered TitleMax to stop offering a grace period payment deferment amendment that would, through extending the number of payments from seven to 14, charge customers more interest.

TitleMax ceased offering the product in “good faith” last December. However, Judge Denise McKay ordered the title loan contracts that customers entered into the grace period deferment after Dec. 18, 2014, to be voided, and the customers involved to receive full refunds. In addition, the fine was set at $307,000, but most of the amount was suspended so that TitleMax is only required to pay $50,000.

While the administrative law judge’s decision was made through administrative proceedings, TitleMax is entitled to appeal in district court, according to state law.

Both TitleMax and the FID declined comment. However, local TitleMax clerks had told customers that they would receive a refund within 120 days from the company’s legal department provided that the loan was paid off.

Alan Clark of Las Vegas believes his title loan is one of those ordered to be voided. He took out $5,000 on a 2004 Subaru Impreza last December, mainly to catch up on mortgage payments. The first seven payments were interest on the principal, about $551 a month, which amounted to $3,857. The second seven payments totaled $5,000.

“The interest is ridiculous,” said Clark, who within the last month traded in the car and paid off the rest of the loan. He said the service can come in handy but, “I think title loans are horrible and I’ll never do one again.”