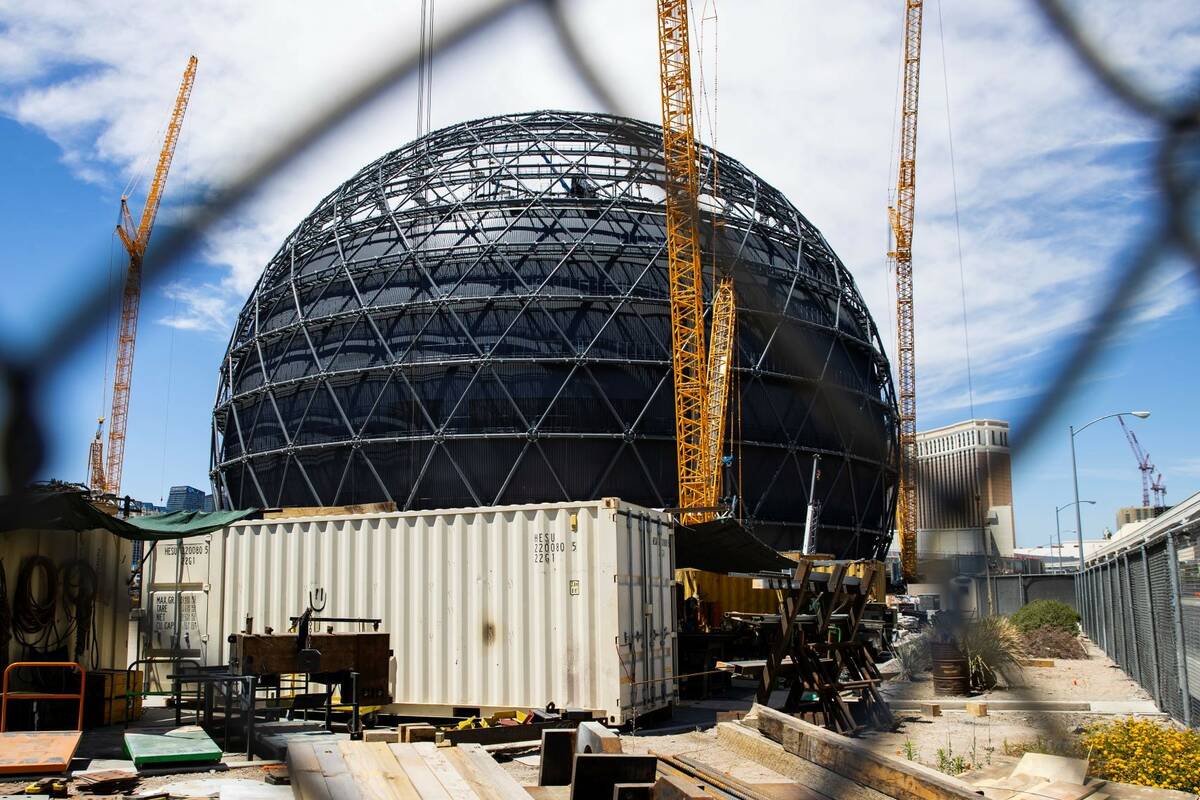 Construction at the MSG Sphere at the Venetian is underway on Monday, May 16, 2022, in Las Vegas. (Bizuayehu Tesfaye/Las Vegas Review-Journal) @btesfaye

Construction crews will top off the steel frame exosphere of the 366-foot-tall MSG Sphere at The Venetian later this month.

In a recent earnings call for Madison Square Garden Entertainment Corp., Executive Vice President and Chief Financial Officer David Byrnes also said the company is negotiating a partnership with the organizers of the first of three Las Vegas Grand Prix Formula One auto races planned in Las Vegas in November 2023.

Las Vegas Convention and Visitors Authority President and CEO Steve Hill las week said he expects the Las Vegas Grand Prix Formula One race to become an annual event for the city after races in 2023, 2024 and 2025.

The MSG Sphere, an entertainment venue located just east of the Venetian Expo convention center, is expected to be open in late 2023.

“MSG Sphere’s prime position along the circuit (race course) presents a high-profile opportunity for both our company and F1,” Byrnes told investors. “We will be able to showcase the venue to a global audience of entertainment and sports fans both in-person and watching broadcasts of the event around the world.”

The 3.8-mile course includes portions of Koval Lane where the circuit will divert east and circle the Sphere before moving to Sands Avenue.

“And this integrated partnership will give F1 significant access to the venue and our grounds for thousands of race fans as well as takeovers of our exterior LED display for race-related content activations and advertising,” he said. “There are also potential hospitality opportunities beyond MSG Sphere to include Tao Group.”

Tao Hospitality, owned by MSGE, acquired the Hakkasan Group for an undisclosed price in April 2021.

Byrnes said additional details of the partnership would be disclosed “as we go forward.”

The topping off later this month will mark a significant milestone for the $1.9 billion project.

This spherical steel structure encompasses the venue and ultimately will be covered with about 580,000 square feet of fully programmable LED panels, forming the largest LED screen on Earth. Byrnes said it would be an impactful display for partners to showcase their brands, create unique activations and promote content.

“As we make our way toward the opening of the venue, we’ve been energized by the interest we’re seeing from potential partners,” Byrnes said. “This includes discussions with leading filmmakers about the creation of original immersive attractions with global artists for concert residencies at the venue, with promoters of marquee events and with potential corporate partners, who see substantial value in the platform’s capabilities inside and out.”

The 17,500-seat venue will have a high-resolution display plane, which is larger than three football fields, the world’s largest beam-forming audio system with more than 160,000 speakers and it will deliver superior sound to every seat in the house.

“Think of it as headset-quality sound without the headset, no matter where you’re sitting in the house and other 4D technologies, which will complete the immersive experience,” he said. “We’re currently having discussions with potential partners, including leading filmmakers and global artists, to create content that will be specifically designed for the MSG Sphere. And this does include original attractions — which we’ll be able to run multiple times a day year-round — and the attractions will really drive the high utilization of the venue as well as concert residencies, which will help build out our recurring base of events.”

To create and produce Sphere content, MSGE is developing a studio in Burbank, California, to be known as MSG Sphere Studios.

“This is for our creative production and engineering teams, as well as artists and partners to develop, optimize and preview these unique content experiences that are being developed for Sphere,” Byrnes said. “An important added benefit of the studio is it will enable us to keep higher utilization at the Las Vegas venue, as we’ll be able to fully test content without having to pause the attractions that are running in Las Vegas.”