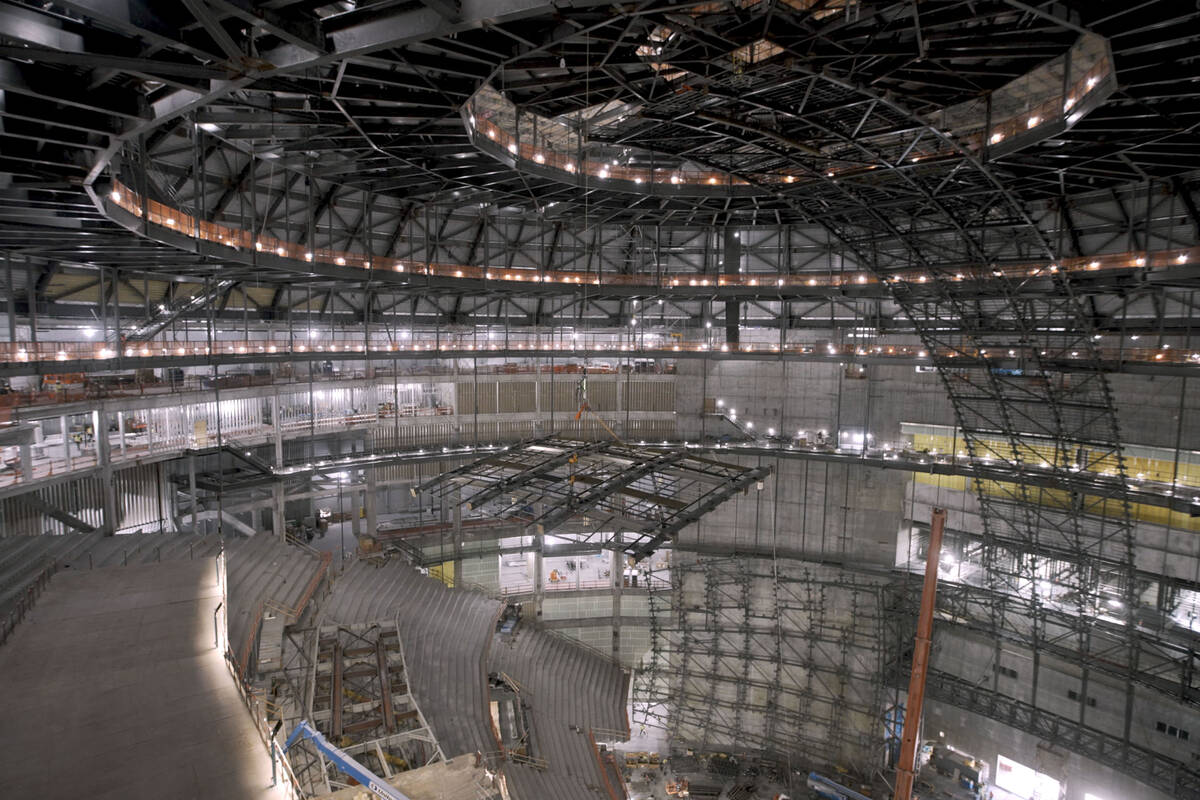 Crews working on MSG Sphere have installed what the team calls the ‘mohawk’ – the central section of the steel that will support the immersive entertainment venue’s interior display, which will be the highest resolution LED screen in the world. (MSG Sphere) 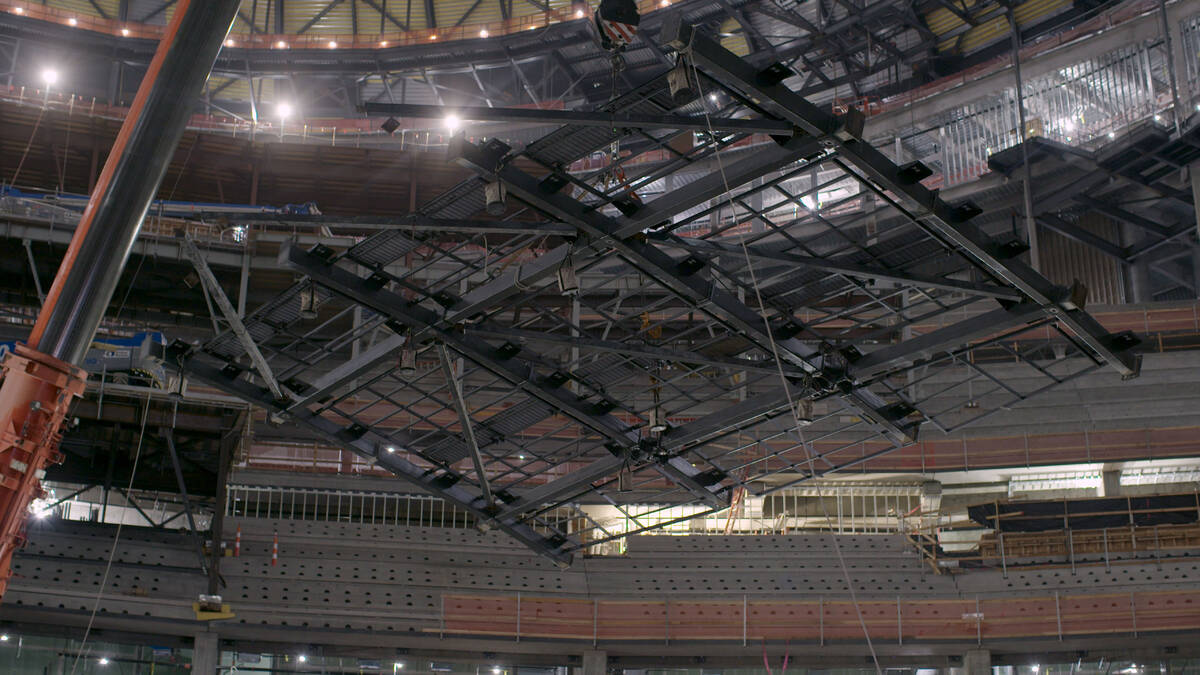 A section of the steel framework that will form the outline of MSG Sphereճ nearly four acre interior LED display plane is lifted into place. Once complete the entire steel framework will weigh approximately 730 tons. (MSG Sphere) 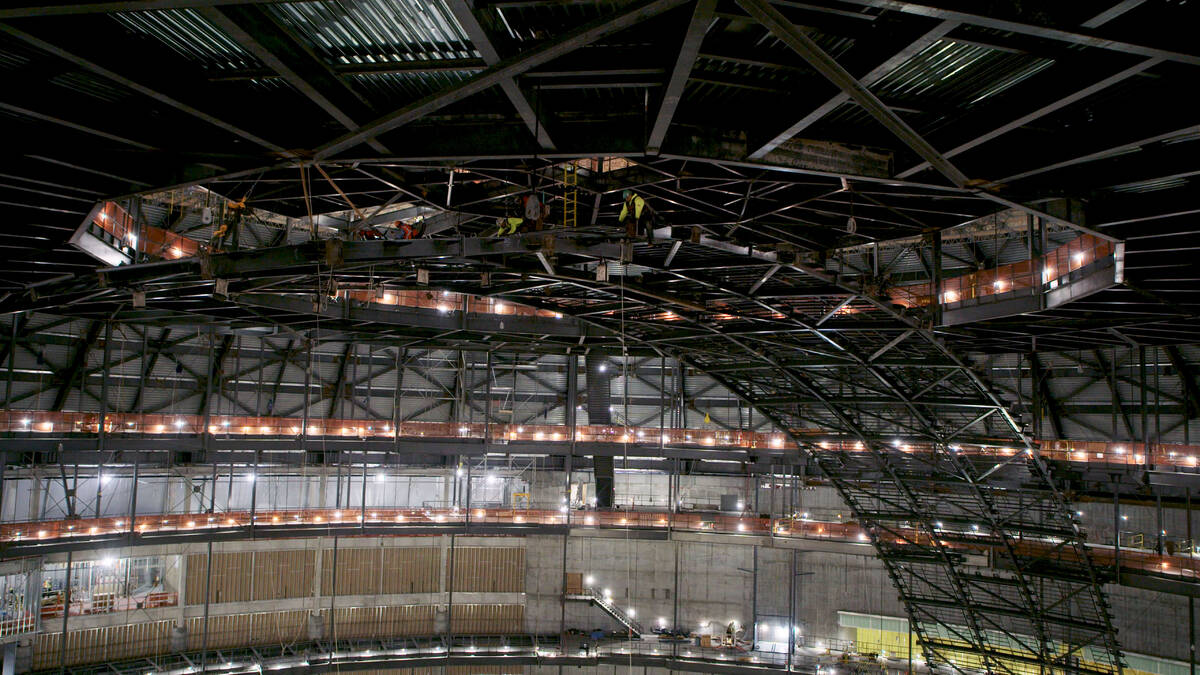 The highest sections of the immersive steel framework arch up to 240-feet above the venue floor, where they are partially supported by catwalks that connect to the underside of the domed roof, which is how the LED display will be able to wrap up, over and behind audiences to create a completely immersive visual environment. (MSG Sphere) 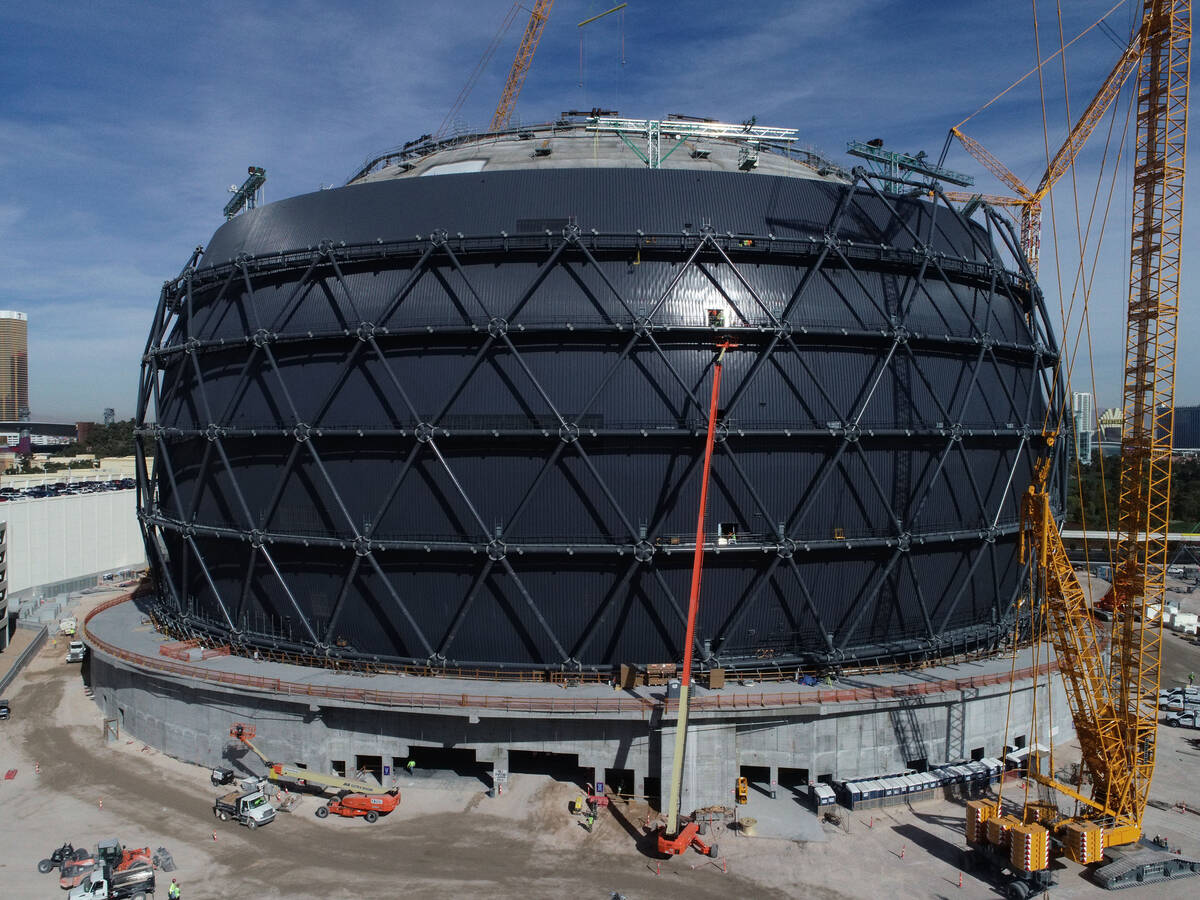 Work continues to progress on MSG Sphere’s exosphere, where crews have built the widest section at 516 feet in diameter. The exosphere will ultimately stand at 366 feet tall and be covered in approximately 580,000 square feet of fully programmable LED lighting. (MSG Sphere)

A massive mohawk is growing within the MSG Sphere at The Venetian.

The “mohawk” — the nickname attached to the arched metal support structure for the nearly 4-acre, high-resolution LED screen being built inside the $1.9 billion, 17,500-seat entertainment venue — is the newest addition to the MSG Entertainment Corp. project.

The start of work on the new portion was first announced by MSG executives during their second-quarter earnings call earlier this month. The project is on target for completion in the latter half of 2023.

“With this central steel section in place, you can start to see how the massive scale and curved shape of the interior LED screen will surround the stage and audience to create a completely immersive visual environment,” said Nick Tomasino, vice president of construction for MSG Entertainment.

“Building the immersive steel framework is one of the most complex elements of the entire project, and this is a tremendous achievement by the skilled tradespeople working on site,” he said.

MSG’s partnership with Las Vegas Sands Corp. is about to change. The $6.4 billion sale of The Venetian, Palazzo and The Venetian Expo to Apollo Global Management Inc., a New York-based private investment company, and Vici Properties Inc., a real estate investment trust affiliated with Caesars Entertainment, is on the verge of closing.

Under the deal, Apollo would replace Las Vegas Sands in the partnership with Madison Square Garden Entertainment for development of the MSG Sphere.

David Sambur, co-head of private equity for Apollo, told Nevada gaming regulators this month that the Sphere would be an important component in Apollo’s entertainment portfolio once it takes over operations and the Sphere project is completed.

The Sphere, located just east of The Venetian Expo, is envisioned as a first-of-its-kind immersive entertainment venue that can be used for live performances, special video productions and product demonstrations for companies meeting in conventions and trade shows at The Venetian Expo.

The mohawk is the central section of the steel that will support what is billed as the highest-resolution LED screen in the world.

Construction crews call it that because of how it arches in a strip from behind the center of the stage up 240 feet above the venue floor and reaches behind the seating area. The highest sections are partially supported by catwalks that connect to the underside of the domed roof, which is how the LED display will eventually wrap up, over and behind the audience to create a completely immersive visual environment.

Once the entire steel framework is completed later this year, it will weigh about 730 tons and support the 160,000-square-foot LED screen as well as the 170,000-speaker, multilayered audio system.

Designed by the Berlin, Germany-based Holoplot, the system can direct sound beams directly within the venue.

Big screens also are being built on the exterior of the Sphere. Significant progress has been made on MSG Sphere’s exosphere, which will surround the venue to create what will be the largest LED screen in the world.

Crews have built the widest part of the exosphere — 516 feet in diameter — and are now placing the upper sections where the Sphere begins to close toward its pinnacle. Once complete, the exosphere will stand at 366 feet tall, more than 80 feet higher than the top of the main venue today.

It ultimately will be covered with some 580,000 square feet of fully programmable lighting to create a dynamic exterior display with limitless creative possibilities.

Illustrations showing the completed exosphere have portrayed the globe-shaped building as an image of planet Earth and as the moon.