Nevada will hit the gas on innovation this week as it becomes the first state to host a driverless vehicle that beams mobile, high-definition television to passengers.

The demonstration will be a key highlight of the annual National Association of Broadcasters Show, which kicked off Saturday in Las Vegas. The NAB Show, as it is known, gives a peak into the technological, social, demographic and regulatory forces shaping the future of the TV, radio and other media industries.

More than 1,700 exhibitors — including more than 200 companies presenting for the first time — will fill the show campus. Eight areas are dedicated to different categories of exhibitors, including post-production, display systems and online video.

The convention, which is closed to the public, was the city’s fourth-largest expo last year, attracting 103,000 industry specialists.

NAB generates more than $200 million in economic impact for the city as hotel rooms, restaurants and bars fill up.

NAB will host several new pavilions this year, including ones dedicated to podcasting, esports and startups. Podcasting and esports are experiencing phenomenal growth and impacting the broader industry.

The audience for esports is forecast to rise to 215 million this year up from 160 million in 2016, according to Newzoo, a market research firm.

Social media’s impact on the broadcast industry following a tumultuous year involving investigations into fake news and stolen data will likely be a major topic of discussion at sessions throughout the week.

The conference has changed significantly over the years as boundaries have blurred between media, entertainment and technology — what the association has dubbed as the M.E.T. effect.

The show has widened its audience beyond the traditional radio and TV broadcasting sector as more individuals are consuming news, video and entertainment through social media platforms likes Facebook, Twitter, Amazon’s Twitch and Google’s YouTube.

Amazon and Google now have significant presences on the show floor alongside traditional broadcast industry giants like Sony and Canon.

Underscoring social media’s growing influence at the show, YouTube Chief Product Officer Neal Mohan will deliver a keynote speech Monday on the next era of television.

A $13 million renovation project is set to begin this month at McCarran International Airport.

Nevada’s unemployment rate last month was below its peak during the Great Recession but remains high.

The Tropicana is ready to reopen its doors for the first time since the COVID-19 pandemic reached Nevada.

Springs Preserve to reopen to public
By Marvin Clemons / RJ

Springs Preserve, closed to the public since March 16 because of the coronavirus pandemic, will reopen Oct. 1.

Nevada is among six states that were removed from New York’s COVID-19 travel advisory list. 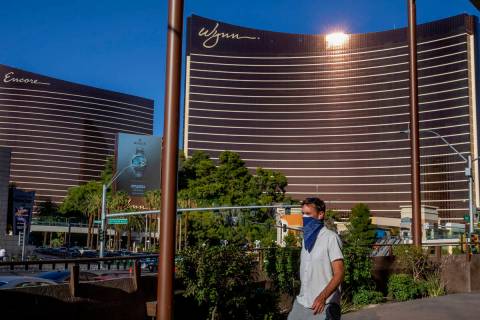 Lawyers for a Las Vegas Strip property filed a trespassing lawsuit Friday against 20 unknown people in the wake of a Labor Day weekend fight that broke out at Encore.