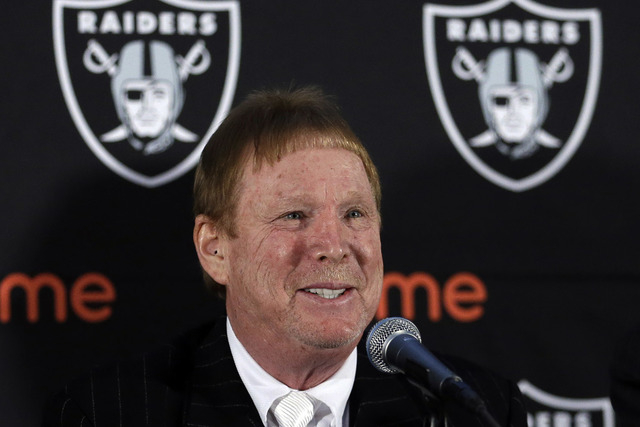 The Southern Nevada Tourism Infrastructure Committee meets April 28 at UNLV to review tourism-related projects for possible state funding. A 65,000-seat stadium in the Strip resort corridor is among the projects under consideration for recommendation to the Nevada Legislature.

Davis will be at the meeting to address the stadium plan and the Raiders’ potential move, a sourceconfirmed Tuesday on condition of anonymity.

The infrastructure committee’s recommendations, due this summer, are not binding.

Las Vegas Sands Corp. has proposed building a $1.3 billion domed stadium near the Strip through a public-private partnership. The casino operator’s preliminary financing proposal called for about two-thirds of the funding to come from taxes on tourists.

Davis has visited Las Vegas at least twice in the past two months, once to tour a potential site at Tropicana Avenue and Koval Lane owned by UNLV, and once to examine Sam Boyd Stadium as a potential site for Raiders games until the new stadium is complete.

Sands and Majestic Realty have partnered on a proposal to develop a domed stadium that could be used by the UNLV football team and an NFL team. The developers have said the project will be viable with or without an NFL franchise because the Strip lacks a large venue for major concerts and sporting events.

The Raiders are in the middle of a relocation scramble involving the Rams and the San Diego Chargers. The Rams received NFL permission to move from St. Louis to Los Angeles. The Chargers will play the 2016 season at San Diego’s Qualcomm Stadium while they seek a deal for a new stadium in San Diego. If the Chargers don’t get a new stadium, they could join the Rams in Los Angeles.

The NFL this year denied the Raiders’ request to move to Los Angeles. The Raiders have a one-year lease at O.co Coliseum in Oakland through the 2016 season. An NFL team must have the approval of 24 of the league’s 32 owners to move.

After Davis toured Sam Boyd Stadium this month, sources told the Review-Journal the team would consider playing preseason games and perhaps one regular-season game per year at the stadium until the new domed stadium was finished.

The committee also is considering a planned expansion of the Las Vegas Convention Center as well as a series of street, highway, airport and transit projects.