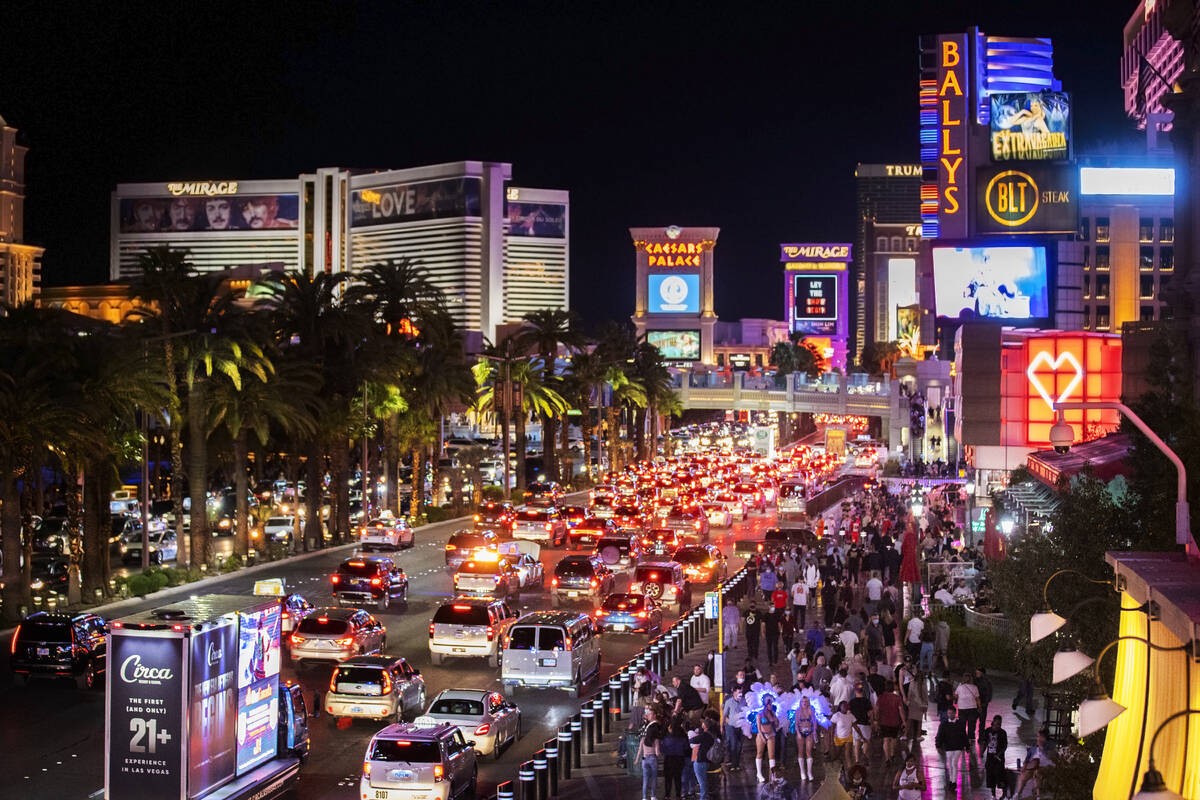 Southern Nevada tourism leaders are keeping a close watch on rapidly rising gasoline prices and industry analysts are split on how the sudden spike nearing $5 a gallon will affect resorts.

“It’s premature to know if rising gas prices will impact travel,” said Lori Kraft, senior vice president of communications for the Las Vegas Convention and Visitors Authority. “We will continue to monitor the situation.”

Virginia Valentine, the president and CEO of the Nevada Resorts Association said she concurs but noted that even if consumers curtail travel spending, Las Vegas is still in prime position as a value proposition.

“We are not seeing an immediate impact,” Valentine said. “After two long years of the pandemic, visitors are eager to take a trip to Las Vegas to escape and recharge. Many have saved up for their vacations, and as they make choices on where to focus their spending, Las Vegas continues to provide the best value for their entertainment and vacation dollar.”

Analysts, meanwhile, are split on how much the cost of fuel will affect travel to Southern Nevada.

While some see potential visitors to Las Vegas making travel decisions based on looking more closely at how much a trip will cost them, others say short-term plans to visit for special events to view and wager on — like the NCAA “March Madness” basketball tournament — won’t be affected.

Some also expect resorts to cut room rates or offer special promotions such as gasoline gift cards to guests to incentivize a Las Vegas trip.

“Unless as a country we are able to secure a cheaper source of gas that is less controversial than oil and gas from Russia, such as reopening domestic pipelines and drilling operations, I foresee a drastic halt to domestic travel as consumers are feeling constraints with inflation,” said Amanda Belarmino, an assistant professor at UNLV’s William F. Harrah College of Hospitality.

Still, she noted, “I do think that casinos could shift to providing gas incentives, such as vouchers and gift cards, that would be able to successfully shift travel towards us rather than other destinations, but these prices will probably have an impact on all domestic travel.”

Historically, resorts have managed downturns in travel when gas prices increased by making the deal sweeter once customers get here. But that may not be the case this time.

Brendan Bussmann, director of government affairs for Las Vegas-based Global Market Advisors, said the spike in fuel prices comes at a time when many resorts are still struggling to maintain higher average daily room rates so they may be reluctant to cut their rates.

“As we have seen in the past, there will likely be some that provide promotions within their player programs to try and offset some of these costs,” Bussmann said. “However, (average daily rates are) still in a recovery mode so it is not something that operators are going to give on price based off of costs.”

He also noted that the higher cost to get to Las Vegas may bite into the money reserved for higher spending at the gambling tables.

“Based on current geopolitical dynamics, I think the current spikes in gas prices will become the norm, at least in the short term, that will continue to cause further strain on consumer wallets in addition to the existing constraints caused by inflation and supply-chain issues,” he said. “At some point, this is going to cut into the gamer’s dollar that does not have long-term elasticity.”

“I’ve seen just in the last 10 days almost a 20 percent increase in fuel costs and that was before (Monday’s) spike in oil,” he said. “While not the highest we have seen over the last couple of decades, the trajectory is not good and probably will go higher. The industry continues to be the best at adapting to current headwinds and there is no doubt we will continue to persevere.”

Several resort companies contacted Monday haven’t shared yet whether they plan to cut room rates or offer incentives to out-of-town travelers to come to Las Vegas.

Josh Swissman, founding partner of the Las Vegas-based Strategy Organization, expects resorts to be full this and next week because visitors have already made plans and bought tickets purchased for numerous college basketball tournaments all over town this week. And the first four days of the “March Madness” tournament is always a big special event draw.

“What that means is that you’ll see a little less in terms of drive-in traffic over the next couple of weeks or at least some people will be more vocal about paying more for gas,” he said. “To counter that, March Madness will be kicking off so there’s going to be plenty of people. Come hell or high water, they’re going to want to come to Vegas and enjoy all that Vegas has to offer for the first weekend of the tournament.”

Swissman said he suspects that over the long term, the price spikes “won’t be a big deal” that would show up on notes in future earnings calls.

Belarmino and Bussmann expect the spike in gasoline prices might also foreshadow higher airfares in the future, and that could have a long-term effect on Las Vegas.

“Not only will this mean pain at the pump, but it will drive up fuel prices and increase the price of domestic air travel,” Belarmino said. “Finally, the added price of gas for daily activities will decrease the amount of money consumers have to spend on leisure activities. This is an unnecessary blow to an already hard-hit segment of our economy, and hopefully it will be temporary.”

said it’s too soon to estimate the specific impact on flights to and from Las Vegas.

”What’s happening in Ukraine is a tragedy that’s bigger than any single industry, but hopefully the crisis there can stabilize soon and the markets can settle in a manner that gives everyone greater comfort, whether that’s for personal or business-related decisions surrounding air travel.”