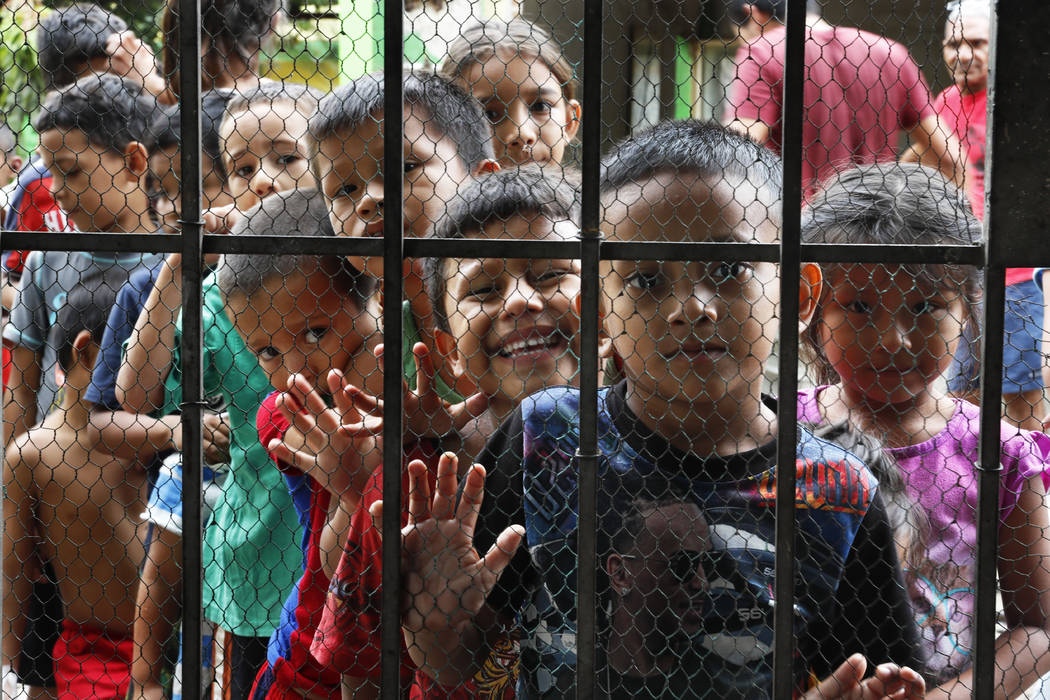 Migrant children line up for a meal at the door of the Jesus del Buen Pastor del Pobre y el Migrante shelter, in Tapachula, Chiapas state, Mexico, Thursday, May 30, 2019. Resentment has been growing in parts of central Mexico as the flow of migrants has continued. Towns were receptive and welcoming to the first caravans last year, but more recently have felt overwhelmed. (AP Photo/Marco Ugarte) 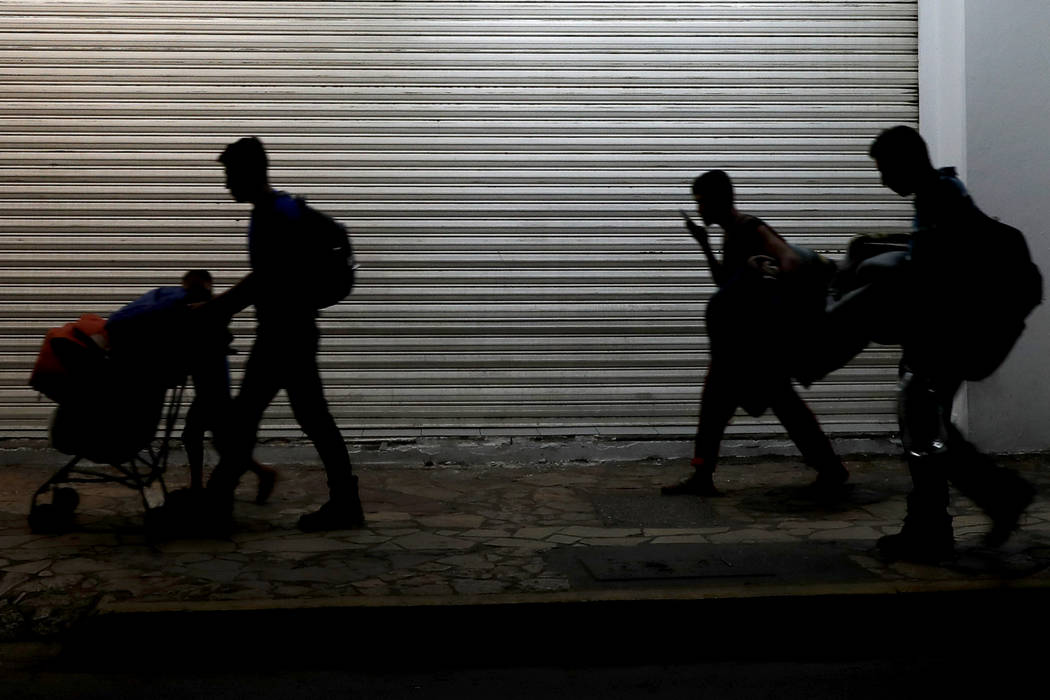 Migrant families camped in a park leave in the middle of the night as they are pushed out by Mexican immigration authorities, in Tapachula, Mexico, early Wednesday, May 29, 2019. Authorities cleared the park of camping Central American migrants and the makeshift encampment of Haitians and African migrants outside the immigration detention center near the Guatemala border. (AP Photo/Marco Ugarte) 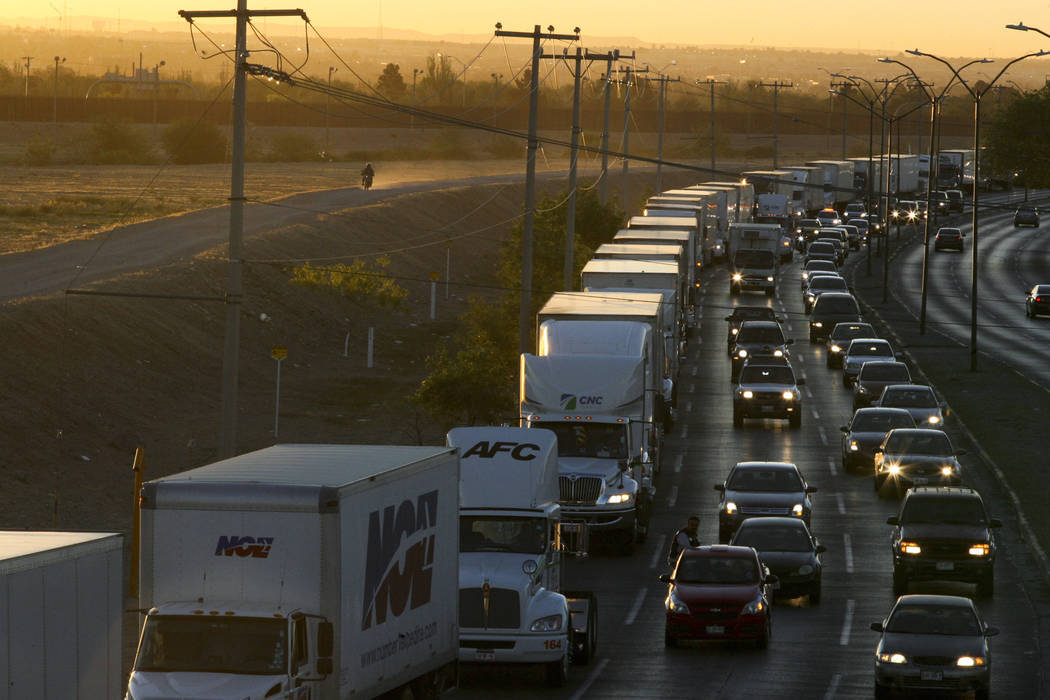 Trucks wait to cross the border April 9, 2019, with the U.S. in Ciudad Juarez, Mexico. In a surprise announcement that could compromise a major trade deal, President Donald Trump announced Thursday that he is slapping a 5% tariff on all Mexican imports to pressure the country to do more to crack down on the surge of Central American migrants trying to cross the U.S. border. (AP Photo/Christian Torres, File) 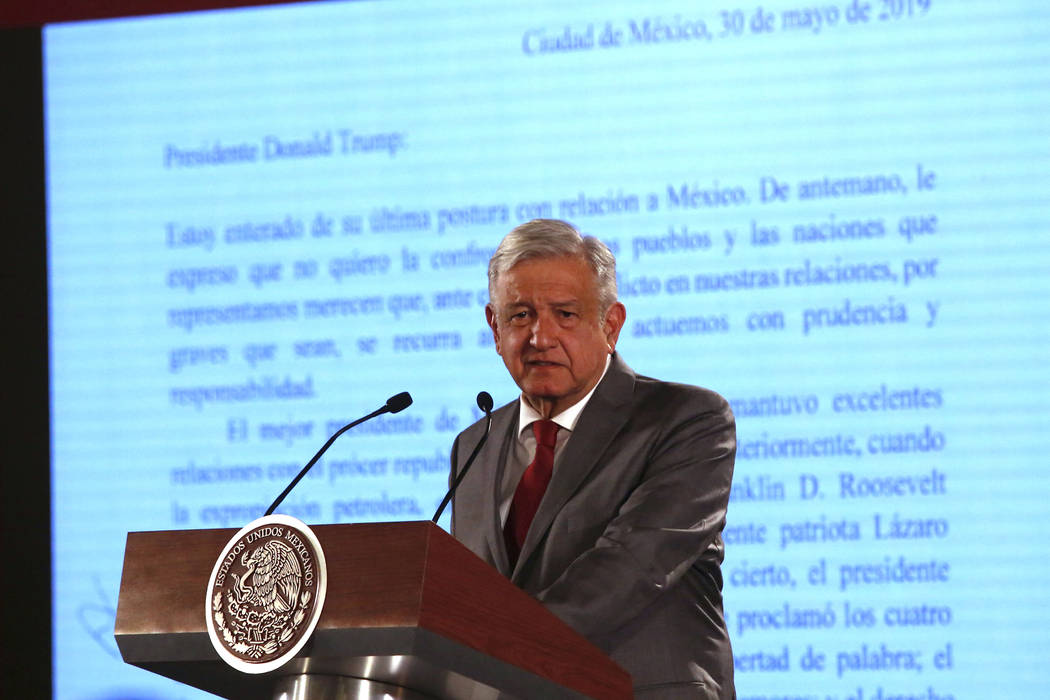 Mexico's President Andrés Manuel López Obrador says Mexico will not respond to U.S. President Donald Trump's threat of coercive tariffs with desperation, but instead push for dialogue, during a press conference at the National Palace, in Mexico City, Friday, May 31, 2019. (AP Photo/Ginnette Riquelme) 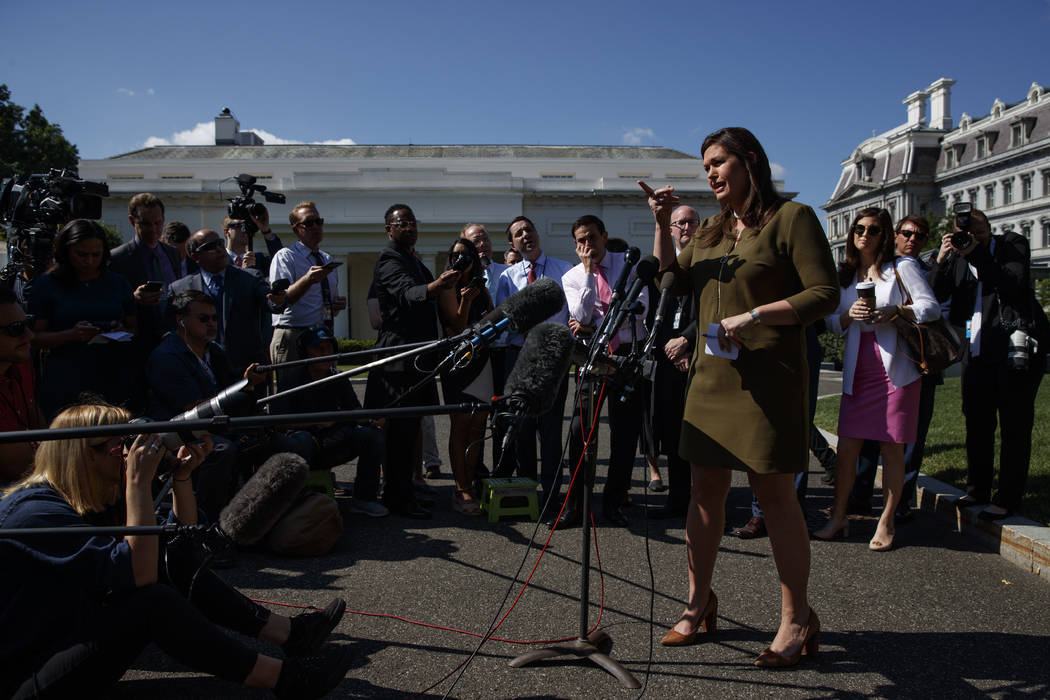 WASHINGTON — Despite pushback from U.S. business and Mexico, President Donald Trump doubled down Friday on his threat to slap a 5% tariff on Mexican imports unless America’s southern neighbor cracks down on Central American migrants trying to cross the U.S. border.

U.S. manufacturers said the tariff, set to take effect June 10, would have devastating consequences on them and American consumers. U.S. stocks tumbled on Wall Street in response to Trump’s planned action.

“Imposing tariffs on goods from Mexico is exactly the wrong move,” said Neil Bradley, executive vice president of the U.S. Chamber of Commerce, which is exploring legal action in response to the tariffs. “These tariffs will be paid by American families and businesses without doing a thing to solve the very real problems at the border. Instead, Congress and the president need to work together to address the serious problems at the border.”

Mexico President Andrés Manuel López Obrador dispatched his foreign secretary to Washington to try to negotiate a solution. He said social problems are not solved with coercive measures, but also seemed convinced that Trump just needed to be informed about all the steps Mexico has taken to slow illegal migration.

Mexico has stepped up raids on migrant caravans traveling through the southern states of Chiapas and Oaxaca this year. It has deported thousands of migrants and frustrated thousands more who wait endlessly for permits that would allow them to travel legally through Mexico.

US Chamber may go legal route

He says it will be paid by American families and businesses without doing anything to remedy problems at the border.

Bradley called on Congress and the president to work together to address the problem.

The U.S. Chamber of Commerce represents the interests of more than 3 million businesses.

Administration officials told reporters in a briefing call Thursday evening that Mexico could prevent the tariffs from kicking in by securing its southern border with Guatemala, cracking down on criminal smuggling organizations, and entering into a “safe third country agreement” that would make it difficult for those who enter Mexico from other countries to claim asylum in the U.S.

“We fully believe they have the ability to stop people coming in from their southern border and if they’re able to do that, these tariffs will either not go into place or will be removed after they go into place,” said acting White House chief of staff Mick Mulvaney.

Trump said the percentage will gradually increase — up to 25% — until the migration problem is remedied.

Mexico has taken advantage of the United States for decades. Because of the Dems, our Immigration Laws are BAD. Mexico makes a FORTUNE from the U.S., have for decades, they can easily fix this problem. Time for them to finally do what must be done!

“Mexico has taken advantage of the United States for decades,” Trump said in a tweet. “Because of the Dems, our Immigration Laws are BAD. Mexico makes a FORTUNE from the U.S., have for decades, they can easily fix this problem. Time for them to finally do what must be done!”

Trump’s decision showed the administration going to new lengths, and looking for new levers, to pressure Mexico to take action — even if those risk upending other policy priorities, like the United States-Mexico-Canada Agreement, a trade deal that is the cornerstone of Trump’s legislative agenda and seen as beneficial to his reelection effort.

Keeping the economy rolling also is critical to Trump’s reelection, and business was not happy with the president’s planned tariff on Mexican imports.

The stock market’s tumble on Friday all but guarantees that May will be the first monthly loss for the market in 2019. The news hit automakers particularly hard. Many of them import vehicles into the U.S. from Mexico.

“These proposed tariffs would have devastating consequences on manufacturers in America and on American consumers,” said Jay Timmons, chief executive officer of the National Association of Manufacturers. “We have taken our concerns to the highest levels of the administration and strongly urge them to consider carefully the impact of this action on working families across this country.”

The response from Trump’s GOP allies on Capitol Hill was notably muted. Republicans have expressed unease with Trump’s trade and tariff wars and tried to reverse some of them.

“There is a serious humanitarian crisis at our southern border, and it is past time for my Democratic colleagues to finally get serious about meaningful action,” Senate Majority Leader Mitch McConnell said.

But the sudden tariff threat comes at a peculiar time, given how hard the administration has been pushing for passage of the USMCA, which would update the North American Free Trade Agreement.

Sen. Chuck Grassley, R-Iowa, a usual Trump ally and the chairman of the Senate Finance Committee, slammed the president’s action as a “a misuse of presidential tariff authority” that would burden American consumers and “seriously jeopardize passage of USMCA.”

Sen. Joni Ernst, R-Iowa, said the livelihoods of farmers and producers from her state are at risk and so is the USMCA.

“The USMCA would provide much-needed certainty to our agriculture community, at a time when they need it,” she said. “If the president goes through with this, I’m afraid progress to get this trade agreement across the finish line will be stifled.”

Daniel Ujczo, a U.S.-based international trade lawyer, said the threat would likely slow the deal’s progress in Mexico and put U.S. lawmakers who want to vote “yes” in a difficult position because companies in their districts will end up paying the tariffs.

Still, Ujczo and others wondered whether Trump would go through with the threat.

“This seems more theater and tactics than a strategy to solve the migration crisis and rebalance North American trade,” Ujczo said.

It wouldn’t be the first time Trump has punted on an immigration threat. In late March, Trump threatened to shut the entire U.S.-Mexico border if Mexico didn’t immediately halt illegal immigration. Just a few days later, he backed off the threat, saying he was pleased with steps Mexico had taken in recent days. It was unclear, however, what Mexico had changed.

Associated Press writer Kevin Freking and Paul Wiseman in Washington and Maria Verza in Mexico City contributed to this report.