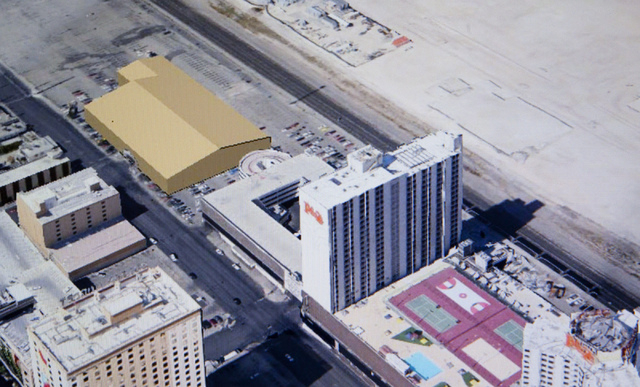 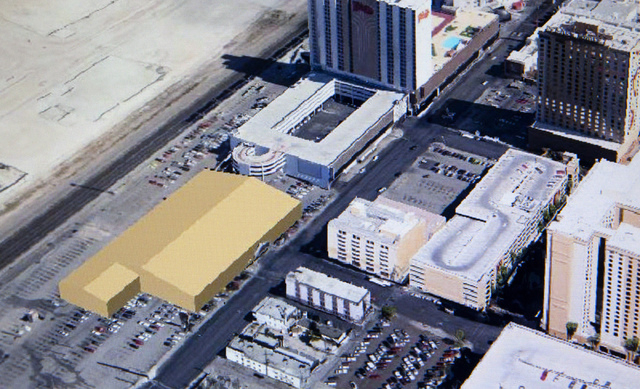 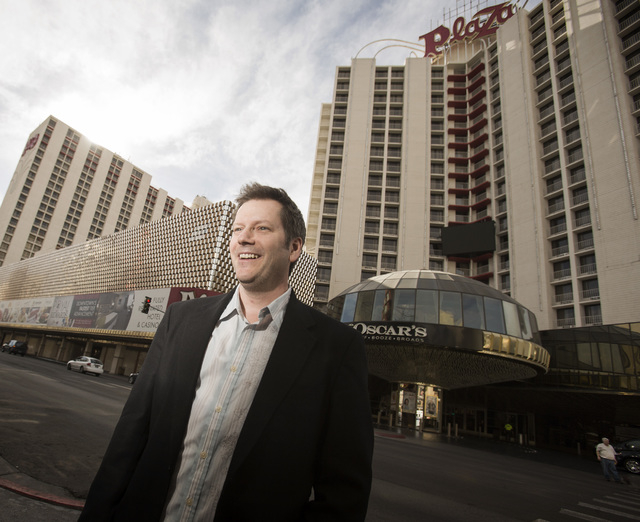 Las Vegas Wranglers President Billy Johnson as seen in front of the Plaza hotel/casino on Monday, Feb. 17, 2014. The Wranglers are moving a proposed rooftop ice-rink facility at the Plaza to a ground-level parking lot at the hotel-casino on Main Street in downtown, according to paperwork filed with the city Wednesday. The downtown hotel will serve as their hockey home, starting in the 2014-15 ECHL season. (Jeff Scheid/Las Vegas Review-Journal) 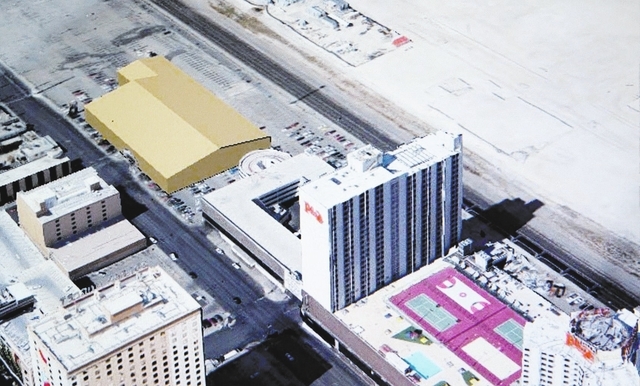 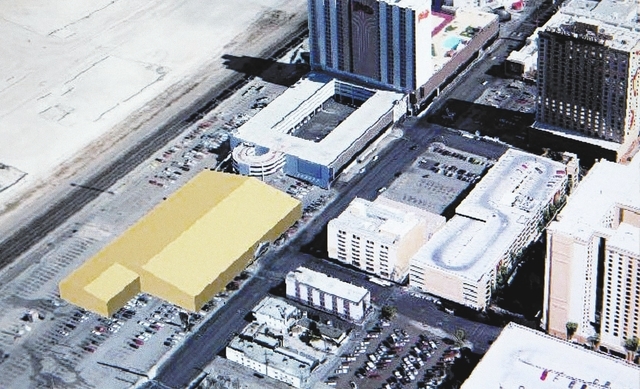 Roof-top minor league hockey at the Plaza in downtown Las Vegas won’t happen after all.

The Las Vegas Wranglers, an independent Double-A hockey club, is moving its proposed rooftop ice-rink facility at the Plaza to a ground-level parking lot at the hotel-casino on Main Street, according to paperwork filed with the city Wednesday.

In her two-page letter to Greg Kapovich at the city planning department, a team representative cited structural issues for shifting the tentlike arena structure to the Plaza parking lot on the south side of the hotel parking lot.

The Wranglers “are constructing a tent (at) grade level, over the surface parking lot. They had originally proposed it on the fifth level of the parking garage, where the hotel pool is located. Structurally it is difficult plus it would be crossing property lines on top of the parking structure,” Lucy Stewart wrote the city.

The new site plan shows the seating surrounding the entire rink. Under the previous plan, seating was in the shape of horseshoe around the rink. The plans, prepared by Las Vegas-based Avaruus Studios, call the project, “Wranglers Stadium @ The Plaza.”

The structure will resemble tentlike buildings at the World Market Center on Grand Central Parkway.

To address the fewer available on-site parking spaces, Stewart’s letter explained there will be available parking “throughout the downtown area. We anticipate attendees to visit other attractions downtown, perhaps to eat or drink at one of the many establishments in the Fremont Street corridor, either before or after the hockey game.

“There is street parking on the surrounding streets, the public garage at 4th Street, parking at the Neonopolis and various parking lots throughout the downtown area,” Stewart wrote the city.

“This should help divert people to other properties before or after the game,” she wrote.

The city’s Downtown Centennial Plan, which is designed to enhance more urban activities in downtown Las Vegas, allows builders to not provide as many parking spaces as would be required under standard parking guidelines.

Stewart told the Review-Journal that she could not comment on the new hockey facility plan and would try to line up someone who could.

Jonathan Jossel, managing director of Tamares Group, parent company of the Plaza, could not be reached for comment.

The only response from the Wranglers or the Plaza came in the form of a text message from Wranglers President Billy Johnson, who told the Review-Journal, “we wanted to explore a higher seating capacity.”

The first rooftop plan allowed seating for 3,500 fans. The second parking lot plan submitted Wednesday showed more space for fans. But an exact number of seats was not submitted.

Stewart’s letter did say that the tent arena seating count would range from 5,000-10,000, typically 8,500 for concerts. The tent arena will allow public ice skating sessions and stage other events such as concerts.

The Wranglers are moving from The Orleans Arena because the Boyd Gaming property chose to not renew the arena lease with the hockey team.

In January, the Wranglers decided to partner with the Plaza and invest $4 million in the fabric-shell structure to house a hockey rink and fan seating, across from the Fremont Street Experience. Average Wrangler game attendance is about 4,600, with 1,150 season tickets sold this year.

There is a five-year deal between the Wranglers and the Plaza, with the new Plaza lease renewable for another five years after the initial agreement expires.

The Wranglers also sent out a letter to its season ticket holders to discuss the ticket renewal process.

“Good news! We are getting very close to beginning the renewal process. Why the delay? Behind the scenes, we have been very diligent on getting the correct renewal information out the FIRST time. Having a final seating manifest before we begin the renewal process was important so that we don’t have to come back to you with changed seating arrangements upon a changed design. As they say, ‘Measure twice and cut once,’ ” the message to ticket holders said.

“While final seating designs are still being worked through, here is a quick update as to what you can expect.

1. Once we have a final seating manifest, we will begin to assign the closest and most comparable seat to the seats you have now.

2. You will have the opportunity to renew those seats or, we will have a process that will allow fans to move into available seats,” the letter said.

“We have consulted with a number of teams who have had a change of venue and we are carefully designing the process to be very fair. We are confident that the transition will be smooth and exciting. Soon you will be getting season ticket rates, a listing of the new benefit packages, and a full ECHL schedule that includes your Las Vegas Wranglers.

“Again, thanks for your patience as we work very hard behind the scenes on the nuts and bolts of building our new arena. It’s going be worth the wait! Until then, let’s get ready for the playoffs! Sincerely, Las Vegas Wranglers.”