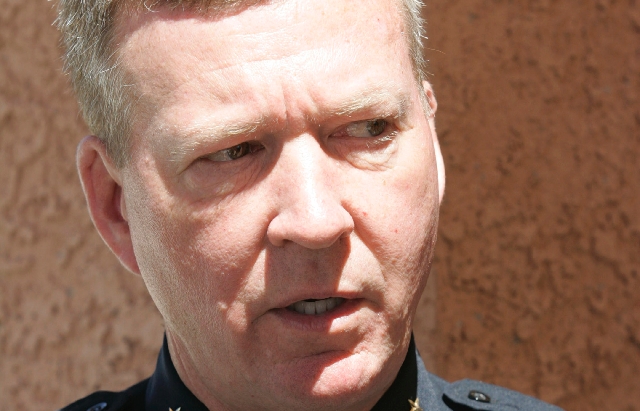 After stirring controversy and accusing city officials of conspiring to run him out of office, Boulder City Police Chief Thomas Finn has been fired.

City administrators told Finn the news at 7 a.m. Monday when he returned to work after a medical leave that began in January, he said.

In a news release, Finn said City Manager David Fraser “offered me the opportunity to resign my position, which I immediately declined.” He then was told his employment “was terminated.” No reason was given for the firing, he said.

Fraser declined to supply that reason but confirmed that the city has “separated employment” of Finn.

Tensions between Finn and city officials date to the Mongols motorcycle club’s national gathering, which took place at a Boulder City hotel in June.

At one point during that weekend, Councilman Cam Walker sent Finn a text message asking that he contact Mongols attorney Stephen Stubbs.

Stubbs had tried to reach Finn with concerns that Las Vegas police, who were part of the massive law enforcement presence that weekend, had trespassed on hotel property and that Boulder City dispatchers would not take a complaint.

Finn responded to Walker that he had “nothing to say” to Stubbs.

Though Walker publicly praised Finn’s management of the event, he later said that he was “disappointed” with Finn’s response and voiced concerns to now-retired City Manager Vicki Mayes.

In October, Stubbs was anonymously tipped off that before the June event, Finn sent a department-wide email requesting that officers delete emails about it so that a public information request would not reveal law enforcement strategy. Stubbs demanded that the city launch an investigation.

After Finn learned that Stubbs had spoken to City Attorney Dave Olsen about an investigation, he filed a lawsuit in November alleging that Stubbs, Olsen and several others, including a retired police sergeant, had all “acted in concert” to damage his reputation and have him fired.

The following week, the City Council voted to have the email allegations investigated by an outside agency.

The state attorney general’s office investigated and turned the matter over to the district attorney, but the findings have not yet been made public.

The council voted Dec. 11 to have an audit of the police department performed by an outside organization.

Since his dispute with the city began, Finn has filed a charge of age and religious discrimination with the Nevada Equal Rights Commission. He also has filed complaints about city officials with the district attorney and the Nevada Commission on Ethics.

Finn had served as Boulder City’s police chief since March 2006. He was president of the Nevada Sheriffs’ and Chiefs’ Association in 2010 and 2011.

“I have, for the most part, enjoyed a rewarding 32-year career, fourteen of those years as a chief of police,” he said, adding that he will continue to do everything in his power “to make Boulder City a better place to live and work.”