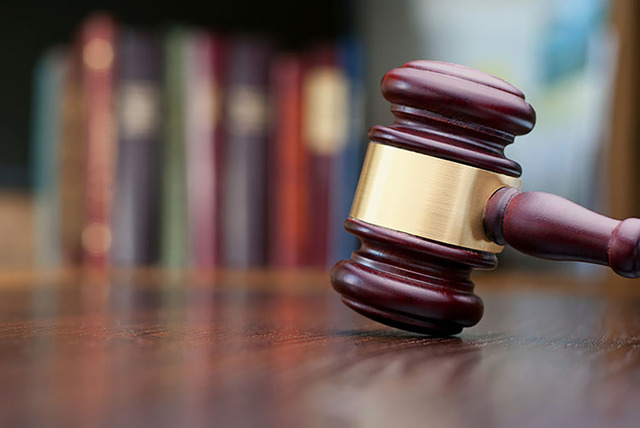 A veteran Boulder City police officer was indicted Thursday on more than a dozen felony charges that stem from the theft of money from his disabled son.

Jeffrey Grasso, 48, faces two counts of exploitation of a vulnerable person, two counts of theft, five counts of forgery, four counts of burglary, and one count of offering a false instrument for filing or record.

Between January 2014 and May 2016, according to the indictment, Grasso forged invoices from the Hyperbaric Institute of Nevada in Henderson in order to falsely withdraw more than $10,000 from charitable accounts and the proceeds of a lawsuit set up to care for his son.

Giulian Grasso, 21, suffered a traumatic brain injury after falling off his skateboard in April 2012. He now uses a wheelchair, and during a June 2016 interview with the Las Vegas Review-Journal about emergency treatment he received at St. Rose Dominican Hospital, Siena Campus, he was unable to use his left arm and was trying to learn to walk.

The Boulder City Police Department issued a statement Thursday saying Jeffrey Grasso, who has been with the department for nearly 15 years, had been placed on unpaid leave, pending the results of the criminal case and concurrent internal investigation.

In 2016, Grasso earned about $144,600 in pay and benefits, according to TransparentNevada.com.

“The Boulder City Police administration has been in close contact with officials at both the Henderson Police Department and the Clark County District Attorney’s office during the investigative process,” the statement read.

Before joining the Boulder City department, Grasso served as an officer in West Palm Beach, Florida.

Chief District Judge Elizabeth Gonzalez issued a $15,000 bail and ordered that Grasso turn over all of his weapons, including guns issued to him by the Police Department.

His attorney, Brian Smith, said he expected Grasso to turn himself in and post bail.

“I don’t have anything to say about the charges because I haven’t seen the indictment yet,” Smith said.

Clark County Detention Center records later showed that Grasso was booked Thursday. He is scheduled to appear in court Jan. 24.