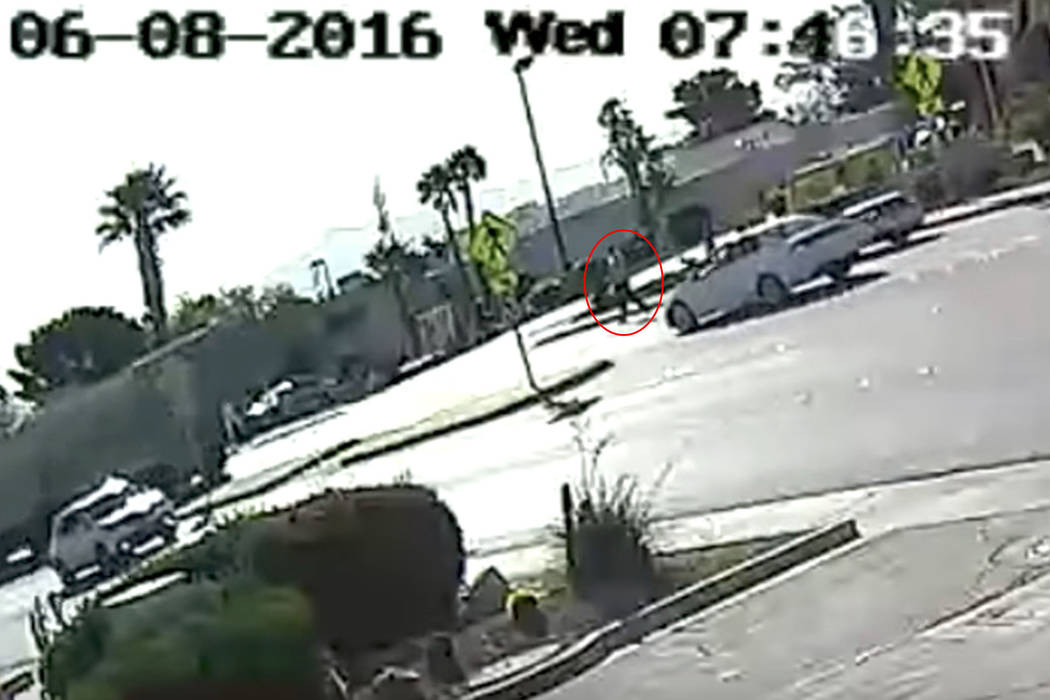 This screenshot from YouTube surveillance video shows John Hunt, inside the red circle, at a crosswalk in Boulder City on June 8, 2016. (YouTube)

Boulder City authorities on Monday refiled charges against a man who, in a federal lawsuit last week, accused the police department of falsifying a police report and altering a dashboard camera recording of his 2016 arrest.

The new charges came hours after the Las Vegas Review-Journal published an article late Sunday that detailed the allegations contained in John Hunt’s May 30th lawsuit, which addressed his June 2016 arrest on misdemeanor charges. In that case, Hunt, 29, was arrested for traffic violations and resisting a public officer after he staged a one-man protest of a crosswalk-enforcement sting police set up to nab motorists who did not yield to pedestrians.

Those charges were dropped a week later, after defense attorneys highlighted surveillance video that appeared to contradict the version of events contained in the police report. But on Monday, Boulder City Attorney David Olsen filed a criminal complaint charging Hunt with the four original misdemeanors and an additional count of obstructing a public officer.

The timing of the new charges — the morning after the Review-Journal article went live online and three days before the city’s one-year deadline to refile charges expires — drew immediate criticism from Hunt’s defense attorney.

“I’m in awe of how stupid this is,” said defense lawyer Stephen Stubbs. “It screams of retaliation.”

Olsen was not in his office when a reporter stopped by Monday. He did not return a message left with his clerk or a voicemail message requesting comment.

Hunt’s trouble with the police started last year when he was cited for failing to yield to a pedestrian as part of the crosswalk-enforcement sting. According to his civil lawsuit, he viewed the police department’s approach as unfair because the pedestrian decoy started crossing the street too late to give approaching motorists time to slow down and stop. So, in response, Hunt parked his car and started crossing the street ahead of the decoy — an action he claims was intended to give drivers adequate warning of a pedestrian in the crosswalk.

The latest obstruction charge accuses Hunt of preventing “a lawful public safety law enforcement exercise … by walking back and forth in a crosswalk being used for the enforcement activity.” His lawyer describes his actions as a form of protest that is protected activity under the First Amendment.

“They added the charge of obstruction for merely protesting, even though he wasn’t doing anything illegal and they did not block off the crosswalk,” Stubbs said.

The criminal complaint also restates passages from the police report that were described in Hunt’s lawsuit as false statements.

In one of the counts, Hunt is accused of leaving a curb and walking into the path of a vehicle “which is so close that it was impossible for the driver to yield.” The complaint states that Hunt forced one vehicle “to stop abruptly and another vehicle to slam on its brakes and skid to a stop to avoid hitting the Defendant.”

Hunt sued Boulder City, the Police Department and Sgt. John Glenn for violation of free speech and due process rights, unreasonable search and seizure, excessive force, malicious prosecution, false arrest, assault and battery, and negligence. He is seeking an unspecified amount of damages.

The lawsuit also includes allegations that, during prosecution of the case last year, police provided the defense with an altered dash-cam audio recording of the arrest. According to the civil complaint filed in U.S. District Court in Las Vegas, the audio contained exchanges that differed from what Hunt remembered about the day he was arrested. He sent the audio recording to two forensic audio experts, who both determined the recording to be inauthentic. One of the experts opined that “selective editing” occurred in certain areas.

Hunt is scheduled to be arraigned on the new charges Tuesday.