Ex-pastor convicted of murder for killing 2, including neighbor 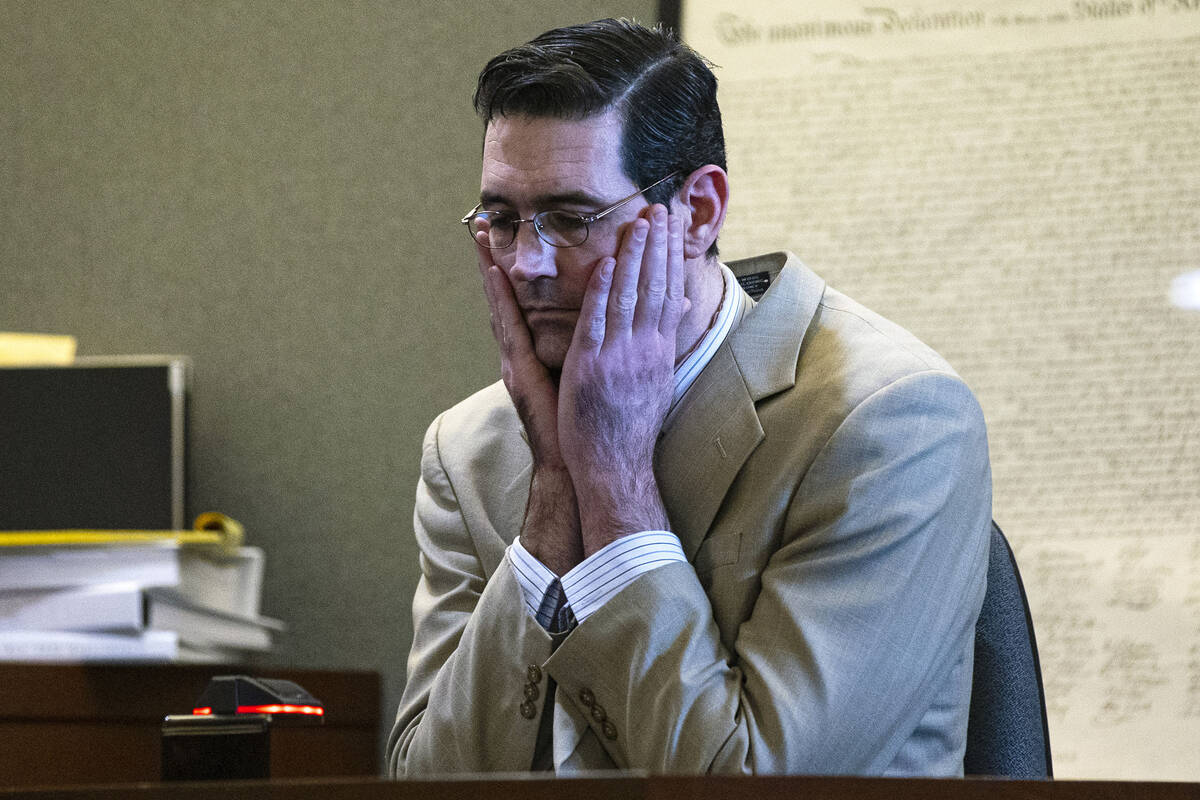 Andrew Cote, who shot and killed his next-door neighbor and her boyfriend, pauses as he testifies during his murder trial at the Regional Justice Center on Wednesday, May 11, 2022, in Las Vegas. (Bizuayehu Tesfaye/Las Vegas Review-Journal) @btesfaye

A jury convicted a former Las Vegas pastor on Thursday of first-degree murder for shooting and killing his 71-year-old neighbor and her boyfriend in 2020.

Andrew Cote, 38, had an 11-year feud with his neighbor, Mildred Olivo, that escalated into the killings on June 25, 2020, Cote told jurors during more than four hours of testimony on Wednesday.

Cote, a former pastor at Mountain View Baptist Church, said he shot Olivo and 54-year-old Timothy Hanson, who were both unarmed, because he felt that he and his 9-year-old daughter were threatened.

Cote did not react as the verdict was read, but the victims’ family members sobbed and hugged each other after he was led out of the courtroom in handcuffs.

Olivo’s daughter, Lissette Botello, said she was relieved when Cote was convicted. Botello said she wanted people to remember her mother for more than just the neighborhood feud.

“At the end of the day, my mom had a good heart,” Botello said.

Botello’s partner, Ginette Hamm, said they were both worried for Olivo throughout the 11 years she lived next to Cote. But Hamm and Botello said they were shocked when the petty disputes turned violent.

“You would never think that it would turn to anything like that,” Hamm said.

Cote said that on the night of the shooting, he heard Hanson, with whom he had previous disputes, yelling outside his home. Cote said he grabbed his 12-gauge shotgun and walked outside, where he found his 9-year-old daughter in the yard.

Aiming the shotgun over the wall that separated Cote’s property from Olivo’s, Cote shot his neighbor and Hanson in the head. Defense attorney Michael Sanft said Cote was acting in self-defense in light of the ongoing conflict between the neighbors.

Cote said his issues with Olivo began shortly after he moved into the home near Smoke Ranch Road and Decatur Boulevard in 2009. His 1-year-old Chihuahua, Princess, went missing that year, and he assumed Olivo had stolen the dog.

Both neighbors called the police on each other multiple times over the years and applied for restraining orders. Cote told jurors that Olivo had threatened to shoot his wife shortly after they moved in. Prosecutors argued that Cote had tried to get Olivo evicted.

After Cote tried to persuade Olivo to attend his church, he found torn-up pictures of Jesus on his front porch, Cote testified Wednesday. At one point, Olivo hung a white banner reading “Satan” in her yard where Cote could see it, Sanft said.

Cote said he began videotaping interactions with Olivo and installed a surveillance system to watch her. Hours before the shooting, Cote was videotaping Olivo watering plants in her yard when Olivo sprayed him and his daughter with a hose, and Cote reported her to police.

While testifying Wednesday, Cote admitted he didn’t intend to speak with Hanson when he heard him yelling outside his home.

“I think if your daughter is swimming in the ocean, and you see that there’s a shark swimming around, you’re going to jump in the water not intending on having conversations with the shark,” Cote said.