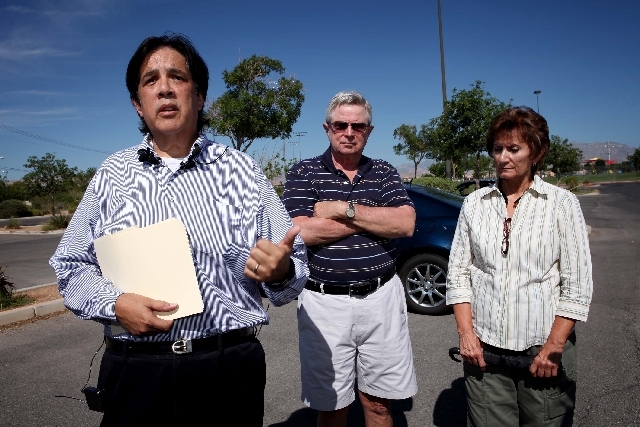 Robert Martinez, the civilian co-chair of the Las Vegas police Use of Force Board, left, speaks about his resignation from the board during a Wednesday press conference at Desert Breeze Soccer Complex. Behind him are civilian board members Glenn Rinehimer and Sandra Eddy, who also resigned Wednesday. 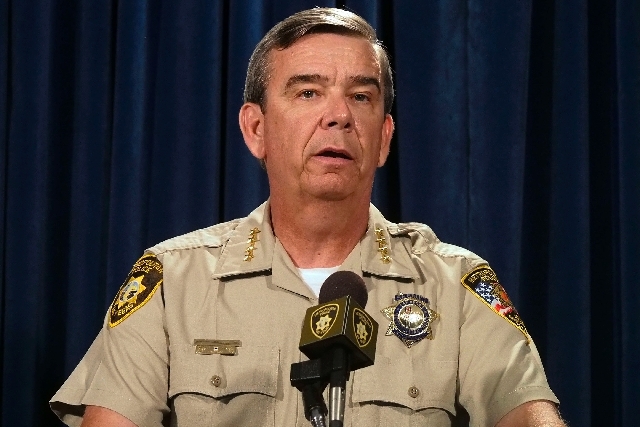 Clark County Sheriff Doug Gillespie is shown on July 22 announcing the suspension of officer Jacquar Roston. The department's Use of Force board had recommended the officer be fired.

But he was hopeful.

Martinez, 57, agreed to join the board last year as the civilian co-chairman, serving alongside Assistant Sheriff Ted Moody, who was appointed by Clark County Sheriff Doug Gillespie to oversee the renewed board.

Martinez also had a caveat, which he shared with Moody and other department leaders early in the process.

“The first sign of no transparency and no openness, and I’m calling bullshit,” he said.

Martinez quit the board Wednesday. He was joined by four other board members: Glenn Rinehimer, Sandra Eddy, Jay Shafritz and Miriam Rodriguez.

Their resignations followed Moody’s abrupt retirement last week. Gillespie appointed Assistant Sheriff Joseph Lombardo on Wednesday to replace Moody as chairman of the board, which reviews officers’ actions in shootings and other serious uses of force.

The five members, all volunteers, were disappointed in Gillespie’s decision to save officer Jacquar Roston’s job after the Use of Force Board unanimously recommended his firing in April.

“I am saddened by what I feel is your inability to maintain the integrity and credibility of the Critical Incident Review Process,” Martinez wrote in his letter. “I can no longer support the department’s consistent effort to minimize openness and transparency.”

Shafritz, a three-year veteran of the board, told Gillespie he no longer could serve “in good conscience.”

“I find your lack of support to be troubling,” Shafritz wrote.

The Use of Force Board is a seven-member panel of four civilians and three officers.

The civilian members are chosen from a pool of 18 and rotated every hearing. Moody and Martinez were nonvoting chairmen.

Martinez, a former television newsman in Las Vegas and now an activist with the Latino Democratic Caucus, said he heard the same promises from police throughout his time in Las Vegas: more openness and diversity, a stronger bond with the community.

He thought this time could be different. Martinez was impressed with Moody’s candor and confidence during community focus groups. Martinez was also pleased the department wanted different voices on the board.

“The board added representatives from the Asian, Latino, African-American communities. Women. The old and young. Pretty diverse,” Martinez said Wednesday. “If this is what we’re trying to do, I absolutely wanted to be part of it.”

But it was a waste of time, he said.

Roston, who shot an unarmed man in the leg in November, was combative and unapologetic for his actions during his use of force review and told board members he wouldn’t change how he handled the incident.

But during a pre-termination hearing a month later, Roston changed his tune and took responsibility for his actions. That board recommended a weeklong suspension, the most severe penalty short of firing, and Gillespie agreed.

“That doesn’t make sense,” Martinez said. “The Use of Force Board comes down hard, but then an apology is enough to save his job? What does that say to the other officers in the department about the process? It didn’t mean anything.”

“With all these facts and opinions as evidence, you decided to set that information aside and render a decision that again supports the employee and ignore the conclusions of members of the civilian population specifically assigned to scrutinize these matters,” he wrote to Gillespie.

Martinez said the board members had no personal grudge against Roston but felt Gillespie undermined the critical incident review process to satisfy the Las Vegas Police Protective Association, the union that represents rank-and-file officers.

“He invalidated everything we did and turned it into a political thing. He bowed to the PPA,” he said. “He wants to be sheriff again, and he can’t be the sheriff without having the PPA” on his side.

“Anybody who believes that is crazy. I have respect for Doug. I think Doug has respect for me, but Doug and I battle on everything,” Collins said, noting his union and the department are headed to contract arbitration in September. “For someone to say that hasn’t been watching. … He certainly doesn’t bow down to the PPA. I wish he did.”

The changes to the Use of Force Board came in the wake of a federal review into the department’s use-of-force policies and publication of a Review-Journal series, “Deadly Force,” a yearlong investigation of police shootings. Both the Justice Department and the newspaper found the board lacked transparency and didn’t hold officers accountable.

Before the changes, the board determined whether a shooting was “justified” or “unjustified.”

The changes were aimed at examining the totality of the officer’s actions rather than simply issuing a blanket approval or rare disapproval. Before the board changes, no officer in an on-duty shooting was ever recommended for firing.

Since the changes, there have been two: Roston and Jesus Arevalo, who shot and killed mentally ill Gulf War veteran Stanley Gibson in December 2011.

Martinez said the changes to the board worked. Civilian members began responding to every police shooting scene, were privy to “99 percent” of the investigation and allowed to ask questions.

“I started to think, ‘Wow, it has been effective here. They’re sincerely open to transparency, and we’re doing the right thing. Holy moly, it’s happening,’ ” Martinez said. “But now I realized, this might as well be the coroner’s inquest where the outcome was predetermined.”

“Not at this time,” he wrote in an email.

But in a statement through the department’s media office, Gillespie thanked the departing members for their service, with a reminder that he has final say.

“By both policy and employment contracts, all disciplinary issues up to and including termination remain the sole responsibility of the sheriff, and cannot be delegated to review boards,” the statement said.

Martinez said there are still good people on the Use of Force Board. But he wouldn’t participate any longer.

“I don’t want someone coming back at me telling me that I knew it was fixed, that the game was stacked against the board, but I stayed,” he said.

He recalled police officials asking prospective members whether they would be strong-willed, fair and ethical under heavy public scrutiny.

The members knew they had an officer’s career in their hands, and they didn’t take the responsibility lightly, Martinez said.

“They asked, ‘Can you be the lone voice, and stand up for your principles based on evidence and facts alone?’