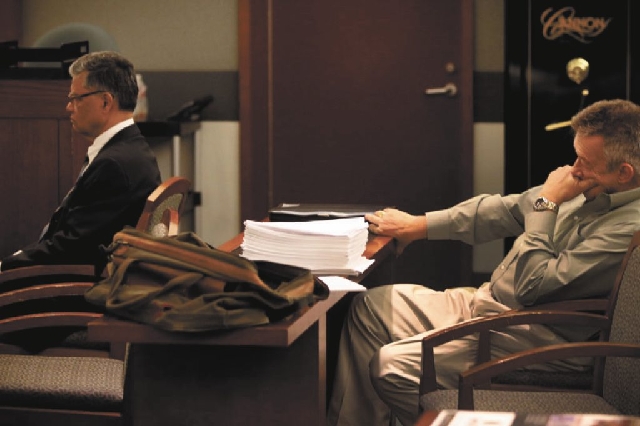 Dr. Dipak Desai, left, and nurse anesthetist Ronald Lakeman were in court Monday for jury selection in their criminal trial stemming from the 2007 hepatitis C outbreak. Tuesday, Judge Valerie Adair suspended jury selection, giving prosecutors and lawyers for the defendants time to respond to the Nevada Supreme Court, which is considering a defense motion about Desai's mental competency.

Adair is giving prosecutors and lawyers for the defendants, Dr. Dipak Desai and nurse anesthetist Ronald Lakeman, the time off to respond to the Nevada Supreme Court, which is considering a defense motion raising questions about Desai’s mental competency.

Desai’s lead defense lawyer, Richard Wright, on Monday filed the motion seeking the high court’s intervention, and the court ordered prosecutors to respond in writing by 5 p.m. today . Wright has until noon Friday to answer the prosecutors.

Adair told the lawyers she would resume picking a jury at 10 a.m. Friday.

So far, 30 prospective jurors out of a pool narrowed to roughly 400 have been questioned over the past two days.

Lawyers are predicting they might be able to settle on a jury by next week if the Supreme Court doesn’t issue an order staying the trial while it considers the defense motion. The trial is expected to last more than six weeks.

Desai’s right to a fair trial would be violated without an “accurate” evaluation of his ability to assist his lawyers, Wright wrote in his motion.

Desai, 63, who surrendered his Nevada medical license after the outbreak was disclosed in 2008, and Lakeman, 65, face a series of charges, including second-degree murder, theft, insurance fraud and criminal neglect of patients.

Another nurse originally charged in the high-profile case, Keith Mathahs, 76, pleaded guilty late last year and agreed to testify against Desai and Lakeman.

The charges focus on the hepatitis C infections of seven former Desai patients. Health officials concluded six contracted the deadly virus through unsafe injection practices on Sept. 21, 2007. Another was infected on July 25, 2007.

Last week, Adair ruled that strokes Desai suffered in February did not further harm his ability to help his lawyers and that there was no need to reopen the issue of his competency.

The judge made her decision after reading a 28-page report on Desai’s condition that Palestrant put together.

Palestrant suggested Desai might be exaggerating his physical impairment, a finding state medical experts made after past strokes.