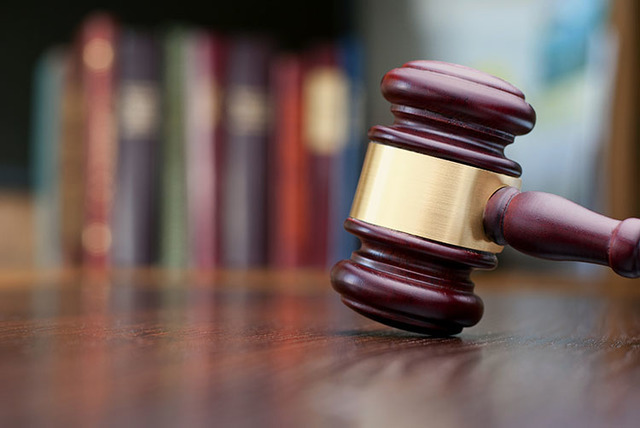 The son of a Chicago-area real estate developer who was convicted of bribery is facing 19 felony charges on accusations that he cashed forged checks worth more than $4,000 at a local casino, each bearing the handwritten signature of Clark County District Attorney Steven Wolfson and drawn on the DA’s victim assistance fund.

Robert Krilich Jr. told police he got the checks from his heroin dealers, according to his arrest report.

Krilich’s attorney, Dominic Gentile, declined to comment on the case.

Krilich’s father, Robert Sr., served nine years in prison for bribing elected officials, the Chicago Tribune reported in 2009. He was released from federal prison in 2006.

His son also has an extensive criminal history in Illinois, according to the newspaper.

In 1995, a federal judge sentenced Robert Krilich Jr. to 3½ years in prison after he pleaded guilty to a felony count of bank fraud. According to the newspaper, Krilich had accumulated 20 arrests and 10 convictions in various counties for drug dealing, forgery, theft and other crimes.

On Aug. 23, a Metropolitan Police Department fraud detective arrested Krilich shortly before noon after he allegedly attempted to cash a fraudulent check for more than $1,000 at Red Rock Resort. He had previously cashed five similar checks at the casino and a seventh was found in his possession, according to police.

According to the arrest report, Krilich began cashing the forged checks bearing Wolfson’s signature at the casino Aug. 19, using an ID he said belonged to a friend. The money came from the DA’s victim assistance fund, which can pay for crime victims’ emergency living expenses, housing assistance and transportation needs.

A county employee discovered the forgery because the cashed checks did not follow the correct numbered sequence for payments from the fund, according to the arrest report.

When Metro police responded to a call from casino security, it found approximately $5,000 in cash in Krilich’s wallet, as well as seven credit cards in his name and one credit card in the name of Thomas Franco.

Krilich also had a check from “the Eatery LLC” written out to Franco in the amount of $1,891.

Krilich told a detective he moved to Las Vegas about six months ago and is a heroin user, according to the report.

The forged checks came from his dealers, Krilich said, and he split the money with them after he cashed them. The dealers told Krilich the checks were legitimate, but they advised him not to use his ID while cashing them, he told officers.

Casino security told the Metro detective Krilich had used some of the proceeds to play slot machines and won a jackpot of more than $1,600, according to the report.

Las Vegas Justice Court documents state Krilich was to be admitted to Betty Ford Treatment Center for inpatient treatment Aug. 29. Gentile said he could not confirm whether his client was being treated there.

“Krilich made his admission as part of a plea agreement in which he admitted defrauding two suburban banks in a $81,000 check-writing scheme in 1992,” the newspaper reported.