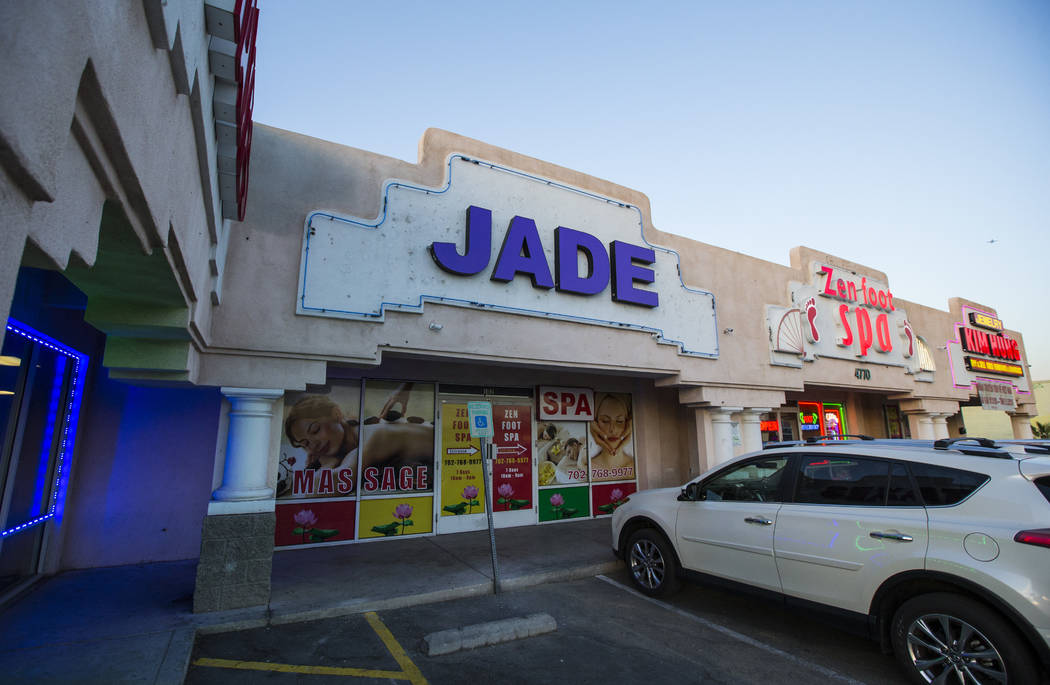 Jade Spa at 4770 Spring Mountain Road, one of two locations that was listed in the indictment of a sex-trafficking ring, in Las Vegas on Thursday, Nov. 15, 2018. Chase Stevens Las Vegas Review-Journal @csstevensphoto

Through the operation, the men earned more than $3 million, mostly from credit cards, Engler said in court Thursday morning.

When customers stopped by, either Lin, Leitzen, Matthews or Li lined the women up, allowing customers to choose who they wanted to have sex with, the indictment alleges. The men also recruited women to work for them as prostitutes, negotiated services with customers and scheduled prostitution shifts.

The first address is in a strip mall just west of the Las Vegas Strip. The second address, located in Chinatown, is listed as “Jade Spa” on Google Maps and is permanently closed.

Jade Spa customer reviews from about a year ago on Google Maps included, “Believe me your in good hands (sic),” “hits the spot,” and, “Thanks for the amazing shower massages.”

Six women were cited in the indictment as prostitutes from whom the men accepted earnings. It remains unclear if they will face prostitution charges.

“My office is proud to work with our local law enforcement partners to obtain this indictment in an effort to protect women from being exploited for profit and to hold these defendants accountable for their actions,” Attorney General Adam Laxalt said in a statement Thursday.

Collectively, the men face 76 counts of charges that include money laundering, placing a person in a house of prostitution, living off the earnings of a prostitute, pandering, racketeering and racketeering conspiracy.

As of Thursday afternoon, the men were free. An intial appearance was scheduled for Nov. 26.