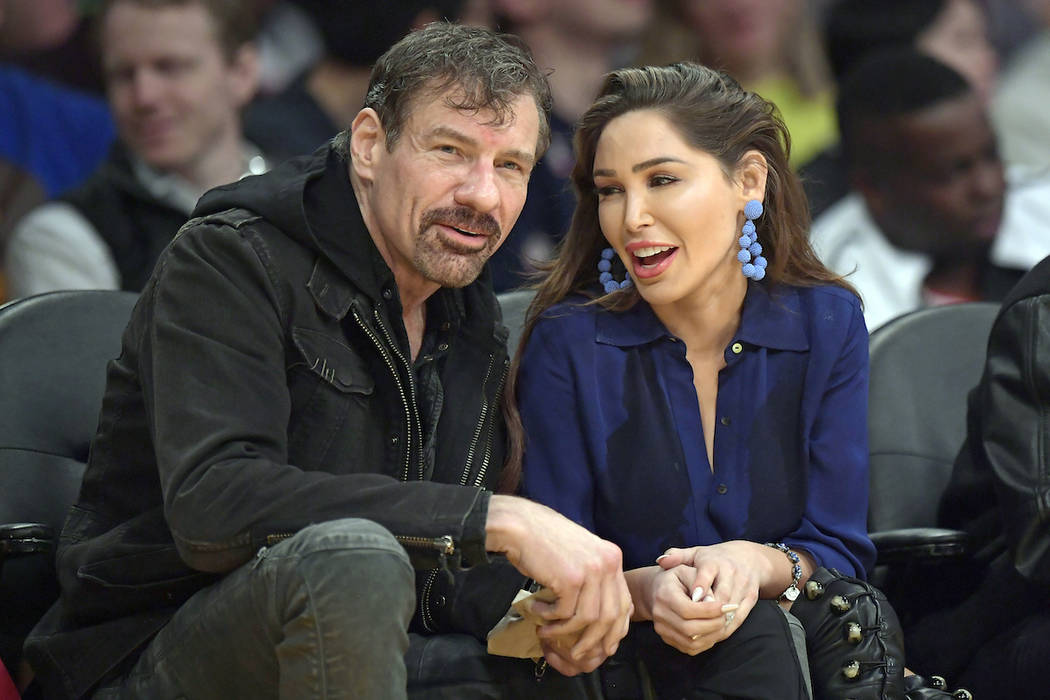 Henry Nicholas III and Ashley Fargo during the second half of an NBA basketball game between the Los Angeles Lakers and the Denver Nuggets in Los Angeles, March 6, 2019. (Mark J. Terrill/AP, File)

Attorneys for a Las Vegas man facing life behind bars for drug possession asked a judge this week to make sure he gets treated like a tech billionaire who avoided prison time in a similar case.

Prosecutors dropped drug trafficking charges last month against Nicholas, who has an estimated net worth of roughly $4 billion, and friend Ashley Fargo.

The pair were arrested at the Encore last summer after security officials discovered various narcotics and recreational drugs, including heroin, methamphetamine and cocaine, inside Nicholas’ guest room.

Should the two complete 250 hours of community service and drug counseling, their records will be wiped clean, according to the deal.

“Defendants must be treated equally under the law,” Fumo wrote. “The state must not be allowed to discriminate based on income level, social status, or who paid to put him on television.”

Wolfson declined to comment on the motion Thursday. He told the Las Vegas Review-Journal: “Our position will be fully discussed in our court filings.” Prosecutors had not filed a response as of late Thursday.

Nicholas and Fargo also each agreed to make $500,000 donations to an unspecified Las Vegas-area drug treatment and rehabilitation program. Attorneys for Nicholas, David Chesnoff and Richard Schonfeld, have said he would continue to “champion victims’ rights.”

Jefferson, a 53-year-old felon, was arrested in February 2018 after he was accused of failing to register his address with the Metropolitan Police Department.

An officer told a Clark County grand jury that he found two bags of cocaine wedged in the passenger seat of a patrol car while Jefferson was being taken to jail.

Nicholas’ Encore arrest was not the first time authorities leveled allegations of drug trafficking in Las Vegas against him. In 2008, federal prosecutors in California charged him with conspiracy to distribute and possession with intent to distribute controlled substances.

An indictment alleged in part that between May 2003 and May 2008, Nicholas “knowingly and intentionally maintained and used” a condominium at Turnberry Towers on Paradise Road “for the purpose of distributing and using controlled substances.”

The federal charges were dropped in 2010.

Fumo’s law partner, Tom Pitaro, pointed to the history of allegations against Nicholas.

“How do we ever tell a poor man, ‘You’re going to get justice?’ You can’t say that,” Pitaro said. “This guy is a serial drug dealer, but because he’s a billionaire he can get away with it.”

Fumo’s motion is the first of its type known to be filed in Clark County, but attorneys in the Clark County public defender’s office have been circulating similar papers since Nicholas’ deal was announced. Fumo said he’s not done.

“Unless the DA gives us an offer like it, I intend to file it in every case,” he said. “It shows that the rich get away with what the average person can’t. The negotiation that was worked out in the Nicholas case is an excellent negotiation. I would just like to see it applied universally, rather than just to the rich.”