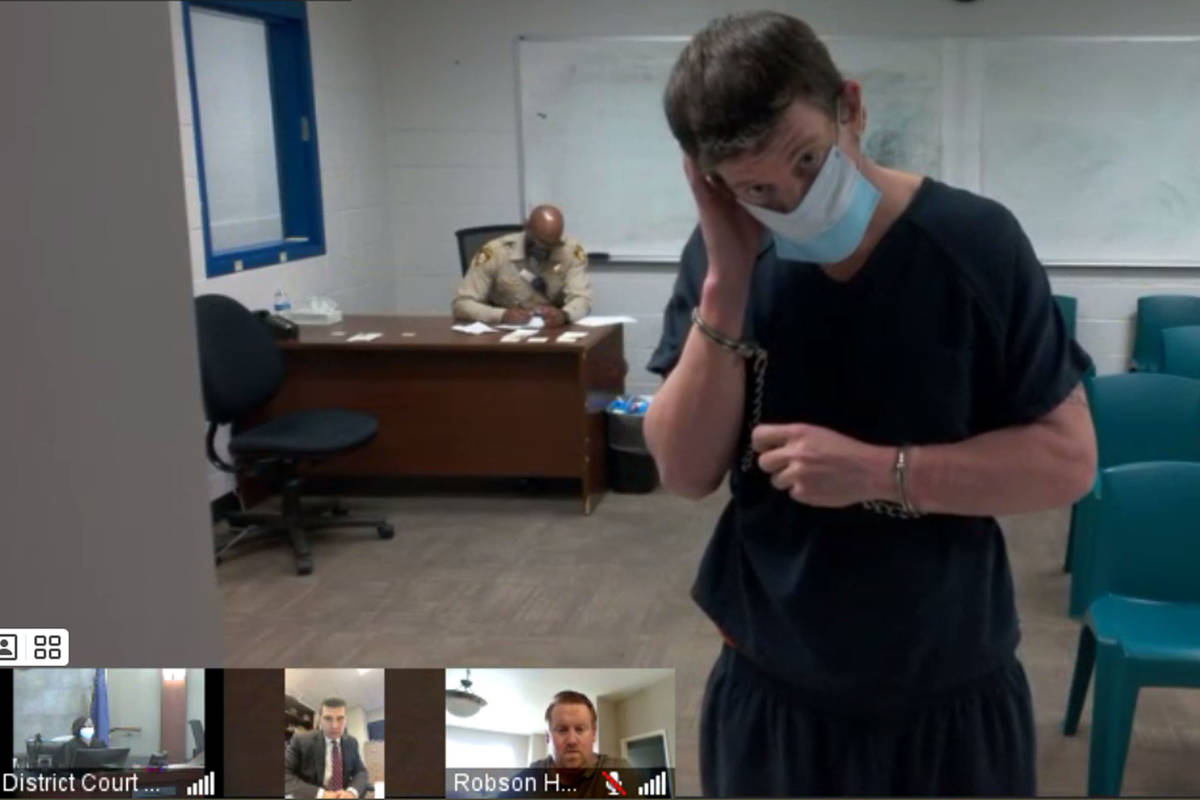 This screenshot shows Shane Loyd during a court hearing on Feb. 9, 2021, in Las Vegas. Loyd pleaded guilty to three felonies for shooting at Las Vegas police officers last year and was sentenced to prison on Tuesday. (David Ferrara/Las Vegas Review-Journal)

Following a negotiation between prosecutors and Shane Loyd’s public defender, District Judge Christy Craig ordered him to serve four to 10 years for the October shooting in the 3500 block of Villa Knolls North Drive, near Pecos Road and Tropicana Avenue.

“I’m ashamed of my actions,” Loyd said during the videoconference hearing from the Clark County Detention Center. “I apologize to the victims.”

Loyd, who initially faced attempted murder charges, pleaded guilty earlier this year to one count each of assault with a deadly weapon, discharging a firearm into an occupied structure or vehicle, and ownership of a firearm by a prohibited person.

Police had been called to the scene after a report of a shooting. While investigating, officers found someone facing a temporary protective order that had not been served.

As the officers served the order, police said, Loyd — identified by neighbors as “Showboat” — walked up and shot at the officers with a .22-caliber revolver. One officer shot back, and Loyd ran from the scene.

While running from officers, the man “turned and fired several more rounds,” police said. Officers took cover and lost sight of him.

Neither the officers nor Loyd, who later was found hiding in an electrical shack on Tropicana, were hurt in the shooting.

Loyd was convicted of assault after he attempted to hit an officer with his car while fleeing from police in 2002, according to court records.

In August of that year, Metropolitan Police Department gang detectives were searching for a “wanted person” leaving a funeral service for two Rolling 60s gang members. The wanted person was in the passenger seat of a car that Loyd was driving when officers attempted to stop the vehicle, according to Loyd’s 2002 arrest report.

He pleaded guilty to felonies of assault, refusing to stop for an officer and receiving or transferring stolen vehicles, court records show.

Deputy Public Defender Robson Hauser said Loyd struggled with drug addiction, and that his family abandoned him when he was 12.

“He’s not the type of guy who intentionally shoots at police,” Hauser said. “I truly do not believe he did that intentionally in this case.”