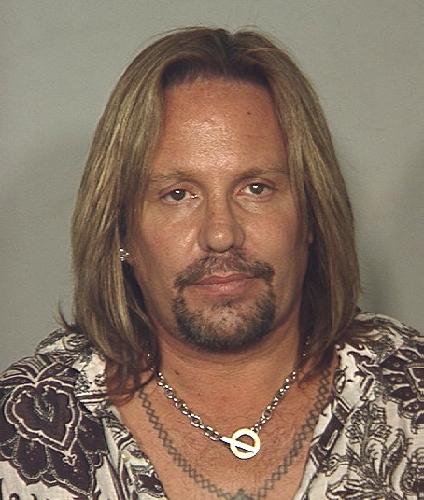 Hard rocker Vince Neil pleaded guilty Wednesday to driving drunk after picking up the charge in June as he left the Las Vegas Hilton in his Lamborghini sports car.

As part of a plea deal, the 49-year-old Mötley Crüe frontman will have to spend 15 days in the Clark County Detention Center followed by another 15 days on house arrest.

Neil also must pay a $585 fine, attend DUI school and take part in an online victim impact panel. He must surrender at the county jail by Feb. 15. The mandatory minimum confinement for drunken driving is two days.

Neil’s attorney, David Chesnoff, said his client intends on fulfilling all the obligations imposed in the sentence.

The hearing was at 7:30 a.m., 1½ hours earlier than scheduled. Chesnoff said the hearing was moved up because he had another matter in a different court scheduled for 9 a.m.

Prosecutors had sought jail time for Neil because of a 1984 drunken driving crash in California that resulted in a man’s death.

In December 1984, Neil was charged with driving under the influence of alcohol and vehicular manslaughter after hitting an oncoming vehicle while returning to his home in Redondo Beach, Calif., after a trip to a liquor store.

The collision resulted in the death of Finnish drummer Nicholas “Razzle” Dingley of the band Hanoi Rocks. Neil pleaded guilty to those charges and was sentenced to 20 days in jail and ordered to pay $2.5 million in restitution.

Authorities said Neil was driving 60 mph in a 45 mph zone and was weaving between lanes when he was pulled over.

Neil told police he had three glasses of champagne and was at the Las Vegas Hilton before he was arrested, according to a police report. Neil had bloodshot eyes, smelled of alcohol, was swaying, and his speech was slurred, according to the report.

Neil failed several field sobriety tests and a Breathalyzer test. According to the report, his blood-alcohol level was nearly three times the legal limit.

The arrest came after Neil recently said he had stopped abusing drugs and alcohol.

Neil moved to the valley in the mid-1990s and has several businesses in Las Vegas, including restaurants, tattoo shops and a charter airline service.