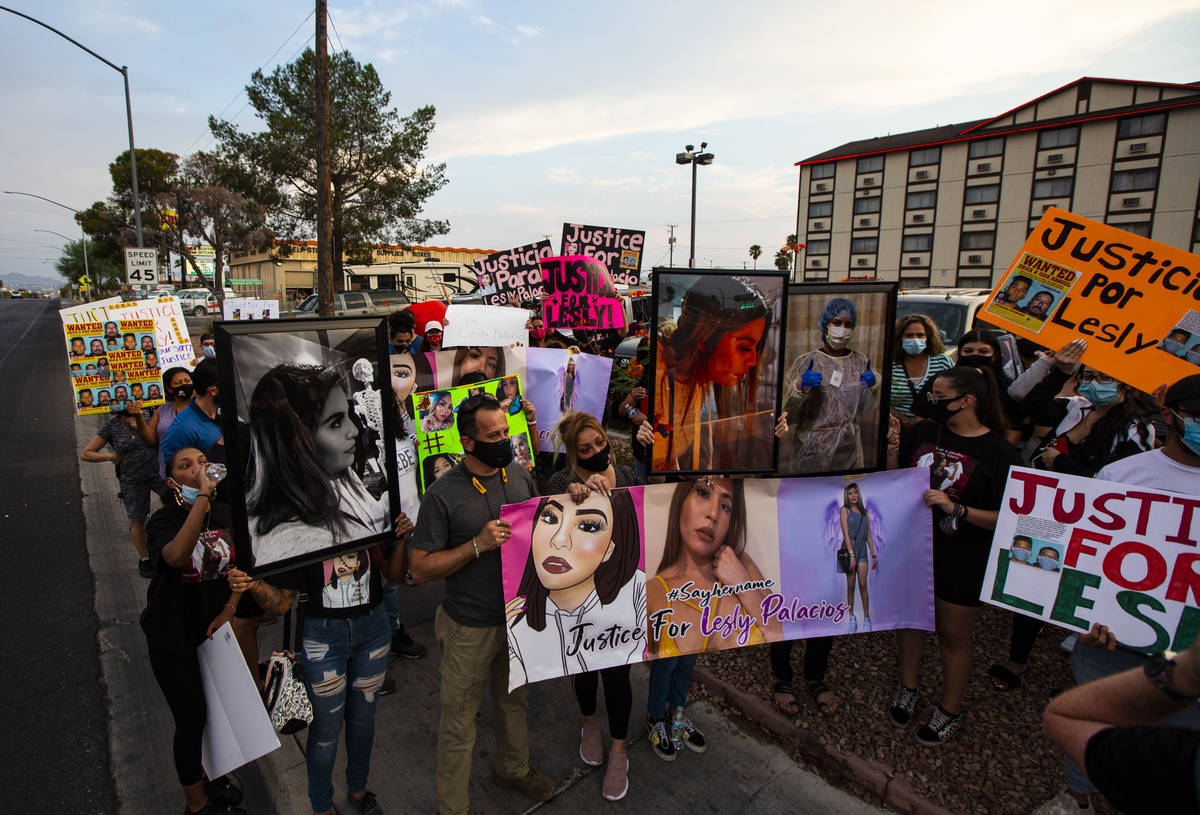 People gather in memory of Lesly Palacio, who was found slain near Valley of Fire State Park, at the Longhorn Hotel and Casino in Las Vegas on Friday, Sept. 18, 2020. (Chase Stevens/Las Vegas Review-Journal) @csstevensphoto 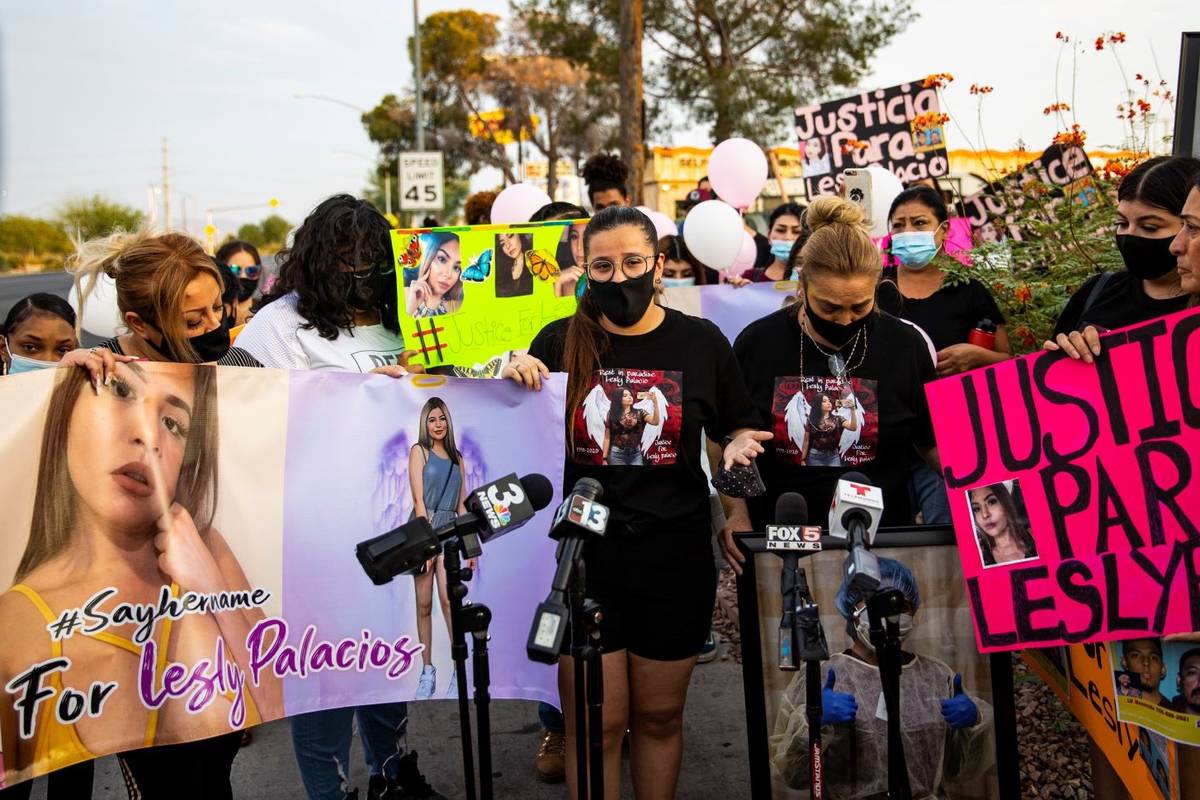 Karley Palacio talks about her sister Lesly Palacio, who was found slain near Valley of Fire State Park, at the Longhorn Hotel and Casino in Las Vegas on Friday, Sept. 18, 2020. (Chase Stevens/Las Vegas Review-Journal) @csstevensphoto 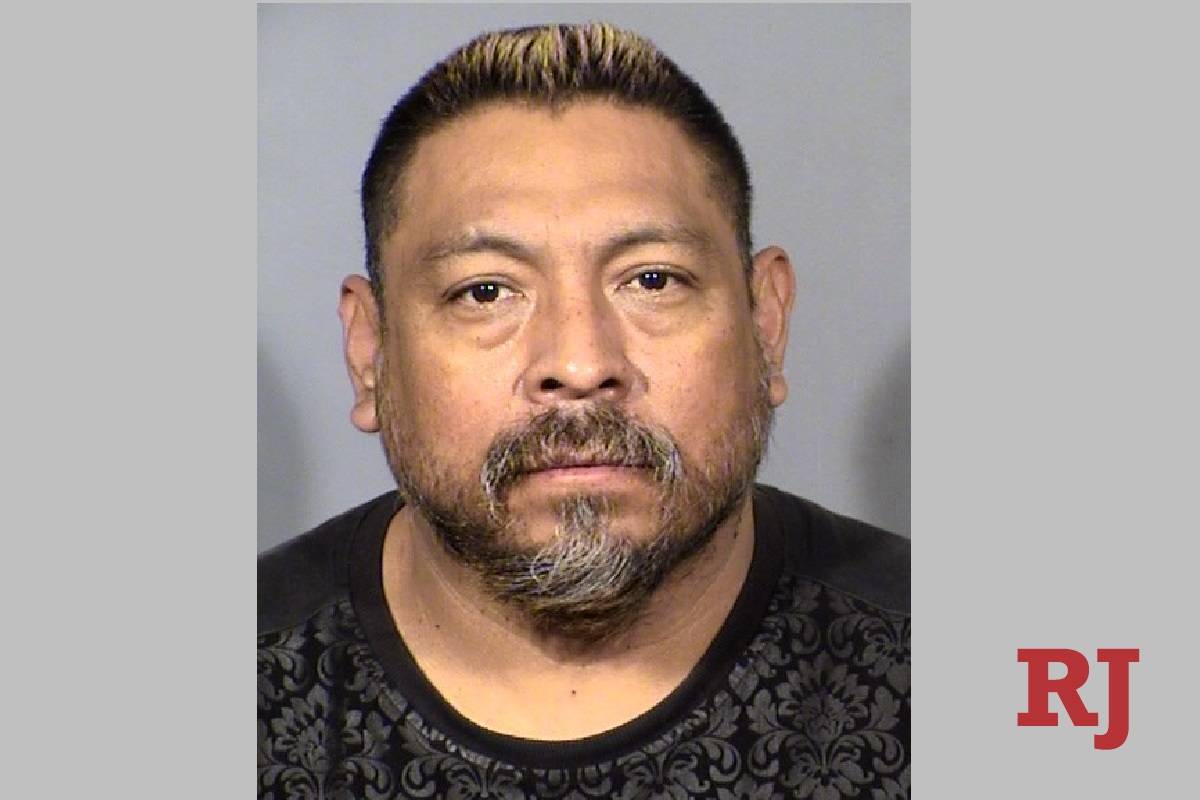 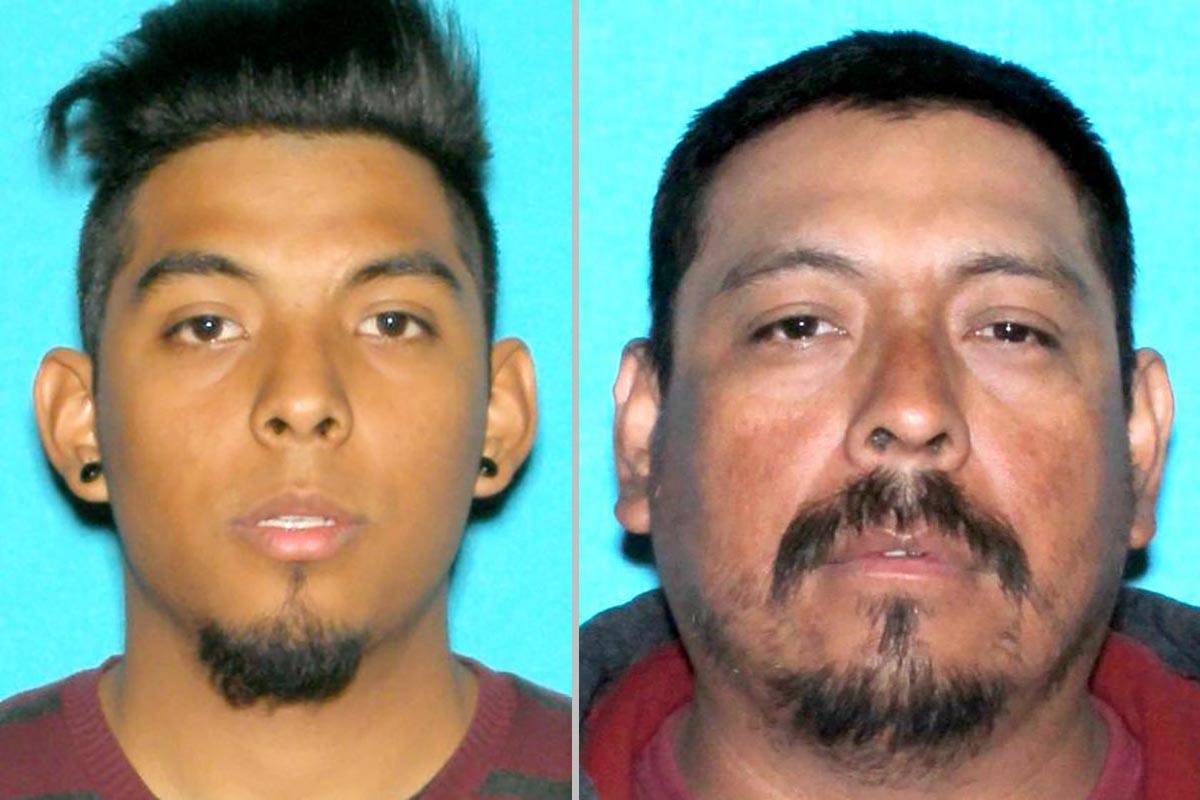 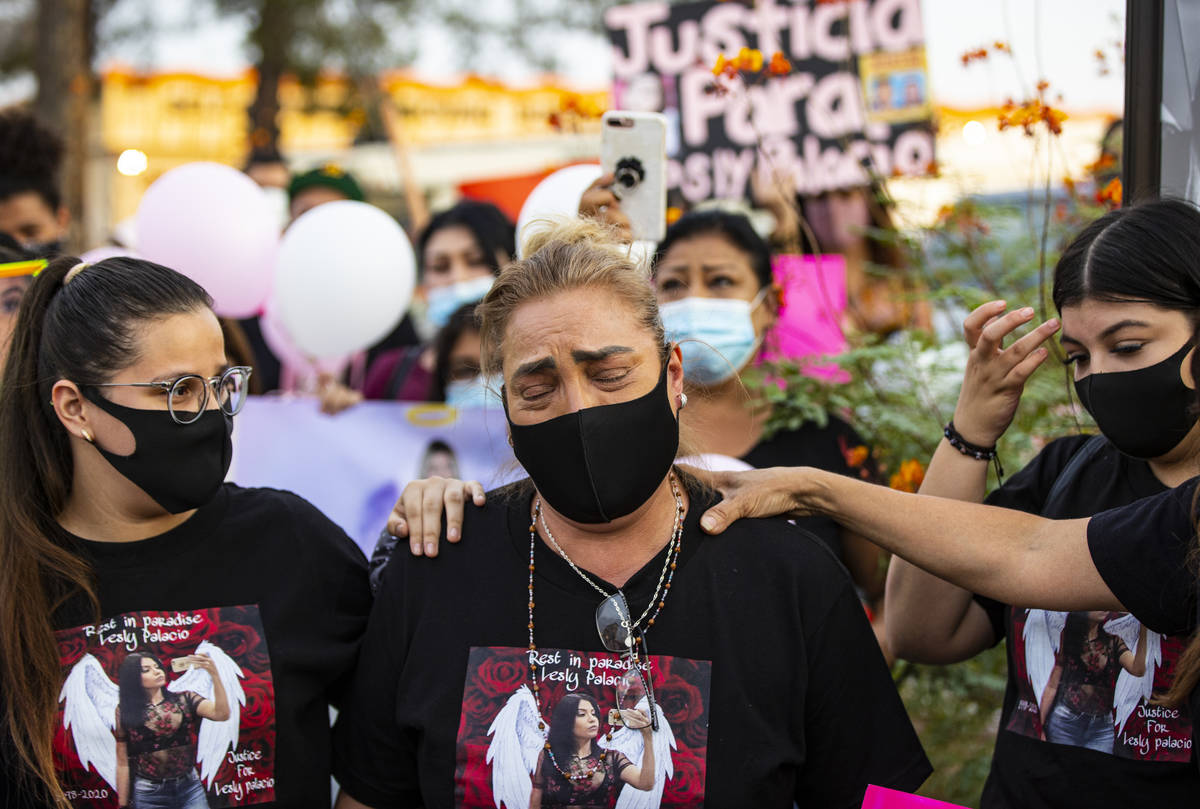 Aracely Palacio, center, is comforted while talking about her daughter Lesly Palacio, who was found slain near Valley of Fire State Park, at the Longhorn Hotel and Casino in Las Vegas on Friday, Sept. 18, 2020. Daughter Kaly Palacio, left, looks on. (Chase Stevens/Las Vegas Review-Journal) @csstevensphoto 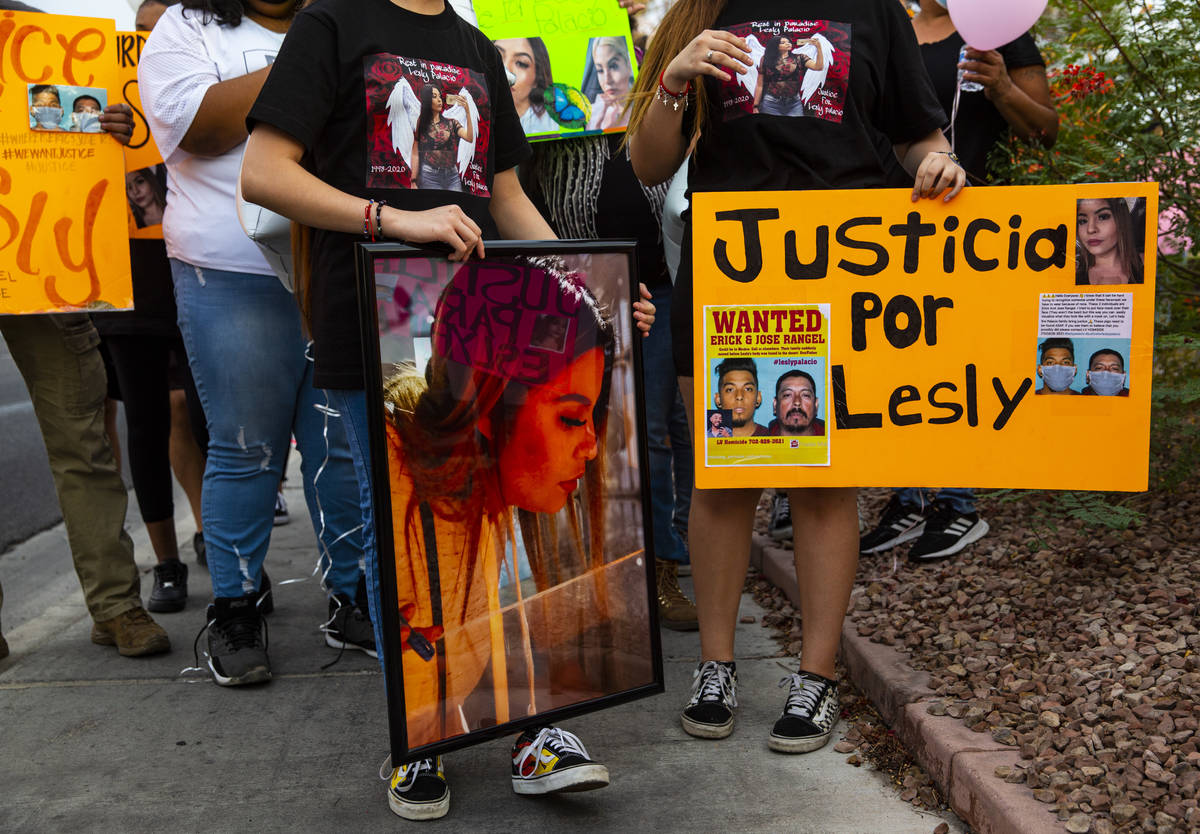 Family members hold pictures of Lesly Palacio, who was found slain near Valley of Fire State Park, as they gather in her memory at the Longhorn Hotel and Casino in Las Vegas on Friday, Sept. 18, 2020. (Chase Stevens/Las Vegas Review-Journal) @csstevensphoto

Surveillance video captured the last moments of Lesly Palacio’s life, as she had drinks and dinner with a man she had known for at least a decade, new court records show.

She exchanged messages with her sister, Karely, through the night of Aug. 28 and into the early morning hours, according to grand jury transcripts made public this week.

Before dawn the next day, Karely Palacio received her sister’s last text message.

“She just said that she needed to talk to me about something,” the woman testified.

Lesly Palacio had been out with 25-year-old Erick Rangel-Ibarra, a family friend, for hours.

Through video, homicide detectives would trace their steps from the Longhorn hotel-casino in the southeast valley to the Bourbon Street Sports Bar at Charleston and Nellis boulevards, and back to Rangel-Ibarra’s home a few miles away.

Months later, his father, Jose Rangel, would admit to helping his son drag the 22-year-old woman’s body out of their Las Vegas home and flee to Mexico, the transcripts show.

Rangel-Ibarra was charged with murder and remained at large on Friday.

His father told detectives that after the woman died, he and his son decided to gather some money and drive to Mexico, where they eventually split up, according to the transcripts. He turned himself in at a border crossing in San Diego last month and made a brief court appearance via video from the Clark County Detention Center on Friday. He faces a charge of destroying or concealing evidence, and is due back in court next week.

The father and son were captured on home surveillance video carrying a lifeless Lesly Palacio into the passenger side of Erick Rangel-Ibarra’s white 2004 Ford F-150 pickup truck.

“Erick is starting to freak out at that point and states that he has to do something with the body,” Metro homicide Detective Breck Hodson told a grand jury, recalling his interview with the father. “Jose decided that he needed to help him get the body out of the residence before anyone else within the household, being his daughters or his wife, saw the body to eliminate their involvement.”

As his son drove off, Jose Rangel hosed down the driveway, gravel and grass outside their home, according to the transcripts. At some point, the younger man called a friend, asking for gas and saying, “I killed a b——, and I can’t be seen on video surveillance buying gas.”

Karely Palacio testified that she drove to the Rangel home later that morning and saw Rangel’s family members, one in latex gloves, moving furniture and cleaning supplies.

Less than two weeks later, Lesly Palacio’s decomposed body was found in Moapa Valley near Valley of Fire State Park. Authorities have not revealed how she died. Jose Rangel told detectives that he did not notice any physical injuries on her body.