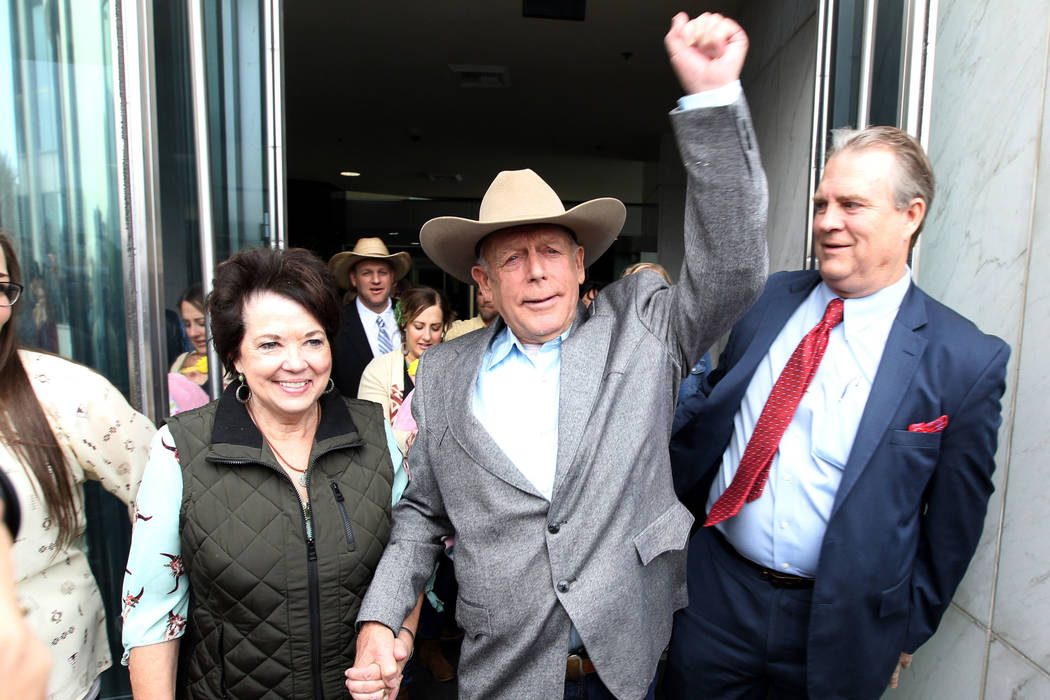 Cliven Bundy walks out of Lloyd George U.S. Courthouse in Las Vegas a free man with his wife Carol Monday, Jan. 8, 2017, after a federal judge dismissed the case with prejudice against him, two of his sons and another man in the Bunkerville standoff. At rear, in a cowboy hat is their son Ammon Bundy. (K.M. Cannon/Las Vegas Review-Journal) @KMCannonPhoto

A year ago, U.S. District Judge Gloria Navarro threw out the case against Bundy, his sons Ammon and Ryan, and independent militia member Ryan Payne after finding “flagrant prosecutorial misconduct.”

“Any missteps were inadvertent (or at worst negligent), and those errors did not merit the court’s strong condemnation of the prosecution team,” White wrote.

Navarro initially granted a mistrial after finding that the federal government improperly withheld evidence. She said video surveillance, maps and FBI interview information were willfully withheld by the prosecution in violation of due process required by the U.S. Constitution.

“They are apparently hopeful that this court, if an appeal is heard, will relieve them from the prospect that their careers at the Department of Justice are over, much more the potential for disbarment,” Klayman wrote. “Given the record, this ‘Hail Mary’ attempt to skate from their own liability is destined to fail.”

The Bundys and others were charged after an April 2014 armed standoff with federal agents who tried to execute a court order to round up Cliven Bundy’s cattle.

White argued that the rancher “continues to unlawfully graze cattle.”

Citing “massive disclosures” from the government throughout the case, the prosecutor denied purposefully withholding evidence, including a reported surveillance camera aimed at the Bundy ranch, the FBI’s presence, “snipers” and assessments of threats posed by the Bundys.

She also wrote that in two years leading up to the trial, prosecutors turned over 1.4 terabytes of evidence “after reviewing hundreds of thousands of pages of documents,” while protecting victims, witnesses and law enforcement “from harassment and threats.” She referenced the June 2014 shooting that left Las Vegas police officers Igor Soldo and Alyn Beck dead “at the hands of two of Bundy’s extremist followers.”