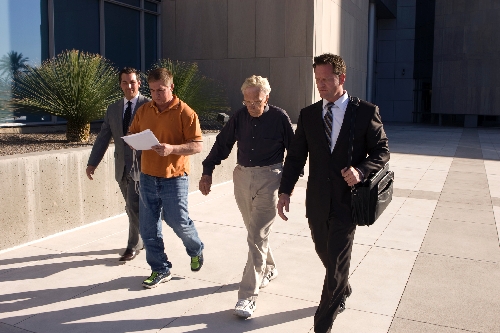 Federal authorities announced Thursday the indictment of an 87-year-old physician, his assistant and a pharmacist on charges of conspiring to unlawfully distribute the prescription painkiller oxycodone.

Dr. Henri Wetselaar and David Litwin, 52, both of Las Vegas, and pharmacist Jason C. Smith, 43, of Michigan were charged in a 23-count indictment that grew out a joint law enforcement crackdown on prescription drug trafficking, said U.S. Attorney Daniel Bogden at a news conference.

The indictment was unsealed after the arrests of all three men.

Prescription drug abuse is the fastest-growing drug problem facing authorities, Bogden said. In Clark County, he said, the coroner reports that more deaths are caused by pharmaceutical drugs than are caused by heroin, cocaine and methamphetamine combined.

"No one is immune, and no one is untouched by this growing drug problem," Bogden said.

The indictment charged that Wetselaar and Litwin prescribed large amounts of addictive prescription drugs — including, oxycodone, hydrocodone, Xanax and Soma — to people who did not have the medical need for the drugs.

Wetselaar did house calls and also maintained a practice at 4525 Sandhill Road, the indictment said.

It said both men steered their patients to Lam’s Pharmacy, 2202 W. Charleston Blvd., where Smith, a licensed Nevada pharmacist, filled the prescriptions with the help of his staff knowing the drugs would be "illegally diverted." Two patients were known drug dealers.

Wetselaar’s attorney, Robert Draskovich, said he was concerned that the government spent its time pursuing an 87-year-old doctor who was operating a legitimate pain management clinic and about to retire.

Both Wetselaar and Litwin made initial appearances late Thursday before U.S. Magistrate Judge Peggy Leen and were released on their own recognizance. Smith appeared in federal court in Detroit.

State records show that Wetselaar received his medical degree from the University of Amsterdam in the Netherlands in 1952. Litwin, who was ordered placed on electronic monitoring, told Leen he got a medical degree in surgery in Mexico. Assistant U.S. Attorney Patrick Walsh said Litwin earned a living as a surgeon for 17 years in Mexico.

According to the indictment, Litwin does not have a medical license in Nevada, and federal authorities could not verify that he had medical credentials in the United States.

Bogden said that since January 2010, federal and local authorities have charged 70 people, including two physicians, with trafficking in addictive painkillers.

Four federal prosecutors have been assigned to the case, which is primarily being investigated by the DEA and Internal Revenue Service. Local and state law enforcement agencies are assisting.

"A large part of our effort to combat unlawful prescription drug trafficking in Nevada has included the targeting and investigation of local physicians and pharmacists who are writing and selling prescriptions that are not being issued for legitimate medical purpose or in the usual course of professional practice," Bogden said in a statement.

"Our federal and local law enforcement partners are working tirelessly to shut down these dangerous pill mills and pharmacist co-conspirators."

Law enforcement officials have embarked on a major effort to heighten awareness about prescription drug abuse and proper disposal, he said. A law enforcement summit is scheduled for Monday in Las Vegas.

In May, federal authorities charged another physician, James Tinnell, 74, with selling prescriptions for large amounts of drugs, including Xanax and painkillers. His trial is set to begin Oct. 31.

Prosecutors filed charges in November against 27 people linked to a ring that trafficked in oxycodone between Las Vegas and Alaska. The group laundered $1.2 million in drug profits through a custom motorcycle and paint shop in Las Vegas, authorities charged.

The reputed leader of the ring, Nicholas Ghafouria, and 17 others are waiting to stand trial in the case. Nine defendants have pleaded guilty.