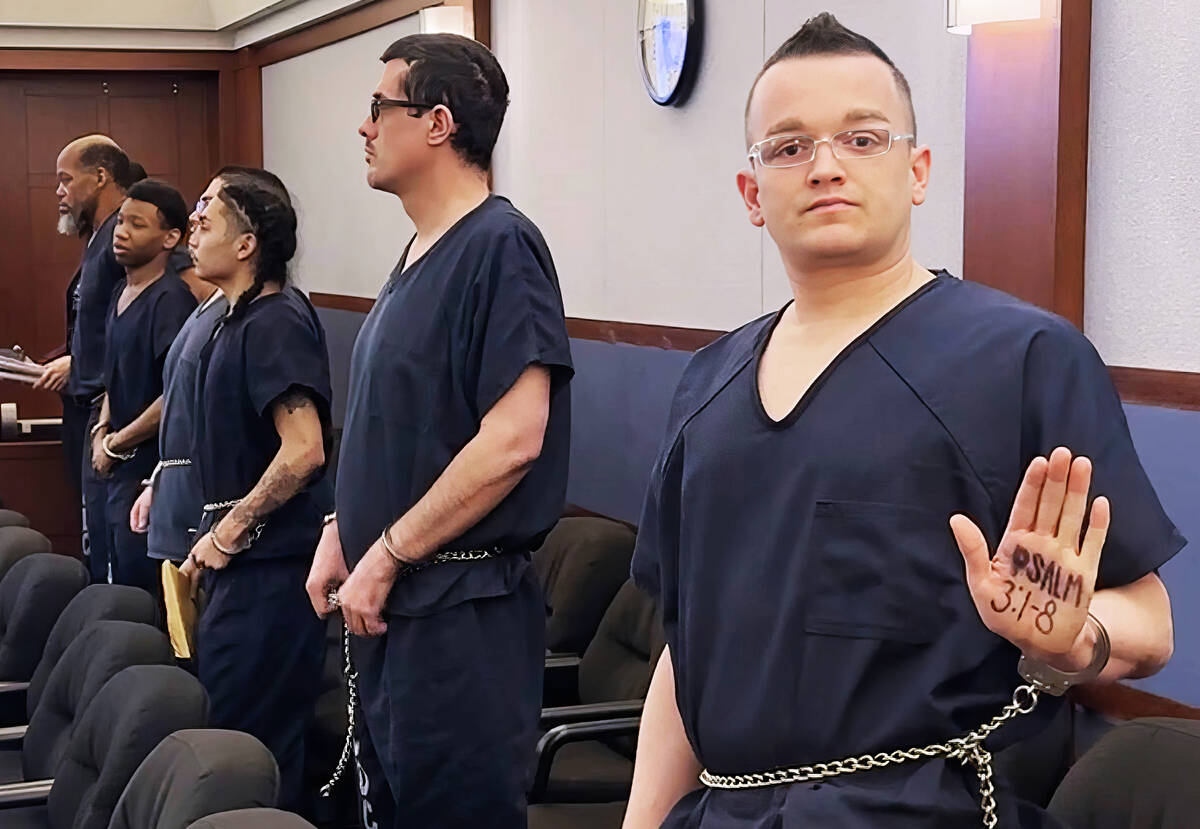 Brandon Toseland, who is accused of killing his girlfriend’s 4-year-old son and leaving his body in a freezer, flashes a Bible verse to a photographer in court at the Regional Justice Center in Las Vegas Tuesday, Nov. 29, 2022. (K.M. Cannon/Las Vegas Review-Journal) @KMCannonPhoto 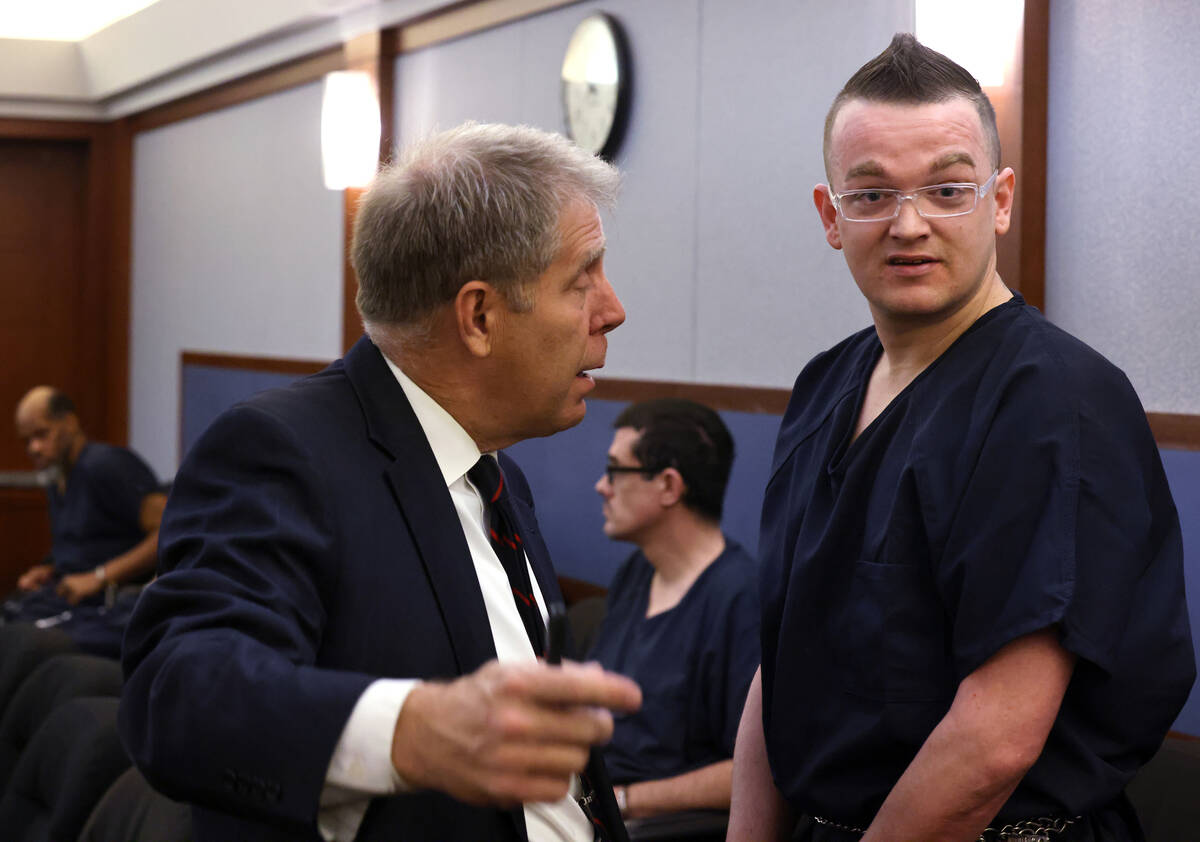 Craig Mueller, attorney for Brandon Toseland, tells his client not to argue while cameras are recording in court at the Regional Justice Center in Las Vegas on Tuesday, Nov. 29, 2022. (K.M. Cannon/Las Vegas Review-Journal) @KMCannonPhoto 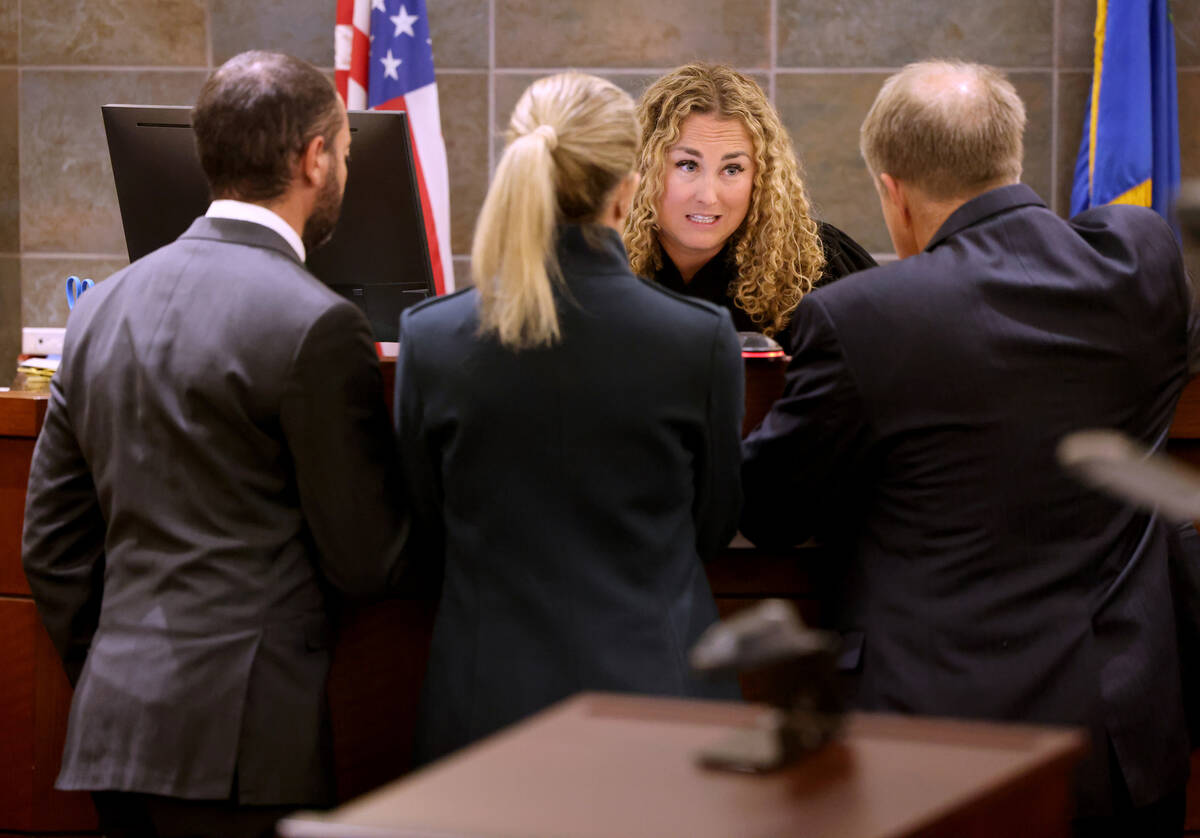 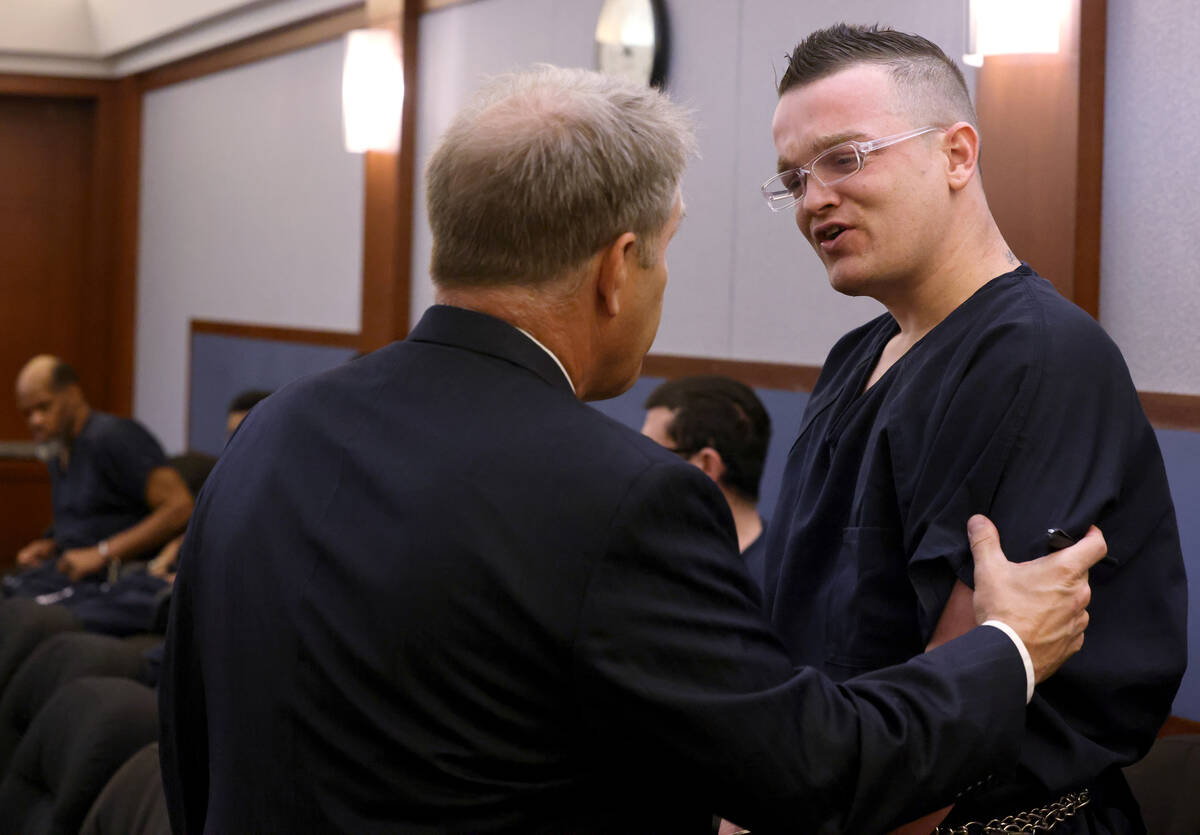 Brandon Toseland, who is accused of killing his girlfriend’s 4-year-old son and leaving his body in a freezer, talks to defense attorney Craig Mueller in court at the Regional Justice Center in Las Vegas on Tuesday, Nov. 29, 2022. (K.M. Cannon/Las Vegas Review-Journal) @KMCannonPhoto 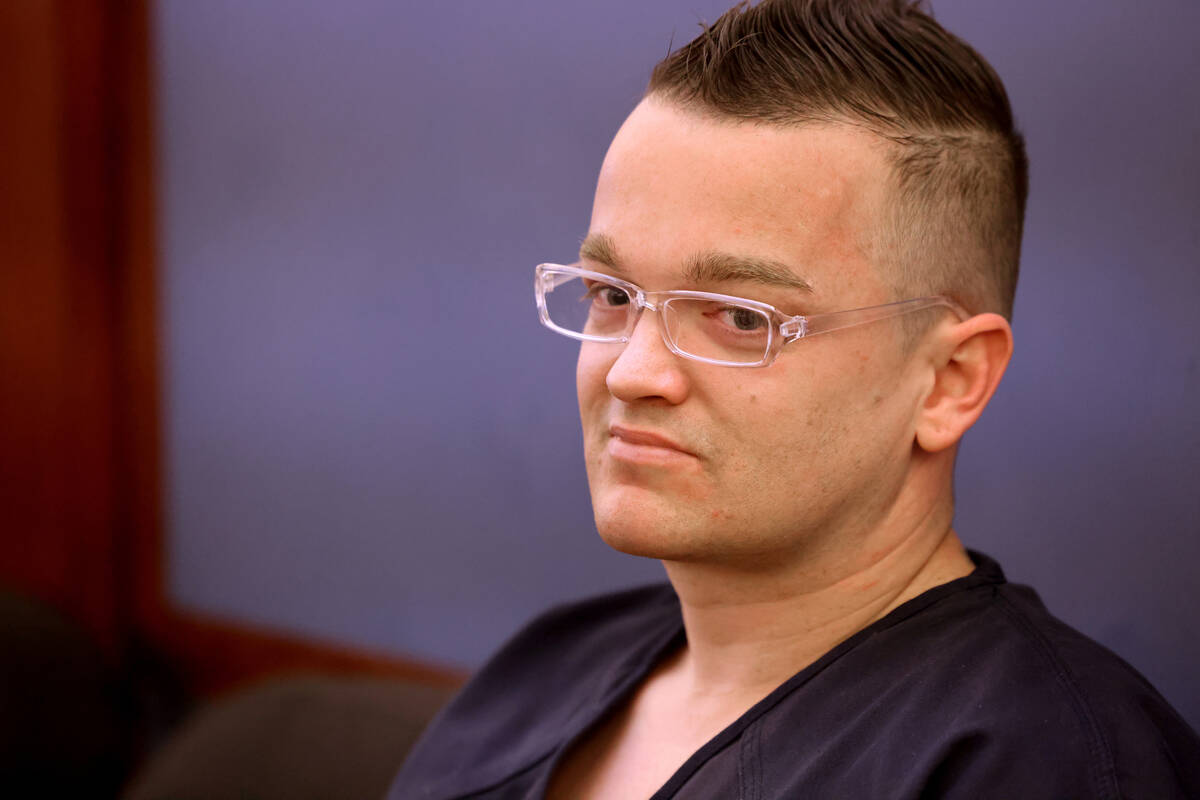 Brandon Toseland, who is accused of killing his girlfriend’s 4-year-old son and leaving his body in a freezer, waits for his court hearing at the Regional Justice Center in Las Vegas on Tuesday, Nov. 29, 2022. (K.M. Cannon/Las Vegas Review-Journal) @KMCannonPhoto 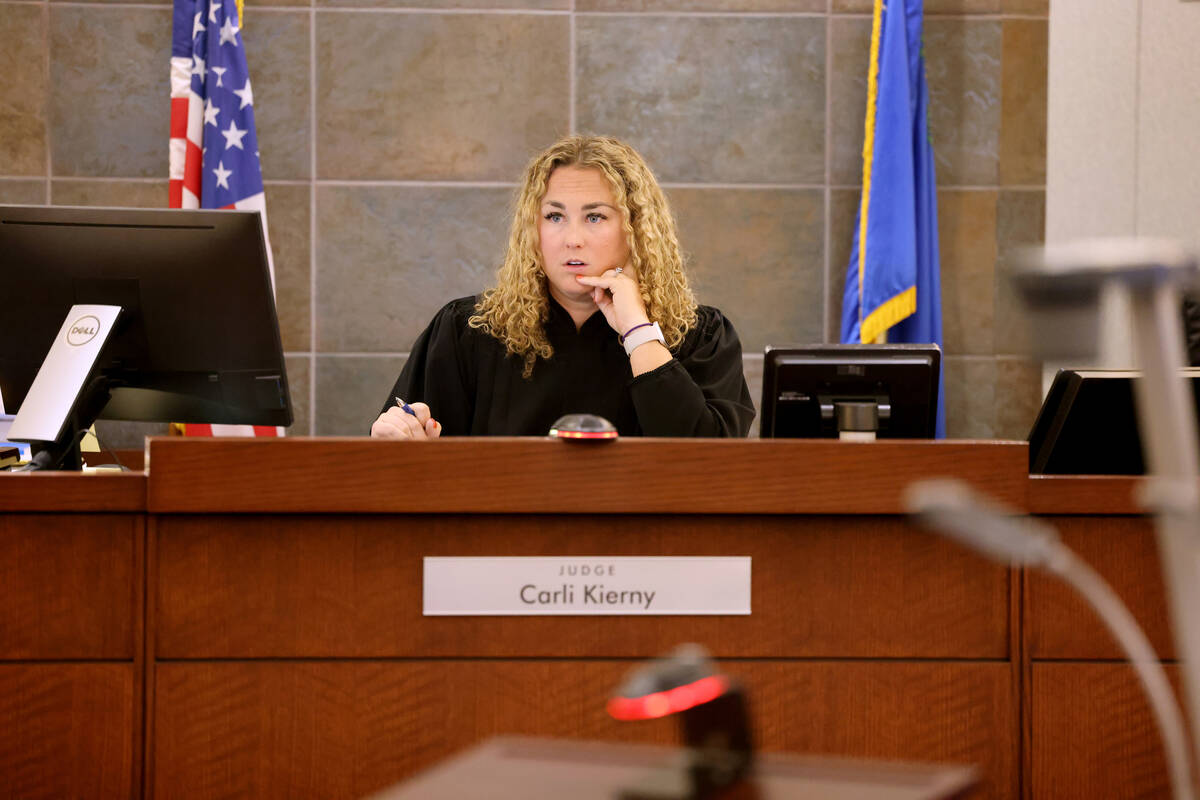 Clark County District Judge Carli Kierny presides in the case of Brandon Toseland, who is accused of killing his girlfriend’s 4-year-old son and leaving his body in a freezer, during a hearing at the Regional Justice Center in Las Vegas on Tuesday, Nov. 29, 2022. (K.M. Cannon/Las Vegas Review-Journal) @KMCannonPhoto 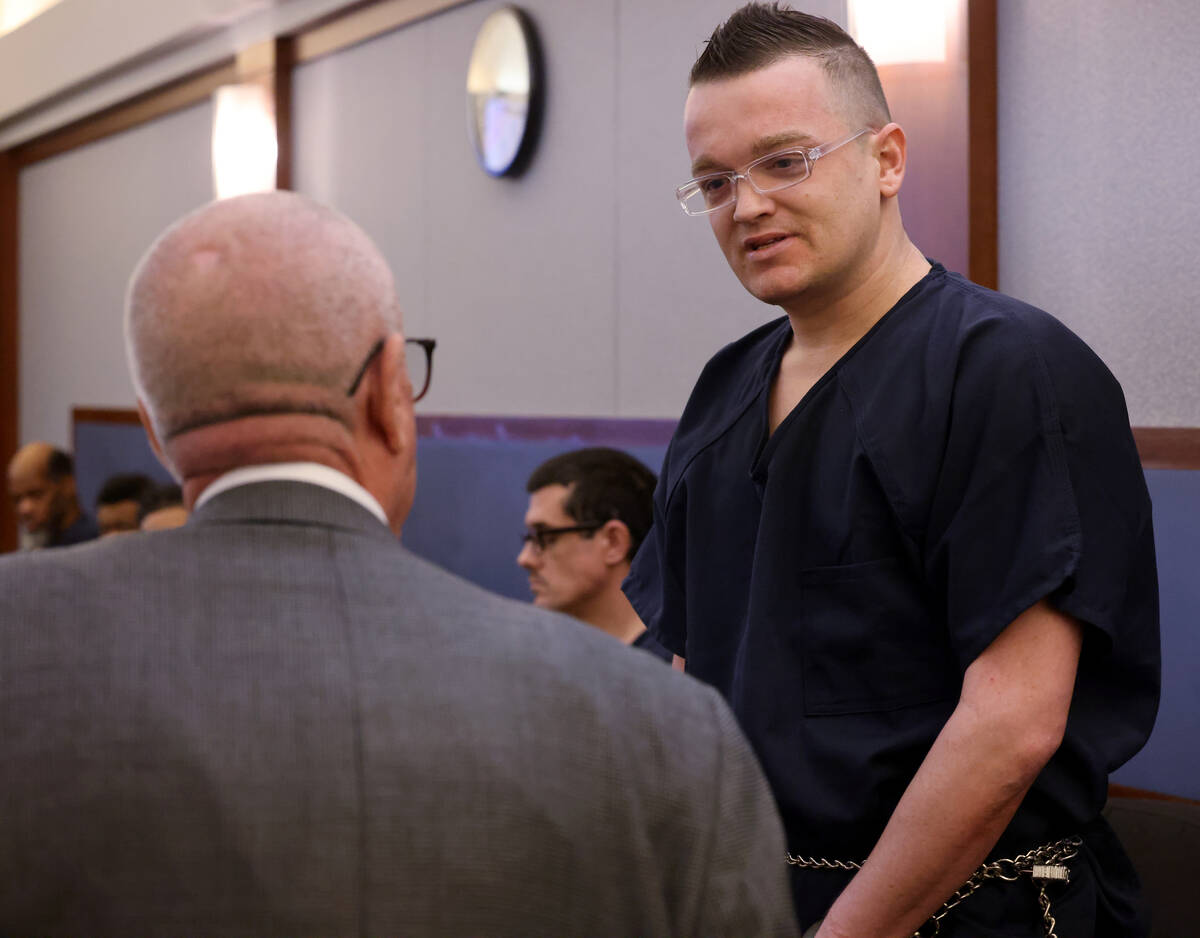 Brandon Toseland, who is accused of killing his girlfriend’s 4-year-old son and leaving his body in a freezer, talks to one of his attorneys, Lawrence Phillips, in court at the Regional Justice Center in Las Vegas on Tuesday, Nov. 29, 2022. (K.M. Cannon/Las Vegas Review-Journal) @KMCannonPhoto

Toseland, 36, is facing the death penalty in the killing of Mason Dominguez, whose body was found in a freezer at Toseland’s northeast Las Vegas home in February.

Before the hearing began Tuesday, Toseland held up his left hand, where “Psalm 3:1-8” was written in black ink. The Bible verses read, in part, “Lord, how many are my foes! How many rise up against me!”

Toseland told the judge that he had not spoken to his attorney since April.

“I would request that the court at least have Mr. Mueller come talk to me in person so I can go over different circumstances that happened during this alleged accusations as well as things going on after my arrest,” Toseland said before his attorney advised him not to talk about the facts of the case.

Kierny told Toseland that he could fire Mueller if he wished, but she could not dictate how his lawyer interacts with him. Mueller declined to comment on Toseland’s remarks following the hearing.

Toseland was indicted in April on charges of murder; child abuse, neglect or endangerment; and kidnapping a minor resulting in substantial bodily harm. He also was indicted on three counts of child abuse, neglect or endangerment resulting in substantial bodily harm; two counts of kidnapping; and two counts of battery constituting domestic violence by strangulation.

In September, a grand jury issued a superseding indictment for Toseland, charging him with two additional counts of child abuse, neglect or endangerment in connection with alleged abuse suffered by Mason’s sister.

Mason’s mother, 28-year-old Dahsia Maldonado, has said Toseland physically abused her and held her captive for months until she was able to sneak a note to school officials with her young daughter.

Maldonado has testified that Toseland took Mason into a locked bedroom in December, the last time she saw the boy.

She testified that she was confined to a bedroom for weeks and was often handcuffed when she left the house with Toseland.

After Toseland’s arrest, investigators found a hole in the backyard that police suspect was intended as a grave.

In March, Maldonado filed a wrongful death and negligence lawsuit against Toseland, who has alleged in a counterclaim that Maldonado was aware Mason had died and had decided to help Toseland “preserve” the body.

Maldonado is not facing any charges in Mason’s death. An attorney representing her family has said Maldonado denies the “fantastical claims made by Toseland.”

Toseland remained in the Clark County Detention Center on Tuesday without bail.

A status hearing in the case is scheduled for Feb. 28.