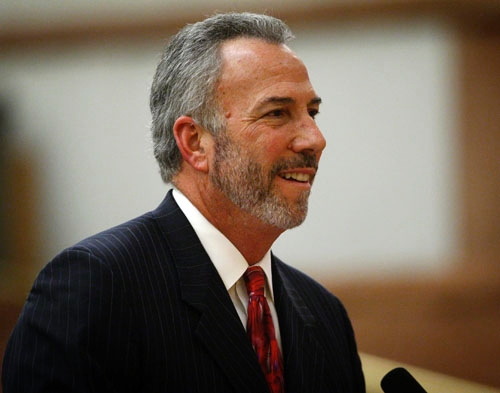 Steve Wolfson kissed his wife and grinned from ear to ear Tuesday when the Clark County Commission named him the next district attorney.

His emotions were in stark contrast to dozens of John Hunt supporters, who denounced commissioners for "having already made up their minds," being "a bunch of liars" and holding "a dog and pony show" when they cast their votes for Wolfson, 6-1.

Commissioners said they voted for him because of his legal experience.

Commissioner Lawrence Weekly was the only vote against Wolfson.

Wolfson, 57, will serve the remaining 3½ years of the unexpired term of former District Attorney David Roger. Wolfson’s start date is not set. He has said he will run for election in 2015, and he will have to give up his seat on the Las Vegas City Council.

With long faces, commissioners said they anguished over the decision, one they said they didn’t want to make, and would rather see voters decide who would be the county’s next top prosecutor. They said they’re looking into trying to change the state law that didn’t let them call a special election. Commissioners denied having already decided on Wolfson.

"To those who feel the fix is in, it’s absolutely not," Commissioner Chris Giunchigliani said. "I’m telling you the reason why our faces look like this right now: We don’t know where we’re going."

Weekly called on his colleagues to make the vote unanimous to show confidence in the next DA. He was visibly upset when commissioners did not select Hunt, a former Clark County Democratic Party chairman. Weekly disagreed, inferring his fellow commissioners had already made up their minds.

"It didn’t take a rocket scientist to see where the votes were today," he said after the two-hour meeting. "I could have pushed the green button, and where I was sitting, I saw the number of votes. There were four green votes before it was posted. I knew when I pushed my red button I was out on a limb, and that was OK. At the end of the day, I have a lot of respect for Councilman Wolfson, but I represent the folks in District D, and I did what they asked me to do."

The other finalist was Drew Christensen, county director of appointed counsel. Neither Hunt nor Christensen could be reached for comment.

Commissioner Tom Collins said he had "hurt in my heart," and he "disappointed a lot of constituents" in voting for Wolfson, a decision he thought would be that call of solidarity Weekly wanted.

That didn’t stop an emotional Wolfson from thanking commissioners for placing their confidence in him.

Surrounded by media peppering him with questions, Wolfson said his first priority is to work on morale in the office by communicating with his employees.

"They’ve been craving a new leader," he said.

Some in the legal community have criticized Wolfson as being aloof. He acknowledged to commissioners last week that he might be "a little" arrogant but that he can bring confidence to the office.

Wolfson said he will be "an active district attorney" when it comes to participating in the coroner’s inquest process by including a representative from his office to investigate fatal police shootings.

That didn’t sit well with Chris Collins, executive director of the Las Vegas Police Protective Association, who added that Wolfson would "do a fine job" in his new position.

"No offense to any district attorneys. They’re great attorneys, but they’re not homicide investigators," said Collins, whose union represents police officers. "I don’t think they’ll have anything to offer out there."

Former DA Roger is now general counsel for the police union, which has opposed recent changes in the coroner’s inquest process.

Wolfson said he also will focus on improving other areas of the office, including the family division. In his presentation to commissioners last week, he said he would seek the death penalty less often and only "in the worst of the worst" cases, investigate the possibility of a night court, and push to collect millions of dollars’ worth of back child support owed to the county.

The district attorney manages a $65 million budget and more than 700 employees, including 150 deputy district attorneys who handle about 65,000 cases annually. The job pays $182,100 a year.

Wolfson served as a county prosecutor and in the U.S. attorney’s office before settling into private practice in 1987.

He graduated with a law degree in 1980 from the California Western School of Law in San Diego. He was admitted to the state bar in 1981 and also is licensed to practice law in California.

"We all want the same thing, for the system to be fair and efficient," he said in an interview this month.