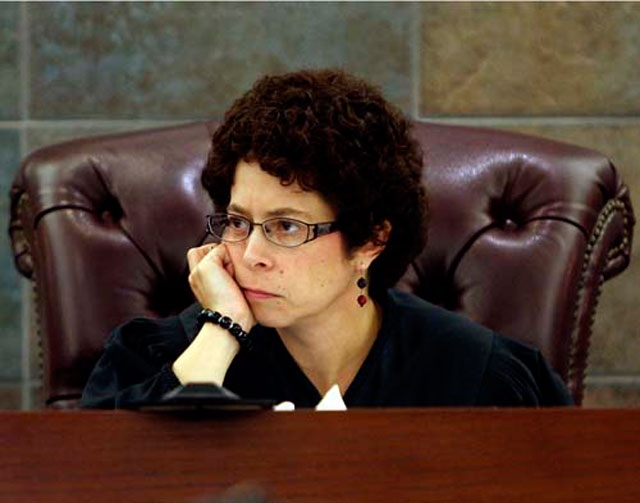 Judge Elissa Cadish watches from the bench in this 2010 file photo. Cadish withdrew from consideration for a federal court position on Friday.

WASHINGTON — Elissa Cadish, a Clark County judge whose promotion to the federal bench hit an impasse over gun rights, has withdrawn from consideration to become a district judge in Nevada.

“It is with regret that I write to inform you that I have requested that President Obama withdraw my nomination to this position at this time,” Cadish said in a letter sent Thursday to Nevada’s senators and made public on Friday.

Cadish’s nomination had been tied up for more than a year after she was nominated by President Barack Obama in February 2012. She said the delay in her case, with two other vacancies in the seven-judge Nevada district, was affecting justice.

Moreover, as an elected judge in Clark County District Court, Cadish, 48, said she needed soon to start forming her campaign for re-election in 2014, which would have been impossible under conduct code if her nomination to a federal post remained pending.

The situation “has severely impacted the ability of Nevadans to get speedy justice, particularly in civil cases,” Cadish said. “Additionally it has put a weighty burden on the four sitting district judges as well as the senior judges who graciously continue to serve the court.”

“By withdrawing my nomination I am hopeful that there will be a speedy nomination and confirmation process for a new candidate in order to get that court up to its full complement of judges to the benefit of all citizens of Nevada,” Cadish said in the letter to Sens. Harry Reid, D-Nev., and Dean Heller, R-Nev.

Cadish declined to comment further, according to her courthouse secretary in Las Vegas.

The Cadish nomination was a sore spot between Reid, who had promoted her nomination, and Heller, who blocked her consideration by the Senate Judiciary Committee after questions were raised last year about her views on gun rights.

Reid said last month he and Heller were trying to work out a solution on Cadish. The senators and their representatives were tight-lipped on Friday, and it was unclear whether Cadish’s withdrawal was the result of an agreement between them, or signaled anything about how other judicial nominations will be handled.

“Elissa Cadish is one of the most highly respected jurists in Nevada,” Reid said in a statement. “I continue to have deep admiration for her and appreciate her patience and grace in this process. I am disappointed in this outcome. However, I agree with Judge Cadish that with three vacancies on our district court, Nevada is in an urgent situation and continuing this impasse is not beneficial to our citizens who warrant a speedy judicial process.”

“While I agree with the withdrawal of this nomination, this has been an unfortunate situation from the very beginning and I wish Judge Cadish well in her future endeavors,” Heller said in a statement. “I look forward to working with Senator Reid so that we can avoid similar situations and move swiftly to confirm future nominees.”

Cadish, a Clark County judge since 2007, was well-regarded locally, with
88 percent of lawyers responding to a 2011 evaluation saying she should be retained. The American Bar Association rated her “unanimously qualified” for a federal judgeship.

But her nomination came off the rails a month after she was nominated. Republicans discovered a questionnaire she filled out in May 2008 for a Las Vegas conservative citizens group in which she said she believed “reasonable restrictions may be imposed on gun ownership in the interest of public safety.”

Asked by the group whether she believed individuals have a constitutional right to keep and bear arms, Cadish wrote: “I do not believe that there is this constitutional right.” She added: “Of course, I will enforce the laws as they exist as a judge.”

Cadish moved to clarify her comments, saying she was not speaking for herself but reflected the unsettled law on gun rights before the Supreme Court issued rulings on the Second Amendment that made clear an individual’s right to gun ownership.

Heller blocked her confirmation, saying at the time, “The bottom line is that she filled out a questionnaire that says she doesn’t believe the right to bear arms is a constitutional right for an individual. I just disagree with that.”

Heller’s move was applauded by the National Rifle Association, which said Cadish’s position “was of little comfort to gun owners.”

The issue continues to resonate among conservatives. Last month, the Republican audience at a Lincoln Day Dinner in Pahrump applauded when Heller told them he was continuing to block Cadish.

“There is a judge in Las Vegas who I will not release because she said in her statement she doesn’t believe the Second Amendment guarantees a person a right to bear arms,” Heller said, according to a transcript of his speech. “And I haven’t released that nomination at this point. So your Second Amendment is as important to me as it is to you.”

People for the American Way, the liberal interest group, on Friday accused Republicans and “the gun lobby” of keeping Cadish off the federal bench.

Marge Baker, the group’s executive vice president, associated Cadish with Caitlin Halligan, a New York lawyer whom Republican senators blocked this week from a judgeship on the U.S. Circuit Court of Appeals for the District of Columbia.

“Senate Republicans and the gun lobby have worked hand in hand to keep these two exceptionally qualified women off the federal bench,” Baker said. “Neither Cadish nor Halligan has displayed character or ethics problems let alone any sort of extreme ideology like that they were accused of. Yet Halligan was never allowed an up-or-down vote from the Senate, and Cadish never even had the opportunity to answer senators’ questions on her record before the Judiciary Committee.”

When Heller was elected in November and made clear he was not going to change his mind, the writing was on the wall for Cadish, according to Carl Tobias, a law professor at the University of Richmond and a former UNLV professor who still follows Nevada matters.

“As long as Heller wasn’t going to (agree), it couldn’t happen, and so I think she was gracious by choosing now to withdraw because the percentages just weren’t there,” Tobias said. “She needs to move on too if she’s going to campaign. There just didn’t seem to be a path.”

In the meantime, the impasse over Cadish, with other vacancies, caused concern about the Nevada District Court.

In March 2012, two vacancies on the federal bench were declared “judicial emergencies” by the Administrative Office of the U.S. Courts based on the district’s caseload.

The designation was removed later in the year when the number of weighted filings dropped below what was considered emergency levels.

Still, Nevada ranks 31 among 94 judicial districts measured by weighted filings, which the government uses to determine workload, and 20th for pending cases per judgeship.

Help is on the way. The Senate is expected Monday to confirm Andrew Patrick Gordon, a partner at the McDonald, Carano and Wilson LLP in Las Vegas, to a Nevada judgeship.

A third Obama nominee, Las Vegas attorney Jennifer Dorsey of Kemp, Jones & Coulthard LLP, remains up in the air as Heller has not given permission for the Senate Judiciary Committee to hold a confirmation hearing on her. Aides say he continues to study her.

Dorsey and Gordon were nominated on the same day, Sept. 19. While Gordon’s confirmation is all but complete, Heller has not indicated what if anything has caused a protracted review of Dorsey’s credentials or whether he has spotted a problem with her nomination.