RJ App
Vegas News, Alerts, ePaper
OPEN
Nicole Beck, the widow of Metro Officer Alyn Beck, walks with her daughter Katriann, 6, before placing a rose in the front of the stage at the Southern Nevada Law Enforcement Officers memorial service at Police Memorial Park on May 23 in Las Vegas. (Rachel Aston/Las Vegas Review-Journal) 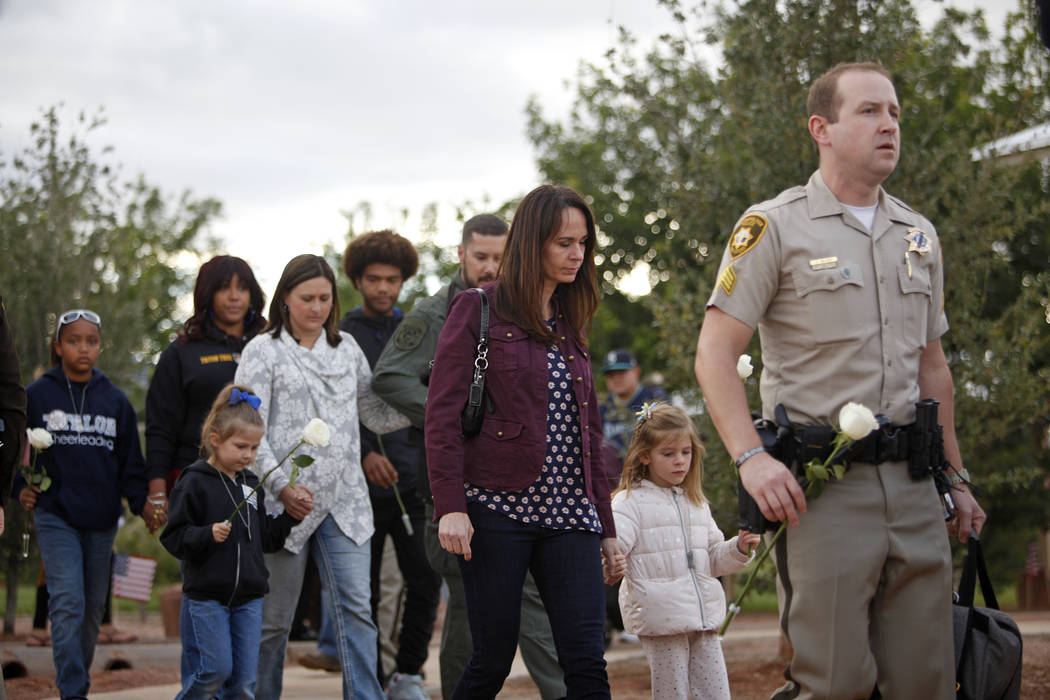 Nicole Beck, the widow of Las Vegas police officer Alyn Beck, walks with her daughter Katriann, 5, before placing a rose in the front of the stage at the Southern Nevada Law Enforcement Officers memorial service at Police Memorial Park in Las Vegas on May 23, 2019. (Rachel Aston/Las Vegas Review-Journal) @rookie__rae 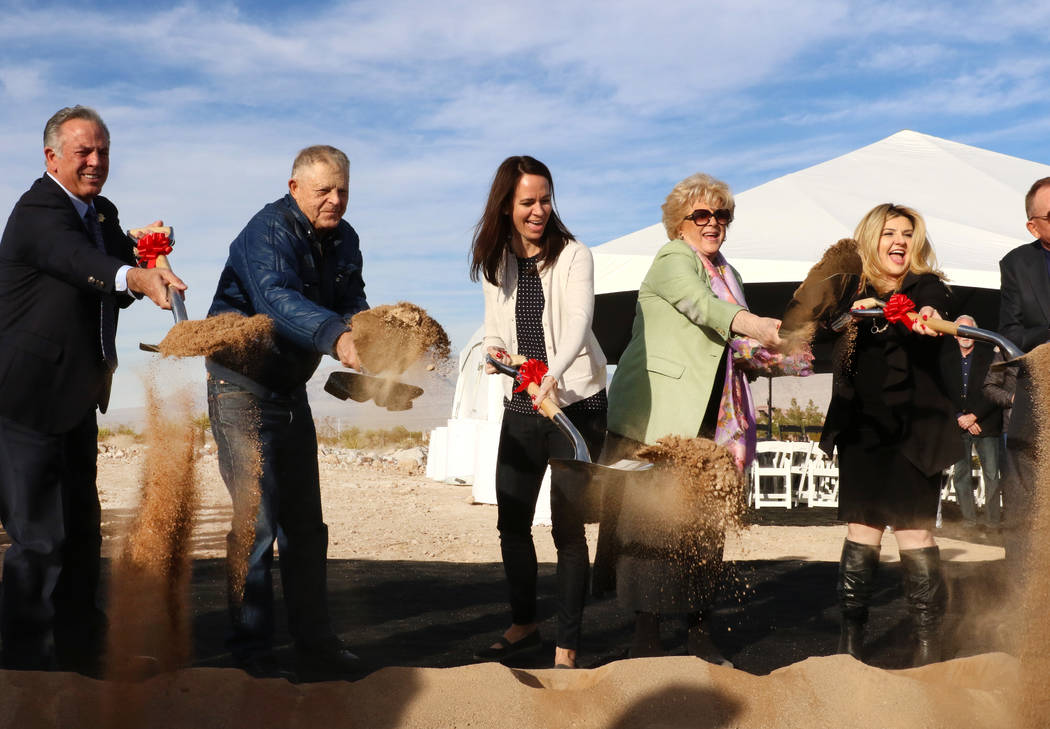 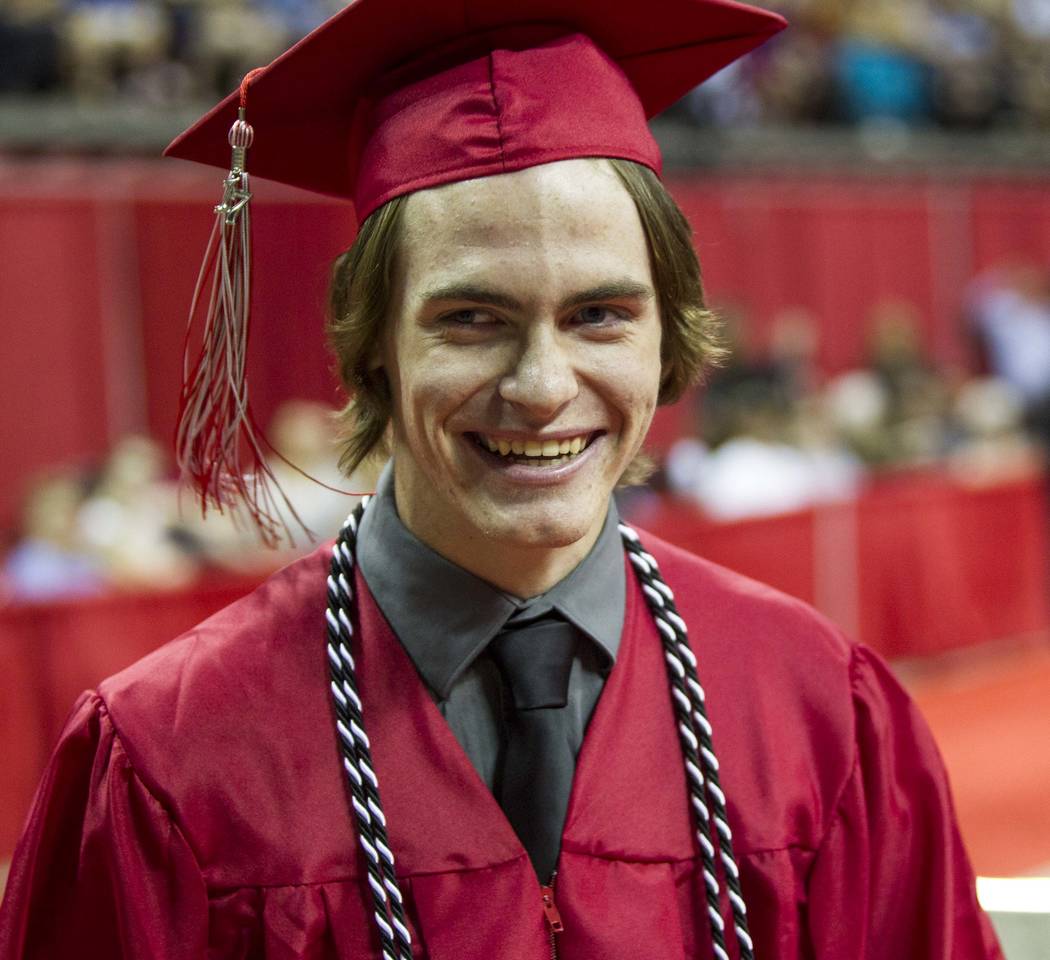 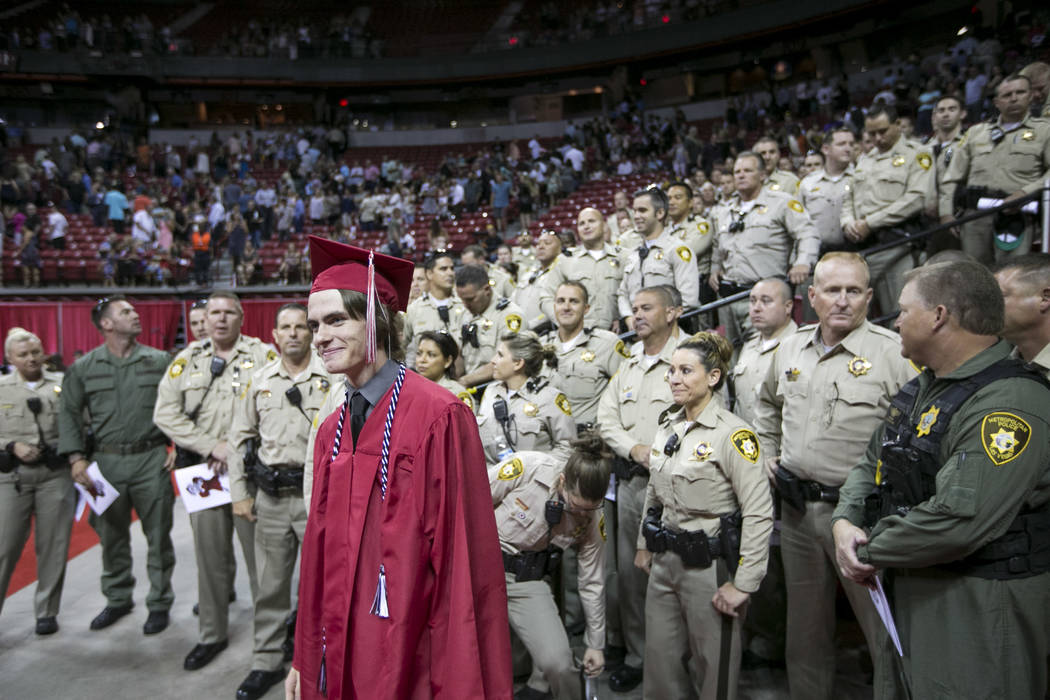 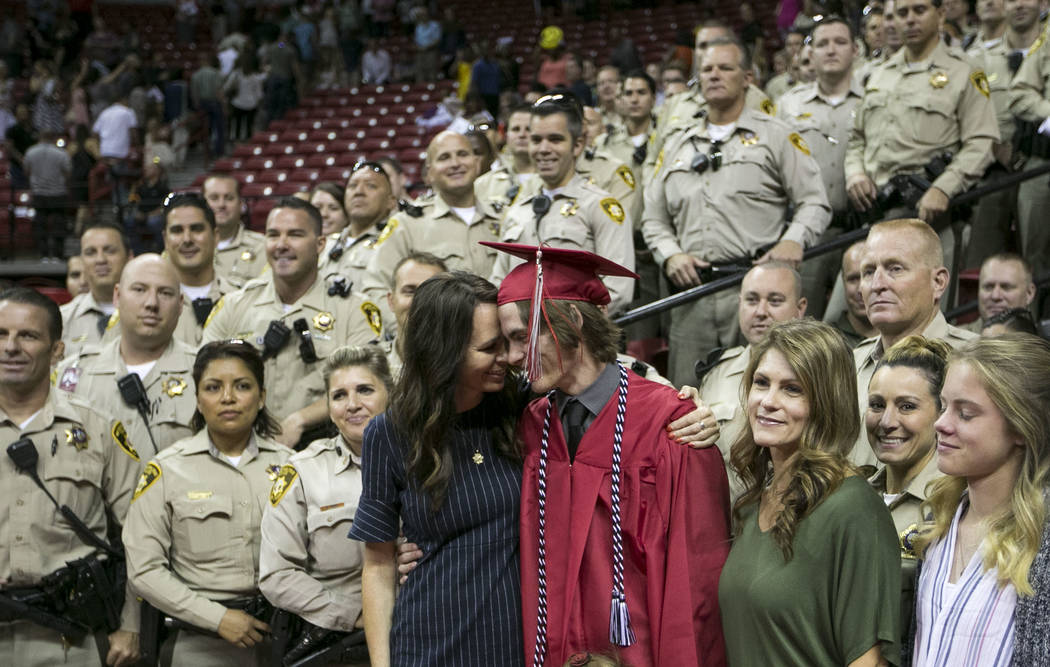 Daxton Beck gets a hug from his mother, Nicole, as they gather for a photo with a group of Las Vegas police officers following his graduation ceremony at the Thomas & Mack Center on June 10, 2017, in Las Vegas. (Richard Brian/Las Vegas Review-Journal via AP) 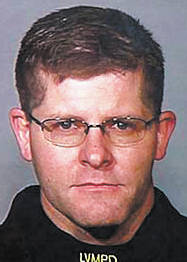 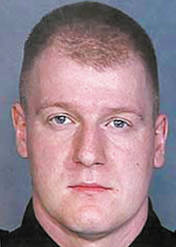 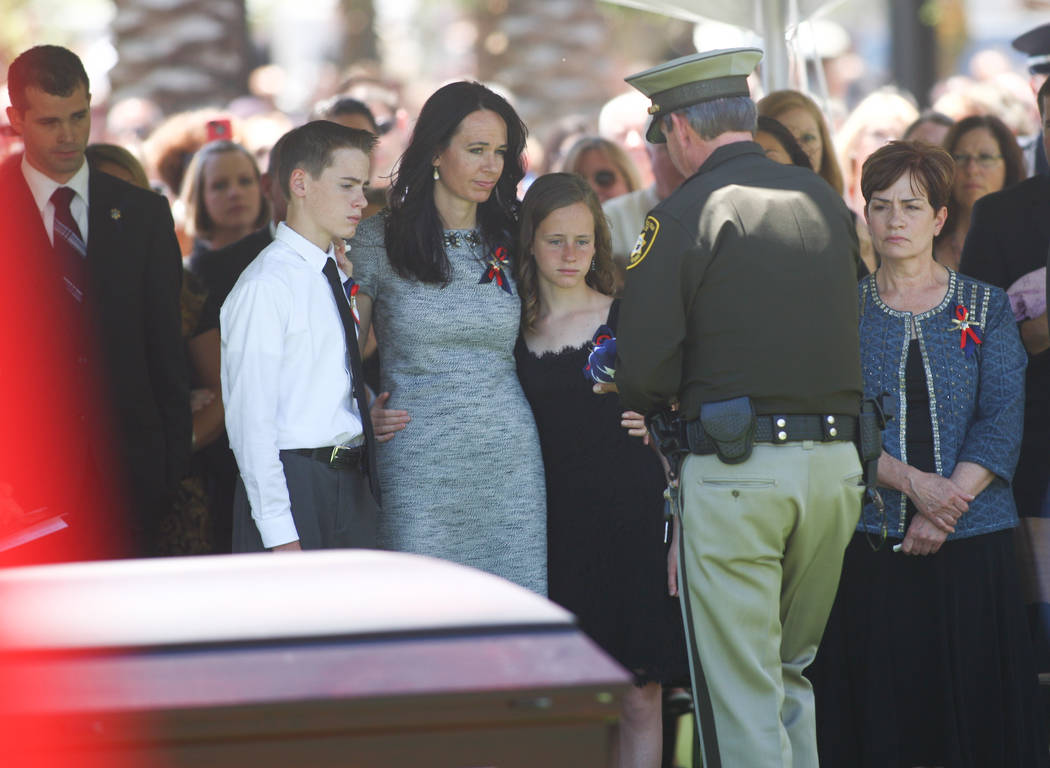 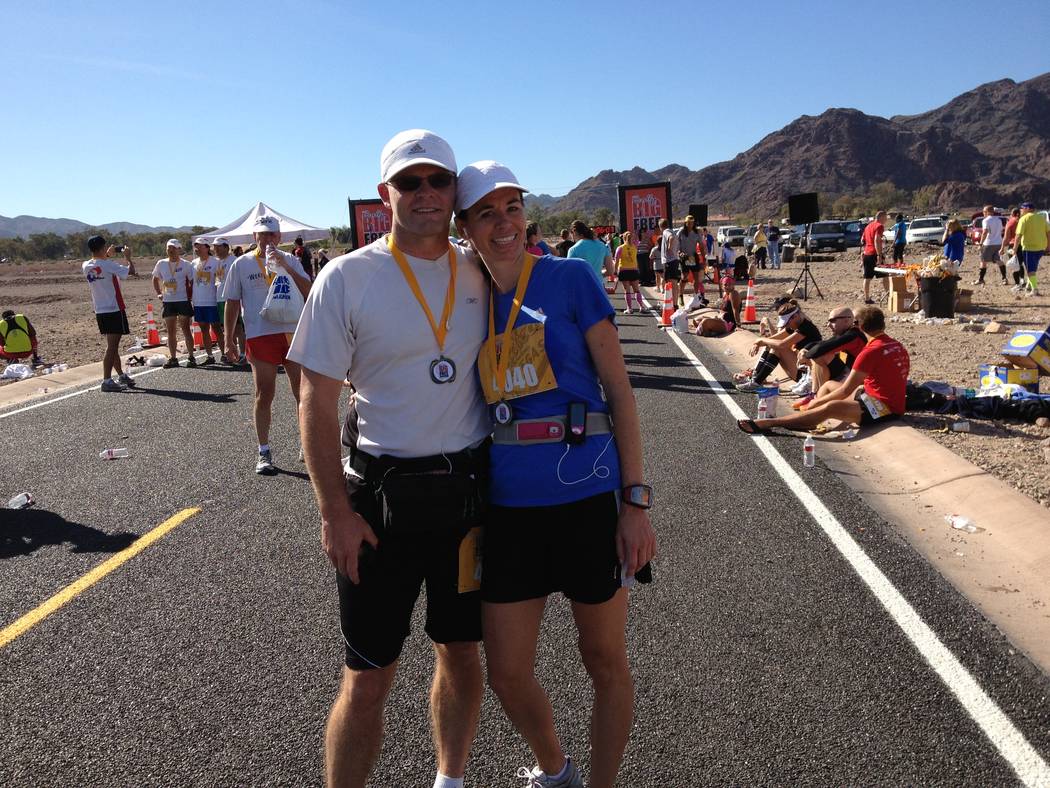 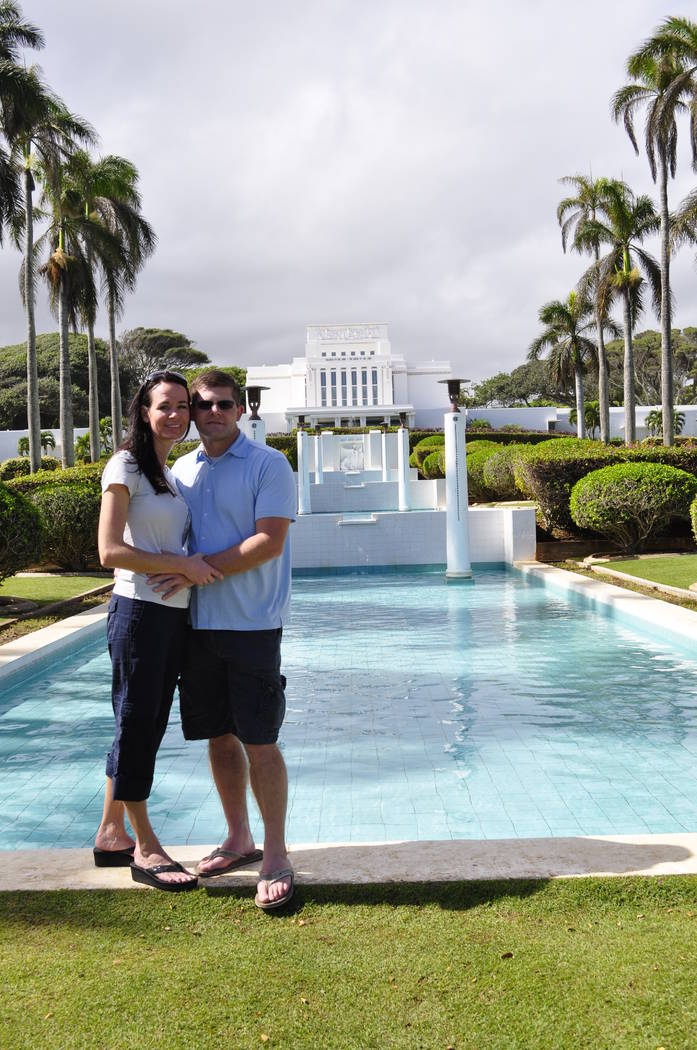 When Nicole Beck picked up her phone after church services nearly five years ago, a quick glance turned into a long, confused stare.

The mother of three had been visiting family in San Francisco with her children. Her husband, Las Vegas police officer Alyn Beck, had stayed home to study for his sergeant’s test. They missed him, but church had made it a relatively pleasant morning in the Bay Area.

Now, though, in her relative’s home, her eyes darted up and down her phone screen as her fingers flipped through a flood of notifications. They were all about Alyn.

Daxton, her oldest child, wondered what was going on. Nicole Beck stepped into a private room to make a call. The boy, 14 at the time, waited with his sisters until their mother emerged with news that had already made national headlines: There had been a shooting at a Cicis Pizza in Las Vegas. Alyn Beck and his partner, Igor Soldo, were dead.

“There was disbelief, and then immediate grief,” Daxton Beck, now 19, told the Las Vegas Review-Journal in a phone interview ahead of the fifth anniversary of his father’s death.

It was the first time the teen has talked about it publicly. Through relatives, Nicole Beck declined an interview. Her sister-in-law noted that this time of year “is always really difficult for her.” 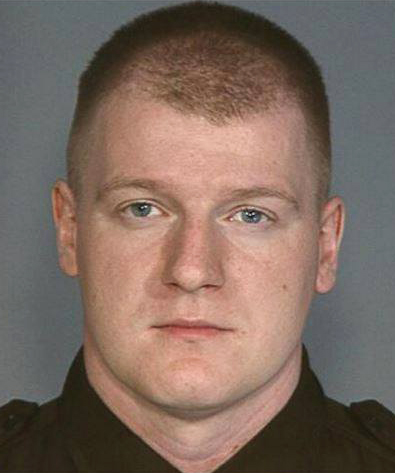 The June 8, 2014, shooting came at the hands of a young married couple who held anti-government and anti-law-enforcement views, police have said. Patrol officers Beck and Soldo were on a lunch break when their killers walked into the northeast valley restaurant and opened fire.

Soldo, 31, was shot in the back of the head. Beck, 41, tried to “engage,” police said, but he was shot several times before he could. The couple then laid a Gadsden flag — a yellow banner with a coiled snake above the words “Don’t Tread on Me” — on Beck’s body and declared a revolution. 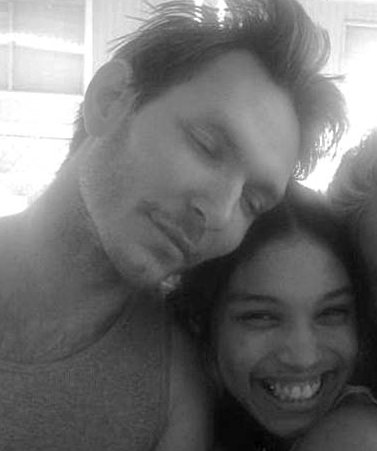 Armed with the officers’ handguns, the couple walked over to a nearby Walmart, shooting and killing armed civilian Joseph Wilcox, 31, who tried to stop the husband but did not notice the wife. In a shootout with police inside the store, the husband was killed. Wounded, the wife shot herself and later died at a hospital.

The last time Daxton Beck saw his dad was the day Nicole Beck, Daxton and his sisters — now 16 and 5 — left for San Francisco. As they pulled away, Alyn Beck waved goodbye, the garage door slowly closing until he disappeared from view.

“We were as close as a dad and son can be,” Daxton Beck said.

At Daxton’s 2017 high school graduation, 150 uniformed officers stood in for his father to surprise and support the teen, who is now an ordained elder with The Church of Jesus Christ of Latter-day Saints and currently serving a mission in Colorado.

It was one of the many ways the Metropolitan Police Department has supported the family since Beck’s death.

“It’s not just this event, but anything in the future as well, whether it’s weddings or college graduation or anything else,” Metro officer Scott Nicholas told the Review-Journal that day. “We just want him to know that his dad was important to us.”

Daxton Beck gets a hug from his mother Nicole Beck as they gather for a photo with a group of Metro Officers following his high school graduation ceremony at the Thomas & Mack Center in June 2017. (Review-Journal file)

Attempts to reach Soldo’s family for this story were unsuccessful. He was survived by his wife and son, who will turn 6 in July, along with his parents, siblings and extended family.

A remembrance page on the Metro website still describes Soldo as a well-traveled, private person and voracious reader.

Alyn Beck also was close with his own father, Ronnie Beck.

Growing up in Wyoming, Alyn Beck showed an early interest in law enforcement, his father said. In college, where he met Nicole, he worked jobs at construction sites until he heard that a police department in Las Vegas was hiring.

He joined Metro in 2001. Ronnie Beck was there for his son’s pinning ceremony.

“I was quite excited that he could achieve that, because it’s quite an honor,” the father said.

Alyn Beck started as a patrol officer and then became a trainer. According to Metro’s remembrance page, he served as a “tough and tenacious” instructor for about seven years. He decided to return to patrol the year he was killed.

“He really liked to work amongst the people,” his father said.

Throughout Alyn Beck’s time as an officer, Ronnie Beck never worried about any added risk to his son’s safety.

“I didn’t have any concern at all with it. We just trusted him,” the elder Beck said. “Because a person can get run over crossing the street. It’s just the way that life goes.”

Alyn Beck’s death came four years before the sudden death of his mother, Ruth Beck. She was killed in March when the driver of a semitrailer crossed a median in Wyoming and tore into the passenger side of her and Ronnie Beck’s car. The two were headed to another son’s home.

“It was so strange,” said Ronnie Beck, who was driving. “My hand got cut a little bit and that’s all.”

The death of his son and the recent death of his wife have been curveballs, he said, among other losses. As the survivor of a heart attack and later a heart transplant, Ronnie Beck always thought he would be “the first to go.”

“But these things happen,” he told the Review-Journal on the phone from his quiet Wyoming home, remaining largely positive. “That’s the way life is.”

“At least that’s my opinion,” he continued. “You just learn to roll with it and do what you can and try to lift somebody up if you can. I think that is so important in life. There is always somebody out there that needs a helping hand.”

A family photo of Alyn and Nicole Beck with their children. From left: Daxton, Alyn, Katriann (baby), Nicole and Avenlee. (Courtesy Ryan Dennett)

Alyn Beck was always quick to do that, his father said. His life was rooted in his faith and his family.

Daxton Beck said his dad was good at “identifying the needs of others.”

His father’s principles have guided Daxton Beck’s decisions in the nearly five years he’s lived without him. But he wishes he could sit down with his dad and get his thoughts on things.

He hopes people realize how important it is to try and remain close with family.

“Not because you never know what’s going to happen, but because if you stay close, it doesn’t matter what happens,” the son said.

Last month, 10 officers’ children were awarded $5,000 scholarships in honor of Alyn Beck and Igor Soldo. After the awards, Las Vegas police hosted the annual Southern Nevada Law Enforcement Memorial ceremony around sunset, which remembered all fallen officers in the region, including Beck and Soldo.

Nicole Beck and her youngest daughter, Katriann, attended. The little girl held a single white rose in honor of her dad.